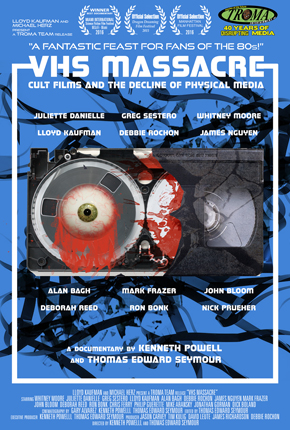 Future generations will need to have the concept of video stores explained to them. Many young children already don’t know what they are. That’s kind of sad. Technology made instant streaming of movies possible, thereby rendering video stores obsolete. It’s easier to push a button to get a movie than it is to hop in your car, drive across town, and spend twenty minutes browsing shelves. Still, there was a sense of discovery when you entered a video store that no streaming platform can replicate. The demise of those stores, and of the VHS format in general, has had a profound negative effect on independently-made genre/exploitation films, which thrived under the past rental model. VHS MASSACRE — available on Troma’s streaming service, Troma Now — looks at this unfortunate side effect. 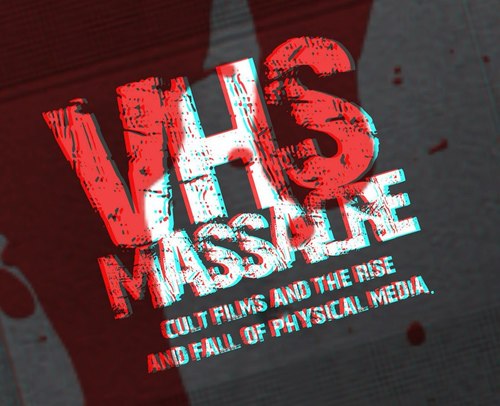 The documentary, directed by Kenneth Powell and Thomas Edward Seymour, takes you on a fairly thorough tour of VHS history. Starting in the 1980s, public desire to rent movies on VHS led to the proliferation of stores renting tapes. As the film points out, anybody could easily open a video store, or add one to their already existing business. (As a teen, I rented all my movies from the surprisingly large video section of a local carpet and flooring store.) Demand for product was incredibly high. 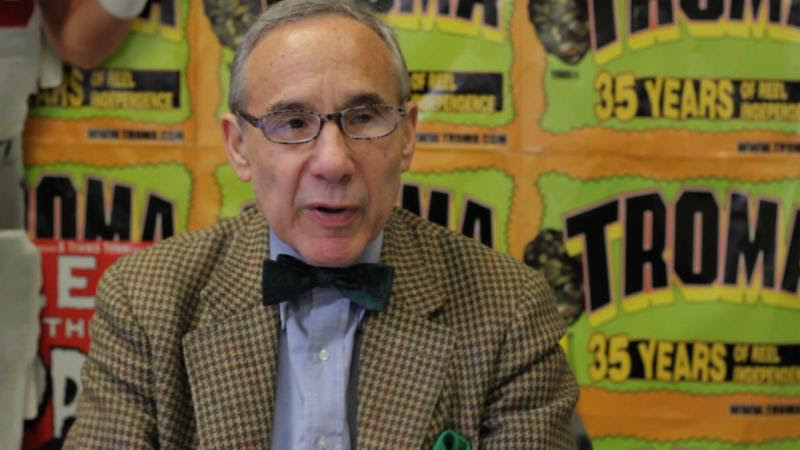 Perhaps the primary beneficiaries of that demand were genre and exploitation pictures. Whereas these films could never compete with major Hollywood releases in cinemas, video stores leveled the playing field. A customer walking in could peruse all the boxes before choosing. For this very reason, genre fare tended to rely on outrageous, attention-grabbing artwork. VHS MASSACRE points out that such all-important “title discovery” is now gone. Current methods of streaming don’t allow you to pick up the box, hold it in your hands, or read the back. That ability to get a “feel” for a movie has vanished. These days, you only get a small graphic on a menu flooded with them. 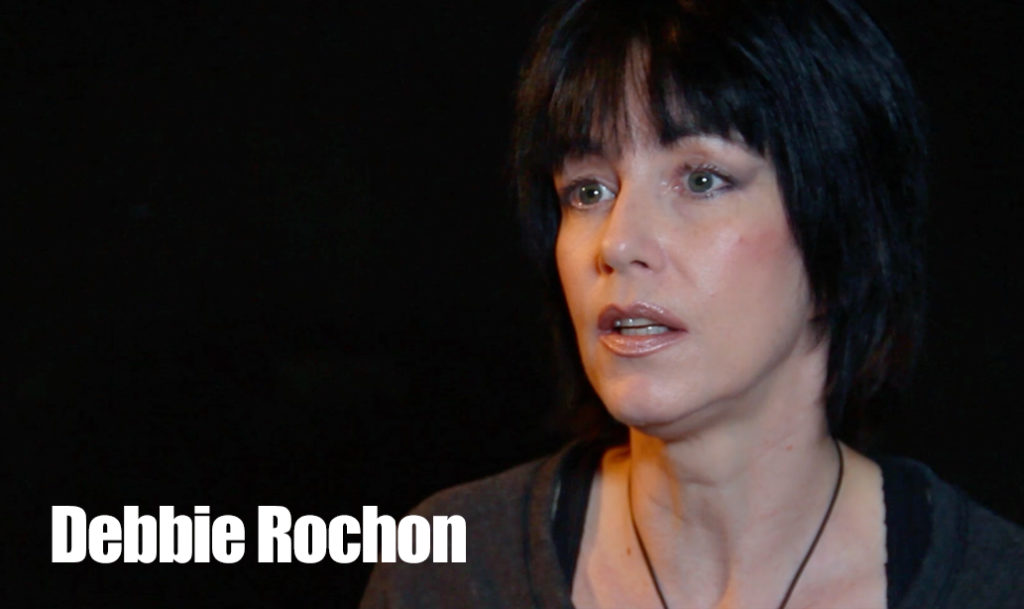 Powell and Seymour take a methodical step-by-step look at how each new emerging viewing technology took a toll on genre films. Many of the movies were low-budget and had lesser production values. That worked wonderfully on VHS, but the picture and sound quality of DVD/Blu-ray discs emphasized such limitations. Torrents and other forms of piracy rendered it extremely difficult for filmmakers to profit off their indies. Netflix, which could have been the savior of exploitation cinema, screwed over a lot of smaller companies with bad deals – or no deals at all. Troma head Lloyd Kaufman appears on camera to explain how Netflix has had an inexplicable long-term bias against his company. Only though backdoor means has he been able to make some of Troma’s movies available on the streaming service. A number of other B-movie luminaries – including film critic Joe Bob Briggs, actress Debbie Rochon, and actor/producer Carmine Capobianco – are also interviewed, each of them offering insight into how the game has changed for the worse over the last decade. 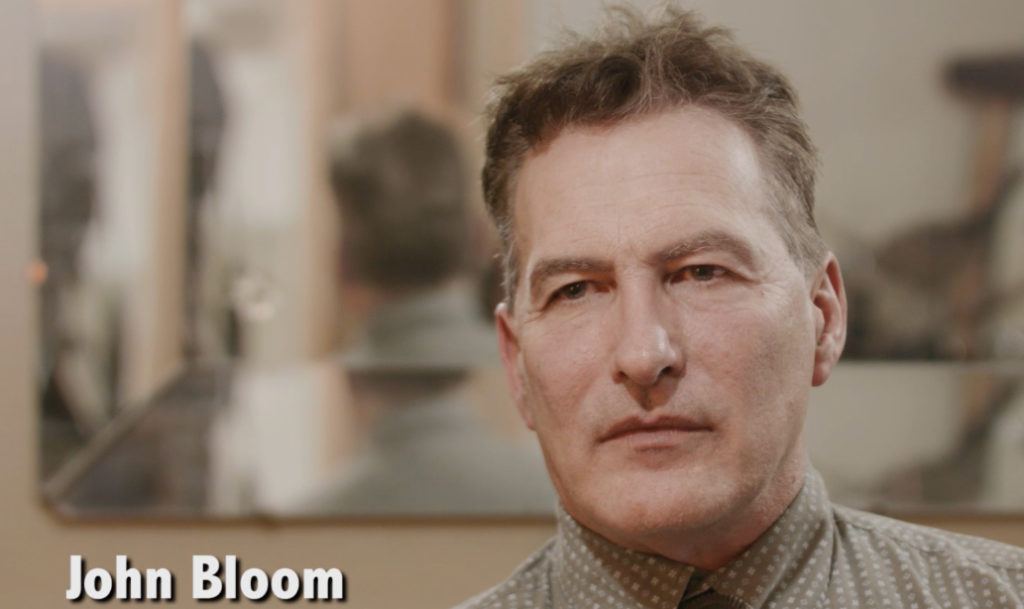 VHS MASSACRE openly longs for the days of the VHS cassette and the video store that rented it, as do its commentators. Among everything else it does, the documentary additionally follows the hosts of the New York Cine podcast as they stage a competition to see who can find the weirdest, worst VHS tape. They visit a few remaining video stores (which are in pathetic condition) looking for contenders. Through these sections, it is made clear that the communal/personal aspect of video stores is gone. You can no longer rely on an employee behind the counter learning your idiosyncratic personal taste and recommending movies that are off the beaten path. 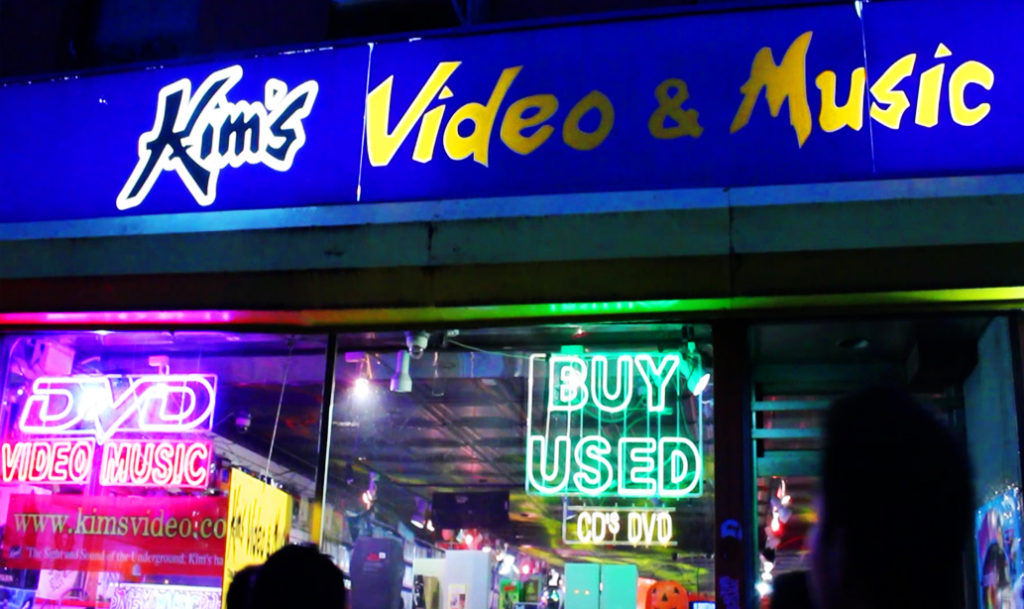 In spite of it all, the documentary does offer a ray of hope, opining that YouTube might just be the thing that allows genre and exploitation fare to thrive again. YouTube is, after all, a place where people go to discover independently-produced entertainment, yet it’s one where creators can still get paid for their work through ad revenue and channel subscriptions. Whether this will come to pass remains to be seen. That little bit of optimism is certainly welcome, though.

On the downside, the filmmaking here is pretty shaky. Powell and Seymour jump from one topic to another, often haphazardly. They have trouble organizing their film’s information, and transitions from one section to the next are awkwardly handled. VHS MASSACRE really would have benefited from some extra care in shaping the way it addresses all the material it attempts to cover. In spite of that flaw, the interviewees offer substantive insight that holds your attention. The documentary’s passion for VHS and genre cinema also helps it ride over the rough spots. 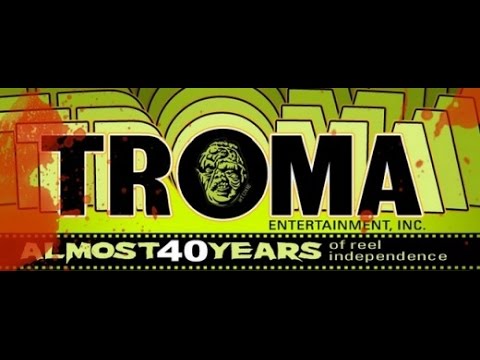 Even though it wasn’t the greatest format from a technical perspective, a lot of people fell in love with a lot of genre and exploitation movies on VHS, thereby making the format an integral part of their personal experience. It paved the way for filmmakers who wanted to tackle unconventional subject matter or to approach things in a non-mainstream way.

VHS MASSACRE, likes the films it celebrates, has more than a few seams showing. Also like them, you can feel and appreciate the enthusiasm that went into making it.