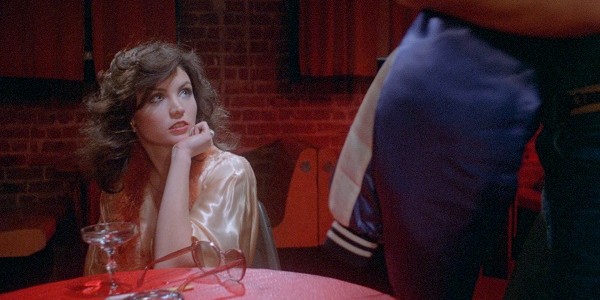 Chris Warfield was a film and television actor who was mostly active in the 1950s and 1960s, when he appeared in such series as Perry Mason, The Outer Limits, and Lassie, and films including DANGEROUS CHARTER (1962) and DIARY OF A MADMAN (1963). He began producing films in the late ’60s, and directed just over a dozen features in the ’70s and ’80s, working in both softcore and hardcore adult films. Vinegar Syndrome previously released two of Warfield’s features in a Peekarama double-feature disc that has been one of the highlights of that line so far: PURELY PHYSICAL (1982) and CATHOUSE FEVER (1984). Now they have released another of Warfield’s hardcore features as a standalone disc, 1980’s CHAMPAGNE FOR BREAKFAST. The film looks great, but how does it compare to the films on the Peekarama disc?

Champagne (Leslie Bovee) works in marketing at a cosmetics company, and as the film opens she gets an impressive promotion. Her co-worker Peggy (Bonnie Holiday) is obviously jealous, and takes a moment to make Champagne uncomfortable by forcing one of her male clients to service her on the board room table, encouraging Champagne to make the most of her new position. Instead, Champagne decides to take a couple of weeks off, and contacts a temp agency run by Gladys (Kay Parker) to hire a bodyguard. Harry (John Leslie), a very traditional macho man, bails on a job interview where he is tricked into a threesome by “a couple of lesbians” (Kandi Barbour and Dorothy LeMay), and happens to walk in on Gladys taking the call for Champagne’s bodyguard. After some lively coaxing (i.e. sex on Gladys’s desk), Harry convinces Gladys to send him in for the interview, but there’s a hook: Champagne wants a *gay* bodyguard.

With a little extra swish in his walk and a light lisp, Harry nails the interview and soon is on the job chauffeuring Champagne around San Francisco to various trysts, then providing her with deep tissue massages in between encounters. Needless to say, eavesdropping on Champagne having sex makes it hard for Harry to keep up his gay deceit, and when he’s not trying to convince his angry brother-in-law Stanley (Paul Thomas) to give Harry his share of their business’s profits, Harry is sneaking out for some female company. It’s only a matter of time before Champagne finds out the truth about Harry, but can he keep his hetero habits hidden for the full two weeks of the job? And more importantly, can he do the job without falling in love with his intelligent, beautiful, sexually adventurous boss?

CHAMPAGNE FOR BREAKFAST was clearly a relatively big-budget production for an adult film of its era. Shot on 35mm, the film looks comparable to a studio picture of the same era, and the cast is great. Leslie Bovee is particularly good as Champagne, a light, fun part, but one she seems born to play. She and John Leslie have good on-screen chemistry, which is good since they have to basically carry the entire film themselves. The Three’s Company-lifting plot is mostly played fairly low-key—thankfully, Leslie doesn’t go all-out cartoon camp with his “gay” act—but Harry’s homophobia provides a jarring note of mean-spiritedness in what is otherwise a very light comedy mostly focused on Champagne’s sexual exploits. He angrily storms out on the girls trying to have a threesome with him, and later when Champagne hires a male prostitute (Jonathan Younger) for Harry, Harry punches him in the face in a panic. It hardly makes him a character to root for, and it’s especially out of place given Champagne’s own tentative experimentation with another woman (Candida Royalle). It’s tough for an audience watching today not to think Champagne clearly deserves a lot better than Harry.

Dated sexual politics aside, CHAMPAGNE FOR BREAKFAST is worth a look. Vinegar Syndrome restored the film in 2K from its original 35mm negative, and the disc includes both hard and soft trailers for the film as well as alternate scenes from the R-rated version of the film. The film looks great, with vibrant color that really pops off the screen. Luckily for anyone who wants to check out more of Warfield’s films, Vinegar Syndrome will be releasing a Drive-In Collection double-feature of two of his softcore features in April. If the previous Peekarama disc and this release are any indication, that will be a release well worth checking out as well.