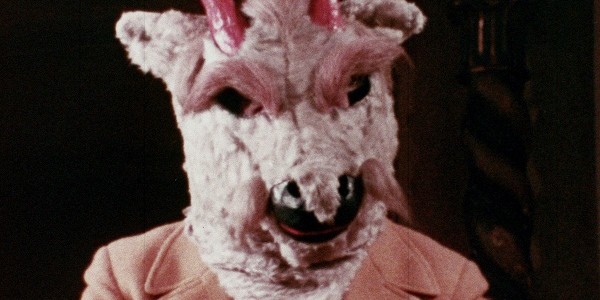 Vinegar Syndrome’s Drive-In Collection has been a gold mine for fans of obscure exploitation films, releasing everything from hardcore features by Anthony Spinelli (which have since been moved to their excellent Peekarama line) to family-friendly Bigfoot movies (CRY WILDERNESS), low-budget action (DEATH FORCE) and horror (DEATH BY INVITATION) and just about everything else in between. The most exciting releases are frequently those by “lost” filmmakers, such as the double feature of films by Eric Jeffrey Haims (A CLOCKWORK BLUE & THE JEKYLL AND HYDE PORTFOLIO).

First up is the last film in this set to be released theatrically: MARSHA: THE EROTIC HOUSEWIFE (1970). Marsha Jordan stars as Marsha Bannister, a sexually frustrated housewife who discovers her husband Greg (Edward Blessington) has been cheating on him with a secretary at work while she slaves away at home all day with their son. Once she finds out, Marsha goes on a spree, going to bed with any man who will have her and making frequent trips to Las Vegas while hubby is out of town. Tired of her double life, Marsha tells her story to a sympathetic neighbor who helps her figure out a scheme to get Greg back in line, but there’s a risk of exposing Marsha’s infidelities. Will Marsha and Greg go back to their happy home life, or is it too late for their love?

MARSHA is a decent softcore feature with an actual script and good pacing, running a brief 66 minutes. It never feels like it’s dragging, as the story is generally pretty engaging. The acting is all over the place, but Jordan (looking like she may have been on loan from a Russ Myer production) is fine in the lead role. The writing is pretty stereotypical, but there’s nothing offensive about it. It basically feels like a harmless time capsule from the era right before the independent softcore feature was made obsolete by the booming adult film industry. It’s obviously dated, but that only adds to MARSHA’s charm.

Next on the disc is FOR SINGLE SWINGERS ONLY (1968). Heide Andersen plays Gracie, a young woman who opens the film by directly addressing the camera as she tells her story. Unfortunately, Andersen is clearly not a native English speaker, and her accent (Swedish or Dutch, perhaps?) is occasionally impenetrable. Gracie and her roommate Gloria move into an apartment complex advertised as being “For single swingers only,” and boy, do they mean it. A couple of guys help the girls move into their new place, and by the end of the night they’re already paired up and neither of the girls spend their first night in their new apartment. While they engage in protracted writhing and moaning sessions, the assistant manager Ruth wanders around and peeks in the windows. Another horny resident named Connie drags an old drunk into her place, leading to an unsettling bit where she drapes his boxers over his face and kisses him through the boxers.

For the most part, FOR SINGLE SWINGERS ONLY is extremely dull. Seemingly half the movie’s 72-minute running time is spent on the sequence of Ruth wandering around eavesdropping on people, while they make a lot of obviously dubbed-in moans and dry hump each other endlessly. The best parts are when Ruth and Connie have a lesbian encounter on what is referred to as a “vibrating bed,” but the mid-60s version of a vibrating bed, which looks more like a medieval torture device than something on which a person could actually rest. There are lots of very poorly-chosen close-ups of some very bad teeth, Gracie’s narration abruptly ends at some point (but not before she informs the audience that the swinging life turns love into “an ugly, smelly game”), and there’s a really weird left-field ending.

HER ODD TASTES (1969) rounds out the triple feature. Marsha Jordan returns, this time in the role of Chris. Chris decides to move away from her home town following a lesbian affair with her sister Lisa (Capri), and starts a business selling vibrators door-to-door. During one of her sessions with a male client, the man pulls a knife on Chris, and she accidentally kills him in self-defense. She flees and is picked up by a publisher, who helps her clean up the crime scene and discovers that the murdered man was a sex researcher looking for the “ultimate pleasure.” Chris accepts her savior’s offer to continue the research on a world-wide sex adventure in pursuit of ultimate pleasure, taking her to such far-flung locales as Hong Kong and South Africa. Will Chris discover the ultimate pleasure, and can she get away with murder?

No points for guessing either of those answers. Chris’s adventures are, unfortunately, mostly made up of the same kind of softcore action found in FOR SINGLE SWINGERS ONLY. The set-ups for each scene are different, but the results are usually more of the same. In Hong Kong, a Madame gives Chris heroin. In South Africa, bizarrely, Chris finds herself as the centerpiece in an elaborate Satanic Black Mass/sex ritual before the cult sends her, drugged, to fend for herself in the wild. A hunting party finds her and a kindly young man nurses her to health while his father angrily and jealously looks on. Aside from the relationship with her sister at the start of the film, there’s hardly ever a nod to anything Chris does being all that “odd,” at least until she returns to America to face her ultimate fate.

The three films are presented on this disc in 2k scans from Don Davis’s private collection, and as such don’t have quite the same level of sharpness and color quality as Vinegar Syndrome releases scanned from negatives or other preferable elements. There are scratches and lines and plenty of visual noise, but not enough to make much impact on the films’ watchability. As per usual with Vinegar Syndrome’s releases, these films look considerably better than they ever have before in any home video release, even if the transfers are not quite as pristine as some of their bigger releases. Fans of 1960s softcore and curiosity seekers will find that this disc is well worth picking up for MARSHA alone, and will no doubt have much to look forward to with Vinegar Syndrome’s future discoveries of interesting corners of exploitation film history.