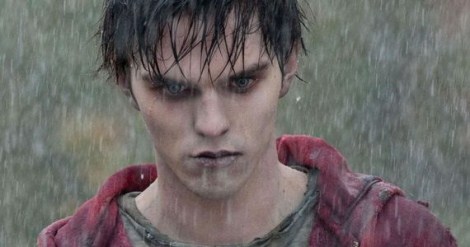 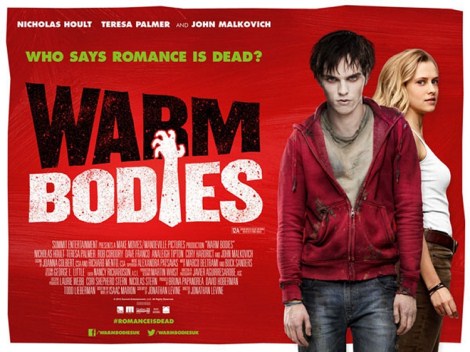 The tipping point for the current zombie trend has arguably been reached, despite the energy afforded by audiences to getting geared up for a new season of “The Walking Dead” or by Paramount to desperately try to keep people excited about the film version of WORLD WAR Z six years after it was first announced. There hasn’t been any room for a generic zombie film for the last few years, and even more unique takes on the subject (JUAN OF THE DEAD, DANCE OF THE DEAD, FIDO) are starting to wear thin to audiences with zombie fatigue. While there’s no doubt the zombie movie will always be around and DAWN OF THE DEAD will still be screened on a regular basis, as a huge cultural phenomena, [insert “living dead” based pun here].

Jonathan Levine’s WARM BODIES is a late entry to the game, based on Isaac Marion’s 2011 novel told from the point of view of a young zombie who falls in love with a living girl. Essentially a romantic comedy with a bit of brain eating involved, WARM BODIES is certainly a unique zombie film. Nicholas Hoult plays R, a life-impaired lad who spends his days wandering around an airport populated entirely by other members of the undead. He occasionally exchanges grunts with M, a default best friend in the sense that they have a vague flint of recognition in their eyes when they see each other, played by Daily Show regular Rob Corddry. As R, named as such because it’s the only part of his name he can recall, can’t do much more to communicate with others other than slowly wander around and occasionally hack up a half-formed word, he’s got plenty of time to ponder his situation via narration, which fills the audience in on R’s desire to find some sort of meaning in his afterlife. 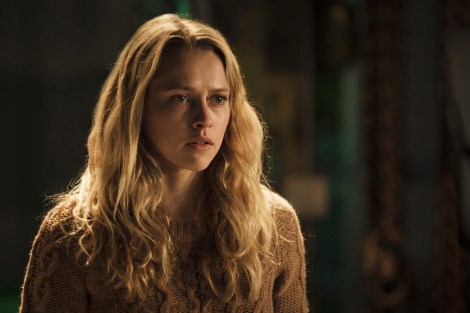 Meaning comes in the form of Julie, played by Teresa Palmer, a young woman sent out with a group from a compound of survivors to restock supplies from the outside world that has been overrun by the undead. R falls for her upon a horde of his kinfolk attacking the group, and after he gnaws into the brain of Julie’s boyfriend (Dave Franco), R begins absorbing the boy’s memories. Julie is spared by the onslaught as R teaches her how to act like a zombie to fool the others, and takes her back to a plane in which he keeps as a home.

The relationship between the two develops slowly, as R convinces Julie to stay in the plane until the coast is clear for her to go back home, acquiring food for her and showing off his collection of old records and stereographic cards. Meanwhile, he keeps eating pieces of her boyfriend’s brain and slowly becoming more “alive” as his heart begins to beat again, which doesn’t help them much when they’re trying to hide from the “bonies,” zombies that have lost their humanity to the point where they’ve ripped off their skin and now pursue human flesh without the shambling hesitation of most of the diseased.

As the film progresses, we see that the lead characters being named “R” and “Julie” is no accident, as the similarities to “Romeo and Juliet” become more obvious as the pair are each trapped in the social structures of their own worlds – the human one, fascistic, paranoid, and headed by Julie’s dad (John Malkovich) and the dead one, hungry for life to the point of wanting to consume it whole. R’s evolution from standard shambling zombie with an internal monologue to someone able to articulate his thoughts to others begins to have an effect on the rest of the zombie population as a whole, which gives WARM BODIES a definitively original take on a tired genre.

Oddly, by reworking the genre in the guise of a sweet, and sometimes genuinely funny, love story, WARM BODIES becomes less of a zombie film and more of a cute little romance about a nice girl who meets a pale hipster with incredibly slow reaction time. Hoult and Palmer are agreeable leads, and Hoult in particular does a great job at emoting through the limited facial expressions and movement allowed for a member of the walking dead. It’s to their credit that the film never even verges on cloying – you genuinely want to see this agreement between the living and the dead to work out.

The problem is that, as a zombie film, WARM BODIES is so based in the conceptual that you can’t help but feel a little bit cheated by the world that it creates and doesn’t explore. As R’s narration drops off, we lose more and more of viewing the new, apocalyptic world through the eyes of one of the dead, one of the most interesting things about the film. Centering the film around the relationship works for the emotional factor, but as we never get a sense of the world as a whole outside the bunker, or have a clear understanding as to what, exactly, triggers the “re-humanization” of the dead (Falling in love? Eating brains? Having human contact?), we never get a full sense of the logic that the film is trying to create.

This isn’t to say that WARM BODIES is anything less than perfectly entertaining. It’s clever, surprisingly heartwarming, and features the best use of Roy Orbison’s “Pretty Woman” I’ve ever seen in a movie. Analeigh Tipton (of Whit Stillman’s DAMSELS IN DISTRESS) does a fine job as Julie’s best friend in a role that would otherwise be unexceptional, and the attacks from the Bonies are genuinely creepy. Levine, whose debut film ALL THE BOYS LOVE MANDY LANE has been stuck in distribution limbo for longer than WORLD WAR Z has been in production, gives the film a genuinely human heart and a quick pace that keeps you from asking too many questions.

For most audiences, that should be plenty, and WARM BODIES is the perfect film to see if you bring along your friends or significant other that’s into “zombies” but not ZOMBIE. Die-hard horror fans should be warned, however, that while it’s a breezy and entertaining 97 minutes, it does a great job at creating a concept that it ultimately falls short on exploring.