Despite a looping structure supplied by a plot that sends its protagonist on a drug trip that involves hallucinogenic freak-outs and time travel, THE WAVE is really a simple morality tale with a basic lesson about the consequences of our decisions. While I normally tend to bristle at films that rely too heavily on the idea that there is an intelligent power in the Universe balancing the scales of justice, there is an endearing quality at play with THE WAVE that gives its “karma straightening things out” plot feel less like manufactured bullshit and more like a refreshing lack of cynicism.

After finding a shady loophole to avoid his company having to make a huge life insurance payout to a firefighter’s family, uptight lawyer Frank (Justin Long, nicely dialing it back for a change) decides to throw caution to the wind for a change and accepts the invitation from his friend Jeff (Donald Faison) to go out on the town to celebrate. After a pit stop at a bar where they meet party girls Natalie (Katia Winter) and Theresa (Sheila Vand), the four wind up at a house party where Frank and Theresa take a strange drug offered by a spooky dealer (Tommy Flanagan).

After he passes out, Frank wakes up to find himself alone the next morning in the trashed house with his wallet missing. Thus begins an odyssey that finds Frank trying to track down Theresa and the dealer, whom he believes has maxed out his credit cards and emptied his bank account. This task is made all the more difficult by the effects of the drug he took that causes him to experience time jumps, walk through doors and emerge across town, and have hallucinations that make his oily boss (Bill Sage, having fun hamming it up) look and talk like a demon. As the impact of the drug increases, Frank’s journey becomes increasingly chaotic as he enlists Frank and Natalie to help him in his quest and accidentally invites the wrath of a different drug dealer (Ronnie Gene Blevins) from whom he inadvertently steals a quarter of a million dollars worth of drugs.

Where the film runs into trouble is when it relies on its overly convoluted structure to spice up what is actually a fairly straightforward redemption tale with a metaphysical twist. While the sequence where Frank sees the board members at his company turn into foul-mouthed demons who salivate and become insatiably horny at news of Frank’s scheme to save millions of dollars by rejecting a legitimate life insurance claim is hilarious and unnerving, using Frank’s bad drug trip for the subplot of running afoul of the second drug dealer really does not pay off in anything other than some strained comedy and a false sense of danger. The same goes for the scenes of Flanagan’s creepy, enigmatic presence popping up for vague exposition.

Much better are fantasy scenes that Frank slips into where he talks with Theresa in candy-colored worlds that come off as though Tarsem Singh directed some test footage for a Garden of Eden movie. In these moments, the film calms down, takes advantage of Vand’s glowing presence, and actually finds the gently reassuring metaphysical tone it works too hard to attain via Frank’s voiceover and Flanagan’s absurd performance.

Despite the missteps surrounding the drug dealer storyline (and the tired cliché of a scummy lawyer needing to make things right), THE WAVE sticks the landing with a wrap up that is emotionally satisfying, even if the plot twists seem to defy the film’s wonky internal logic. It really does feel like Carl Lucas’ script needed one more pass to fully flesh out the ideas at play, but director Gille Klabin finds the emotional truth buried in the fantasy and amped up comedic moments to create something genuinely optimistic. Who am I to disregard a feat that sincere? 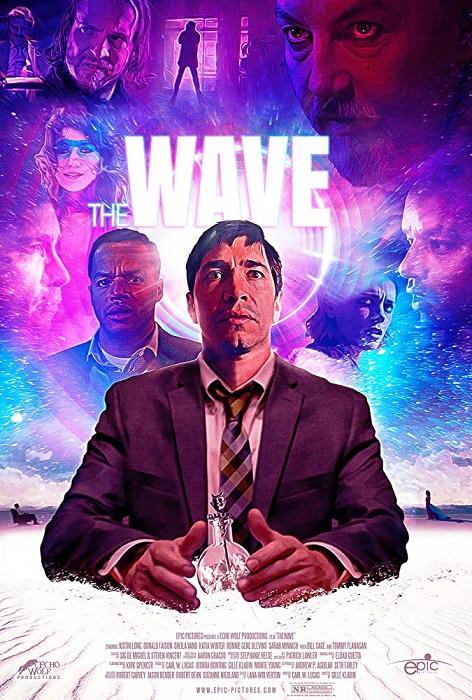