The past decade produced so many terrific, underappreciated horror movies that one list couldn’t contain them all. Here’s the second round of overlooked or unsung films whose reputations should flourish in the coming years. 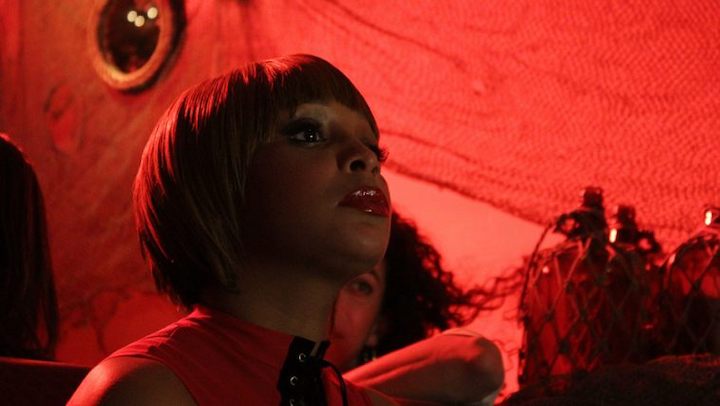 The appeal here writes itself. Here’s Spike Lee, one of our all-time great filmmakers, reimagining GANJA & HESS, one of the great, fascinating cult movies ever made. And it’s a true reimagining at that: Lee keeps the skeleton of the plot intact but does a much more lucid take on it. Where Bill Gunn’s original film unfolds like a hazy, half-remembered nightmare, Lee’s is a much more conventional narrative about an affluent doctor (Stephen Tyrone Williams) who becomes addicted to drinking blood before bringing an unsuspecting lover (Zaraah Abrahams) into his bizarre life. Lee’s loquacious script initially features a troubling amount of overt, philosophical musing before yielding the stage to a poignant, heartbreaking tale of doomed lovers reckoning with their own strange existence. One finds solace in oblivion; the other finds it in embracing this lonely fate in the film’s final shot, which finds Lee channeling the spirit of Jean Rollin.

It’s hard to imagine anything more existentially horrifying than slowly realizing that you don’t really know the person you’ve married anymore. So much is invested in a relationship, almost to the point where you’re not just you anymore: you are always you and that other person, who remains with you. Until they don’t, which is the terrifying void that HONEYMOON occupies by literalizing these horrors for newlywed couple Bea and Paul (Rose Leslie and Harry Treadaway), whose honeymoon goes straight to hell when the former wanders off in the woods, and something else comes back. It looks and sounds an awful lot like his wife, but Paul can’t shake the feeling that he’s being haunted by a doppelgänger looking to upend his new, blissful life. As deeply unsettling as any film on this list, HONEYMOON tears at body and soul in revealing the horrors of a relationship gone sour.

New Zealand roared to the genre’s forefront with films like WHAT WE DO IN THE SHADOWS and DEATHGASM. Sandwiched in between these two pillars was HOUSEBOUND, an offbeat haunted house effort that carries that distinct streak of irreverence that so often defines Kiwi horror. Gerard Johnstone’s film takes a crooked path though hidden secrets and repressed trauma to weave an unexpectedly sweet tale of familial reconciliation—and exploding heads.

For some reason, it feels like we all forgot how ambitious Ryan Gosling’s directorial debut was. Not content to bring any conventional tale to the screen, he wove a mesmerizing pastiche of European horror films, fairy tales, and neon-noir, threading it with evocative touchstones from previous collaborators like Nicolas Winding Refn, Derek Cianfrance, and Terence Malick. LOST RIVER is a lot of movie, almost to the point that it feels like Gosling put every creative impulse he had into a blender, and this is what came out. But despite all its familiar elements, it remains an elusive, idiosyncratic piece that’s really not quite like anything else. You might argue to the contrary, but please be aware it features musical numbers from Saoirse Ronan and Ben Mendelsohn, so that argument is very much invalid.

Remember when Joel Edgerton essentially made a sick, twisted South Korean revenge thriller? I feel like we can’t be reminded of that enough, which explains how this one lands on this list. As gleefully perverse and just downright fucked-up as any movie to play in multiplexes during the past decade, THE GIFT features the most terrifying version of Jason Bateman imaginable as a family man whose dark past comes back to haunt him when a former high school classmate (Edgerton) invades his life. What starts as a seemingly basic riff on the “unwanted, weirdo friend from hell” routine quickly contorts and shifts into a bleak back-and-forth revenge narrative, with each man digging their claws deeper and deeper into the other until one is left completely devastated.

The anthology format witnessed a resurgence during the 2010s, largely heralded by the popular V/H/S series. A little less acclaimed was this follow-up of sorts from more or less the same creative team, who impossibly hit on yet another clever omnibus hook for this macabre collection of interlocking roadside tales. Its frame story isn’t apparent at first but slowly emerges through the looping, hazy, feedback loop logic guiding this spooky puzzle box. Even when it’s unlocked, it doesn’t completely make sense—but that’s what we want from bad dreams that well up in the purgatory of our subconscious. 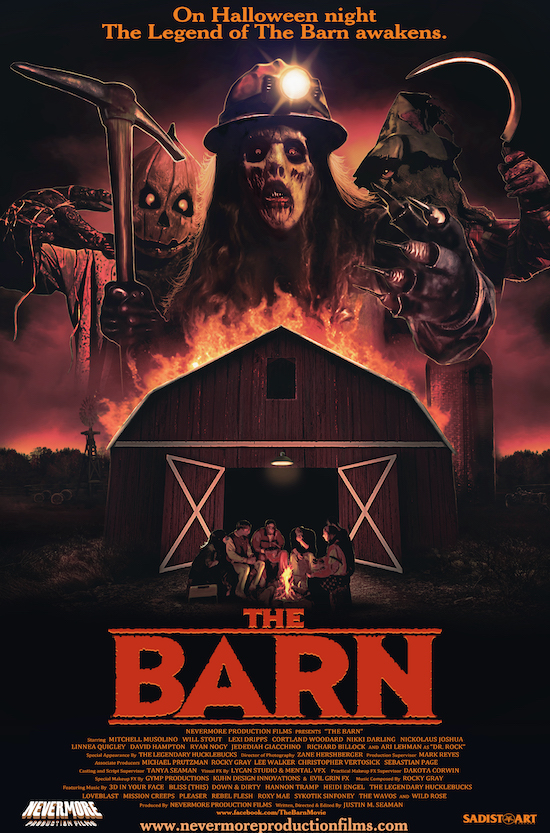 Despite landing with a thud at the box office, 2007’s GRINDHOUSE has cast a long shadow ever since its release, one that stretched well into the next decade, inspiring scores of homages, pastiches, and, sure, let’s just call ‘em rip-offs of bygone genre efforts. You know these things when you see them: lovingly crafted tributes looking to evoke nostalgia via aesthetics, an approach that often tries to compensate for other, more lackluster elements. But every now and then, you come across something like THE BARN, a perfect sort of alchemy that blends gory effects, Halloween nostalgia, and endearing characters into an effort that stands on its own merits and not as pure homage. It was possibly my favorite discovery during the past couple of years, and I can’t wait to see what writer/director Justin Seaman hatches for THE BARN PART II later this year.

Tired: throwbacks to VHS-era splatter movie nonsense. Wired: throwbacks to VCR Board Game splatter movie nonsense. That’s the hook for Jackson Stewart’s BEYOND THE GATES, which is perhaps best described as “JUMANJI goes to hell.” A pair of estranged brothers (Graham Skipper & Chase Williamson) sift through their missing father’s abandoned video store to uncover “Beyond the Gates,” an old video board game that unleashes literal hell in this raucous, gory romp that feels like someone put a couple of Lucio Fulci and Kevin Tenney tapes into a microwave and nuked them on the highest setting.

Another slasher that found itself struggling for attention in an increasingly crowded direct-to-video market, FENDER BENDER was also a victim of some pretty conventional marketing. A cursory glance at it would have you believe it’s just another riotous slasher throwback with a masked killer hacking through unsuspecting teenagers. And while that’s where it ultimately winds up, Mark Pavia is patient with the setup, as the bulk of the film follows the masked maniac’s (Bill Sage, also credited as merely “The Driver”) deliberate, cunning attempt to stalk his latest victim. Despite a title that seems to promise vehicular carnage, FENDER BENDER is a home invasion film that dovetails nicely into a bleak, mean splatter movie. Between this and NO ONE LIVES, it’s obvious that the quickest way to my heart involves a slasher movie with an enigmatic maniac known only as “The Driver.”

Quite possibly the most mournful horror film of the past decade, THE TRANSFIGURATION demystifies the vampire mythos to explore childhood trauma and adolescent anxiety. If that sounds a little bit like MARTIN, fret not: writer/director Michael O’Shea gives Romero’s masterpiece a shout-out alongside several other vampire tales because his teenaged protagonist Milo (Eric Ruffin) is obsessed with the creatures. This obsession gnaws at him to the point where he’s convinced that he’s a vampire himself: a tortured, lonely soul who must feast on blood to survive. Befriending a fellow troubled teen (Chloe Levine) complicates his life even further, as he begins to wonder if a normal existence might be possible. For a brief moment, THE TRANSFIGURATION feels like it could an unexpectedly sweet, tender story of two broken, lonely souls finding comfort in each other. A horrifying, dark turn takes the film in a decidedly different direction, though, as Milo learns the same bleak lesson as his 1977 counterpart: “there’s no real magic ever.” 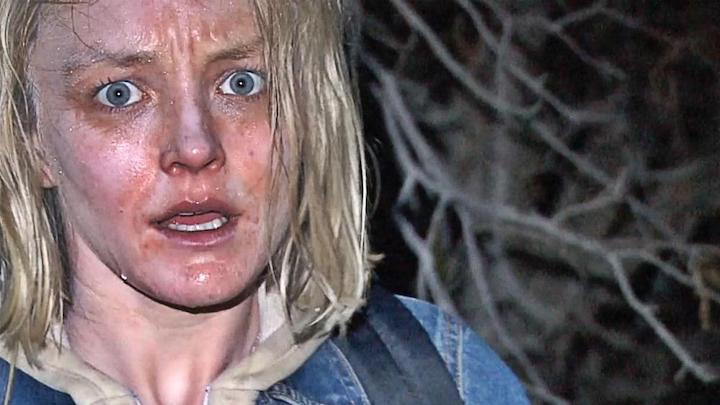 The title for this one lends itself to an obvious joke in this context, and, sure, I can kind of see how this on went largely unnoticed back in 2017. Found footage was very much on the outs at this point (as evidenced by the lukewarm reception to BLAIR WITCH), and the subject matter feels like it would have been better left in the ’90s, back when alien conspiracies were all the rage. But it turns out that PHOENIX FORGOTTEN is an exceptional riff on this theme, one that’s more faux-documentary than straight-up ragged camcorder footage. Its commitment to its aesthetic is admirable, especially for a major studio release: the bits of PHOENIX FORGOTTEN that involve recovered footage from the ’90s looks every bit the part of it, right down to the low resolution and 4:3 aspect ratio. While its climax does devolve into typical, shaky-cam found footage stuff, it’s the details and compelling yarn spun around that conventional stuff that sings here.

I can’t decide if PYEWACKET boasts one of the most disturbing or ridiculous loglines of the past decade: essentially, it’s about a moody teenager (Nicole Muñoz) who’s so mad about her mom (Laurie Holden) moving them out to the middle of nowhere that she casts a black magic spell on her. Look, I know we all thought we were angsty teens when we went through a goth phase, but how many of us walked the walk like this? To director Adam MacDonald’s credit, he treats this premise quite seriously: PYEWACKET is primarily a story about a mother and daughter confronting their frayed relationship in the wake of tragedy. It just also happens to involve a ritual sacrifice to summon a demon of vengeance, so you also get a PUMPKINHEAD riff by way of a haunted house movie, meaning everybody wins. 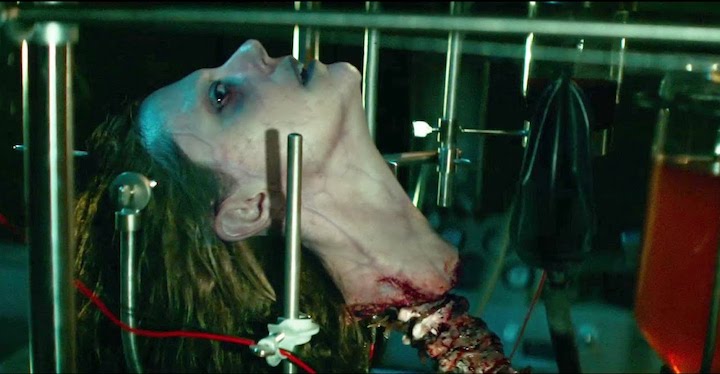 OVERLORD may have been a victim of bad timing. For some reason. Paramount saw fit to release a story involving undead Nazi legions in early November, just a week after Halloween, so it kind of fell between the cracks. I’m still hesitant to include it here because it did some respectable business at the box office and is generally well-regarded by those who have sought it out; however, I’m going with my gut instinct that says this one still didn’t get quite enough love for being an incredibly tense, vicious war movie that just happens to involve mutant Nazis. It sounds like a wild premise, and Naziploitation films tend to thrive on sheer provocation and nothing else. OVERLORD isn’t like that at all, though: it’s a genuinely compelling and thrilling men-on-a-mission movie with real, human stakes. Director Julius Avery astutely recognizes that this premise can work so long as it’s a primarily a wartime drama about rugged men that gracefully dovetails into a Stuart Gordon movie with bug-eyed mad scientists and melting flesh.