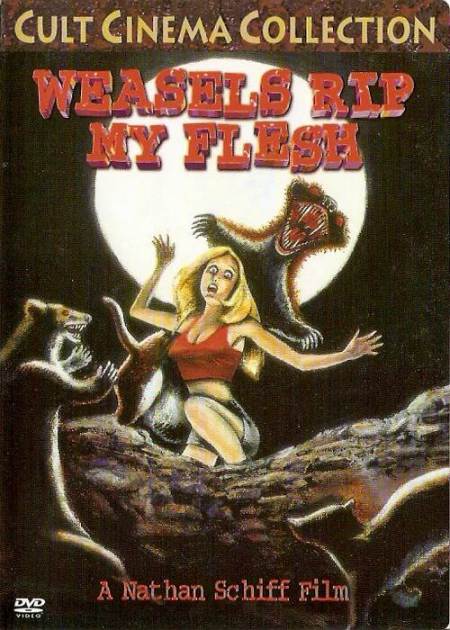 As a movie viewer, there’s a certain kind of moment that I absolutely live for. It’s not a “damn, this is incredibly good” moment, although those are okay. It’s not a “holy shit, this is awful!” moment, although I’m partial to those depending on my mood. No friends, what I prize above all, and it happens all too rarely, are those “dear God, what the fuck am I watching?!” moments. You know what I mean — those instances where a flick is just so ineptly realized, bizarrely thought-out (assuming it’s thought out at all), or utterly incomprehensible that you feel the person or persons responsible for said film are either: brain damaged, transported here from not just another planet but an entire other dimension, haven’t even seen, much less learned anything from any other movies, or any combination thereof. Rest assured — Long Island zero-budget auteur Nathan Schiff’s 1979 super-8 debut “feature,” WEASELS RIP MY FLESH is jam-packed with more of these type of instances than its meager 67-minute runtime could possibly allow for. 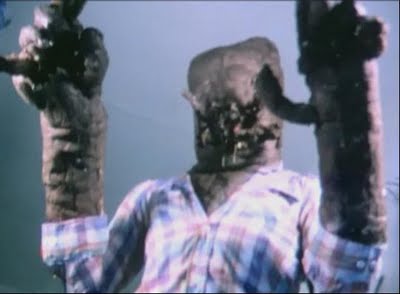 Where to even begin? Well, how about some background on Schiff himself. At the time of this film’s amazingly slapdash, flying-by-the-seat-of-its-pants production, he was a high school senior whose sole “qualification” — not that any are necessary — for directing a monster movie was that he loved monster movies and had a super-8 camera. Apparently, if the title of his little opus is any indication, he was a pretty big Zappa fan as well. I guess that never hurts, right? Proceeding with (a whole lot) more balls than brains, he cast friends and relatives in all the parts, made some papier-mâché creature costumes and headed out to his parents’ back yard and other nearby locales to shoot a story about radioactive slime from Venus that crashes to Earth in a space probe and infects a rabid weasel that turns into a huge mutant creature with a taste for flesh n’ blood.

Oh sure, there’s more to it than that — but not much more. Two government agents are investigating the case, a mad scientist is experimenting with the weasel’s blood, the sidekick-type agent get some of said weasel blood injected into him by aforementioned mad scientist and turns into some kind of half-man/half-weasel thing that really looks more like a walking carrot. What matters here is watching how Schiff uses his total budget of $400 (yes, you read that right). 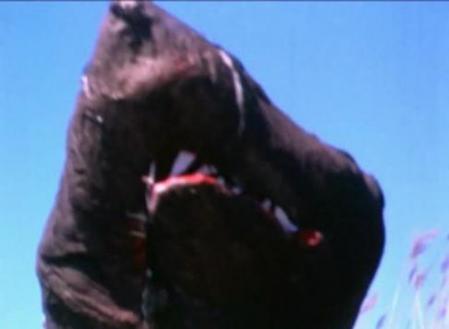 All of which means, of course that I love it to pieces — and yet if Schiff had his way I’d probably never even have seen it. In his defense, he knew he was just making stupid, outlandish stuff here. The whole idea was to show the finished product to the very same friends and family who helped him make it and they’d all sit back and have a good laugh. But somehow, just somehow, good 30-plus years before YouTube or other viral video sensations, this thing got around. It started being shown at regional horror-movie and science fiction-geek get-togethers (they didn’t even really call them conventions or film festivals back then) around the East Coast at first, and from there it just sort of took off. VHS dubs of the original 8mm print made their way westward in the early days of home video, word of mouth about this (admittedly minor) cult phenomenon spread and Schiff himself eventually managed to negotiate a (again, admittedly minor) distribution deal for an official videotape release. Rather than shy away from what you or I might consider a youthful cinematic indiscretion, if not an outright embarrassment, our guy Nathan just sort of ran with it for a while. He would go on to make two other super-8 oddities, 1980?s LONG ISLAND CANNIBAL MASSACRE and 1985?s THEY DON’T CUT THE GRASS ANYMORE, both of which we’ll take a look at here in the next few days. The “stars” of this film, Fred Borges (the mad doctor) and John Smihula (the lead investigator) would form the backbone of his “stock company” of players. And whaddaya know? 33 years later, here we all are, still talking about this thing.

All of which isn’t to say that Nathan Schiff is an especially good filmmaker or anything of the sort. His movies, this one especially, positively reek of amateurism at best, utter cluelessness at worst. Yet there’s an authentically mad vision here that just can’t be denied, as well as an earnestness that adds a welcome dash of charm. This is moviemaking on nothing but gumption alone, and if you can’t respect that, then I got no time for ya. 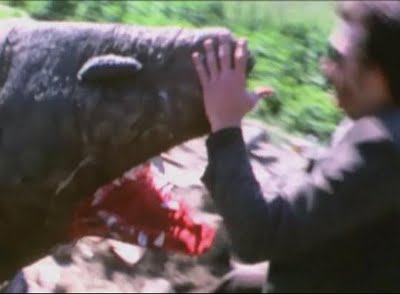 Image Entertainment released WEASELS RIP MY FLESH, as well as Schiff’s two subsequent efforts, on DVD in 2003 under their “Cult Cinema Collection” banner. It’s presented full-frame (of course) with mono sound and while both video and audio have been remastered to what I assume is the best extent possible, it still looks pretty damn grainy and you can still hear the camera running in the background fairly frequently. Extras include a hastily-assembled trailer for the film, a decent 15-or-so-minute interview with Schiff, a selection of some other super-8 short films he shot, interviews with Borges and Smihula and a feature-length commentary with Schiff that’s actually pretty interesting despite the fact that he speaks in almost painful monotone. All in all they do a nice job of padding out what would otherwise be an admittedly paltry release, and you definitely get your money’s worth by the time all is said and done.

You may not end up seeing the entirely accidental grandeur of WEASELS RIP MY FLESH, it’s true. To say it’s not for all tastes would be an understatement of almost criminal proportions. Yet even if you just can’t get past the ineptitude of its homemade severed limbs and copious amounts of red Karo-syrup blood, its premise is so mind-numbingly weird, and its execution so aggressively incompetent in all respects that even if you just have no heart at all and hate this thing you’ve still gotta admit that it’s like absolutely nothing else you’ve ever seen — even if, like me, you think that you’ve pretty much seen it all. Whether it’s “good” or “bad” almost doesn’t even matter. Nathan Schiff’s $400 went further than he ever could have dreamed.