Even though anime appears to be more popular globally than ever, it is usually more for television programs than films—and even in the instances of popular movies, there aren’t too many artists who are known by audiences. While Studio Ghibli and Hayao Miyazaki still loom large in most westerners’ minds as the main names in Japanese animated filmmaking, there have been a number of talents over the years (including through and after Miyazaki’s retirement) that have etched out recognition for themselves, even in this shadow. Of course, this is all relative—fans of animation or Japanese film in general will know many of these figures, but in this case I’m specifically talking about the general, mainstream American audiences who are slowly learning more about these famed creators. The late Satoshi Kon (PERFECT BLUE), Mamoru Hosada (THE BOY AND THE BEAST), Masaaki Yuasa (LU OVER THE WALL), Hideaki Anno (THE END OF EVANGELION), Mari Okada (MAQUIA: WHEN THE PROMISED FLOWER BLOOMS), Shin’ichirô Watanabe (COWBOY BEBOP: THE MOVIE), and more have risen in estimation and popularity over the past few years and decades.

Another person who has quietly become a juggernaut in the Japanese animated film industry is Makoto Shinkai, a writer/director who has been making critically acclaimed anime movies with a growing fanbase since 2007’s 5 CENTIMETERS PER SECOND and was behind one of the biggest movies in the history of his country, 2016’s YOUR NAME. Shinkai has returned to the big screen with the stateside release of his 2019 film, WEATHERING WITH YOU, which has all of his hallmarks—for good and ill. 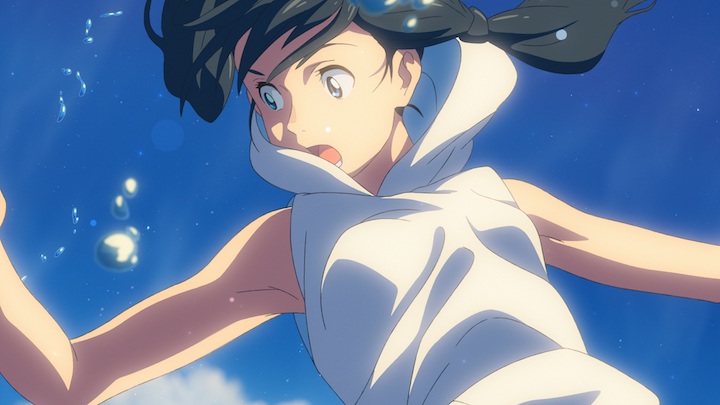 Playing like a cross between Nicholas Sparks, Douglas Adams, and Haruki Murakami’s Kafka On The Shore, WEATHERING WITH YOU is the tale of runaway teen Hodaka (Kotaro Daigo), who comes to Tokyo to escape his suffocating provincial life only to discover a confusing city full of opportunity that all seems to be well beyond his access…and constantly raining. He finds a bit of sanctuary with the Kei (Shun Oguri) and Natsumi (Tsubasa Honda), who run a small, and somewhat shady, tabloid that traffics in urban legends. Hodaka also finds a bewitching young woman in Hina (Nana Mori), a teen herself trying to do her best to get through the drudgery of days and take care of her little brother, Nagi (Sakura Kiryu). Oh…and Hina can also control the weather and make it stop raining for a bit. These group of oddballs come together in surprising ways involving pimps, ancient legends, the police, and of course, romance.

Like all of Shinkai’s work, WEATHERING WITH YOU is easily one of the most gorgeous films of its year and possibly the decade—his animators, methods, and approaches remain unparalleled in being able to capture light, real world geography, and (especially in this case) water that is at once life-like but also incredibly romantic and breathtaking. Part of what gives Shinkai’s movies such freedom to soar with their magical realism/fantasy plots is that the action occurs in completely grounded locations that are derived from photos, while also capturing real world physics and phenomena in ways that many current CG programs simply cannot and will not ever be able to do. And, while using the lush and dense imagery of the real world for familiarity in his stories, Shinkai also imbues them all with a sense of astonishment, as if the wondrous powers at work in the narrative are heightening and elevating the world around them to reveal gorgeous landscapes and mesmerizing vistas. 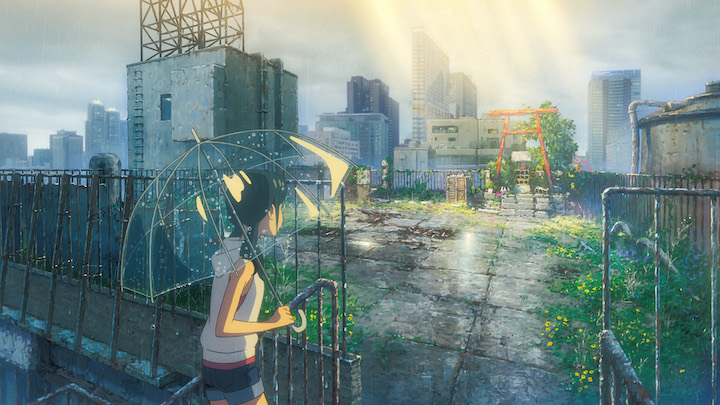 But, also like all of Shinkai’s work, his storytelling is beginning to become a more obvious set of tropes than it has been in the past. Whether it’s CHILDREN WHO CHASE LOST VOICES, the exquisite THE GARDEN OF WORDS, or YOUR NAME., there are certain checkboxes of narrative elements and cinematic styles (beyond gorgeous art) that are present in all of his films. This isn’t uncommon for many filmmakers, of course—Quentin Tarantino, Steve McQueen, Ernst Lubitsch, Wes Anderson, Karyn Kusama, and Miayazaki himself all have these notable throughlines and recurring threads in their filmographies. 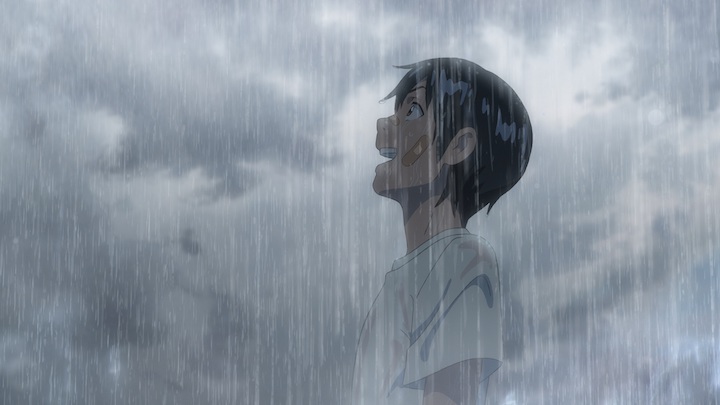 But it just became much more obvious that these particular tics are always part of a Shinkai story: unspoken (usually teenage) love between two people who somehow come from two different backgrounds whose passion for each other grows with power and intensity as the film nears its conclusion; the introduction of a plucky ensemble of characters that are misfits but still very lovable; some “magical” element that adds an interesting wrinkle to the love story set amidst an otherwise regular world; and a use of spare piano and string scores for majority of the film’s run time until deploying modern Japanese pop songs for moments of realization and/or declaration of feelings. Oh and there’s usually a moment of despair and a turn for the worse right before the ending, leading viewers to wonder if it will work out or not as they hope it will (to be fair—sometimes it doesn’t).

Again, this isn’t abnormal for any storyteller with a specific aesthetic or dealing with one foot in reality and the other in a heightened form of it (through ultraviolence, odd codes of behavior, fantasy elements and beyond). But it does detract a bit from the viewing experience for those familiar with his work to realize that some of this is becoming like “Makoto Shinkai bingo” and just waiting to check off the next square.

That being said, WEATHERING WITH YOU is still an incredibly charming and mostly effective tale that tackles identity confusion, romance, and the cost of responsibility in world very much like our own, but with enough magical realism in it to make the teenage intensity of it all seem justified by the elevated powers at work. There are so many cute moments, nice bits of comedy, and a real sincerity (even amidst the melodrama) to finding something good amidst all the pain, that it wins out. The lore of the world that Shinkai creates—a mixture of old legends, invented mythology, and climate change concerns—is impressively deep without having everything to be explained or everyone’s backstory completely revealed. The characters are fairly unique (if, again, akin to various Shinkai archetypes he frequently uses) and they all have moments to shine.

Maybe this is my own mentality, but I always hated when people say that “teenagers think they are invincible.” I don’t believe that—and especially more so now with generations facing global catastrophes, horrific acts of violence, and more. I think most teenagers may not appreciate the opportunities present to them or how much of their lives aren’t yet bogged down by drudgery of “adult” responsibilities and maintenance. But teenagers don’t think they’ll live forever—that’s why so much of what happens is the most important thing ever and their emotions are so intense around it. This was the central metaphor for Buffy The Vampire Slayer, and is part of the story in YOUR NAME. as well as a bit of WEATHERING WITH YOU too. It’s just that in those fictional cases the apocalypse and freak bits of impossible are literal. 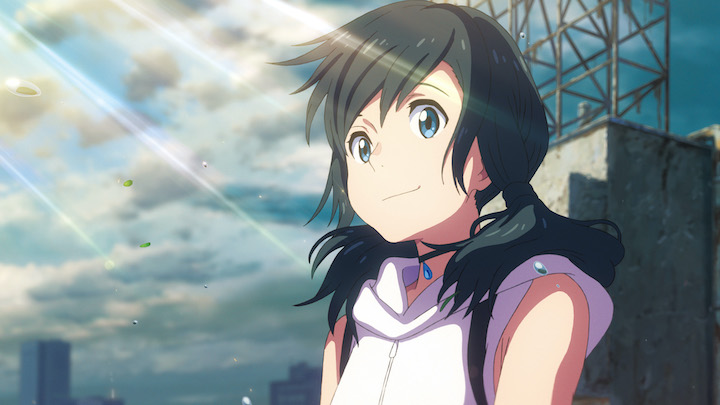 But Shinkai captures that teenage sense that their confusion about life is so frustrating—so they attach superlative intensity and outsized meaning to these experiences because that represents a sense of clarity. This night is the best night ever, this heartbreak is the worst disaster to befall anyone; these feelings are real, and clear, and not bogged down by nuance or mystery about figuring out what’s next or who you are or how to be. So while Shinkai revisits a lot of these beats and characters across his films, and are very pronounced in his latest work, it comes from a true understanding and appreciation for the power that intense emotions bring and the fact that romantic events can obliterate all of the muddled gray around them. In WEATHERING WITH YOU, despite falling back on familiar Shinkai tropes, it’s still a unique enough tale of the magic that inhabits our beautiful world that we can easily fail to notice. 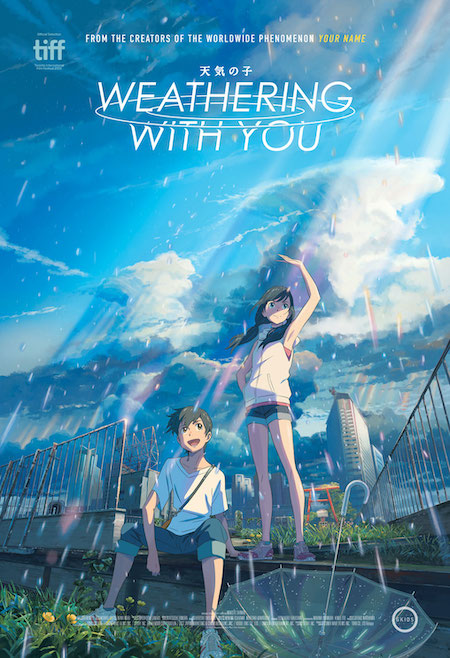 (Please note that any westernization of Japanese names—rearranging traditional order of family name and given name—is based on the manner in which the artists are referred to in the press kit from the studios, GKIDS and Epic Pictures, and other sources—such as interviews and database listings. No offense is intended as it’s an attempt to go along with how these artists appear to be credited.)