A new Star Trek series isn’t just cause for celebration, but the return of one of the most beloved characters in the nearly 54-year-old franchise is a momentous occasion. Fans have been clamoring for more life in the 24rd Century ever since Star Trek: Voyager’s series finale in 2001 (spoiler: they made it home) and with Star Trek: Picard, they get their wish. For non-Trekkies with a life, many fans cite episodes like “The Best of Both Worlds”, “Family” (one of my personal favourites), “I Borg”, and “All Good Things…” (TNG’s series finale) as good preparation for the new series. They’re not wrong—those are very good episodes detailing Patrick Stewart‘s Jean-Luc Picard and his dedication to the principals of the United Federation of Planets (see also “Inner Light”, “Chain of Command”, and “Tapestry” for additional character insights).

For a character I had despised greatly during TNG’s tumultuous first season, the bald, French, British-sounding Picard has come a long way, even surpassing William Shatner’s James Kirk as the preferred captain in some fans’ estimations (though they’re wrong). The new series is a potential mea culpa after the cast of Star Trek: The Next Generation bade adieu in their last film, 2002’s STAR TREK: NEMESIS, a film that fell at the box office to J. Lo’s MAID IN MANHATTAN on its opening weekend (the first Star Trek film not to debut at #1 on its opening weekend—it dropped an incredible 76.8% in its second weekend, sliding to 8th place). Many films have received critical re-appraisal as decades pass (TWIN PEAKS: FIRE WALK WITH ME was booed at Cannes and savaged by film critics in 1992 before becoming embraced by cinephiles and critics), so a re-examination of NEMESIS is in order. Has it improved with age? In a word…no.

To examine NEMESIS’ failings, it’s important to look back at the state of the franchise in 2002: there was only one Star Trek series on the air, Enterprise, a prequel set in the 22nd Century, and its ratings on the fledgling UPN network were declining considerably after its first season. The man in charge of Enterprise and the TNG movies was Rick Berman, and after the lukewarm reception of 1998’s STAR TREK: INSURRECTION (F. Murray Abraham’s villainous scene chewing notwithstanding), he wanted a fresh approach to the TNG films.

He hired Oscar-winning screenwriter John Logan, an admitted Star Trek fan, which seemed like an inspired choice to take the franchise in a new direction. Paramount must have had confidence in his abilities, as NEMESIS’ budget was set at $60 million, much more than the other TNG films. Jonathan Frakes (Cmdr. Riker) had directed the last two films, but was overlooked in favour of noted film editor and occasional director Stuart Baird (EXECUTIVE DECISION, U.S. MARSHALS), who was contractually owed a directing gig by the studio. Despite Baird’s lack of Star Trek knowledge, the studio felt an outside perspective, along with Logan’s script, would make for an exciting film appealing to non-Star Trek fans. Alas, time has not been kind to the final cinematic voyage of the Enterprise-E.

It takes a while before one realizes that NEMESIS alters course for a collision with mediocrity. The opening prologue in the Romulan senate is mildly engaging and horrific (a radioactive weapon that turns Romulans to dust!) and the Earth-set wedding of Riker and Troi (with cameos by Whoopi Goldberg and Wil Wheaton!), finally ending the will-they-or-won’t-they speculation, is a nice bit for long-time fans. Once Data starts singing Irving Berlin, however, the problems begin—nobody wants to listen to an android’s off-key singing (is his emotion chip malfunctioning again?). Conveniently, as the Enterprise is en route to Betazed for the traditional all-nude Betazoid wedding (I don’t want to picture Riker in his hirsute birthday suit), the ship receives a signal that matches Data’s positronic brain, but nobody suspects a ruse.

Of course it’s a ruse, one plotted by the new Romulan Praetor, Shinzon (Tom Hardy), a clone of Picard developed but forgotten by the Romulans and left to die on the Romulus’ perpetually-dark twin planet, Remus (the Remans are effectively scary-looking as intergalactic vampires, influenced clearly by NOSFERATU). Despite meeting Shinzon face to face, Picard still doesn’t realize he’s being misled until it’s too late. The bulk of the film’s budget is spent on the succeeding space battle between the Enterprise and Shinzon’s massive warship because Shinzon wants to destroy the Earth. Why? Because he’s dying (Romulans aren’t good at human cloning?) and he’s jealous of Picard’s life. Seriously.

Most of NEMESIS’ problems fall on both Logan and Baird for creating a Star Trek film that supplants ideas in favor of action. Allegedly, Baird refused to watch any episodes of TNG and one wonders if he saw the preceding three films, based on his poor handling of the characters and plot. He tries desperately to ape the nuances of fan-favorite STAR TREK II: THE WRATH OF KHAN, but fails on every level. Unlike that film, NEMESIS’ character beats aren’t earned and the humor is cringeworthy (to be fair, humor is a difficult concept for most of the various Star Trek spinoffs); Shinzon, unlike Khan, doesn’t have strong motivation for his vengeance—sure, he’s dying because of shoddy Romulan cloning techniques, but why lash out at the Federation? Wanting Picard’s blood and DNA to reverse his genetic breakdown makes sense, but being jealous of Picard’s life is a very petty reason to irradiate the Earth. Picard is right to be wary of Shinzon, but he doesn’t seem all that fazed that his clone has seized power of the Romulan Empire—WAKE UP, JEAN-LUC!

Even Data isn’t immune to mischaracterization—why doesn’t he suspect something when they detect a disassembled android relative buried on a nearby planet? No mention is given to his evil twin, Lore (dispatched during TNG’s final season), so why accept that another Data-like android exists without question? Perhaps Data’s aging program overpowers his cognitive abilities (And don’t get me started on the Data-like android, B-4 (groan), also played by Brent Spiner—a simplistic prototype programmed by Shinzon to acquire the Enterprise’s defensive capabilities). Many questions arise: where did Shinzon and his merry band of Remans find a Data prototype? How did they know about Data’s history stuck on a dingy darkened planet?

Couldn’t they come up with an easier plot to acquire starship defensive capabilities? How did Shinzon build a massive warship on Remus without the Romulans noticing? Baird doesn’t care if you have questions—he’ll distract you from potholes with uninspired action sequences: “Oh look, it’s SPACE DUNE BUGGIES! Let’s oversaturate the color of the desert planet!” Data’s sacrifice to save Picard is the biggest WRATH OF KHAN swipe, but unlike the classic two-hander between Kirk and Spock in that film, NEMESIS does it only for shock value. Killing off a beloved character without thought or care, is truly disheartening.

NEMESIS has another lost opportunity with Shinzon’s Reman mentor/consort, the Viceroy (a post-Beauty And The Beast, pre-HELLBOY Ron Perlman, no stranger to latex) has inexplicable telepathic abilities—as distant relations to Romulans, do all Remans have telepathic abilities? The Viceroy uses his mysterious abilities to keep Shinzon alive long enough to execute his vengeance plot and aid him in violating Troi’s mind (because Shinzon likes her hair?!?), but there’s no development—he’s just a stock action-film henchman and it’s a shame to waste Perlman’s considerable talents (and losing a fight to Riker is just embarrassing). This is the first time Remans have been acknowledged in Trek canon and it’s a shame nothing is done with them beyond being a mere plot device. 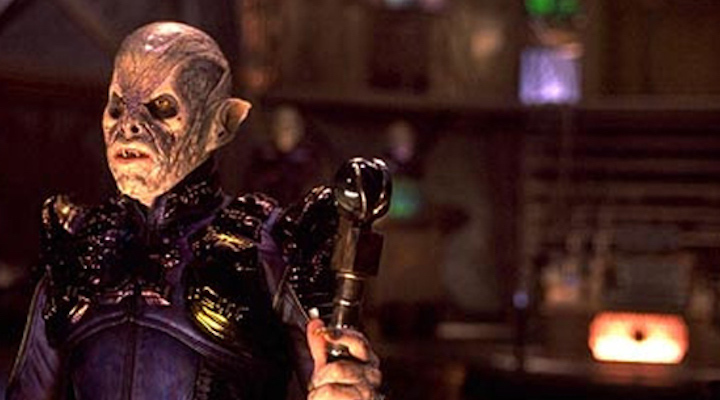 If it’s action you want, you got it—besides the aforementioned space-dune-buggy sequence, the drawn-out space battle between the Enterprise and Shinzon’s warship should be exhilarating, but it too falls flat. Star Trek fans have been spoiled by countless space battles in previous films and on Deep Space Nine, but despite the increased budget, Baird fails to make the battle engaging. Phasers are shot aplenty, photon and quantum torpedoes fired to depletion, shield weaken, but it’s all been seen before in better films. I fell in love with Star Trek because of its ideas, stories, and characters, not the eye-glazing technobabble, so I don’t care about structural integrity fields or poorly-designed shields. Even the late Roger Ebert expressed his disdain:

“I’ve also had it with the force shield that protects the Enterprise. The power on this thing is always going down. In movie after movie after movie I have to sit through sequences during which the captain is tersely informed that the front shield is down to 60 percent, or the back shield is down to 10 percent, or the side shield is leaking energy, and the captain tersely orders that power be shifted from the back to the sides or all put in the front, or whatever, and I’m thinking, life is too short to sit through 10 movies in which the power is shifted around on these shields. The shields have been losing power for decades now, and here it is the Second Generation of Star Trek, and they still haven’t fixed them. Maybe they should get new batteries.”

NEMESIS isn’t completely terrible: Tom Hardy is very good as Shinzon, relishing the villainous role, clad in an intergalactic cenobite costume, but it’s a shame that it’s an underwritten role. He holds his own against Patrick Stewart and it’s easy to see why filmmakers took notice of his talents. Jerry Goldsmith’s score, one of his last before passing away, is dependably good, draping a mediocre film with undeserved aural beauty, his STAR TREK: THE MOTION PICTURE fanfare making a melancholy farewell to the franchise.

After 15 years’ worth of new episodes and movies, Star Trek was a tired franchise and needed a rest. STAR TREK: NEMESIS illustrates why the property needed it—stagnant ideas and general malaise fill nearly every moment on the screen, moving the franchise backwards instead of propelling it forward. Nearly 20 years later, a re-invigorated Patrick Stewart and a new generation of writers hope to erase the painful memory of a film that heralded the end of an incredible creative run. I truly hope they make it so. 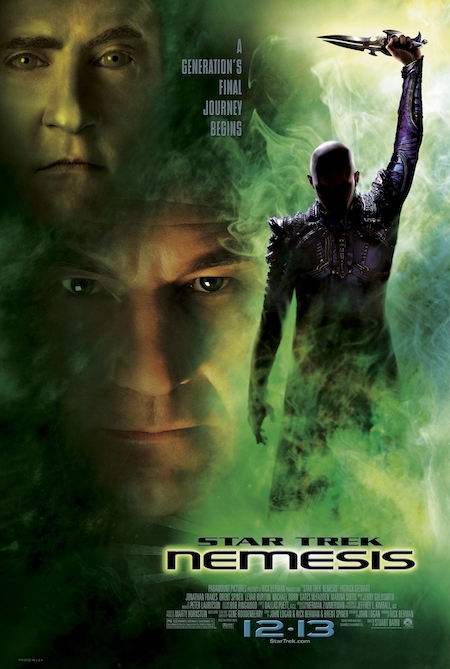