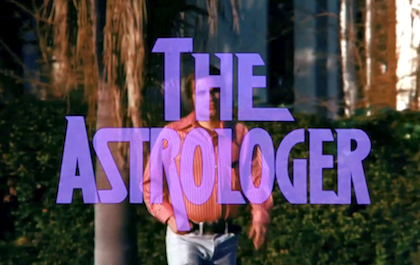 I’ll admit it right off the bat – I covet obscurity more than I probably should. My “movies I should watch” list is monumental, a virtually-endless cavalcade of some of the greatest films ever made, most of which are easily available on Blu-ray or on one of the many streaming services to which I subscribe. Hell, my queue at FilmStruck could probably provide a full month’s worth of non-stop entertainment, and I’m sure I’d love and appreciate 98% of it.

But, ugh, it’s also just so there.

Now, I’m not saying this is a good attitude that makes me a better movie fan – in fact, I’d argue that valuing obscurity to the point where it’s nearly as captivating as content may make me less of a movie fan and more of a title fan. This is especially the case when these films, once discovered, don’t live up to the mystery that’s been build up around them, and this happens 99% of the time – as witnessed by my being able to watch obscurities like THE INTRUDER, KEEP OFF MY GRASS, or THE YOUNG SINNER in recent years. While they’re rarely without any value, finally watching the films often feels anticlimactic, like finally opening your Christmas gifts after being excited for months only to find a few neat things you’ll use but nothing that gives you the sensation that eager anticipation does. 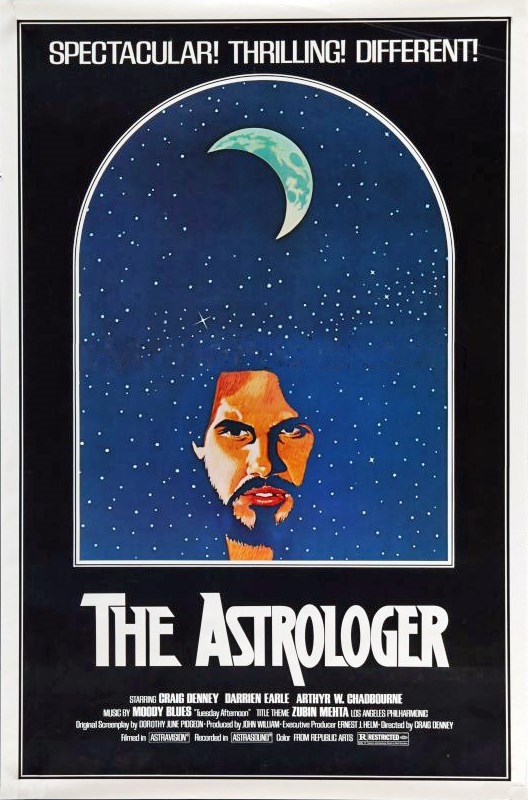 THE ASTROLOGER is in that other one percent, joining the likes of GONE WITH THE POPE and the recently-unearthed NEST OF THE CUCKOO BIRDS as cinematic discoveries that would make the front page of National Geographic, were that periodical to start covering exploitation cinema AS THEY SHOULD.

In 2011, THE ASTROLOGER was little more than a myth, a plot synopsis and cast list discovered by the Temple of Schlock blog for an odd horror (?) film made in 1975 and easily confused with a James Glickenhaus film of the same name made the same year. (The Glickenhaus film managed a VHS release under the title SUICIDE CULT, and is worth seeing for ‘70s rapture fans, but not the batshit opus of the one I describe.) However, the American Genre Film Archive discovered a print of the film in 2014 and showcased it as part of that year’s Fantastic Fest, likely the first time in several decades that it had been seen.

Few could quite believe the spectacle that was before them. Producer, director and star Craig Denney’s deranged ego project was a truly amazing sight to behold, involving carnivals, cobras, jewels, and the rise of the titular character to become a messiah-like figure, presented with psychedelic intensity and a soundtrack partially scored by the Moody Blues. A few screenings of the film were held in Austin and other locations (I was fortunate enough to catch one in 2014, and at this point, it seems like a drug trip I had once more than a theatrical experience) and the film vanished. Unlike many of AFGA’s other features (such as the similarly obscure BAT PUSSY), THE ASTROLOGER has yet to land on a home video or streaming format, potentially due to rights issues regarding the music or the film itself.

As a result, THE ASTROLOGER remains in that blissfully obscure realm that Jacob Knight called “the Secret Handshake Movie” in his write-up for Birth Movies Death. With the availability of physical media, streaming, and the ever-present grey market (now making its way into more easily-accessible torrent sites, thus preventing you from having to send money to the sketchy back pages of Film Threat, even worse, go to a convention and be social), fewer and fewer films are genuinely impossible to see, even if you have to go through questionable methods to do so. THE ASTROLOGER, like Crispin Glover’s WHAT IS IT? and IT IS FINE! EVERYTHING IS FINE., are available to be seen only during theatrical screenings, which are few and far between.

Fortunately, Chicago residents have the opportunity to do so this weekend at the Music Box Theater. THE ASTROLOGER makes its Chicago debut this Friday and Saturday night at Midnight, sponsored in part by this very website. (This website is Daily Grindhouse. It’s in the big logo at the top.)

Obscurity is certainly one reason to see THE ASTROLOGER – this weekend presents an opportunity for you to check out a film that you may never, ever have another chance to see. However, THE ASTROLOGER is a mind-blowing experience of its own, and even if it were easily available, it would still warrant sell-out midnight shows in the same vein as EL TOPO or THE ROOM – apt comparisons, as THE ASTROLOGER sometimes feels like the best parts of both of those cult favorites.

I’ve deliberately avoided going into any specific detail about what THE ASTROLOGER is about, as it’s a feast best served without any preconceived notions of its content. (If you can arrange to have never seen a film before in your life, this would be the ideal situation. Perhaps take a child! No, don’t take a child.) If you’re a film fan in the Chicago area, I can’t think of a better thing to do – THE ASTROLOGER scratches the itches of both the obscure and the amazing, and does so in a way that won’t be easily forgotten.

Want to see THE ASTROLOGER at Music Box Theatre? Get tickets here! Click this sentence!