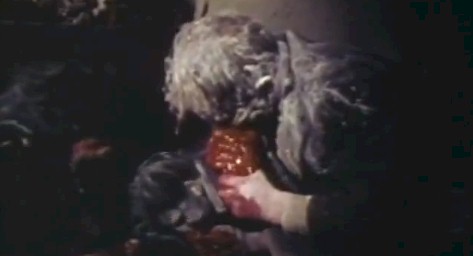 I love genre cinema. I will always have a soft spot for horror, action, sci-fi, and all the subgenres that exist inside those larger categories. What I have never felt any real connection to are those films that exist in the realm of pure sleaze. You know the ones: the films from the ’70s and ’80s, filled with ugly violence and sex that is the opposite of titillating, usually shot on cheap film stock with semi-amateur casts. But knowing these films have a large following and several companies devoted to restoring them makes me wonder what I am missing. With that in mind, I am going to do a deep dive into the world of sleazy exploitation. This is My Exploitation Education. This month’s entry is CORPSE EATERS. 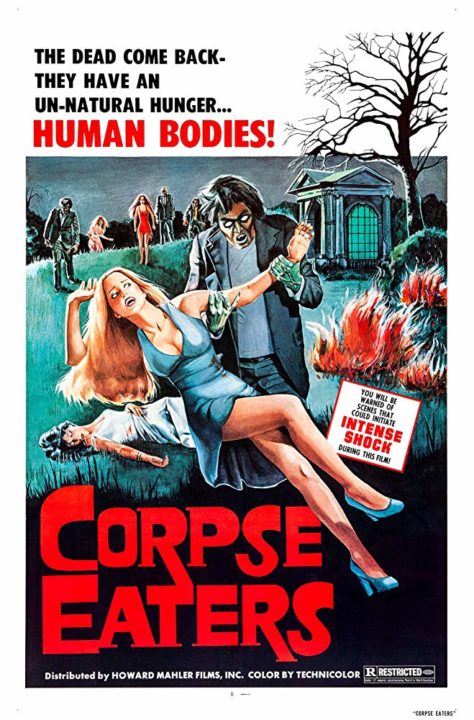 I am not sure if CORPSE EATERS technically falls under the umbrella of the Canadian Tax Shelter film. It was released in the right time frame, but who knows when it was actually produced. Whatever the case may be, despite its low production values and poor acting, it is far more entertaining than most of the slickly made yet generic output (with the notable exceptions of BLACK CHRISTMAS and Cronenberg’s films) of that generous program designed to kickstart the Canadian film industry. As a regional, purely independent canuxploitation horror flick, it certainly embraces the pure grindhouse sleaze aesthetic in the same way as its regional American cousins.

The film barely runs sixty minutes, so to stretch things out, the screenplay by producer Lawrence Zazelenchuk (who made the film to run at his drive-in theater) is oddly structured, practically made up of two plots that only barely intersect in the end. But plot is not the reason to watch a movie that proudly asserts its intentions not just by calling itself CORPSE EATERS but also by including the stunt of warning viewers when events are going to get grisly by flashing an image of a mild-mannered theater patron gagging into his handkerchief in disgust.

One plot follows a comically cynical funeral home owner who spends most of his screen time grumbling about the recently departed being nothing more than meat sacks, getting drunk at his desk, and driving around a cemetery, grousing even more about the futility of existence when you just wind up rotting in a coffin. Yes, folks—a good fifteen minutes of CORPSE EATERS is not made up of eating corpses, but instead is given over to starkly nihilistic ramblings that sound like they were written by a thirteen-year-old who thinks he is being edgy and dark. But when those words come out of the mouth of a middle-aged mortician they become magically hilarious.

The other plot involves a pair of bored young couples as they sit around a park. After one of the couples has an awkward sex scene (which includes a hilarious, jaw-dropping, and very Canadian flourish—a visual so wonderful, I will not spoil it here), they decide to visit a graveyard since it’s Friday the 13th. I guess that’s a good enough reason? The couples perform an ill-conceived séance in a tomb and—surprise, surprise—the dead rise from their graves and proceed to eat one of the unlucky quartet. It should be noted, this victim is not a corpse when they are first getting their guts munched on, so they do not technically live up to the title. 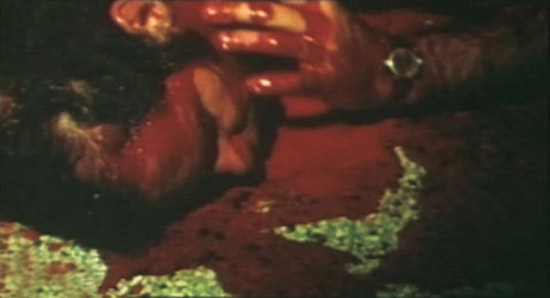 Oh sure, eventually a corpse is partially eaten by the living dead horde (a touch that is at least unique within the zombie genre), but it’s a bit too little, too late to keep the title from being something of an empty promise. But, in all honesty, who cares? CORPSE EATERS finds its entertainment value outside of its pretty well done gore with strange touches that are never explained. Why is one of the women so openly hostile toward her boyfriend? Why does her brother think nothing of humping away on his girlfriend right in front of her? Why is the mortician such a fatalistic drunk? Why do men with back hair insist on wearing tank tops? None of these things are explained and the movie is that much better for it because of both their out of left field feel and apparent importance. It’s like the weird caustic nature of the mortician bled into the movie’s thematic DNA where everything is important, yet nothing matters.

CORPSE EATERS is a movie that knows it’s low-rent trash and embraces that. It has fun with its disreputable nature and indulges in sleaze like a drug addict locked in a pharmacy. In the end, isn’t that the kind of thing we want from exploitation films?

Special thanks to DAILY GRINDHOUSE contributor Jason Coffman for introducing me to CORPSE EATERS.