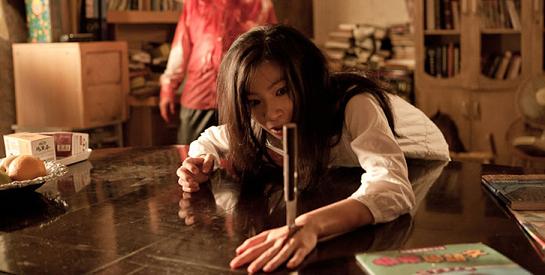 Now things are getting really interesting. The tribute to Sir Run Run Shaw resumes today, with a renewed focus on arguably the wildest genre hybrid of them all: the kung-fu vampire film. 1985’s MR. VAMPIRE kicks off the day, partnered with its 21st-century update, RIGOR MORTIS. [Read the Daily Grindhouse review!]  After the primetime showing of the Chow Yun Fat casino epic FROM VEGAS TO MACAU, the genre-blending comes back with 1976’s KILLERS ON WHEELS, a Hong Kong take on the bikesploitation genre. At midnight you can see a prime example of the “hopping vampire” trope, the Shaw Brothers/ Hammer Studios co-production THE LEGEND OF THE SEVEN GOLDEN VAMPIRES, in which a bunch of vampires jump around in funky masks doing sweet kung-fu moves. I’ve seen that one. You need to. It’s a unique kind of glory. 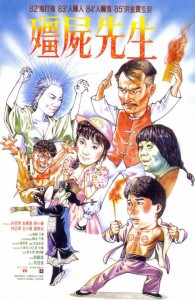 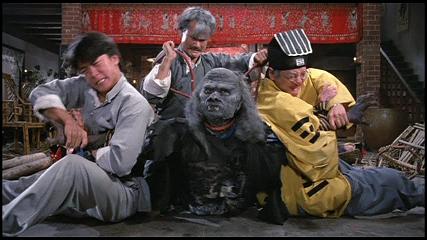 Bouncing through the moonlight like demented, bloodthirsty pogo sticks, hopping vampires are one of Hong Kong cinema’s most absurd and unique sights, and this is the movie that launched the craze that spawned hundreds of films. It’s the Big Bang of hopping vampires, so to speak. Produced by Sammo Hung, it stars Lam Ching-ying (Bruce Lee’s stunt double) as a stern Taoist priest who specializes in reanimated-corpse disposal, with the assistance of Chin Siu-ho (RIGOR MORTIS), as his kung-fu kicking right-hand man, and comedian Ricky Hui, as his idiot assistant. Set in Republican-era China, MR. VAMPIRE begins with a rich man’s old ancestor (played by Yuen Wah, one of Jackie Chan’s Chinese opera school brothers) getting buried in a less-than-ideal cemetery plot. Before you can say “Black Dog’s Blood,” his corpse is bouncing up out of the ground like a blood-hungry beach ball and it’ll take a foot to the face, a cherrywood sword through the heart, and a yellow talisman pasted to his rotting forehead to make him rest in pieces. An avalanche of Canto comedy, genuine horror, and slambang stunts, MR. VAMPIRE is probably the movie people are talking about when they say how awesome and insane Hong Kong movies are. 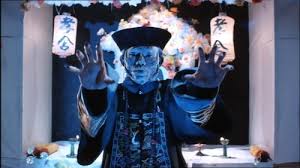 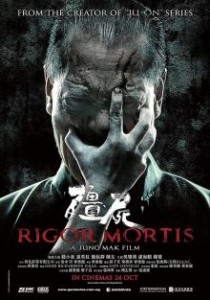 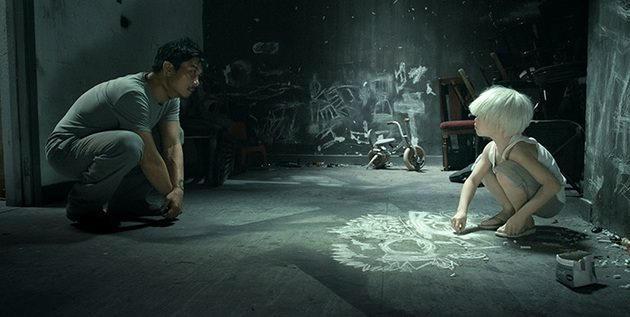 A spiritual sequel to MR. VAMPIRE, this moody flick is a gothic reinvention of Hong Kong’s classic hopping-vampire movies that turbo-charges the tired old formula with modern filmmaking chops. Chin Siu-ho plays himself, one of the stars of the MR. VAMPIRE series now fallen on hard times and forced to move into a decrepit, spooky apartment building. He’s barely put his bag down when the ghosts of twin sisters possess his body and try to force him to kill himself. Fortunately, the downstairs food stall is run by Anthony Chan (who in MR. VAMPIRE played Lam Ching-ying’s fellow corpse wrangler at the very beginning and very end of the film), a wandering kung-fu vampire buster. He saves Chin’s life, but real evil is afoot in the building and soon the dark halls full of slithering shadows are echoing to the sound of hopping vampires and creeping ghouls clawing their way across the ceiling. Crammed with a gallery of old-school greats, from Shaw Brothers vet, Kara Hui, to famed Eighties comedian Richard Ng, this cast is a blast from Hong Kong’s creepy old past, and they fill this movie with quiet dignity. RIGOR MORTIS was nominated for, and won, numerous awards, and if you spend a little bit of time falling under its dank, bloody, retro spell you’ll understand why. 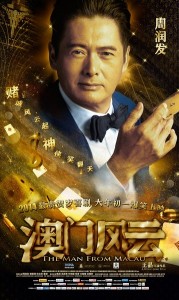 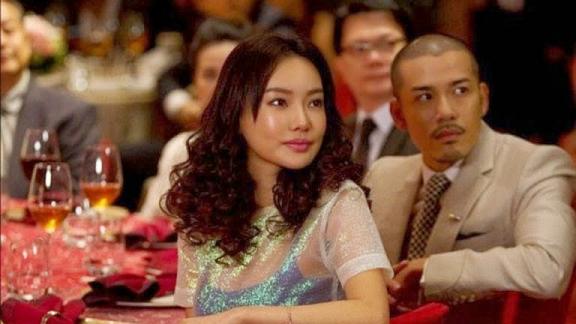 A semi-sequel to GOD OF GAMBLERS (1989), one of the most iconic Hong Kong movies of all time, this flick is a showcase for Chow Yun-fat, the Godzilla of Hong Kong movies: a massive megastar who towers over the landscape. A charmer who oozes so much debonair that he makes Don Draper look drab, Chow is firing on all cylinders in this no-holds-barred gambling movie, directed by Wong Jing, who will do absolutely anything to entertain an audience. Nic Tse (AS THE LIGHT GOES OUT) and Chapman To (3D NAKED AMBITION, ABERDEEN) are members of a family of con artists who get sucked into a plan by gambling legend Ken (Chow Yun-fat), a man whose magic touch with cards lets him “read” them with his fingertips. Ken’s plan is to fleece a criminal of millions, and in the process there will be action! Romance! Card duels! Singing! Dancing! One of the biggest hits of the year in Hong Kong, it became a word-of-mouth blockbuster in China, and it’s easy to see why. If more American movies were this eager to entertain, or this able to pull off pure entertainment, we’d all be having a lot more fun at the movies. 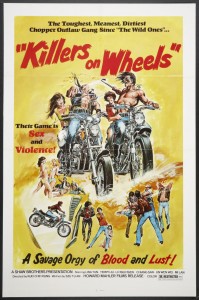 (aka MADBOYS IN HONG KONG)

Kuei Chih-hung loves his exploitation tropes, and with this movie he gives the world his very own, very bloody take on the biker picture (known more evocatively as MADBOYS IN HONG KONG). Starting off as a teen beach movie, two couples head out to a remote seaside villa to enjoy a weekend of sun, surf, and barbecue. Also enjoying the sun and sand is a bike gang made up of spoiled rich kids who like to slum it as a rowdy bunch of road rebels on their spiffy Yamahas. A series of class-warfare pranks between the two groups rapidly escalates out of control and suddenly we’re watching Kuei’s version of STRAW DOGS as the gang goes insane and decides that their barbecue menu will include the camping kids. Motorcycles jump through houses! Stuntmen on fire get thrown off rooftops! Boiling oil scorches faces! Biker gals strip naked! Spearguns will be used! By the end of this movie, everyone under the age of 21 has been run over, pierced, chopped, slashed, burned to death, or just bludgeoned into submission with a big old hog. 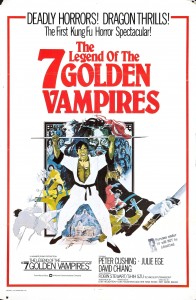 Shaw Brothers wanted to rule the world in 1974, and stage one in their plan for global domination was to team up with Hammer Studios, England’s House of Horror, and make a kung-fu vampire movie. Starring Peter Cushing as Van Helsing the vampire hunter, and Shaw Brothers icon David Chiang as his Chinese counterpart, this Saturday matinee horror hybrid was co-directed by Chang Cheh (uncredited; THE ONE-ARMED SWORDSMAN) and Roy Ward Baker (QUATERMASS AND THE PIT). The story is basic: Dracula is sucking the blood of virgins and turning large chunks of the Chinese countryside into devastated, nightmarish wastelands. Cushing and Chiang team up and head into the heart of darkness to kick Dracula to death. That’s it. But it’s the way the story is told that stands out. Hammer turns its gothic gaze to China, and gives us a cobwebbed creep-scape of deserted villages, abandoned cemeteries, and shadowy shrines where golden-masked vampires flit through the night, feasting on a terrified populace in this gloomy, moody, surreal nightmare of endless undead cannibalism. 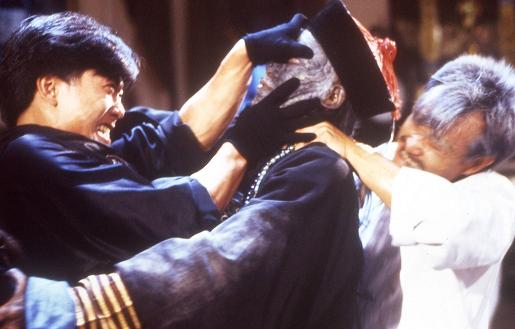