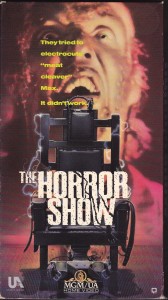 The death penalty was a hot button topic in the late ‘80s, a major marker in the 1988 presidential election and a controversial issue no matter where your state stood.  It’s not surprising that enterprising exploitation filmmakers utilized the image of the death row maniac to their advantage, churning out like likes of SHOCKER, THE HORROR SHOW, DESTROYER, DEATH HOUSE, SLAUGHERHOUSE ROCK, WELCOME TO SPRING BREAK and PRISON in the space of a couple of years.  (ERNEST GOES TO JAIL essentially closed off the genre in 1990 by perfecting it.)  1956’s THE INDESTRUCTIBLE MAN may have created the trope of an electric chair victim on a rampage, but it took the ’80s to turn it into a certified subgenre, populated with enough lightning effects to fill a dozen WITCHCRAFT sequels.

It was a subgenre that fried out as quickly as the switch was flipped, and by the time THE CHAIR was coughed out onto VHS via Imperial Entertainment in 1991, the interest well had run dry, and the few that did watch it weren’t impressed.    Reviews were savage, and the film, packaged as a horror flick, failed to entertain anyone in the Fangoria crowd.  While other titles of the era have recently been re-issued and re-discovered by modern audiences, THE CHAIR has been relegated to being a footnote in the careers of the actors involved, if it’s mentioned at all.

But THE CHAIR came first.

The first thing you notice about THE CHAIR is that it stars James Coco, the portly comic actor who passed away in February of 1987.  You can then surmise that THE CHAIR was originally shot in 1986, before the likes of SHOCKER were even in pre-production, and long before the electrocuted-prisoner-gets-revenge staple had become stale.  So what the hell made it take three years before it landed a tiny theatrical run in 1989, and an additional two before it staggered limply to video?

The simplest answer is that THE CHAIR just isn’t very good.  Hell, it’s not even really a horror film, so it’s no shocker that the Video Eye of Dr. Cyclops wasn’t enamored of its charms.  The sole film from Polish director Waldemar Korzeniowsky, THE CHAIR (written and edited by his then-wife, Carolyn Swartz) isn’t sure if it’s a screwball comedy, a romance, a satire on the nature of imprisonment or a drive-in movie about a vengeance-seeking warden.  It aspires to be all of these things at different times, and somehow manages to be miles off from any of them.

Coco plays Dr. Langer, a jovial psychologist who’s gotten government permission to re-open a prison in order to try a new type of rehabilitation for eight prisoners who’ve been determined as having a chance to reform.  Assisting him in this is Warden Dwyer (Paul Benedict), who was a guard when the prison was originally closed due to a riot, and a young university student Lisa (Trini Alvarado), whose fresh-faced optimism works well with Dr. Langer’s blissful spirit.

And it’s pretty damn blissful.  Dr. Langer gives gifts to all the prisoners, supplying them with new toys and outfits and taking requests for take-out food.  Lisa, in the meantime, innocently tries to psychoanalyze them to little effect, even after the group is plied with dream journals and carrot juice.  It’s all deemed “Project EGG – Emotional Guidance and Growth,” a system that causes eye rolls in the sinister warden and surly guards, including Mike Starr.

The prisoners are played a motley crew of character actors, including Stephen Geoffreys (who gets special billing, even though he isn’t given much to do), Brad Greenquist (as a white supremacist), Paul Calderon, and Tony nominee Calvin Levels as the transgendered Wilma, but none of them are given much to distinguish themselves from the crowd save for the actors’ performances.  It’s a testament to the actors’ range that they stand out at all – the film could have used a sequence in which Langer and the warden go over each prisoner’s individual personas.  We never even get to hear what most of these guys are in for!  Only Rick (Gary McCleery) is introduced separately, and then it’s just to set him up as a potential love interest for Lisa and foil for the warden.

Eventually, the electricity in the place starts acting up, resulting in a couple of non-prisoner deaths, and an eyeball begins to show up randomly within a lightbulb.  The warden starts talking to himself and we soon learn that the ghost of the original warden killed in the riots that closed the place is still haunting things and looking for blood.

One would imagine things would pick up at this point, but Korzeniowsky and Swartz throw you a curve ball and instead turn the movie into a prison break-out flick, as the inmates form a mob and trick the pleasant Dr. Langer, escaping from the joint.  Meanwhile, Warden Dwyer gets the brunt of the vengeful spirit, and the film ends with the idea that the place may re-open again as a high-end workout facility.  What the hell?

THE CHAIR is just a mess of ideas that don’t come together in the slightest, from the goofy music that plays during the psychoanalysis sequences to the strangely literary references to “Cannery Row” and Kafka to the surprisingly brutal turn of events that feel completely out of character from the rest of the film.  Is it a statement about how some criminals can’t be rehabilitated?  Is it a damning study of our justice system?  Is it just a weird showcase for James Coco, who turns in a comical-yet-humble performance that should be in a much better film?  Who the hell knows?

One strong point of THE CHAIR is Paul Benedict, the “Jeffersons” actor best known for an endless array of British fussbudgets.   As Warden Dwyer, Benedict gets to sneer at prisoners, go midly crazy and act insanely paranoid, all of which he does with relish.  And the film lets him, constantly shooting him as he ogles things suspiciously.  Seriously, I could fill this entire review with shots of Paul Benedict peering through things.  It’s great.

It’s not enough to recommend THE CHAIR, however.  It’s got some violence (including an eye popping) and weird imagery, but it’s too light to qualify as a horror film.  It’s got a lot of characters played by solid actors, but they’re given too little to do for it to qualify as a character piece.  It’s got a fair share of comedy, but virtually none of it is funny.  As far as I can determine, it’s the sole film produced by the Angelika Film Center’s “Angelika Films” arm (they distributed a number of other titles, including the excellent STREETWISE and the Maureen Stapleton film SWEET LORRAINE, also with Alvarado), and while it may have seemed like a good idea at the time, it’s no wonder that THE CHAIR didn’t lead to further cinematic chances taken.