ATTACK OF THE DEMONS is a mash-up of influences that never feels like its trading on nostalgia or even loudly referencing the real-world counterparts to the music/cinematic/video game entities in the film. It creates a sense of recognizable atmosphere that’s reminiscent of many things (from child-like exuberance in art class to Michele Soavi movies) but is never dependent on them or uses them to trade in for an actual new experience. The problem is that with all of this ingenuity, there are constant missteps that undermine each bit of creativity, so it’s a non-stop push pull of enjoyment and disappointment.

It’s 1994 and the small town/mid-size Colorado city of Barrington is hosting its annual music festival. Years after graduating high school, Kevin (voiced by Thomas Petersen) still lives in his hometown with his grandmother escaping into the world of the horror genre. Jeff (voiced by Andreas Petersen) returns to Barrington at the request of his parents, ostensibly to stay with his survivalist uncle Rolfe but uses it as an excuse to hunt down and play classic and obscure arcade games. Natalie (Katie Maguire) also hails from Barrington but only returns accompanying her music critic boyfriend and his pal who are there to review the concert while she enjoys a smaller performance by a beloved, obscure shoegaze band. The closer of the festival isn’t a musical act so much a summoner of demons that transforms the listening audience into infernal mutations that soon run amuck, killing and converting the townsfolk into their rampaging brethren. The trio have to figure out how to survive, and possibly defeat, this demonic horde before it’s too late. 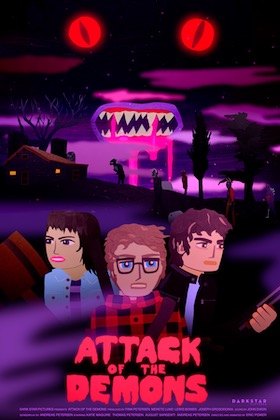 Director Eric Power’s ATTACK OF THE DEMONS (written by Andres Petersen) is incredibly frustrating to watch. Not because it is bad or derivative or anything — but because it keeps taking one step forward and one step backward. A relatively short (75 minutes) film that is done through animation of paper cutouts and backdrops combined via editing software. It is a remarkable amount of detail and an impressive visual feat. There is almost no way to avoid comparing it to South Park (even the press notes do it) as this form of animation isn’t seen outside of that show (and a few student films); plus it takes place in a small town that is also a burgeoning city in Colorado. The designs of the monsters are very much akin to some of the horrific entities in that show, while also evoking visuals from Metalocalypse, David Cronenberg films, Clive Barker artwork, and creatures from the EVIL DEAD series. The detail that director/animator Eric Power puts into so many scenes in ATTACK OF THE DEMONS is impressive while seeming deceptively simple; the art style seems rudimentary (not overly ornate like other animated works from non-indie projects) but then it dawns on the viewer how many moving parts are occurring at once in a given scene and it is astounding.

And yet… even with this excellent craftsmanship (especially done with such a small crew and independent of studios or major financial backing), there are some visual shortcomings. Many of the characters look exactly alike so it’s hard to tell them apart. While the particular approach of cut-paper stop-motion limits options, the liquid blood/vomit/gore that spews about and transforms people is almost identical to the way such bodily fluids are depicted in South Park, which takes away from that feeling of originality. The voice work is also fairly similar across the board (with Rolfe and Natalie clearly standing apart from the other characters) and delivered in flat tones that feel like it’s meant to be dry wit but comes across more like affectless speech.

And that’s a shame because there are some clever jokes and good dialogue in ATTACK OF THE DEMONS’ script that is squandered by these detached voices. It’s pleasing to see that there are references to horror movies, video games, and bands that aren’t literal references to real existing properties (there’s no posters for THE THING, or Frogger game, or Slint being on the festival’s lineup). Too often those signifiers are used as winks and ways to let audiences know that the filmmakers are just like them. Instead, Power and Petersen use stand-in titles and images for games and films (though there is a brief partial glimpse of a Fangoria cover, but that can slide because there aren’t many options for that type of thing). And for the longest time I was ecstatic to see there weren’t characters or places named after horror icons which has gone from cute gimmick to overwrought trope. But then someone shows up named “Stuart Combs” carrying an ancient tomb to stop the marauding monsters. Again, there are just a couple of exceptions of the otherwise welcomed avoidance to using these established and beloved properties.

ATTACK OF THE DEMONS possesses a frenetic energy akin to Lamberto Bava’s DEMONS movies and the childlike exuberance of some fantasy world committed to paper with colored pencil and unencumbered imagination. The geography of scenes is all over the place — but that isn’t meant as an insult like when action films are poorly shot or edited so there is no sense of people’s spatial relationship to each other. Instead it’s “and then…they come upon a rickety bridge!” or “they climb these massive towers (that we haven’t seen before)!” Inclusion of a grappling hook, giant bear monsters, and sudden mythology and properties of the demons makes it really feel like this kid telling his super awesome horror story while hopped up on Pixy Stix and Jolt Cola. Which is incredibly endearing… but also robs the more dramatic moments of any real impact.

Another engaging element of ATTACK OF THE DEMONS is establishing the backgrounds/interests of the three main characters, but then drops that thread pretty quickly into the story. It never really pays off save once — which is telegraphed so hard that it may lead to groaning. Why have a horror expert if he can’t inform others about what’s happening? Why have a video game junkie if he’s not good at using those skills for something? Why not have Natalie have a knack for lyrics or ambient sounds and thus able to read spells or do some sort of audio magic? Once more, there’s a clever idea that has the makings of being executed in a smart way that ultimately falls apart later.

Power and Petersen have made something absolutely unique. Even with all of the comparisons above, there is nothing else out there that combines all of these influences in this particular way to present them in this specific manner. That alone may win over audiences that love it far more than this reviewer did. John Dixon’s score is also worth noting as it moves across genres from the doom entrenched synth rock of the ‘80s Italian monster flicks to the plucking guitar of the early ‘90s indie dramedies. This collision of styles, tones, mediums, and more is unlike literally anything else out there. It’s just a shame that ATTACK OF THE DEMONS, with all of its imaginative innovations, constantly gets in its own way to capitalize on those promising combination.

ATTACK OF THE DEMONS, from Dark Star Pictures, is now in select theaters and will land on digital/VOD on November 3.