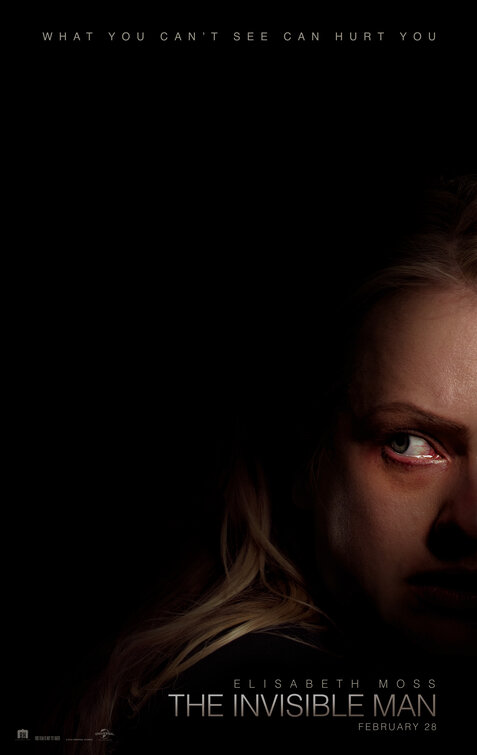 Though the remake fad has begun dying down, save for those extremely oddball remakes that are revisiting films previously remade within the window of the 2000s (there’s ANOTHER version of THE THING coming down the pike), titles still occasionally to get the facelift treatment, and when this happens, people never fail to bemoan the unoriginality of Hollywood. Then there are those who are quick to remind all the bellyachers that remakes have been part of the studio system from the very beginning. Vincent Price’s most famous film, 1953’s HOUSE OF WAX, was itself a remake of 1933’s MYSTERY OF THE WAX MUSEUM, and Humphrey Bogart’s most famous noir film, 1941’s THE MALTESE FALCON, was the third screen adaptation of Dashiell Hammett’s novel. These defenders will also remind you titles like John Carpenter’s THE THING, David Cronenberg’s THE FLY, and Philip Kaufman’s INVASION OF THE BODY SNATCHERS — three of the most celebrated genre films of all time — are also, technically, remakes. While that’s true, it’s also a disingenuous comparison, being that those particular remakes were born during an era where the originality of the idea was the thing leading the charge, and during a time when studios were more daring and allowed their filmmakers to have more of a voice. Sure, at the end of the day, it’s always about making a profit, but there was a time when studios wanted their films to be good and make money, which isn’t something that can be said today. Carpenter remaking a film from his idol Howard Hawks or Cronenberg remaking a film known for campiness and infusing it with his infamous penchant for gooey body horror isn’t the same thing as picking some guy whose only experience was directing a string of music videos and saying, “I dunno… wanna remake THE HITCHER?” Leigh Whannell’s update on THE INVISIBLE MAN, one of many horror films produced by Universal during the 1930s and a proud member of the “Universal Horror Monster Classics,” can stand proudly alongside the likes of those maverick filmmakers who spearheaded remakes because of the idea they had, not because it was easy product with street value on which studios could make another quick buck.

Before sitting down to tackle Whannell’s remake of THE INVISIBLE MAN, I decided to preempt my viewing by giving the 1933 original another go. By doing this, I thought I could refresh my memory on the basic plot, the character constructs, and the trickery involved to see what Whannell had decided to borrow versus discard. Well, besides the basic concept and the name “Griffin” (along with a loving nod to Claude Rains’ bandage-wrapped face from the original), Whannell’s script isn’t a lazy rehash. It’s an entirely new take on the property, as well as the concept, updated with gusto for the tech-savvy generation as well as containing a respectful adoption of the long-in-the-making #MeToo movement. With the modern update being about a victimized woman named Cecilia (MAD MEN‘s Elisabeth Moss) fleeing from her abusive partner, Adrian Griffin (THE HAUNTING OF HILL HOUSE‘s Oliver Jackson-Cohen) in the middle of the night in pure fear, as well as later disclosing the awful treatment she endured at his brute hands and emotionally manipulative mind, it’s hard not to make the connection. Indeed, from the film’s opening moments, and performed in total silence without the use of dialogue, how Whannell films and cuts around Cecilia’s MacGyver-ish premeditated escape from their palatial, oceanside estate, the suspense is already mounting, even though we have only just met these characters, and are, so far, lacking any kind of background or history on who these people are or what their dynamic is. All we know, based on Cecilia’s extreme apprehensive sneaking and her weary looks at Adrian’s sleeping form, is that whatever’s happened to her over the course of months or years is very, very bad. 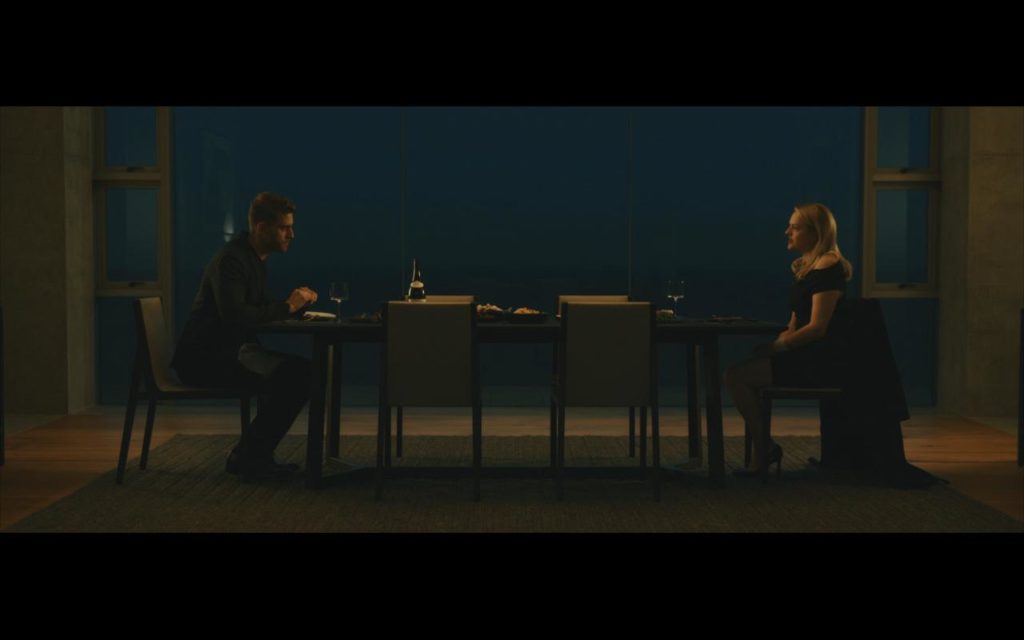 From then, as Cecilia attempts to rebuild her life and disclose to her sister, Emily (Harriet Dyer) and friend James (Aldis Hodge), who has invited her into his home to allow her time to recover from her ordeal, the awful things she’s experienced while living with Adrian, they are, understandably, sympathetic. However, in that perfectly ironic horror-movie vindictiveness, when Cecilia begins to suspect that Adrian, who is later said to be deceased following a suicide, begins stalking her, somehow, in an unseen, invisible form, of course no one believes her. She’s been through a lot, after all — walked away from a poisonous,  “narcissistic sociopath” who’d shattered her psyche with physical, emotional, and sexual abuse — so her claims of an invisible stalker are dismissed as signs of post-traumatic stress. And at first, Whannell is wise to keep the unseen Adrian as nothing more than paranoid glances down empty hallways or corners, and not always from Cecilia’s point of view, but often from that of the audience. The camera will sometimes aimlessly drift away from her, TAXI DRIVER-style, as she busies herself on a laptop, or leaves the room to call James’ daughter, Sidney (Storm Reid) for breakfast, and as the audience’s point of view lingers on nothing at all, the longer that camera lingers, the more we begin to question if Cecilia has actually been through a lot, or if there is something to her claims. This misdirection never lets up, however, and after it’s revealed that Cecilia’s not crazy — that her genius-minded, optics tech guru former lover has, indeed, somehow constructed a way to go unseen, that paranoia of “is she crazy?” becomes replaced with a new paranoia: “is she ever going to be safe?”

Whannell began his directorial life with INSIDIOUS: CHAPTER THREE, an uneven film that still managed to improve on its series’ immediate predecessor, before moving onto the techno punk cult classic UPGRADE, which saw his skills as a director with a confident style and singular vision improve with drastic results. And now, THE INVISIBLE MAN sees him at the height of his still-newborn directorial career, as he’s enjoying the same better-and-better trajectory previously employed by John Carpenter, whose consecutive run of DARK STAR, ASSAULT ON PRECINCT 13, and HALLOWEEN easily showed the evolution of a director honing his craft. (As of this writing, Whannell is tapped to update Carpenter’s ESCAPE FROM NEW YORK, a remake that’s been circulating the Hollywood system for almost a decade; if someone has to do it, I’m relieved it’s him.) Horror directors can show you every ghastly, bloody, dripping image they can concoct, as it doesn’t take much imagination to think of something that falls within the confines of the generic term “scary.” What Whannell does, instead — knowing that his movie maniac is an atypical antagonist in that there’s no dripping-faced specter or Halloween-costumed killer to constantly show lurking in the dark or on the other side of the door — is rely on what doesn’t appear to be there at all, even though we all know better. Whannell can somehow turn a long shot of a skillet with simmering eggs and bacon or an Uber driver taking WAY TOO FUCKING LONG to turn his SUV around into something that preys on the audience’s nerves. It’s scary when we can see the killer chasing the potential victim, but it’s scarier when we can’t, because the indication of said victim’s proximity to danger is being withheld from us. We simply don’t know where Adrian is any more than Cecilia does. 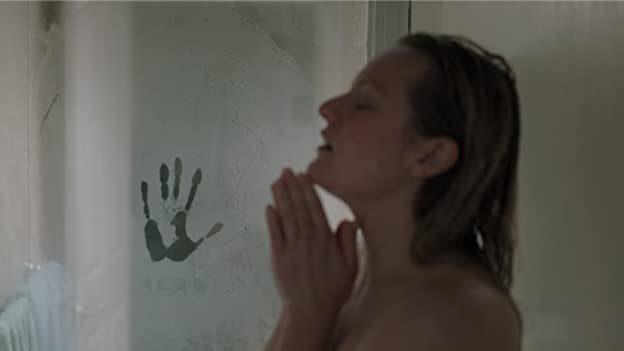 It’s seldom that we see Elisabeth Moss take on this kind of role in such a mainstream film; though the character of Cecilia echoes that of what we’ve seen from her in her two most high-profile roles in MAD MEN and THE HANDMAID’S TALE, in that Cecilia is both an embodiment of the ornamental but dismissible girl living under oppressive environments even after she seemingly escapes from her white-collar prison. Not only that, she’s tasked with applying those traits to the more commonly known genre archetype of “the final girl.” Seeing her find her “voice” (so to speak) halfway through the film once she’s confined to a state hospital, it’s hard not to envision Whannell being inspired by another of cinema’s most beloved and well-known female bad-asses: that of Sarah Connor (Linda Hamilton) in the TERMINATOR series. Once Cecilia begins taking back her life from Adrian by drawing him out of the invisible shadows utilizing his one weakness, Cecilia embraces her inner Sarah Connor. That her confinements are similar to the brightly lit, sterile environments of Pescadaro State Hospital in TERMINATOR 2: JUDGMENT DAY (and especially once the invisible threat begins massacring the hospital’s security staff one by one a la the police station shootout from THE TERMINATOR) was either a happy accident or a knowing inspiration, and a nod to the cinematic femmes who forged the path Cecilia has made it her mission to walk.

Universal brings THE INVISIBLE MAN to life with its stunning AV presentation on 4K UHD. Despite its dreary plot, Whannell wrenches a lot of beauty out of New South Wales, Australia (standing in for San Francisco), from the anally perfect Griffin house to the beautiful overhead drone shots of the city’s coast. It also offers a respectful amount of special features, including interviews with all key personnel, a ten-minute segment that focuses entirely on Whannell’s work and philosophies as a director, and a look at the different characters. Thankfully, unlike their release of UPGRADE, Universal have also included a feature commentary track with Whannell going solo. If you’ve never listened to a commentary track with him before, please do so, as it’s an example of what every commentary track should be: filled with information and anecdotes about the film’s production, the different inspirations that informed the production design and visual look, and Whannell’s quippy and charming self-effacement. By the time the track is over, you’ll be wishing you were friends with him. 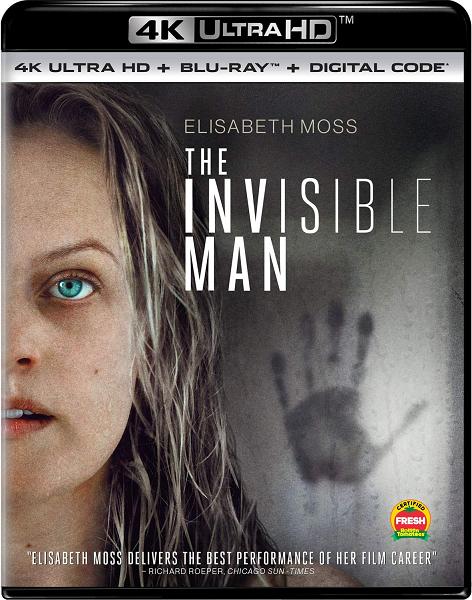 The 4K UHD special features for THE INVISIBLE MAN are as follows:

HDR PRESENTATION OF THE FILM

MOSS MANIFESTED – Elisabeth Moss describes the physical and emotional challenges she faced while portraying Cecilia, a woman whose truth is constantly questioned by those around her.

THE PLAYERS – Filmmakers and cast provide an in-depth analysis of each character and how they interact with the unseen terror of THE INVISIBLE MAN.

TIMELESS TERROR – A behind the scenes look at how writer/director Leigh Whannell re-imagined this iconic character through the lens of modern technology and socially relatable themes.

If the dissolving of Universal Studios’ previous plan for their Dark Universe, thanks to Tom Cruise’s hilariously stupid take on THE MUMMY, is what led to Leigh Whannell’s THE INVISIBLE MAN, then I can only be grateful. And I can only hope that Universal has taken adequate notes and will be applying the so-far successful micro-budget Blumhouse approach to all the horror properties they plan on updating: find a talented filmmaker, give them free reign to make a horror film that respects those 1930s classics, and stay out of their way. Like this new iteration of THE INVISIBLE MAN, it has the potential to gift the audience with a new string of feisty, smart horror films that they never saw coming.