Horror games seem to be having a moment across the board (pun intended! deal with the pun!). In video games there’s the latest Resident Evil remake, Predator: Hunting Grounds, or the upcoming Maneater, amongst other titles. Board games have their own offerings like Lucidity, They Live: Assault On Cable 54, Horrified, and even The Shining are all out for horror nerds to get some blood splatter on their dice. While social distancing has made game nights with friends more difficult, there are still plenty of ways to play these games over the internet via Zoom or Skype, or other clever solutions. There are two new games (well…one game and one expansion on a game) that have hit Kickstarter recently and are deserving of a glance from the horrorhound faithful—including a game that can be played solo! 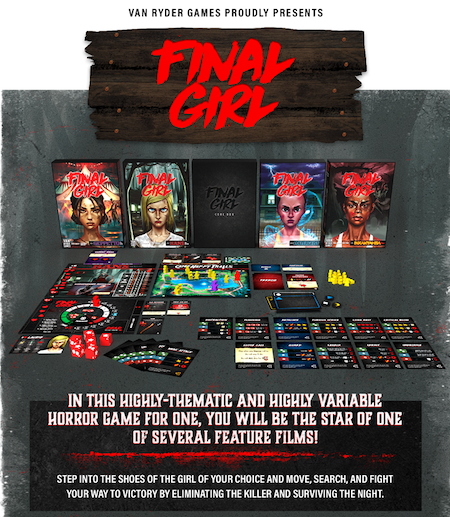 From Van Ryder Games (the work of A.J. Porfirio, Evan Derrick, and Tyler Johnson) comes Final Girl—a board game meant for a solo player as they take on different classic horror movie scenarios to fight off slashers and other monstrous villains to reign supreme over these scary adversaries. The initial game offering was funded in just two hours on Kickstarter, but has been adding more and more stretch goals that sound incredibly exciting.

It’s a pretty intriguing set up that looks like a lot of fun. The gameplay seems very straightforward (and I believe would be able to expand to multiple players) and would be an enjoyable way of vicariously living through some of horror’s greatest tropes. The art is amazing, and the fact that each add-on is basically called a “Film” with its own type of environment, central badass lady protagonist, and diabolical fiend to over come. Hopefully there’ll be some test versions sent out to board game afficionados and nerds soon so folks can hear about how it actually works.

But it’s an ambitious idea with lots of cool elements that show Van Ryder Games’ clear love of the genre and abundance of imagination. If interested, please go here to back it before May 15, 2020! 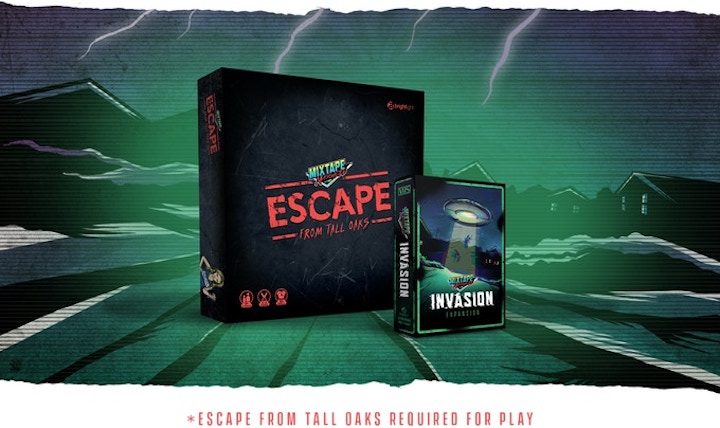 Mixtape Massacre was a pretty major hit in 2016 with board game enthusiasts, nostalgic nerds, and horror geeks alike. Taking well-worn stories, tropes, and archetypes from slasher films of the ’80s and ’90s, Bright Light Media was able to craft a fun time that was easy to play filled with cool art, clever concepts, and fun winks to genre enthusiasts. The first one started with players being the various boogeyman haunting the quaint town of Tall Oaks. There have been several expansion packs with new characters, abilities, and locations since then—including Escape From Tall Oaks, which was a sequel in which roles were reversed and now it was time to take on this nightmarish figures.

Again: please note that players will need to have Escape From Tall Oaks in order to use the Invasion expansion. While it will sound like feint praise to say this is more of the usual, in the case of Mixtape Massacre, that’s a good thing. It means the humor, creativity, engagement, and fun of the previous incarnations continues with the latest expansion. Obviously this adds new levels to gameplay and opens up for other possibilities for new threats and character interactions—so it does what all great sequels do, keeps what you love without being stagnant.

If you are interested in the Invasion expansion, please go here to back the project by May 14, 2020!

What do you think of these games? What are you currently playing in your bunker?

Do have a crowdfunding project that
you think more people should know about?

Please write it in the comments below or
write to us at dailygrindhouseonline@gmail.com.