Home  ⁄  The Wire  ⁄  Finding the Silver Lining: 10 Years With ‘A NIGHTMARE ON ELM STREET’ Remake

In thinking about Freddy Krueger, the calcified boogeyman sprung from nightmares to terrorize the kids of Springwood in director Wes Craven’s lucid slasher, A NIGHTMARE ON ELM STREET, I couldn’t help but think how terrifyingly prescient he is. After all—his invasive dream snatching reads even more inescapable during these difficult and trying times, as millions of people are forced to remain home under strict quarantine guidelines due to the novel coronavirus; an unseen yet deadly force that can be nowhere yet everywhere all at once. Building fear and paranoia that doesn’t strengthen the pathogens but weakens communities, infects neighborhoods and corrupts what it means to feel alive. While it’s far more real and serious than any boogeyman, the pandemic’s parallels to Freddy Krueger can be felt even when we think we’re safe in the comfort of our own beds.

As quarantine nears its seventhish week (anyone still counting?) and continues to dictate how we think, feel and with whom we interact, Platinum Dunes’ remake of A NIGHTMARE ON ELM STREET celebrates its 10th anniversary today, breaking social distancing to remind us of its misshapen existence within the wide world of remakes. 2010’s A NIGHTMARE ON ELM STREET remake—directed by Samuel Bayer whose extensive resume includes Nirvana’s ‘Smells Like Teen Spirit’ music video—is the ninth film in the franchise (including FREDDY V. JASON, which by this standard is a stoner-bliss masterpiece), whose many entries since it awoke in the fall of 1984 saw its central villain go from a ghoulish machination of the mind to a court jester with claws. 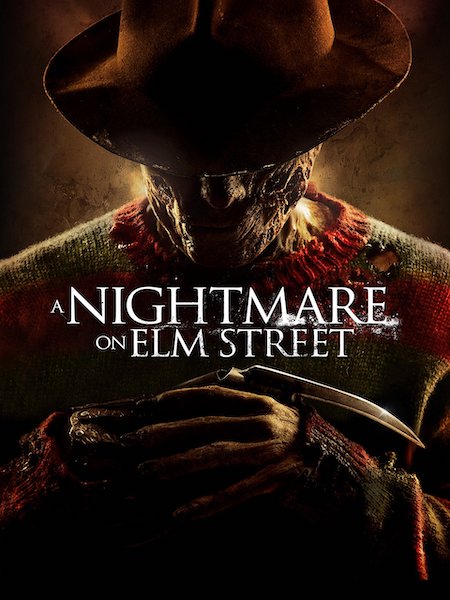 In an attempt to inject the franchise with a heavy dose of taurine, ginseng, and caffeine, producer Michael Bay and Platinum Dunes’ Brad Fuller and Andrew Form sought to remind everyone how truly scary Freddy was with an aesthetic approach to the icon that closely resembled an actual burn victim. 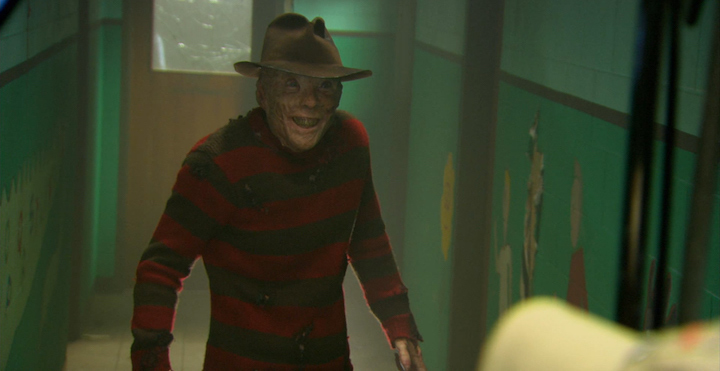 In the process, they looked to erase a history of one-liners and pop-fueled gags (FREDDY’S DEAD and its Power Glove is an all-timer, if you ask me) with a brooding atmosphere and a garishly brown color palette, evoking a visual style that’s more in line with Platinum Dunes’ THE TEXAS CHAINSAW MASSACRE from 2003. 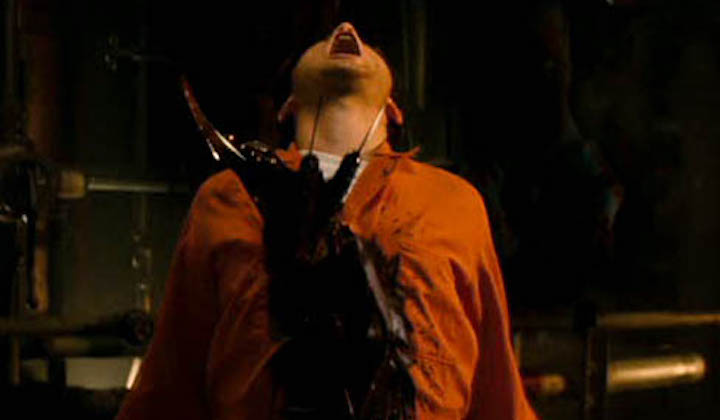 But rather than beat a dead Fred as they say and toss more kerosene onto the very fire that turned pedophile custodian Freddy Krueger into everyone’s favorite boiled potato, I thought I’d spread some much needed positivity during these terrifying times by highlighting a scene, or rather, discovering the silver lining in 2010’s remake of A NIGHTMARE ON ELM STREET.

The silver lining to what is a rather bloated, tattered, and wearied film that still somehow managed to become the highest grossing Elm Street entry—dragging in $1.5 million Thursday night, a record for the horror genre—arrives within the first 10 minutes as we open on a rain soaked dining car. “Springwood,” the town harboring an insidious past, lights up the night with a neon red as another sign reading “Hot Coffee/Good Food” casts shades of green.

None of this is particularly important; especially since the prospect of sitting and eating breakfast at a 24/7 roadside diner is far from reach. Yet its colors wash the film in a seductive vibrancy, one that’s quickly dismissed throughout the rest of the film for tones as rusted as the kitchen’s obscene dish pit.

In fact, we aren’t even in Springwood, but the nightmare of Dean (Kellan Lutz), a built jock who looks like he’s been fighting off an endless wave of Zzz’s for the past 72 hours. Lutz, whose lumber-yard frame would typically grant him safe passage in most slashers the way Jared Padalecki does in Platinum Dunes’ reboot of FRIDAY THE 13TH, awakens to find himself adrift in a Neverland of fear. 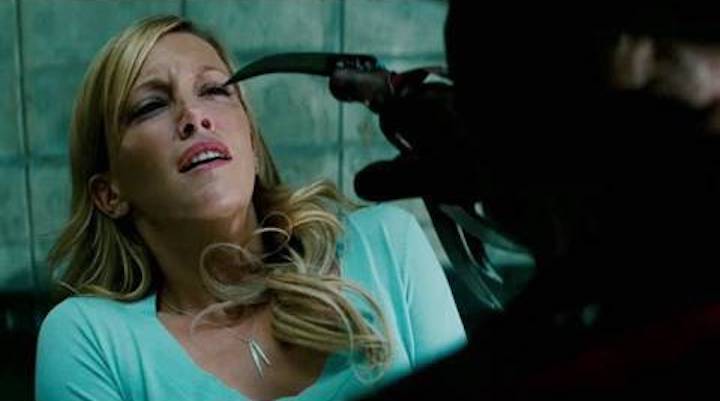 Except this echo chamber of horror isn’t a camp-side shack by the lake or a pirated cove where rules are rules, but the bushwhacked mind of a teenager who has run the gamut on bottomless coffee cups. It all adds an element of surrealism to an already surreal sarcophagus of bedlam fear, where expectations are as fleeting as the reality Dean desperately needs to cling to.

Watching this scene now as Dean drifts through the diner—first in search of that waitress with the coffee pot and then someone, anyone to remind him of what’s real—plays even more unsettling as a reminder of how empty restaurants, storefronts and even bus terminals have become. We are, in the gravest sense, like Dean, stumbling through an alternate reality or dream world where nobody is around, and those we do encounter hardly give us the time of day for fear of borrowing the very thing that could be killing us.

As Dean makes his way past the red light, green light of the neon signs warning him to stop and smell the proverbial coffee, he finds himself in the back of the diner between the cold interior of the kitchen; a steely counterpoint to the originals steam fueled boiler room. Flames lick the ceiling as pigs feet and heads fill pots cluttering the stove-top (accented by the skull of a horse still slick with muscle) evoking the butchered griminess of a certain Texas massacre. This isn’t just the Springwood of a leering bastard son of 100 maniacs, but the Springwood of Platinum Dunes, who saw the nail bending mire of their first remake turn maggots into millions.

What works so well about this cold opening is how unceremoniously it introduces Freddy, because after nearly three decades and almost $500 million in box-office revenues, the world is well aware of his iconic stature. It’s one Jackie Earle Haley (LITTLE CHILDREN) embodies with the slightest of frames, placing his sinewy Jagger-like body against Dean the way Commodus squares off against an injured Maximus in GLADIATOR‘s climactic showdown.

Haley, who clocks in at a meddling 5’5″—a good five inches shorter than Robert Englund—manages to feel strikingly larger than life, thanks in part to effective quick cuts courtesy of Glen Scantlebury of BRAM STOKER’S DRACULA fame, that filter the air with an uncertainty that feels all too real in the pandemic age.

As I mentioned, he’s everywhere and nowhere, and the first 10 minutes revel in these shifting dream states, bringing Dean back to reality after he suffers a deep gash on his palm after confronting Freddy. There’s some filler in between that introduces almost the entirety of the films Haute Topic Couture cast, yet it’s the final moments of A NIGHTMARE ON ELM STREET’s opening that takes all of its neon soaked disturbance and cranks it to eleven.

Suddenly falling back asleep—a side effect of micronaps, which screenwriter Wesley Strick will painfully elaborate on—Dean finds himself on the wrong end of a bladed glove, as Freddy springs into action against the protective edge of Dean’s steak knife. “You’re not real. You’re not real!” he decries, which the remnants of the diner see as the last words of a mentally unstable high school teenager who’s willing to take his own life in order to escape the scorched specter of his mind.

Except for fans of A NIGHTMARE ON ELM STREET franchise, the audience, and especially Dean—Freddy has always been real. Whether he’s the unspeakably charred embodiment of the pop-culture zeitgeist, a metaphor for the real life terror that prays on our traumatic fractures or even the populace killer that claws at the way we think, feel and even sleep, Freddy Krueger has never been anything else.

And as Dean unwillingly plunges the steak knife into his own throat and begins vigorously sawing in front of his classmates, it’s clear that this is what the horrors of A NIGHTMARE ON ELM STREET have always excelled at; the blurred lines between reality and dreams, as well as our inexpressible confrontation with the terrifying spectres of our own past. It’s just a shame the rest of the film never quite lives up to its opening.