A who’s-who of horror and sci-fi team up for a brand-new kind of Creepshow… TERROR TALES!

From writer-director Jimmy Lee Combs, a film that brings together cast members from FRIDAY THE 13th, MANIAC COP 1 & 2, George Romero’s THE CRAZIES, Wes Craven’s THE PEOPLE UNDER THE STAIRS, SLEEPAWAY CAMP, CRITTERS 2, and more, coming to VOD on January 8th from High Octane Pictures! 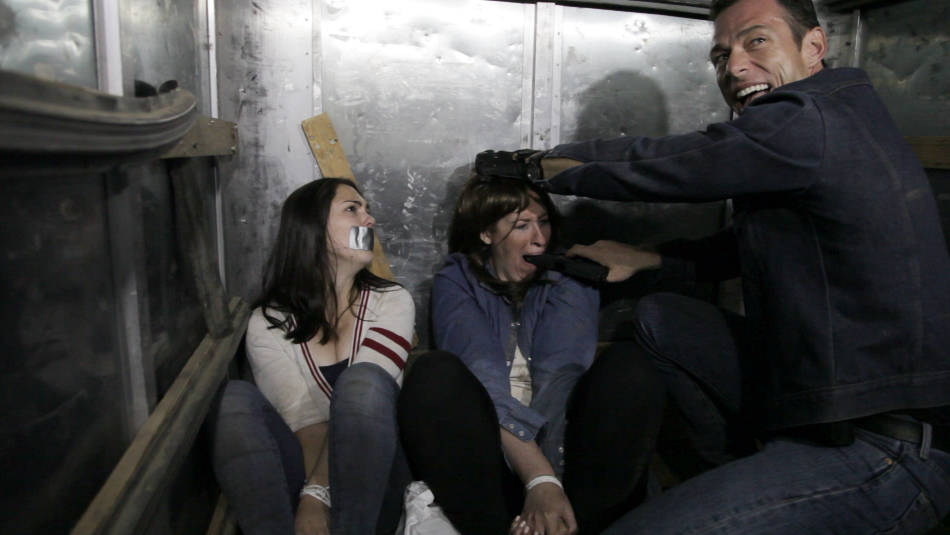 When Michael wakes up he is horrified to find that he is riding shotgun with a psychopath (Christopher Showerman, Supergirl) who reveals to him that his wife and daughter are held captive in the attached cargo trailer. The trailer is rigged to release a deadly toxin when triggered by a switch in the car. Thinking of his family’s safety, he cooperates with everything the psychotic driver asks him to do, even if it means breaking the law.

During this bizarre ride, the driver subjects Michael to three horrific tales of the macabre including a demon that takes a mother (Lynn Lowry, SHIVERS) on a journey of self-discovery and reveals to her the horrifying truth behind her son’s suicide. The next tale transpires in the ’80s, where a detective is hot on the trail of a serial killer known as The Sledgehammer (Jonathan Tiersten, SLEEPAWAY CAMP) who is terrorizing a video store owner and his wife. In the final tale, an evil deity (Yan Birch, THE PEOPLE UNDER THE STAIRS) is using the human body as a host to possess its victims. When the deity destroys one victim, it jumps to another, causing an epidemic of possessions being reported.

With a burning desire for the truth behind his abduction and the safety of his family, will Michael have the will to survive the madness? Your sanity will be tried and tested in TERROR TALES.

In the tradition of CREEPSHOW, TERROR TALES turns up the terror this January!

Well done on the new film. How long ago did you kick it off?

Thank you, much appreciated! TERROR TALES began filming in October of 2015, with the “By Proxy” segment starring Lynn Lowry. 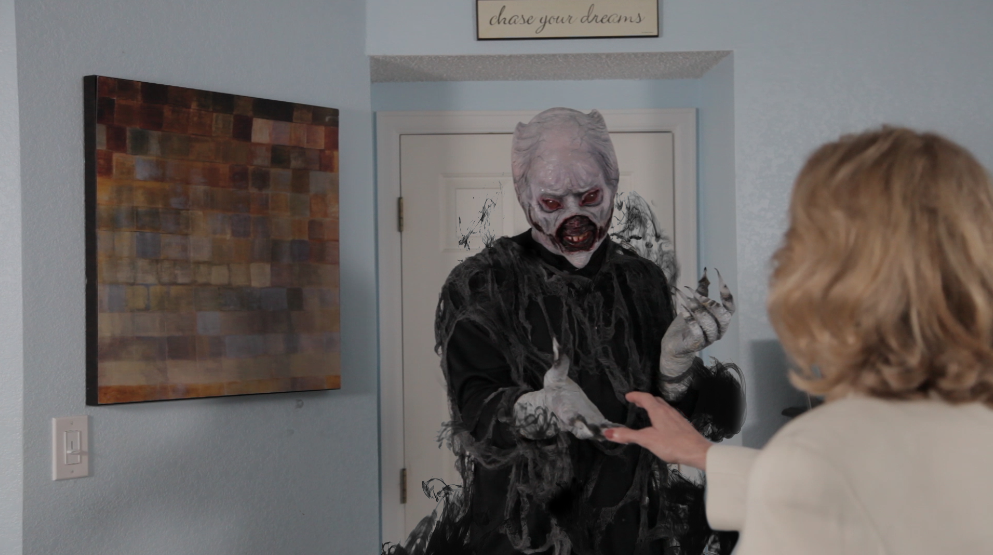 Was there a particular reason you wanted to do an anthology movie?

First and foremost is my love for the horror-anthology genre. I thought if I’m going to make horror films, then at some point, I have to do a horror anthology and contribute to the genre that is near and dear to me. As it turned out, I was beginning production on a horror-comedy web series but really wanted to crank out another feature film at the same time, so it was fairly manageable to film the web series while shooting TERROR TALES segment by segment. Plus I’ve always been fascinated with being able to tell multiple stories within a feature film; it adds diversity to a film that’s not found in a conventional feature.

Which of the short films did you find easiest to write?

The “Radical Video” segment, without a doubt, because it’s a story in the film that I identify with the most, and I know a lot of fans who watch this segment will feel the same way, because they are all mostly from my generation, the one that grew up going to mom-and-pop video stores back in the 1980s and 1990s. “Radical Video” is my love letter to the video-store era that we all are sorely missing now that they have gone out of business. I miss the sights, smells, sounds, and joy of holding a physical copy that came with the video store experience. You can never get that experience with digital. Also, I’m a huge fan of ’80s horror films, video nasties, and slasher films of that era, so it was great including that aspect as well into “Radical Video.” And truth is; I pretty much live in the past, so it was incredibly easy to write.

And in terms of financing, was the film relatively easy to get up after your success with HANS CRIPPLETON?

Financially it was still a bit of a hurdle, even after HANS. But it did help give me more credibility as a filmmaker who had a feature film under his belt that received distribution and was put out on the market. People had more confidence in me and my abilities, so they were excited to invest time and resources into TERROR TALES.

Did you shoot in locations, and use resources, that you already had access to?

Absolutely! In fact, that is one of the key ingredients when writing a low-budget screenplay. You write with locations you know you can get access to, especially ones that’ll add production value and cost little to nothing to attain. Of course, when you have an ambitious nature like I do, there tend to be some locations where you stop and ask yourself, “How the hell am I going to make that happen?” — but you will usually find a way and get creative in making it happen.

For example, I knew I wanted to have a set built for the “Radical Video” store so that we could have the luxury of shooting whenever we wanted, without having to be kicked out of an actual video store by a certain time, and it’s hard to find video stores now days. So one of our cast members was gracious enough to let us turn her basement into a 1980s video store.

I was lucky in the sense that as a video store was going out of business, I was able to attain a lot of product from them, which I was able to use as props in the “Radical Video” segment to make it look like an authentic 1980s video store. This basement also doubled for the Sledgehammer’s kill room and the padded cell from the “Epidemic” segment, which was super convenient and saved us a lot of time shooting.

Who was the biggest score of the film – cast wise – in your opinion?

Oh man, now that is a loaded question. They were all a big score to me, because I’m such a fanboy of each of their iconic horror films and performances. That being said, I will say that having Jennifer Runyon in the film was a nice score, because of her role in GHOSTBUSTERS as the college student opposite Bill Murray in the beginning of the film. Also, she is pretty much retired, so having her do TERROR TALES made it a very special experience.

The Driver is the bookend character – – can you tell us about him?

The Driver is crazy AF! What’s so appealing about this character is that he has James Dean good looks. Like seriously, the kind of guy a gal would be proud to bring home to meet the family. But under the surface, he is a psycho who gets off on other people’s pain and toying with them by holding something close to them over their heads.

If you look at serial killers like John Wayne Gacy and Ted Bundy, they put on this front, of living a normal life, all the while living double lives. The Driver is similar to Ted Bundy in that The Driver can use his good looks and charm to manipulate his victims into trusting him.

The Driver’s double life, if you will, is that he likes to prey on families road-tripping and abducts them so that he can tell his twisted tales. He keeps a man named Michael riding shotgun with him while threatening to kill his wife and daughter in the attached cargo trailer rigged to release a deadly toxin. So naturally, Michael is going to do whatever The Driver asks of him, to try and keep his family safe. This includes listening to his crazy tales. The Driver is our film’s Crypt Keeper, played perfectly by Christopher Showerman from The CW’s Supergirl and many who will remember from Disney’s GEORGE OF THE JUNGLE 2. George playing a psychopath, hell yeah!

Did the screenplay start with the characters or the storylines?

Generally when I write, it will start with the storyline, and then the characters will start to present themselves to me as I start fleshing the story out and considering which characters I can put into the situations of the story.

For example, the story for the ‘Wraparound’ tale came to me first when I was on vacation with my ex-wife, and we were in a drive-through at Culvers. The truck in front of us had an attached cargo trailer and I turned to my ex and said, “How creepy would that be if that guy had his family locked up in the back of his cargo trailer and was driving them cross-country and he’s stopping to feed them?” To my surprise, she indulged the story. As writers, that’s how it can happen for us, when we’re struck with inspiration… it just becomes a lot more twisted when you write horror scripts. 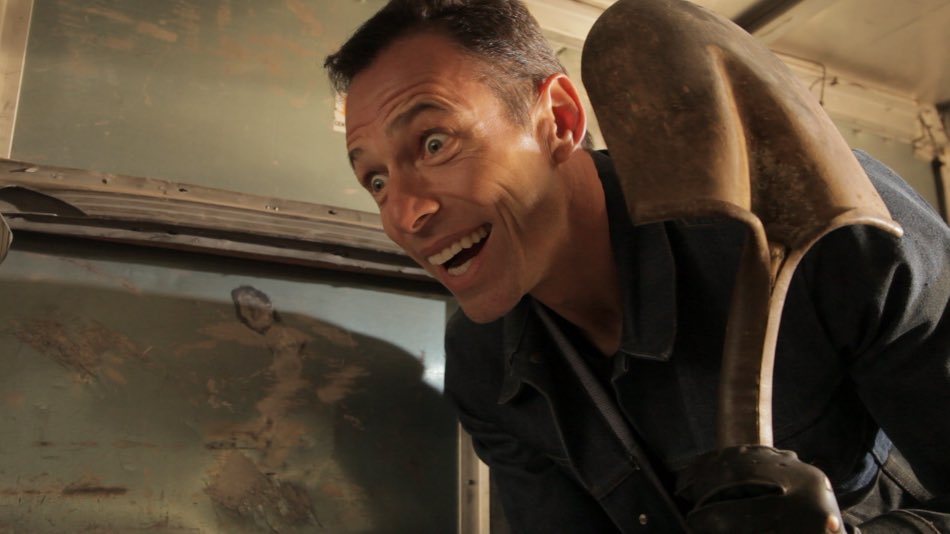 What did you use for blood on the flick? Corn syrup?

While I don’t recall using any of the handy corn syrup technique for blood, although I have on some of my past films, I do know there was A LOT of bottled premade blood used in the film. Not the cheap stuff in a bottle, the realistic-looking blood that the pros use. Our SFX artist, Kevon Ward, who was on the SYFY show Faceoff, had all the good stuff and knew how to whip up more blood when we needed it. I had a tendency of wanting more blood all the time!

Which of the stories do you enjoy the most in it, personally?

“Radical Video,” for the above reasons. Also because it was really important to me to make the segment authentically 1980s, as I like to call it. To the point where I was hospitalized with a hernia from all the heavy lifting of set props that I accumulated to make every frame ooze with 1980s authenticity. Damn furniture was built like a tank back in the day. It was worth it, though, and all the hard work that went into it definitely shows.

Can you see yourself directing a sequel if this one enjoys CREEPSHOW-like success?

Absolutely! In fact I already have a few stories written for a sequel, one of which is a rock-n-roll werewolf tale. And I have this idea of taking a more modern approach to horror-anthology storytelling in where like TRICK ‘R TREAT, all the stories intersect with one another and connect to tell one seamless story. SOUTHBOUND is another good example of this style of horror-anthology storytelling. TERROR TALES is definitely my love letter to CREEPSHOW and the Amicus/Hammer line of horror anthologies so I followed that old-school structure of telling separate tales with a wraparound story introducing each one. If TERROR TALES Vol. 2 happens, the stories will all be connected to one another and the characters. And of course I would love to round up another bevy of iconic horror actors… I’m looking at you, Robert Englund 😉