L.A based nerdcore artist MC Chris ismore than likely the reason you know what nerdcore is. The rapper is dropping a new album in September of this year, and while he looks to be bringing his love of the STAR WARS franchise among other geek properties as usual it looks like this time around he’s going to be tackling the son of a hundred maniacs Freddy Krueger of NIGHTMARE ON ELM STREET fame in MC CHRIS IS DREAMING and the single “freddy’s dead” is out to give you a taste of what to expect from the rappers latest full album release since 2014’s MC CHRIS FOREVERRR.

The single starts off with an eerie synth that wouldn’t sound out of place in a John Carpenter production before a slick drum and keyboard track comes in and MC Chris begins his blazing fast delivery of rhymes paying tribute to Wes Craven’s nightmare dwelling, wise cracking slasher along with referencing other modern franchises such as the Scott Cawthon’s runaway success FIVE NIGHTS AT FREDDY’S games.

MC Chris quickly crushes any sort of thought that he might have lose his knack for rap, the rhymes are fast, the beat is catchy and the hook which takes inspiration from the dreaded nursery rhyme from the film franchise is bound to get stuck in your head for days. Like his last release MC CHRIS FOREVERRR it sounds like this one is going to have an underlying theme that is much more mature than the subject matter let on. According to a brief interview with NERDIST he hopes people will walk away from this album feeling more courageous and start facing their fears not unlike Nancy and Kristin from the ELM STREET  franchise. Given his ability to deliver full songs paying tribute to one off characters such as STAR WARS’ Dengar, unless you happen to have read the now mostly non-canon extended universe novels, this sounds like it’ll be a treat for both fans of nerdcore as well as NIGHTMARE ON ELM STREET and horror fans. 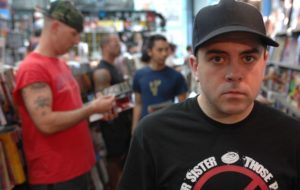 MC CHRIS IS DREAMING will be unleashed on September 30th 2016 to coincide with a nationwide tour.