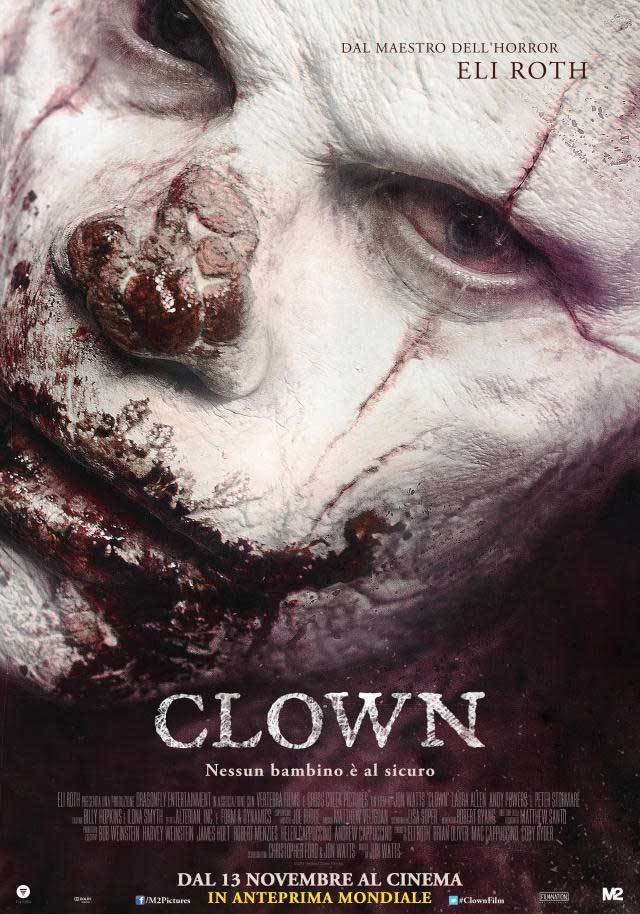 I couldn’t have been more excited to finally get to watch the highly-anticipated, Eli-Roth-produced horror movie CLOWN. The hype machine surrounding CLOWN has been going since 2010, when director Jon Watts made a faux trailer for it with a credit at the end reading, “From the master of horror Eli Roth.” Lucky for us, Eli Roth saw the faux trailer, contacted Watts, and agreed to help produce the full-length movie. CLOWN was finished in 2014, and screened internationally, but it was shelved domestically in the U.S. until 2016, where it received a very limited theatrical release — I’m guessing due to the fact it depicts violence against children. In Chicago, CLOWN played one theater for two days, and that was it. Thankfully, CLOWN made it to DVD and Blu-ray on August 23rd, thanks to Anchor Bay Entertainment. 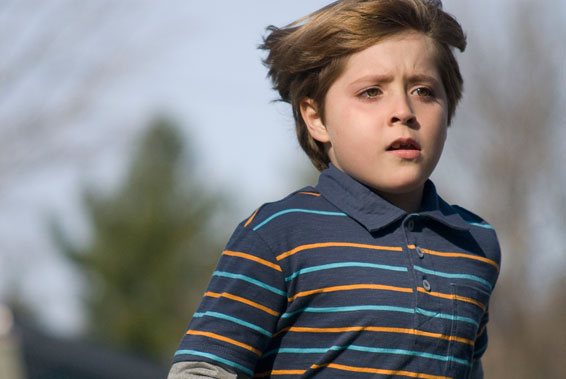 CLOWN opens with the sound of children screaming. It’s hard to tell at first if those are screams of terror, or excitement. Turns out it’s the 7th birthday party for Jack (Christian DiStefano), and the party theme is clowns. DiStefano plays the role of Jack naturally; his performance comes off as easy. It’s a real joy to see a young actor not come off as stiff or rigid. While the festivities are in full swing, Jack’s mother Meg (Laura Allen) gets a phone call from the party company that their clown was double-booked and won’t be able to perform at Jack’s birthday party. Meg, the perfect suburban mother, loves her son and wants the best for him. Fretting over the birthday clown cancellation, she immediately calls her husband, Jack’s father, Kent (Andy Powers). Kent is the kind of guy who will do anything for his family, who swears to make everything all right. In the midst of flipping a foreclosed house, while going through the left-behind belongings, Kent finds an old clown costume. He puts it on, plays the role of birthday clown, and he saves the day! The whole family feels like a real family, as if they all really love and care for each other. Great performances from everyone. 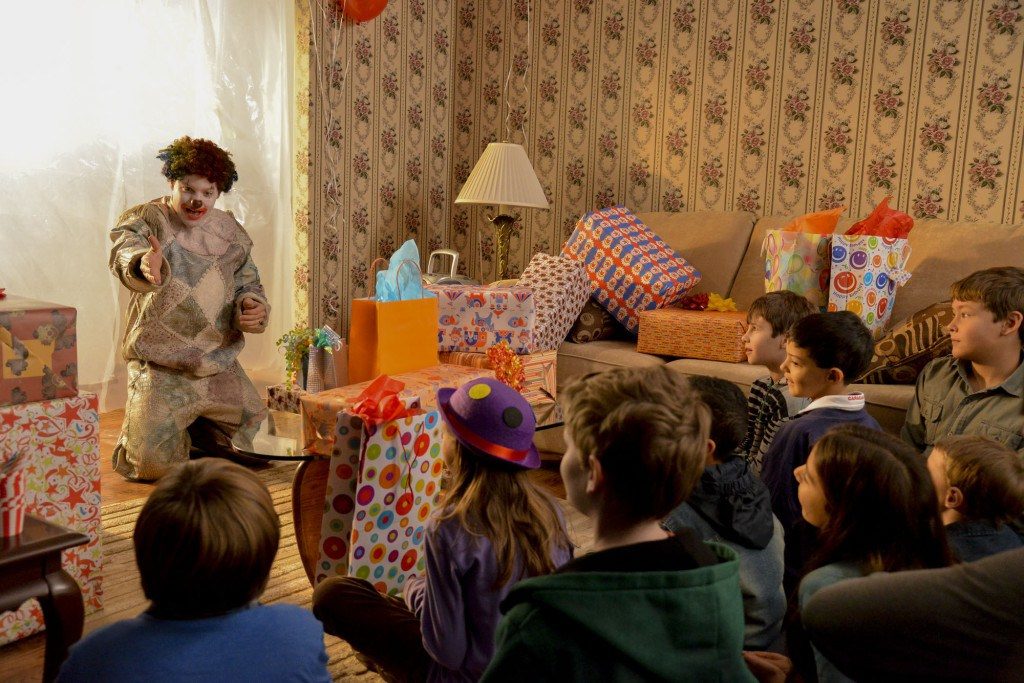 Exhausted, Kent falls asleep in the clown costume and makeup. The next morning, he finds out none of it will come off. My stomach sank for Kent. Having to go about his life as a clown is terrifying enough. Scenes could have gone really comedic, but CLOWN plays it straight. Kent gets frustrated and attempts to cut off the costume with a box cutter and an electric hand saw. Even for a hardy horror-viewing veteran, this scene is cringe-worthy. All the while, Ken’s stomach is rumbling. His hunger is growing, and no amount of food will satisfy him. 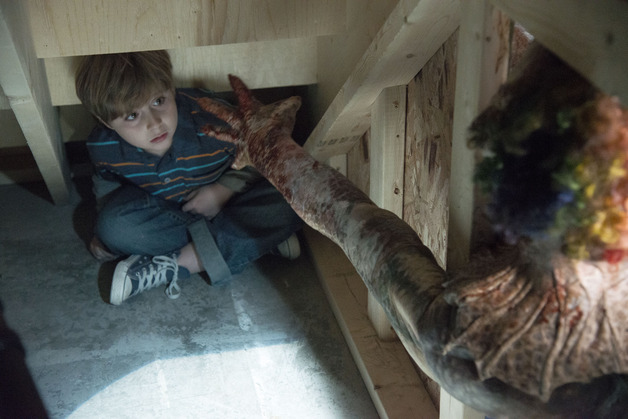 Unable to remove the clown suit, Kent seeks the help of vintage costume dealer Karlsson (Peter Stormare). It’s refreshing to see Stormare play a serious role in a genre film. He is one of the greatest character actors going nowadays, and all too often, he’s directed to act in a more humorous or campy way. Karlsson informs Kent that the clown suit is actually a demon that is slowly taking over Ken’s body, and he needs to eat children in order for the demon to leave his body. I can only imagine that realization that you are becoming a demon sinking in — how frightening that must be. Kent’s transformation sequence is something out of AN AMERICAN WEREWOLF IN LONDON, but thankfully somewhat less severe. CLOWN serves up a sort of body horror similar to Cronenberg’s THE FLY, with Kent’s teeth falling out, and claws forming. It’s fantastic to see mostly practical effects used over CGI here. 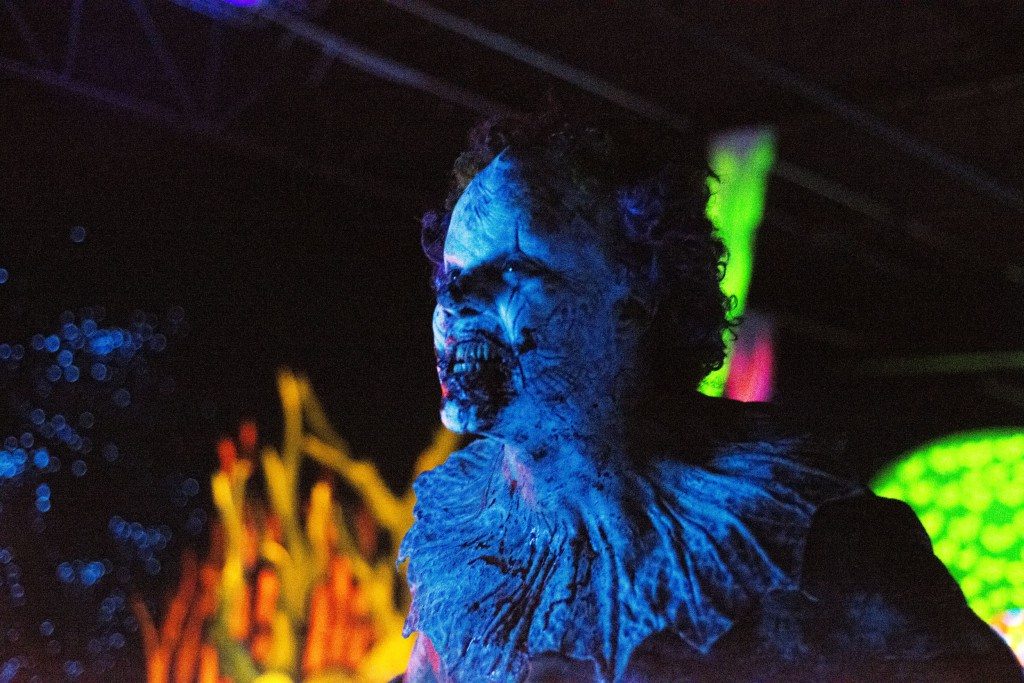 As Kent’s transformation from loving father to demonic clown tears apart his family, my heart broke most for their son Jack. Jack is a classic horror-kid character, who made me think of Andy from CHILD’S PLAY. Jack’s father Kent seeks seclusion, as to not further harm anybody, similar to the fallen clown character Javier in THE LAST CIRCUS, but his blood lust increases. He fights off his urge to eat children as much as he can, but it’s driving him crazy. His failed suicide attempts could have been comical, but I’m glad they are not played that way. All the characters are very believable, and you can’t help but feel bad for them. 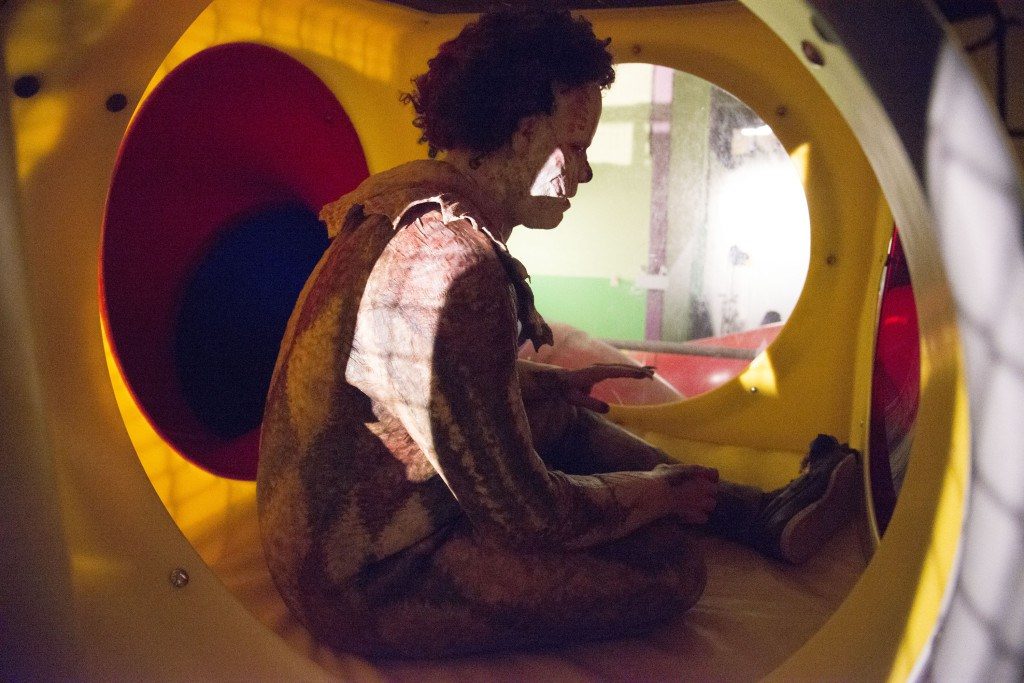 The third act sees Kent giving into the demon that is possessing his body and going on a child-killing spree. He kills off his son’s bullies at least, so he can’t be all bad, right?!? Turns out that Chuck E. Cheese makes the perfect hunting grounds for a demon clown looking to kill and eat children. Chaos breaks lose. blood, gore, ball pits, and plastic slides. insanity: I love every minute of the craziness. The lighting and set designs during these later sequences bring to mind THE GUEST. I’m going to leave it right there, because the climax shows that Jack’s mother Meg will do whatever it takes to save her family, in a final showdown that invokes THE SHINING in the best possible way.
My favorite sub-genre of horror films are killer clown movies, but there are very few demon clown movies. CLOWN is superb. It has an original story, with its own mythos,  great gore that isn’t overdone, and it is all played deadly serious, by an amazing cast. CLOWN is a chilling, cringe-inducing monster movie that has its roots in 1990s films such as JEEPERS CREEPERS, WISHMASTER, and WARLOCK. CLOWN was director Jon Watts’ first feature-length film — after this he made COP CAR and at this moment he’s making SPIDER-MAN: HOMECOMING — and I hope he returns to the horror genre. His unique blend of film noir and terrorizing thrills has me wanting more. HIGHLY RECOMMENDED! 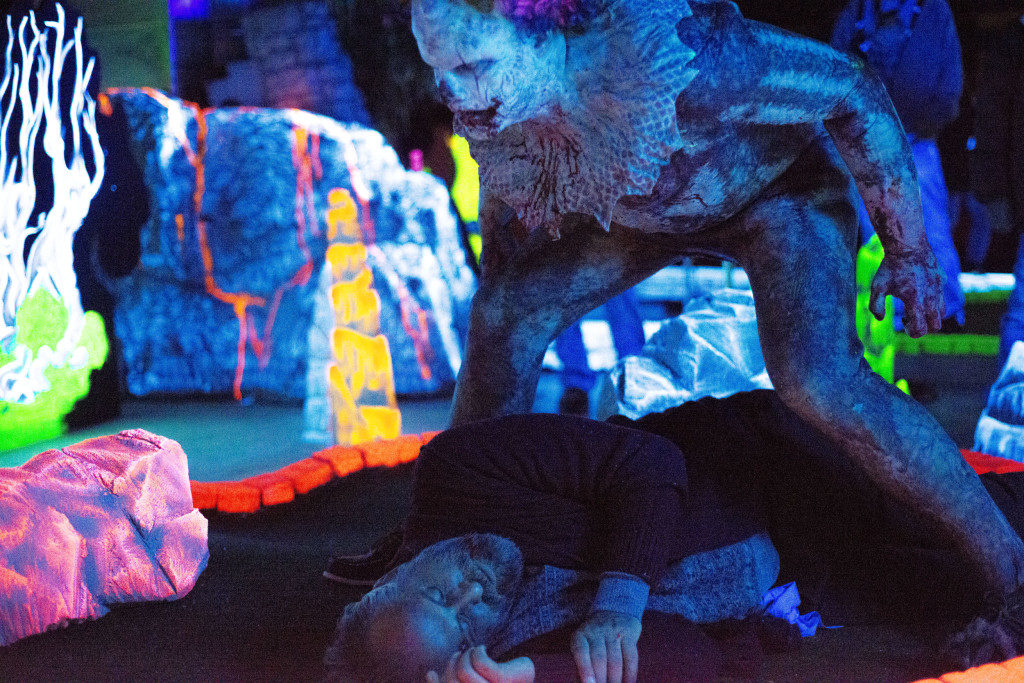 That said, with such a long wait, I expected more special features on the Blu-Ray release. The only special feature is a making-of featurette, hosted by Eli Roth. The documentary on the making of CLOWN is informative at least: Eli Roth is genuinely thrilled over the movie, the actors gush over each others’ performances, and it shows the work going into developing the mythos behind CLOWN and the creation of the special effects.
Don’t wait! Make sure you get your copy of CLOWN, out on DVD and Blu-Ray as of August 23rd. You can thank me later! 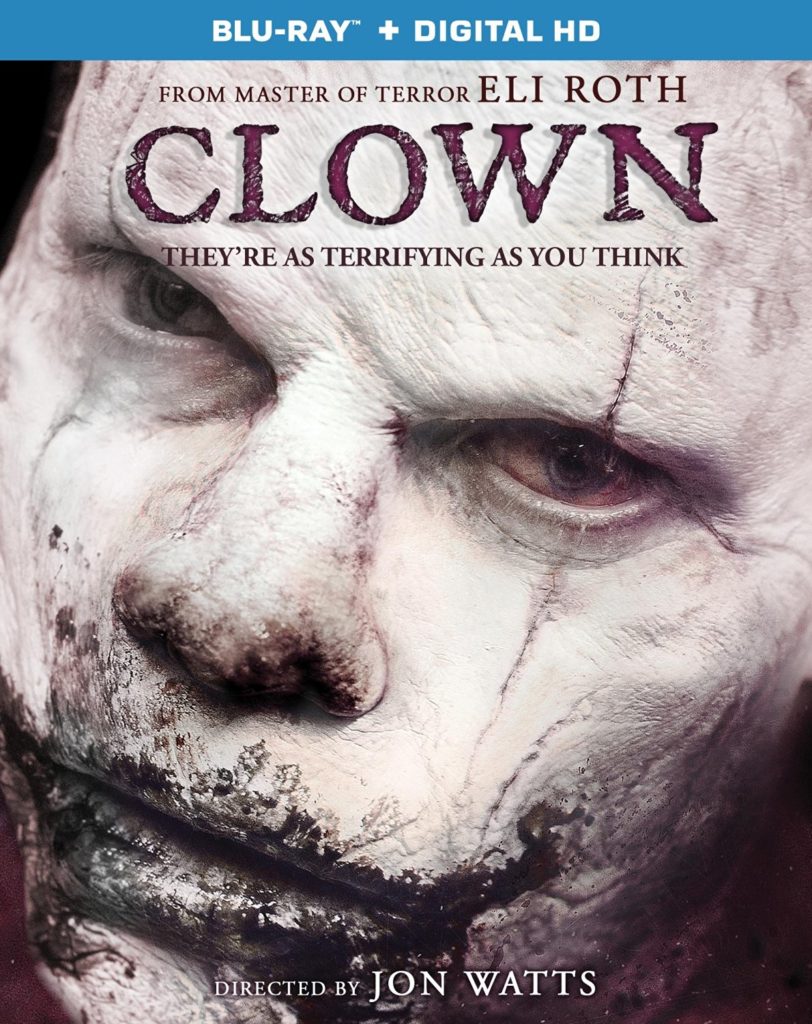