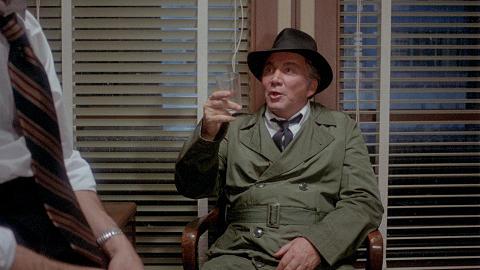 Anthony Spinelli was one of the best filmmakers in adult cinema of the 1970s and the 1980s, and his films have been represented on some of Vinegar Syndrome’s best releases. The most recent Spinelli release was his sci-fi sex epic SEX WORLD (1978), released in a limited Blu-ray/DVD/CD pack (it will be reissued on standard DVD in May), was one of the best hardcore films the company has released so far. That high bar gets cleared again with the release of Spinelli’s 1983 hard-boiled detective film DIXIE RAY HOLLYWOOD STAR.

The year is 1943, and the U.S. army has just taken Guadalcanal. Nick Popodopolis (John Leslie), a low-rent private detective and former cop, calls his old pal the Lieutenant (Cameron Mitchell) to report a dead body on the floor of his office. The body formerly belonged to Adrian (Juliet Anderson), assistant to former superstar Dixie Ray (Lisa De Leeuw). While the Lieutenant and his partner wait for the medical examiner to show up, Nick pours them all a drink or two and spins them the tale of how Adrian ended up dead in his office, a twisted story of deceit, betrayal, sex and money. And once his story is finished, some nasty secrets of some very important people will be exposed. In other words, all in a day’s work for a dick like Nick. Now, if he can just find a secretary who can answer phones and type…

DIXIE RAY HOLLYWOOD STAR is a solid hard-boiled pastiche that happens to be punctuated by lengthy hardcore sex scenes. Leslie is perfectly cast as the wisecracking, world-weary detective who just can’t keep his hands off all the willing women in his path. Cameron Mitchell is exceptionally convincing as a mean old bastard who would be just as willing to throw Nick in the slammer as listen to his story, if it wasn’t for that hooch Nick so generously provides. And Lisa De Leeuw is great as Dixie Ray, a seductive femme fatale who is unquestionably villainous but also surprisingly sympathetic.

The sex scenes in DIXIE RAY keep the story from getting overly complicated, so it’s a nice touch that Vinegar Syndrome also included the R-rated cut of the film, entitled IT’S CALLED MURDER, BABY, on the disc as well.

As opposed to most R-rated cuts of hardcore films, IT’S CALLED MURDER, BABY is significantly different from DIXIE RAY HOLLYWOOD STAR. This is not just the hardcore feature with all the sex cut out: DIXIE RAY runs 101 minutes, while IT’S CALLED MURDER, BABY runs 94. All of the hardcore content has been cut for the R-rated version, of course, but in its place are extended and alternate scenes that further expand the characters and storyline (including a cameo by exploitation film legend George “Buck” Flower!). There’s still plenty of nudity, but the film plays like a mid-budget Hollywood independent and less like a (comparatively) big-budget adult production. 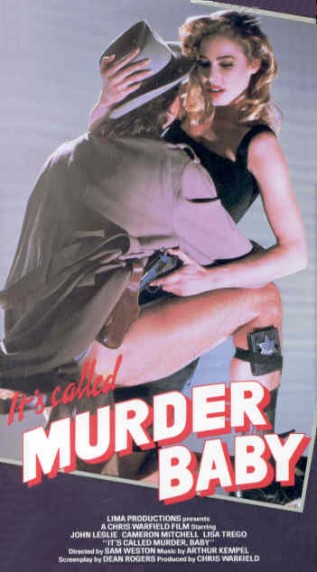 IT’S CALLED MURDER, BABY is a highly entertaining and well-made tribute to the hard-boiled detective movies of golden age Hollywood with the perfect hint of contemporary grit, and the fact that both versions of the film end on a note of such earnest, poignant nostalgia is endearing.