I love genre cinema. I will always have a soft spot for horror, action, sci-fi, and all the subgenres that exist inside those larger categories. What I have never felt any real connection to are those films that exist in the realm of pure sleaze. You know the ones: the films from the ’70s and ’80s, filled with ugly violence and sex that is the opposite of titillating, usually shot on cheap film stock with semi-amateur casts. But knowing these films have a large following and several companies devoted to restoring them makes me wonder what I am missing. With that in mind, I am going to do a deep dive into the world of sleazy exploitation. This is My Exploitation Education. This month’s entry is CUT AND RUN. 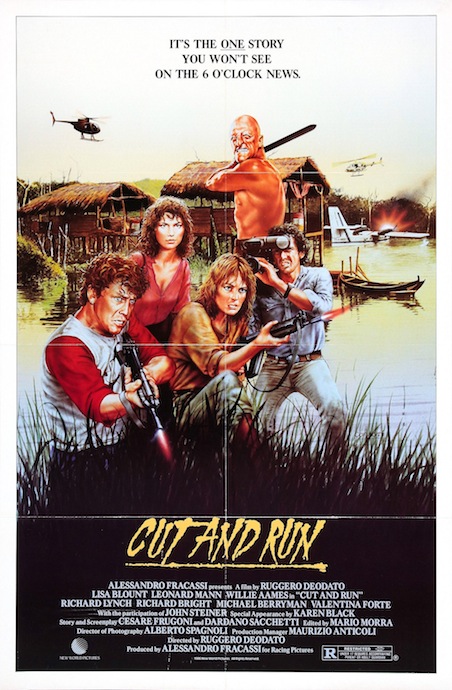 I could watch Michael Berryman burst from beneath a body of water and choke or slice the life out of nameless victims on a loop. This is something I never expected to discover about myself when I started CUT AND RUN, but here we are. I suppose I could just end this piece right there because that statement tells you basically everything you need to know about this nutty flick and my reaction to it. But since we’re here, I guess it can’t hurt to dive a little deeper into the details.

After discovering proof that Colonel Horne (Richard Lynch)–a high level survivor of the Jonestown mass murder/suicide—is still skulking around the jungle, reporter Fran Hudson (Lisa Blount) journeys to Guyana with her trusty cameraman, Mark (Leonard Mann)—who also happens to be a former soldier (handily enough). There, they stumble on to a drug war as a cold-blooded assassin (Berryman) leads a group of local warriors in assaults on cocaine producing facilities. Oh yeah, and Tommy (Willie Aames), the son of Fran’s boss, just happens to be working under the thumb of one of the cocaine bigwigs and is desperate to escape with fellow indentured servant/sex slave Ana (Valentina Forte). 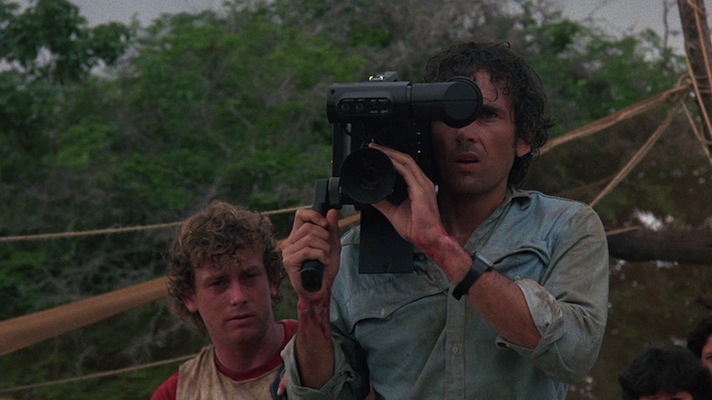 Got all that? Good, because that’s only about half the plot that is crammed into this dizzyingly silly, trashy, and fun action/adventure/horror flick from noted Italian exploitation sleaze merchant Ruggero Deodato. I haven’t even mentioned a very young Eriq La Salle as a pimp named Fargas, Karen Black phoning in a supporting turn as Fran’s producer, or the vast conspiracy that somehow stretches from Horne’s jungle compound in Guyana to Miami drug dens without any apparent source of communication.

Also, at one point, Michael Berryman apparently tires of bursting from beneath rivers and bursts through a wood floor with the same ease. It’s as amazing as it sounds. 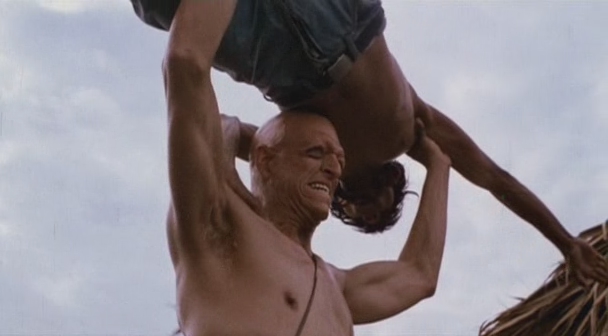 One day, I might tire of the odd tone that comes from Italian exploitation producers trying to make American movies, but today is not that day. Even with some location shooting in Miami (granted, much of it is at the airport, but still…it counts), a mostly American cast of reliable (aside from Aames) character actors, and a plot rooted in a real-life tragedy involving the deaths of hundreds of Americans, Deodato and screenwriters Cesare Frugoni and Dardano Sacchetti still cannot wrap their heads around many of the nuances of American culture.

They offer up the following alien behavior as normal aspects of being American: Fran and Mark stomp right into crime scenes for live reports where they broadcast the gory aftermath to the audience; Aames’ angry young man wears a Mickey Mouse shirt through the whole thing for no discernible reason other than the filmmakers apparently assume this marks him recognizably as an American; Fargas wears all purple, hangs out at a strip club, and drives a Cadillac because all American pimps are frozen in amber from circa-1975 blaxploitation movies.

Being a Deodato flick, there is an aggressively nasty edge to the violence (even in the R-rated version that is missing three minutes of gore from the international cut). Alligators munch on corpses, people are beheaded, a man is torn in half, and a knife carved out of bamboo (Or is it bone?) is shoved through an unlucky victim’s neck. But with the exception of Forte giving Ana a queasily realistic dead-eyed look during a rape scene, everything is kept cartoonish enough that the grotesque moments never register as disgusting (an issue with Deodato’s cannibal films). 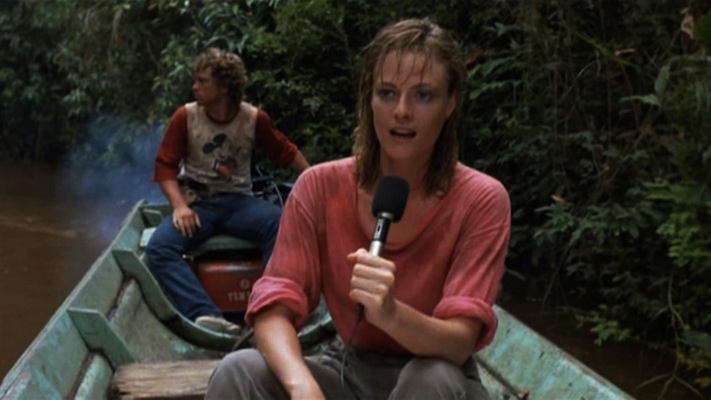 What is interesting about CUT AND RUN is that it feels like Deodato trying to make his own version of APOCALYPSE NOW. Our mostly unlikable protagonists are interlopers in a foreign country, traveling through a jungle and down a river to try and find a crazed former American military officer. Along they way, they encounter madness and pointless violence. In this regard, the original Italian title INFERNO IN DERETTA makes more sense than CUT AND RUN.

While I’m on the comparison of a trashy Italian exploitation flick to a celebrated work by one of the giants of ’70s cinema, I’m not going to claim that CUT AND RUN is a better movie than APOCALYPSE NOW, but I am going to argue it is more effective in places. Taking advantage of location shooting in Venezuela to fill in for Guyana, Deodato shows the physical toll that schlepping through a 100-plus degree jungle takes on his cast. They are all believably drenched in sweat and covered in bug bites. Even better, Lynch—an actor who always seemed like he might be legitimately deranged—makes for a more enigmatic villain with a dangerous edge than Marlon Brando doing a mumbly run-through of nervous tics. 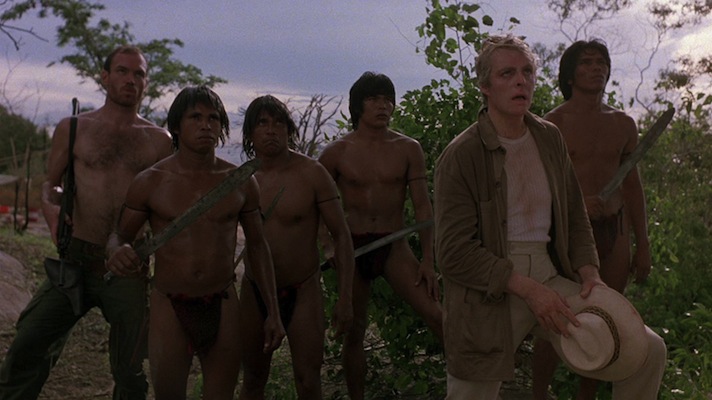