Throughout his career, Stephen King has confronted the most horrific human impulse—the abuse of children—by couching them in the stuff of supernaturally-tinged scary stories. Quite often, he’s explicitly dwelled on the abuse of young women, starting with Carrie White’s harrowing childhood at the hands of her fundamentalist mother. Beverly Marsh’s encounter with It unfolded in the shadow of her father’s abuse, which would recur in her eventual marriage to the tyrannical Tom Rogan. Jessie Burlingame’s hallucinations during her unconventional confinement unlock repressed memories of the sexual abuse she endured as a child. For all his wild imagination, King routinely recognizes the real-world horrors inflicted upon women. Sometimes he cuts right to the grim chase by dropping the typical macabre window-dressing for something like DOLORES CLAIBORNE—a grounded and believable tale whose release conveniently dovetailed with Hollywood’s growing realization that there was more to King than his Grand Guignol efforts.

DOLORES CLAIBORNE is a horror story all the same, though, albeit one that’s intimate and muted by King’s standards. On the page, the title character recounts her life story after she’s suspected of murdering Vera Donovan, her employer for the past 20 years. Screenwriter Tony Gilroy (THE DEVIL’S ADVOCATE, MICHAEL CLAYTON, ROGUE ONE) fashions a puzzle box screenplay out of this unconventional structure, starting with that gruesome inciting incident, here rendered in piecemeal, ambiguous fashion. 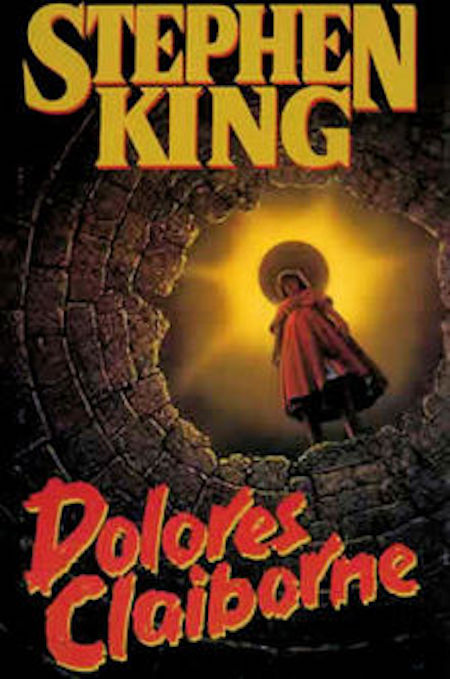 Viewers see Donovan (Judy Parfitt) tumble down the stairs following an apparent altercation with Dolores (Kathy Bates), who proceeds to act suspiciously enough to land herself in police custody as a person of interest. Word of the case quickly reaches New York, where Dolores’s estranged daughter Selena (Jennifer Jason Leigh) is shaken but somehow not surprised to hear the news. Out of some sense of familial duty, though, she returns home to Little Tall Island, Maine for the first time in years to confront her mother, hoping this incident will shed light on her father’s bizarre death during her childhood.

In adapting DOLORES CLAIBORNE, Gilroy and director Taylor Hackford (THE DEVIL’S ADVOCATE, AGAINST ALL ODDS, AN OFFICER AND A GENTLEMAN) resort to the familiar King tactic of intertwining past and present, as this increasingly horrifying and heartbreaking tale weaves between its characters’ memories and their current reckoning with those memories. Hackford cleverly cuts between past and present, emphasizing how these repressed memories loom like a specter over the lives of these two women. 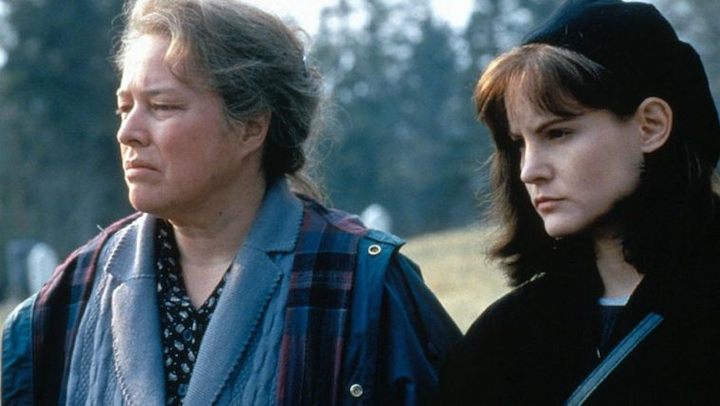 In the King tradition, DOLORES CLAIBORNE‘s boogeyman emerges in the form of Joe St. George (David Strathairn), Dolores’s abusive, drunken lout of a husband whose systematic gaslighting and physical abuse drove her to the desperate lengths that are slowly uncovered during the course of the film. To Selena, however, he was practically a saint, unfairly maligned by her cruel mother.

Stathairn is terrifying in the role precisely because both prove to be true. With Selena, Joe is a doting father, capable of doing no wrong; with Dolores, though, that veneer of the overtaxed working class husband who just wants a cold beer in his hand the minute he’s home slips off to reveal the face of a sinister abuser, repentant only so his wife will stick around to endure further torment.

Stathairn puts the perfectly unsettling lilt of an abusive husband in his voice, particularly when he condescends to Dolores, treating her as if she were a child at times. It’s unfortunately not difficult to imagine Joe as a beloved salt-of-the-earth resident to most of the folks in Little Tall Island, who remain blissfully unaware of the horrors he inflicts upon his own household.

In many ways, Hackford transforms King’s novel into an unconventional ghost story, where the unquieted sprits haunting these women continue to linger. It takes on the appropriate tenor of a New England haunting, as it’s caught in the grip of a bleak, chilly ambiance. It unfolds under perpetually grey skies that are briefly punctuated by the crimson-stained vistas of a pivotal solar eclipse, the same astronomical phenomenon that shades the horrors of GERALD’S GAME (a connection King explicitly draws in his novel, making this event a horrific nexus point in the cycle of abuse both tales dwell upon).

DOLORES CLAIBORNE might not strike audiences as an obvious horror movie, but Hackford subtly deploys genre conventions to capture the gothic heart lurking at the center of a tale involving repressed family secrets that hide unspeakable horrors.

No gothic tale would be complete without the warring contradiction of feminine suffering and empowerment that drives so many of these tales. Since the genre’s inception as we know it (mostly at the hands of women, it should be noted), gothic fiction has imagined women as both victim and heroine, and King tackles this paradox directly in DOLORES CLAIBORNE. Each of its women take on these typical roles, with the title character also becoming something of a femme fatale, here reimagined as misunderstood domestic avenger. Most—including her own daughter—see her as a predatory force preying upon her husband and long-time employer.

Of course, DOLORES CLAIBORNE is expressly dedicated to uncovering the truth beneath this façade: just as Joe isn’t the devoted family man many assume him to be, Dolores isn’t the conniving soul sucker Selena and the local authorities imagine. The film masterfully realizes this with the brilliant casting of Bates, whose indelible turn as Annie Wilkes in MISERY casts such a long shadow that it can’t help but shadow the audience’s perception of Dolores.

If not for the heavy New England accent she adopts this time around, it’d be easy to imagine this as the second coming of Annie Wilkes as Bates spits out that idiosyncratic King dialogue, here accented with a streak of biting sarcasm concealing the wounded soul Dolores hides from the world. 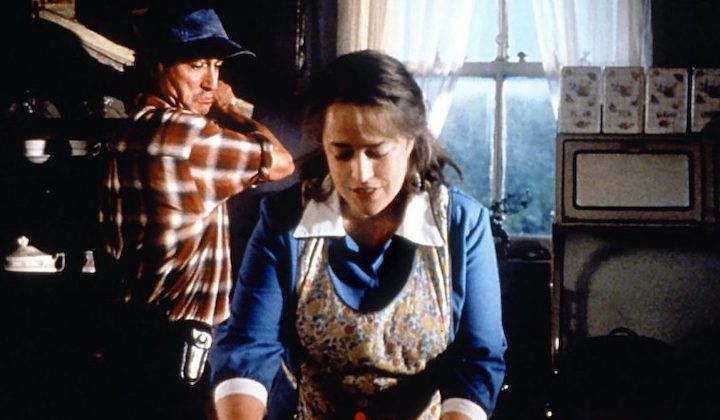 She might be the type of woman who addresses authority figures as “Mr. Grand High Poobah of Upper Buttcrack,” but both the audience and Selena learn that this all justifiably comes from a place of righteous indignation. Bates obviously brings a throaty fire to that indignation; however, it’s the quieter, sobering moments when Dolores must confront and explain her past that she truly shines. The audience’s first glimpse of Dolores is the silhouette of a supposed murderess; the truth, they learn, is much more complicated and heartbreaking.

In this respect, Selena is something of an audience surrogate, embarking on the same trip through her memories and her mother’s startling revelations to arrive at the nasty truth. Leigh’s casting is no less crucial: as an actress, she’s always projected a tough, no-bullshit persona that’s a natural fit for Selena St. George, a woman who’s accustomed to having all the answers as an investigative journalist. Her return home is a reckoning for her poise and assurance, though, when she quickly learns she doesn’t have any of the answers. What’s more, she’s not even sure what the questions are once her mother begins to trek back into their shared sordid history and the abuse they suffered at the hands of Joe.

She subtly wilts in the face of the truth, and her desperate attempt to cling to her recollection of events produces some of the finest work in Leigh’s accomplished career. Resentment is a hell of a thing: hold onto it long enough, and you become a warped shell of the person you’re supposed to be. Let it go, and you find the illusions you’ve held are shattered.

Picking up those pieces is a process, not some magical epiphany that makes the world whole again, and Leigh’s turn captures the complexity of reckoning with trauma. In lesser hands, DOLORES CLAIBORNE may have degenerated into maudlin tripe; this adaption stops short of overwrought sentimentality, landing somewhere between heartwarming reconciliation and the recognition that trauma lingers even after its victims reckon with it.

The third woman here—the deceased Vera Donovan—is the other lynchpin bridging past and present. Like Joe, she looms large from beyond the grave; like Dolores, her reputation is also shadowed by the uncertainty of external judgment. The Vera that viewers initially meet is a biting old crone who seems to sneer at anyone beneath her; the Vera viewers come to know harbors her own tragic, sordid secrets.

Less a domineering employer and more an unexpected confidante to Dolores, she’s also the intersection of the tale’s feminist musings. Not only does she reflect King’s aim to capture female interiority, but she also provides the film’s most potent message. In a tale where nothing is quite as it seems, one constant endures: “sometimes, you have to be a high-riding bitch to survive. Sometimes, being a bitch is all a woman has to hang onto.” 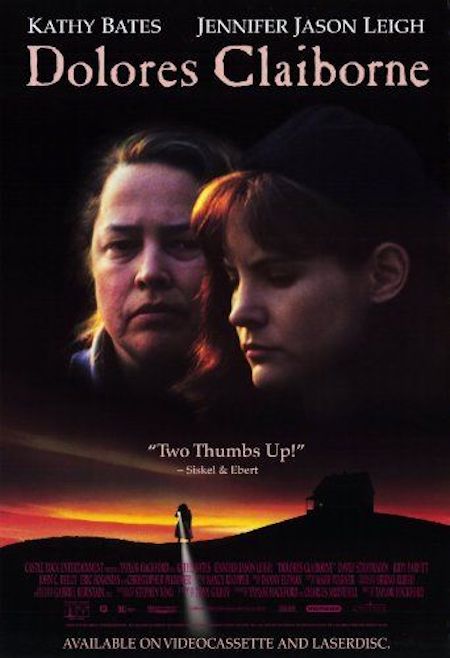