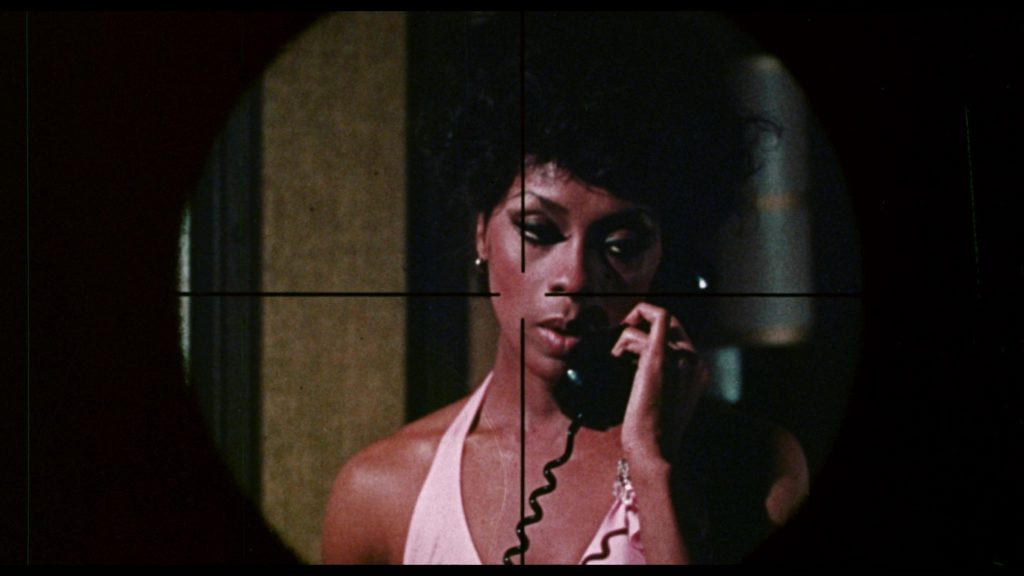 Since I started writing this column late last summer, I’ve developed a real appreciation for producer/director Matt Cimber. His films THE BLACK 6 and THE CANDY TANGERINE MAN have both been solid entries in this series. Outside of the column, I thought his dreamlike, proto-feminist psycho-horror film THE WITCH WHO CAME FROM THE SEA was a fascinating piece of work. So when I saw that he was behind LADY COCOA, I jumped to watch it. After last week’s FROZEN SCREAM, I needed a competently made, entertaining exploitation film. What I got was competently made, but any entertainment value was held off until a third act that felt like it would never arrive.

Jazz singer Lola Falana plays the titular character, a woman doing an unusually long stretch in the Nevada state penitentiary for contempt of court because she refused to testify against her gangster boyfriend Eddie (James A. Watson Jr.). It seems Eddie was the first black man to try and open a casino in Nevada and was subsequently charged with racketeering—among other things. The inherent racism of harshly punishing a black couple for doing business in the same shady style of white mobsters is presented in a blunt manner through an exchange between a prison guard and Ramsey (Alex Dreier), a state police officer working for the Attorney General’s office. 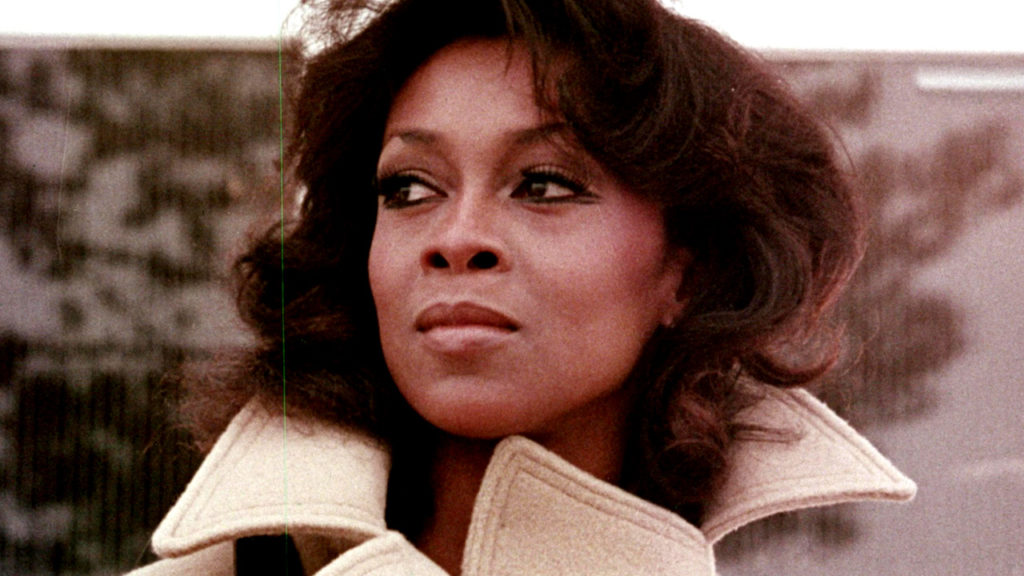 Ramsey is at the penitentiary to escort Cocoa to a Lake Tahoe hotel room since she has finally agreed to testify against Eddie in exchange for her freedom. While Ramsey may be sympathetic toward Cocoa and Eddie, he is not the main cop character she deals with. Ramsey has assigned a green patrolman named Doug (Gene Washington) to pose as her husband and stay with her at the hotel. Where Ramsey is pragmatic about the type of people doing business in his state, Doug is a straight-arrow boy scout, frustrating Cocoa since he is a good looking guy and she has been in prison for a year and half. Despite the math that is obvious to Cocoa, Doug is only interested in doing his job.

On the trail of all three is a pair of menacing thugs (‘Mean’ Joe Greene and Cimber) who never say a word. They take up a room in the hotel and methodically prepare to make a hit on Cocoa. At least, that is the assumption, but it is hard to know what exactly their role is for the first hour of this film as very little of consequence happens. Even worse, the inconsequential filler that does happen is Falana playing Cocoa as the most grating motor-mouth possible. 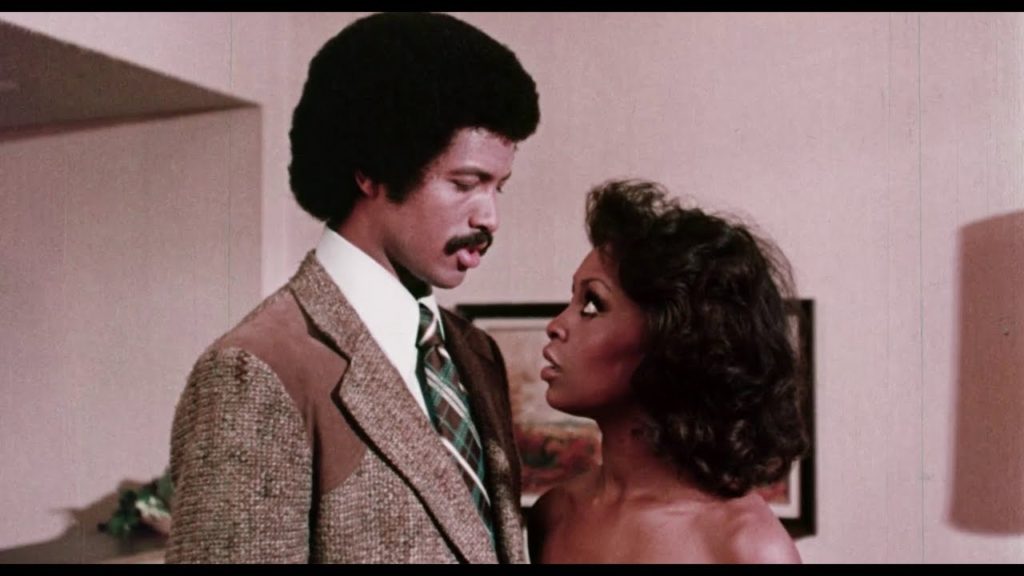 It’s a personal issue for me, but I’ve never been a fan of the jazzy, lounge-lizard sound that was the bread-and-butter of Las Vegas performers in the ’60s and ’70s. You can imagine how I sank in my seat as the movie featured Falana’s jazz version of the children’s rhyme Pop Goes the Weasel (which was also an alternate title of the film) over the opening credits. Even worse, the score by Luchi De Jesus keeps recycling orchestral versions of this jazz arrangement, meaning the musical punctuation of “Pop goes the weasel!” accompanies the end of nearly every scene.

The first hour of LADY COCOA relies on Falana to carry the film. Unfortunately, she approaches her acting like she does her singing: bigger, brassier, lots of attitude. If she had been able to modulate her obvious enthusiasm for performing, she might have been able to pull off turning Cocoa’s penchant for talking in quotes she read in books and pouty, spoiled brat routine into the screwball comedic persona that Cimber and his frequent screenwriter George Theakos clearly had in mind. But Falana rides rough over every one of her scenes, spitting out her lines in a high-pitched staccato rhythm and rolling her eyes like she is on a vaudeville stage playing to the back row. 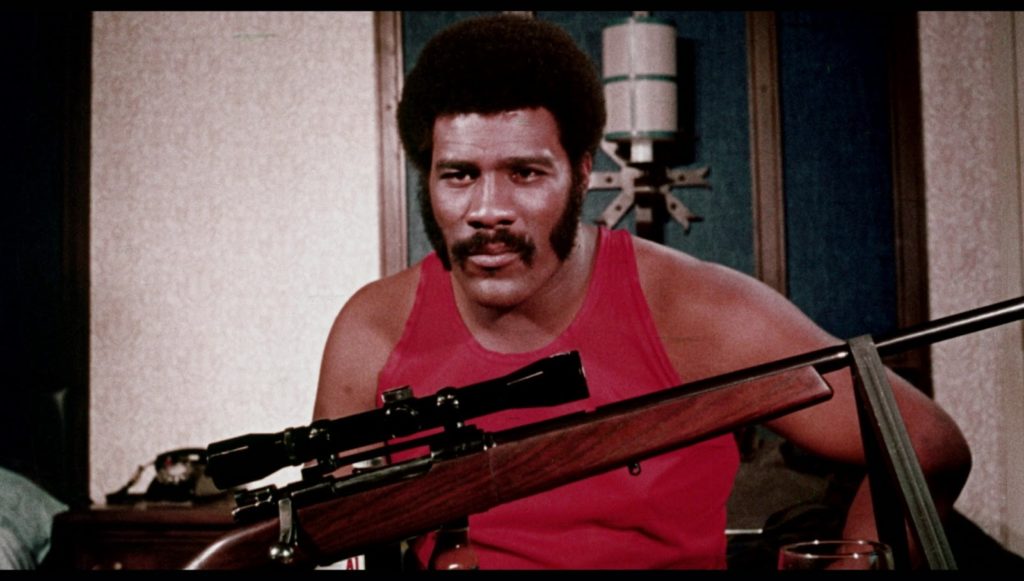 Dreier and Washington do their best to keep the film grounded in something that resembles reality by underplaying everything from their annoyance with Cocoa to their security concerns as they try to keep her safe. Both actors get across a levelheaded weariness that, for these guys, Cocoa is just another job and they want to get her to the courtroom safely so they can continue on to the next job.

When Eddie finally does make his move nearly an hour into the film, LADY COCOA improves immeasurably. There is a nicely constructed car chase that goes fully ridiculous by the time a car is plowing through a hotel casino, the hitmen we have been shown turn out to not be the only dangerous people around, a highly stylized gunfight happens between bathroom stalls, and a character has a post-death revelation that makes zero sense but is hilarious for its sheer incongruity. In other words, the film finally drops the pretense of being a character comedy and embraces its violent, exploitation potential. 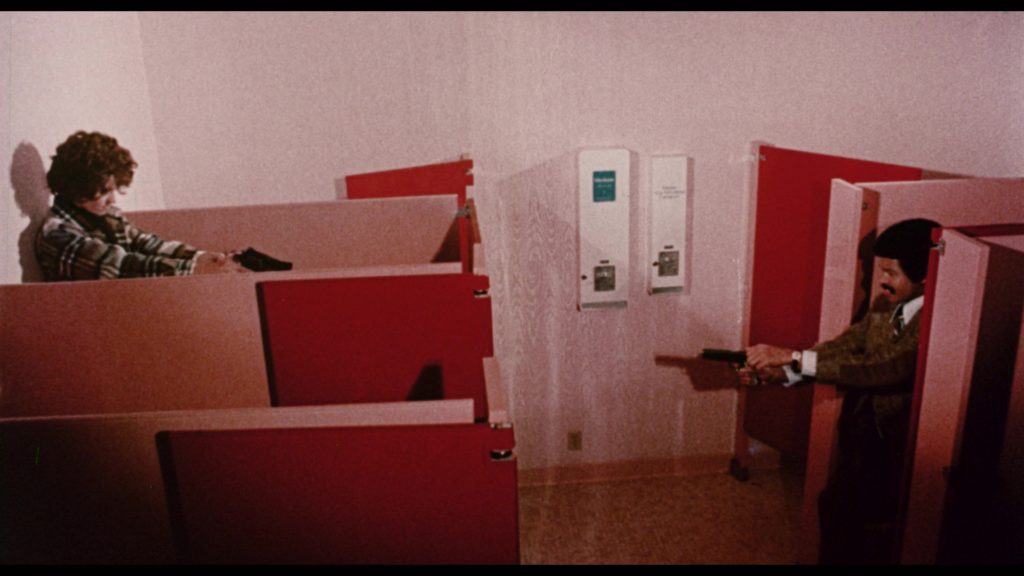 In all honesty, with the exception of THE WITCH WHO CAME FROM THE SEA, LADY COCOA is the most technically well made of Cimber’s films that I’ve seen. But it is less entertaining and does not have as much heart as the roughly put together THE BLACK 6. Even as just a casual fan of Cimber’s work, I was a little let down by the film. Angling to play it as a straight comedy that takes a left turn into action/thriller territory was actually a clever idea (considering that when the film was made, movies basically stayed put in the genre they started in), but the casting of Falana was big miscalculation. The film just does stay afloat long enough for a good final act, but it is not enough for me to recommend it. 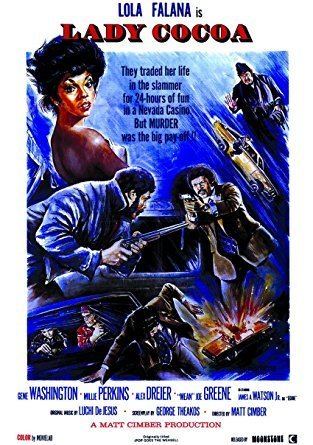