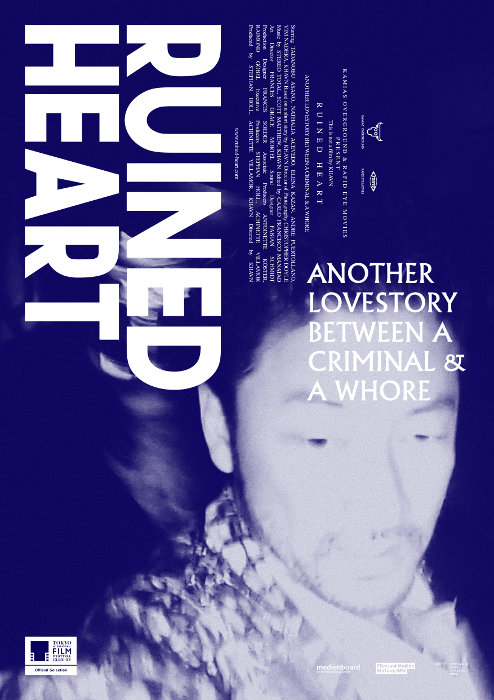 Subtitled ANOTHER LOVE STORY BETWEEN A CRIMINAL AND A WHORE (and having played this past summer’s New York Asian Film Festival), RUINED HEART is a fascinating abstract take on well-worn territory. The only words spoken in the film are song lyrics and poetry recited to music, otherwise the whole story–which is indeed about a pair of star-crossed lovers who both work for a powerful crime lord–is told through image and music. Shot by frequent Wong Kar Wai collaborator Christopher Doyle and starring Tadanobu Asano (maybe best known to DG readers as “Kakihara” in Takashi Miike’s ICHI THE KILLER) and brilliantly scored by Brezel Göring of Stereo Total and a number of collaborators, This sometimes feels more like an album-length music video than a traditional narrative film. That’s not necessarily a complaint, but anyone with a low tolerance for exercises in pure style will probably find it a tough watch. For anyone on its particular wavelength, though, RUINED HEART is a parade of beautiful sounds and images that will linger long after its brief running time is through. 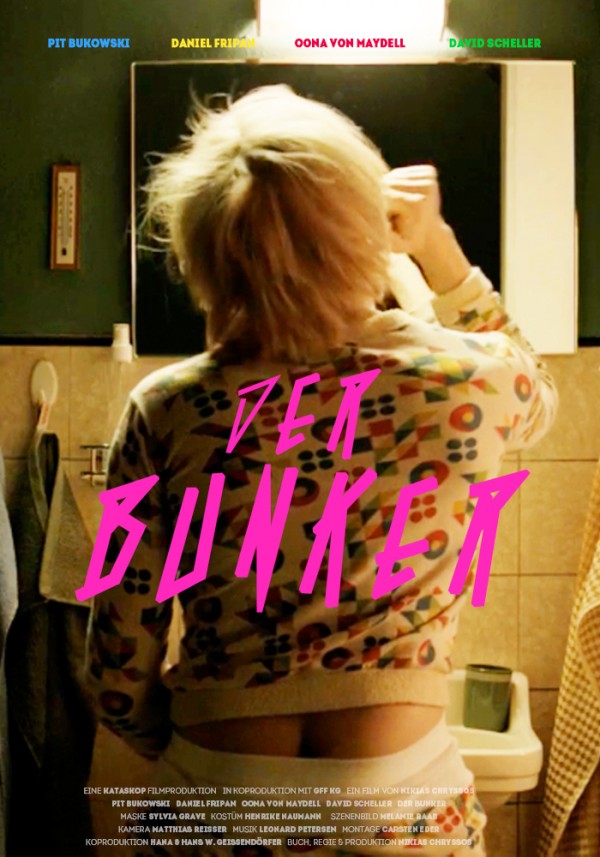 Pit Bukowski returns to the big screen after his amazing turn as the titular character in Till Kleinert’s DER SAMURAI in another deeply strange film. This time he plays a self-serious university student who rents a windowless concrete room in an underground bunker to work on his research, only to find the family from whom he rents the room wants him to home-school their son. Things get progressively weirder throughout DER BUNKER, but debut feature director Nikias Chryssos seems uncertain of the tone he wants to use for these mounting absurdities. There are some very funny moments in the film, but by the surprisingly predictable finale it’s still unclear exactly what the film is trying to say. The best part of the film is Daniel Fripan’s utterly bizarre turn as Klaus, the home-schooled son. He admirably commits to an incredibly weird role and gets all the biggest laughs in the film. 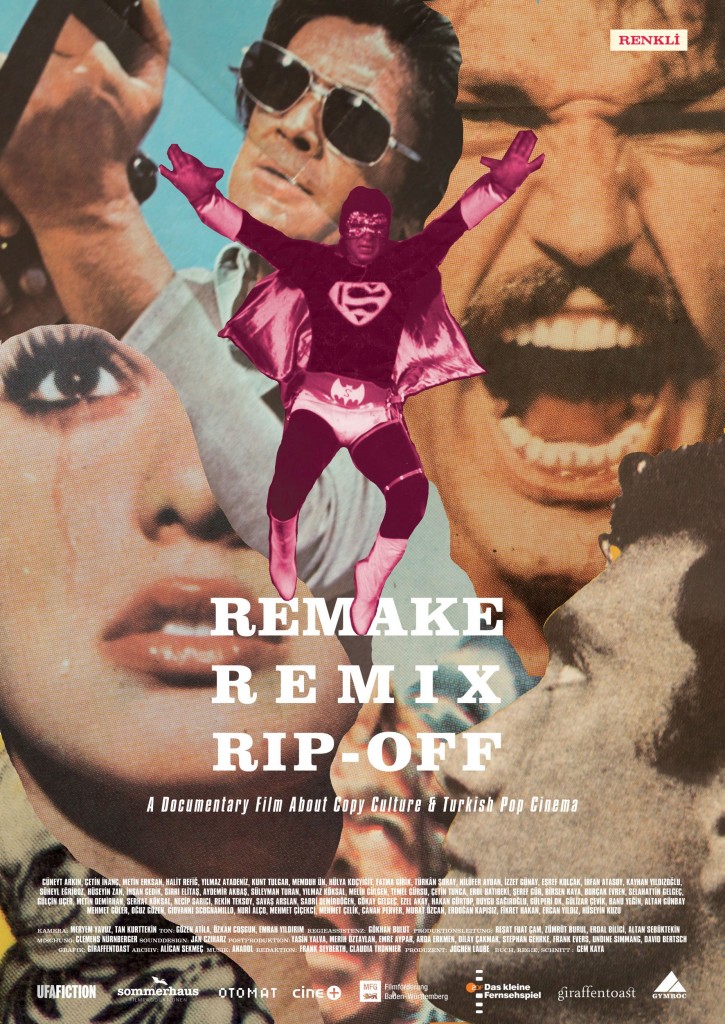 REMAKE REMIX RIP-OFF (Germany/Turkey, dir. Cem Kaya)
If you’ve ever heard of “The Turkish EXORCIST” or “Turkish STAR WARS,” you probably have a vague idea of what sort of movies the Turkish film industry makes. This is a great documentary tracing the roots of Turkish cinema from its beginnings to the circumstances that made such notorious rip-offs of American blockbusters possible (spoiler: it has a lot to do with a lack of copyright laws in Turkey). There is an amazing amount of information here and it’s structured expertly, cutting between interviews with filmmakers and stars of Turkish cinema from the 60s to the 80s and dozens upon dozens of films that nearly all look completely insane. If there’s a major complaint to be made, it’s that REMAKE REMIX RIP-OFF is exhausting in its depth–possibly too much of a good thing, in other words. Regardless, this is a must-see documentary that gives viewers a crash course in a world of cinema they may never have previously known existed. 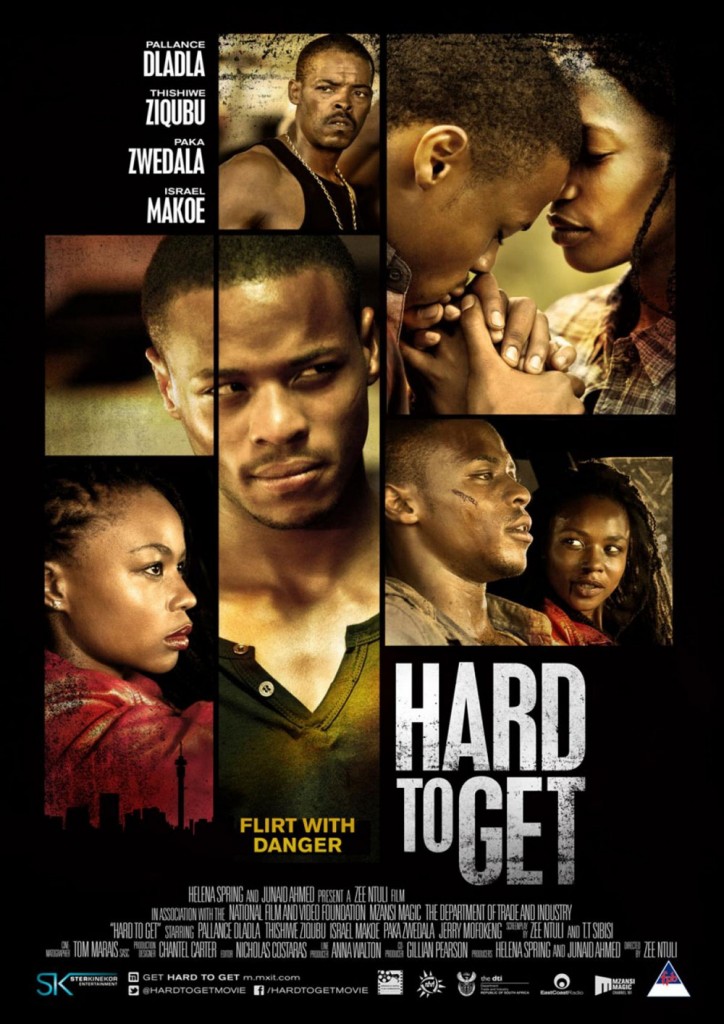 Lothario TK meets his match in tough but beautiful Skiets, a mysterious young woman who wanders into his village looking for a ride to Johannesburg. TK can’t resist the challenge and steals the beloved BMW of Mugza, a smooth but ill-tempered local tough. TK and Skiets get mixed up with crime boss Gumede, and soon they’re in way over their heads with Gumede and with Mugza on their trail. There’s something to be said for unpretentious action, and HARD TO GET delivers exactly that. It’s so effortlessly confident and charming (thanks in no small part to an excellent, charismatic cast) that it’s tough to believe this is director Zee Ntuli’s feature film debut. This is stylish fun that doesn’t skimp on the ridiculous action tropes (excessive slow motion, dubstep) but knows when it’s best to pump the brakes and let the interplay between the characters breathe and carry things forward. It doesn’t rewrite any books, but HARD TO GET is hugely entertaining, and that’s no small feat. 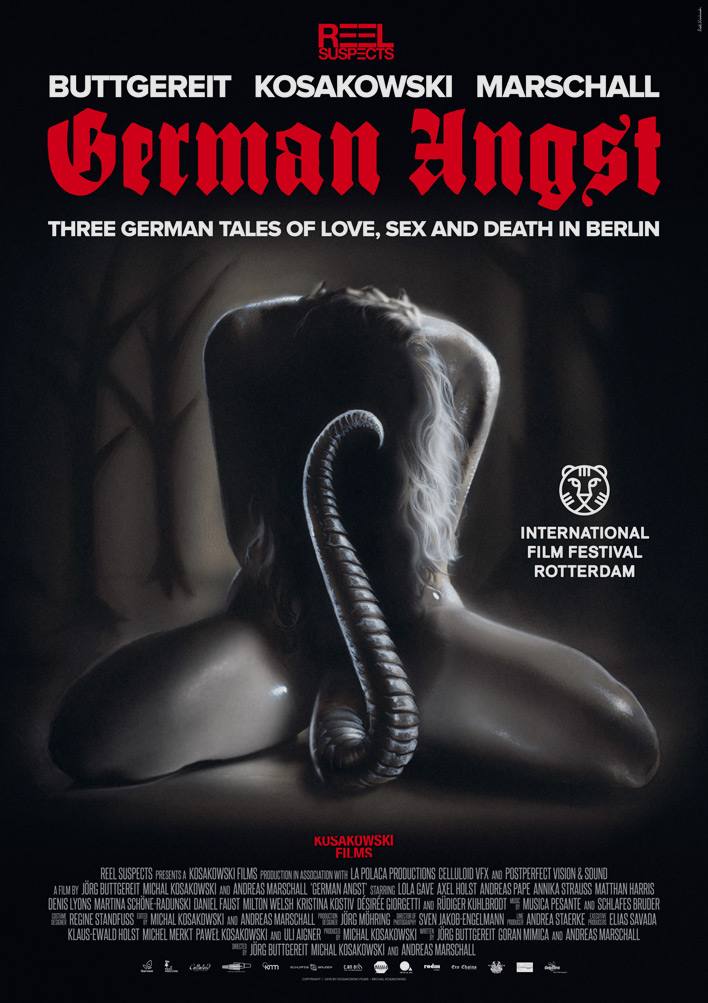 GERMAN ANGST (Germany, dir. Jörg Buttgereit, Michal Kosakowski, and Andreas Marschall)
Horror anthologies are popular right now, and this one has a hell of a hook: three segments by German directors, including the legendary Jörg Buttgereit (NEKROMANTIK). There’s no wraparound storyline here, just three longish shorts: Buttgereit’s “Final Girl” leads off with an abstract story of a young girl planning to leave home with her beloved guinea pig–after she deals with the man she has gagged and bound to a bed. Next up is Michal Kosakowski (ZERO KILLED) with “Make a Wish,” in which a deaf Polish couple is terrorized by a group of racist punks, but a magical trinket turns the tables. Andreas Marschall (MASKS) closes the show with “Alraune,” the story of a man who gets a lot more than he bargained for when he joins a decadent sex club. Marschall’s entry is probably the best, with its incredibly nasty practical monster effects, although all three are well-shot and (as one would expect) fairly unpleasant. Unfortunately, as with many anthologies, this is not really any of the directors working at their best. The segments are good but not great, making GERMAN ANGST a decent if unmemorable horror show. 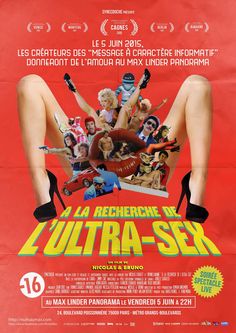 A spaceship on a mission away from Earth receives a distress signal from home: suddenly everyone in the world is compelled to fuck constantly. The ship’s crew discovers that someone has stolen The Ultra-Sex, and if it’s not recovered all of humanity will be obsessed with sex forever. IN SEARCH OF THE ULTRA-SEX is entirely assembled from clips of other films that have been edited and dubbed to create the illusion of a (intermittently) coherent narrative. Many clips are from adult films of the ’70s and ’80s, although there’s a big helping of SAMURAI COP and WAR OF THE ROBOTS in there as well. This is extremely goofy stuff, but in addition to the juvenile humor there are a lot of clips that prove sex movies can be hilarious and deeply weird even without silly voiceovers–maybe the best part of the movie is when the story takes a break and there’s an extended scene of two painfully 80s people posing in different “sexy” positions for the camera. It’s probably no coincidence that this would make a pretty great double feature with REMAKE REMIX RIP-OFF, in which filmmakers discuss some of the techniques of appropriate and recontextualization that were used in the creation of this film. 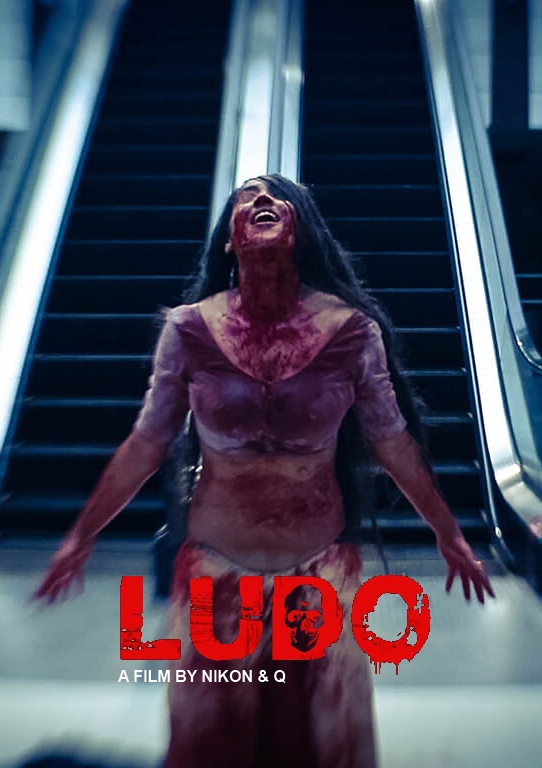 LUDO (India, dir. Q & Nikon)
Genre cinema from India is relatively rare, and it’s always exciting to hear about new genre projects coming from outside the mainstream Indian film industry. Unfortunately, LUDO is a dull, incoherent slog. Four annoying youngsters sneak into a shopping mall before closing so they can have a private place to drink and have sex, but they run into an old couple who seems to live in the mall. The old woman suggests they play a board game (that looks sort of like a crude descendant of “Sorry”), at which point the movie turns into a typical teenage stalk ‘n slash for about ten minutes, and then the last 30+ minutes is an extended flashback of the old woman telling the story of the game. LUDO resembles low-budget American horror cinema more than anything, but its structure robs it of even the slasher movies’ standard charms. There’s a lot of time spent looking at images that are too dark to make out, and the sound design suggests avant-garde while everything else screams CHOPPING MALL without any of the stuff that made that movie fun. LUDO has been playing a lot of genre festivals this year; after seeing it, the only reason I can imagine that would be is the novelty of its being a Bengali-language horror movie. 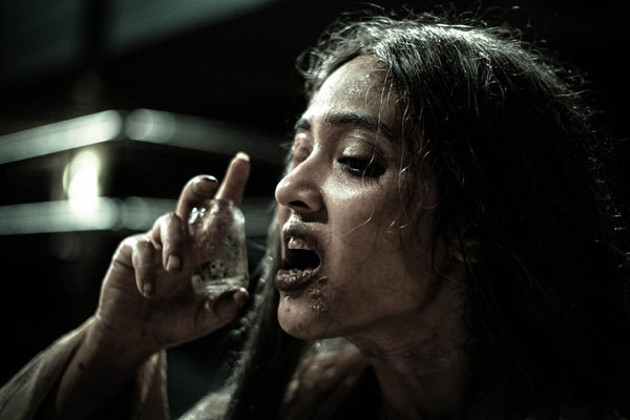 Tomorrow:
DOGLEGS, STAND BY FOR TAPE BACK-UP, LOVEMILLA, RIVER, and THE PASSING! 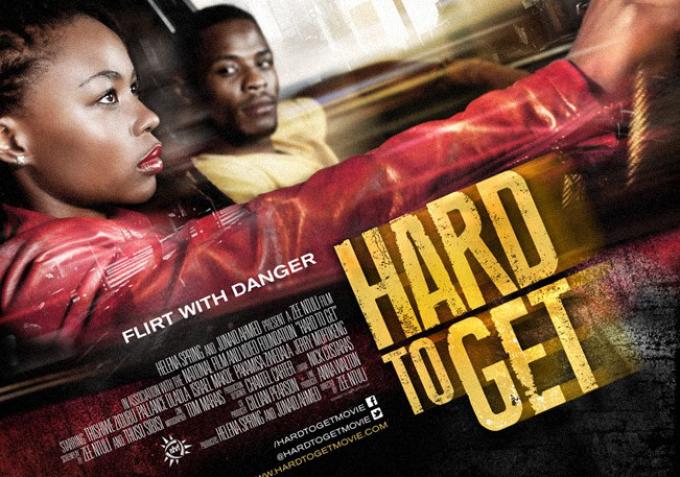