Giallo films, or at least homages to the Italian genre of horror-driven crime flicks that peaked in the ‘70s, have been making a resurgence as of late. Astron-6’s latest effort is the giallo-influenced THE EDITOR, Toby Jones played a composer on a giallo film in BERBERIAN SOUND STUDIO, and Hélène Cattet and Bruno Forzani wowed audiences with the one-two punch of AMER and THE STRANGE COLOR OF YOUR BODY’S TEARS, the latter featuring the most gialloish title in all of giallodom.

Luciano Onetti’s SONNO PROFONDO is a bit more under the radar, but it’s certainly no less interesting a project. Utilizing stylistic aspects of the giallo genre to create an original piece of work not inspired by any specific title, SONNO PROFONDO (or DEEP SLEEP, the English translation) wisely chooses to be its own beast, setting up a scenario that allows the film to bask in visual flair without wallowing in cliché. 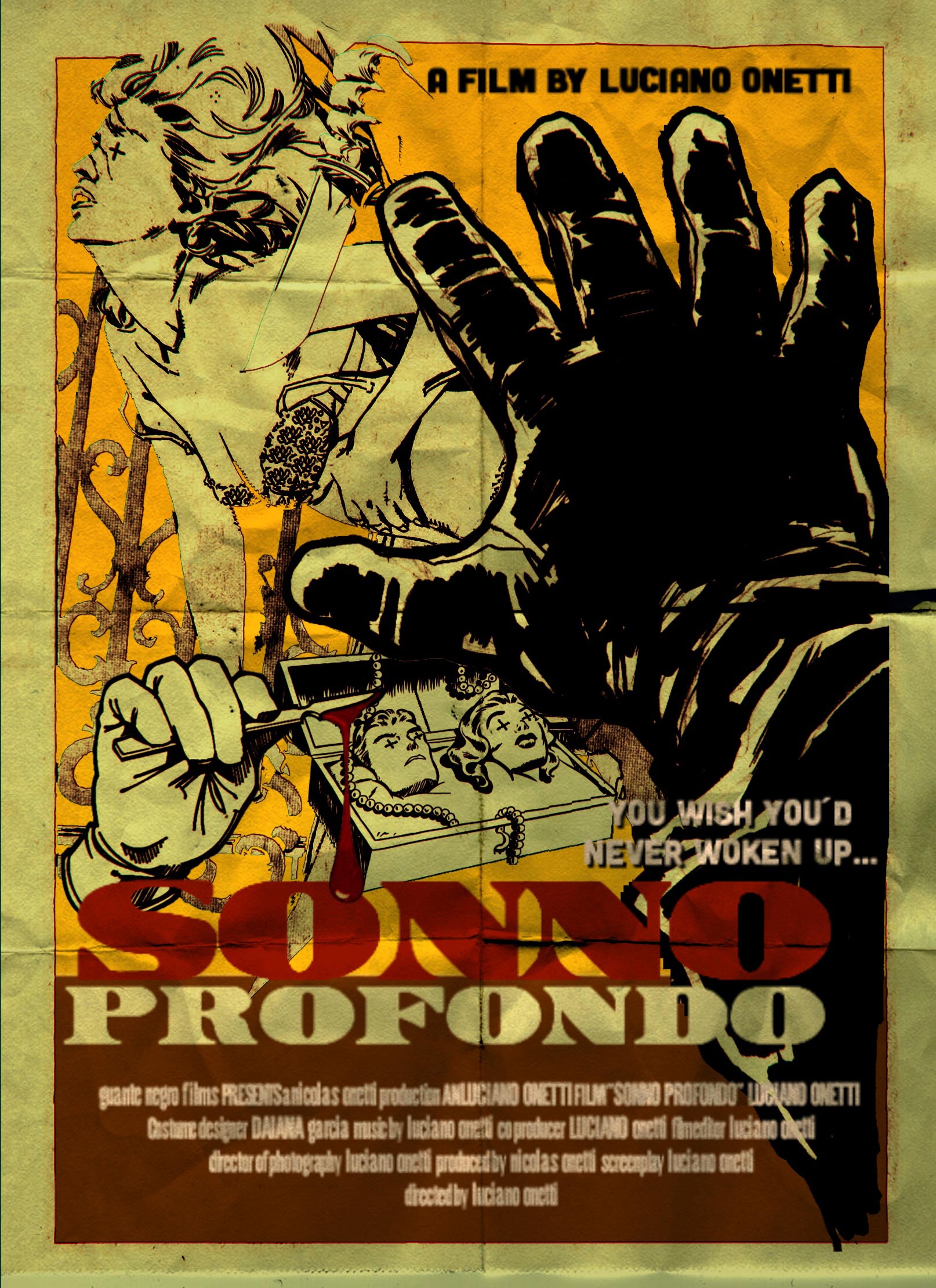 Opening with the murder of a young woman while she masturbates, the film follows the murderer though the action’s aftermath, exclusively from his (or her) point of view, his face, like that of his victim, never appearing fully on screen. Shortly after arriving home, he receives an envelope of photos depicting his crime in detail, including a phone number. When called, the voice on the other end chastises him for his crime, and our lead soon follows the trail of a key left with the photos.

The next hour is a visually impressive game of cat and mouse, with our killer depicted only by his hands, always covered by gloves, whether they be black leather or white rubber models meant for medical exams. Other humans are few and far between and dialogue is practically non-existent, resulting in a tawdry, hypnotic thriller that feels almost like a giallo take on John Parker’s classic DEMENTIA. Onetti inverts the classic plot of tracking down the killer by focusing exclusively on the killer’s experience, an effect that chills but never becomes grotesque.

While SONNO PROFONDO is obviously shot on digital video, Onetti replicates the look of a vintage Italian thriller as best as one could hope, providing plenty of notable references to the genre (children’s dolls, and voices eyeball close-ups, mysterious phone calls) to the point where occasionally comes off as “haunting for the sake of haunting,” though it ties together well in the climax. It could be argued that the film overdoes it at times with the cracks and pops to replicate a decades-old work, especially as while vintage giallos like SUSPIRIA receive glorious new transfers making them look brand new, neo-giallos go the opposite route in order to feign age, but it covers up any video look nicely, and Onetti is careful to keep the film devoid of any obvious anachronisms. You don’t exactly buy the idea that this is a lost, experimental Italian horror film, but for the sake of the premise, you’re certainly willing to suspend disbelief.

But what really brings SONNO PROFONDO out of the realm of “curiosity” is Onetti’s score, a beautifully compiled piece of work that could easily stand on its own, and, in fact, occasionally SONNO PROFONDO seems like less a feature than a long-form music video, like the giallo version of Daft Punk’s INTERSTELLA 5555. Inspired by audio cues ranging from DEEP RED to NIGHTMARE CITY to the more experimental works of Ennio Morricone, SONNO PROFONDO’s score is masterfully made, and even when the film stumbles with an ill-conceived camera movement, needlessly prolonged sequence or unconvincing shot, the music holding the film together is never less than captivating.

SONNO PROFONDO isn’t for all tastes – the lack of dialogue and emphasis on actually having to watch the thing in order to understand what’s going on may be off-putting to those who can’t be bothered to look up from their phones, and those expecting a straightforward thriller may be similarly disinclined – but it’s certainly a worthy effort, one that creates something original out of a well-worn style. Genre fans looking for a good return of the mysterious black-gloved killer should definitely give SONNO PROFONDO a stab. The DVD includes a brief deleted scene, a five-minute “behind the scenes” segment with Onetti talking about the mercenary film production, and two trailers for the film, both of which feature ridiculous Italian-accented narration that makes the film feel much less convincing than it is.