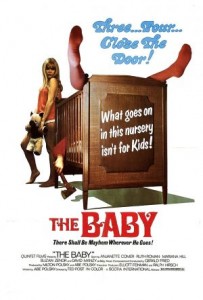 Written by Abe Polsky and directed by Ted Post (MAGNUM FORCE (1973), BENEATH THE PLANET OF THE APES (1970)), THE BABY is one of the most bizarre horror/exploitation films I’ve ever seen.  It stars Anjanette Comer (GUNS FOR SAN SEBASTIAN (1968)) as social worker Ann Gentry investigating the Wadsworth family.  Mrs. Wadsworth, played by Ruth Roman (STRANGERS ON A TRAIN (1951), THE FAR COUNTRY (1954)), and her daughters Germaine (Marianna Hill) and Alba (Suzanne Zenor) are taking care of Baby (David Mooney), a full-grown man who, mentally, is still a baby. Gentry takes quite an interest in Baby, much to the annoyance of the Wadsworth women. Gentry herself is married but her husband has suffered a mysterious accident and is never seen.  When Gentry’s attempts to get help for Baby are stopped at every turn by Mrs. Wadsworth, she threatens to have Baby taken away. The Wadsworth’s are throwing a birthday party for Baby and invite Gentry as a gesture of good-will and under the pretense of discussing Baby.  Things don’t exactly go according to plan and it turns out Gentry has ulterior motives.

THE BABY is a fun and entertaining film as well as being dark and quite disturbing.  We’re never given any indication as to why Baby is the way he is.  One character posits that Mrs. Wadsworth did it to him intentionally, as a sort of punishment against the lone male in the family for being left by the three different fathers of her kids.  Mrs. Wadsworth has bad luck with men. That’s all there is, just speculation. Ruth Roman was a cold Mrs. Wadsworth, making you wonder how much of the speculation is true. To me, she was a cross between Tura Satana and Joan Crawford…very cool and calculating and used to getting her way. I admit I also have a bit of a girl-crush on Marianna Hill (MESSIAH OF EVIL (1973)).  She is gorgeous and had the best back-combed hair.

There are a few disturbing scenes in THE BABY, one in particular involving a babysitter and what the three women do to her when they return home; and another one that shows Germaine going into Baby’s room in the middle of the night. The suggestion alone was enough to make me squirm.  The party was also rather weird—all adults and no one seemed to be watching Baby as he wandered around the house.  All of the women give brilliantly chilling performances.  Each one has her own agenda, even the very helpful and concerned social worker, Ann Gentry. The pacing of the film is very good, and director Ted Post does an amazing job keeping the viewer in the dark until the very startling end.  It was definitely a nice twist, and one I really didn’t see coming.  If you’re a fan of 1970s exploitation horror and haven’t seen this gem yet, you must remedy that. THE BABY is available on disc through Severin Films.

The Gory Ginger checks out THE CAMPSITE here!