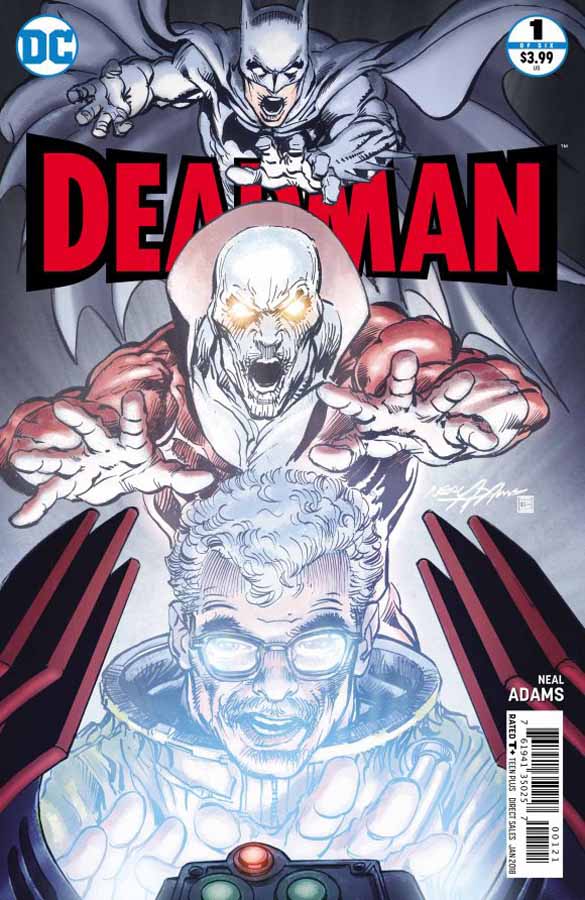 “But he SUCCEEDED, you fools! I’m DEAD! THAT’S why he must be punished! BECAUSE HE SUCCEEDED!”

“GORDON? How did you survive the fall? ” “Good nutrition. Regular bowel movements. What do you use?”

Oh, yeah — dialogue that cringe-worthy can only mean one thing: Neal Adams is back! 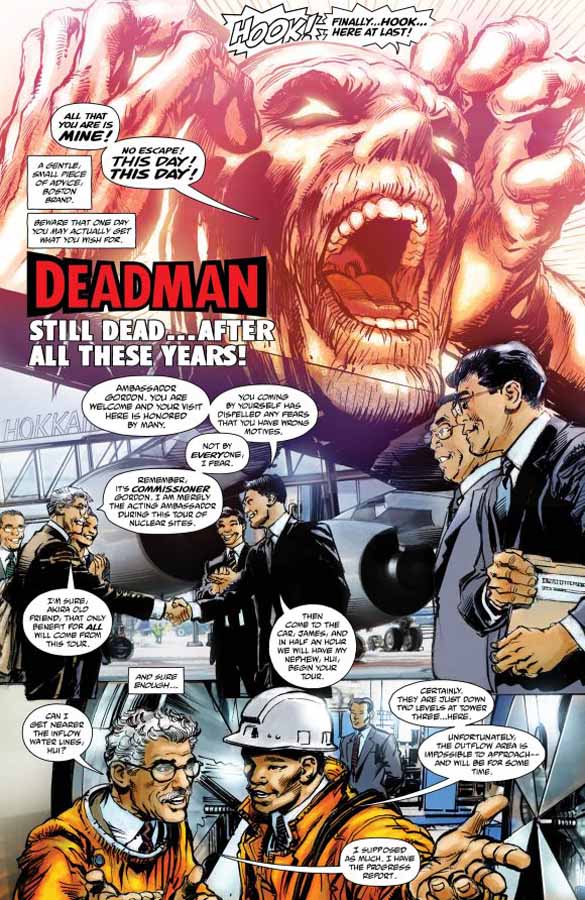 Not content that his brand of narrative insanity has been well-represented enough in recent years with the flat-out indescribable Batman Odyssey and Superman: The Coming Of The Supermen, the one-time master is back, and back on one of his signature characters no less, in the new six-part Deadman mini-series from DC. You know what that means, right? Buckle in, because this shit is gonna get nuts.

Heck, truth be told it’s nuts from the outset and never lets up — Commissioner Gordon as temporary ambassador to Japan? Attempted sabotage of a nuclear reactor for the sheer hell of it? Deadman watching over the whole scene for reasons that are never really specified? The sensei from Batman Odyssey back on the scene seemingly out of nowhere? The motivation of Boston Brand’s assassin, Hook, finally revealed after all these years — and it’s bullshit? Boston’s got a twin brother named Cleveland? Jim Gordon was Bruce Wayne in disguise all along? DOES ANY OF THIS MAKE SENSE? 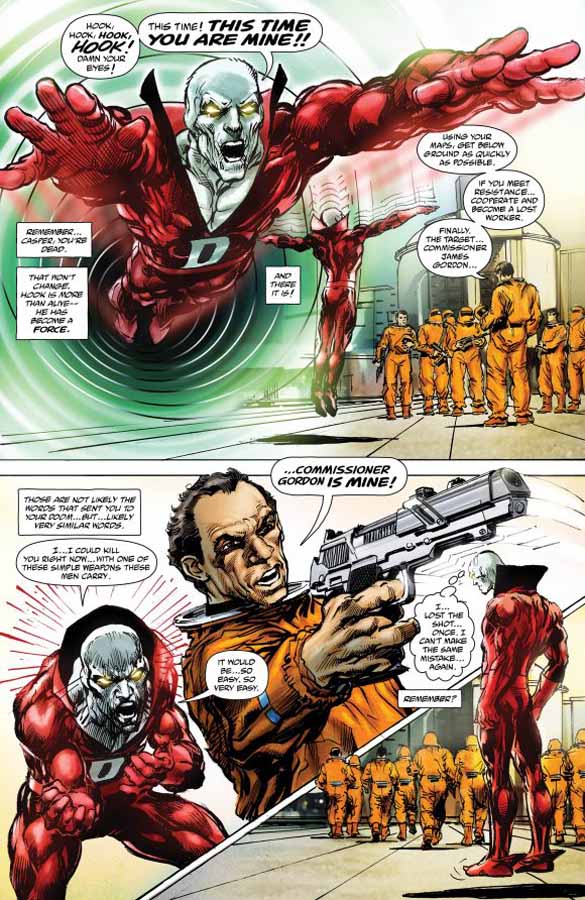 As bizarre as it sounds at first, Adams can also be compared to those legendary/notorious filmmakers in that his imagination far outstrips his actual ability. I know that borders on blasphemy because Neal just plain revolutionized everything we thought we knew about visual storytelling in the 1970s, but seriously — that was four decades ago. Now just about every Adams character has a bad case of “horse-face,” his once-visionary page layouts are confused and disjointed, his vaunted action sequences have crossed the line into the unintentionally hilarious due to their propensity for sheer and overwrought melodrama. Seriously, every person in every panel looks like they’re on the verge of a complete mental breakdown — even when nothing is happening. It’s a whirlwind of complete and utter insanity the likes of which you simply can’t find anywhere else. 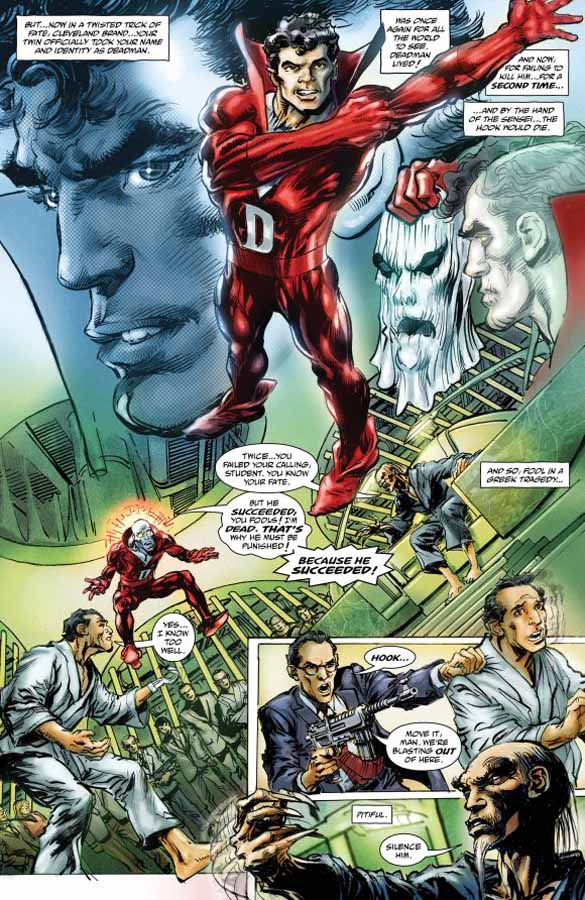 Largely, of course, because no one else wants to make comics like this. But Neal’s not burdened with the baggage that other “Big Two” (or even independent) creators are — his place in comics history secure, he’s free to do whatever he wants. His editors plainly just receive his pages, throw their hands up in despair, and say “what the fuck — just publish it as is.” And who can blame them? If you wanted to whip a book like this into shape, it would be impossible to even know where to begin. Life’s just too short to subject yourself to a series of headaches that profound. I’d leave it alone if I were in their shoes, too, and so would you.

Undoubtedly long-time fans of the character must wonder what Deadman could possibly have done to deserve the one-two punch of ignominy he’s been served up in 2017 between this and the year’s earlier Deadman: Dark Mansion Of Forbidden Love three-parter (which, in fairness, was at least gorgeously illustrated), but come on — if you were expecting anything “better” from Adams than what’s on offer here, you’ve clearly been living under a rock for the past twenty-plus years. The Neal Adams who gave us all those dark and rainy Gotham City streets and took our breath away with his dynamic realism gave way to the Neal Adams who opened up an issue of Ms. Mystic (remember that one?) with a picture of a deer vomiting in a forest a long time ago.

And while it would be a reach to append that last sentence with an ” — and I wouldn’t have it any other way,” I’d also be lying if I said that I didn’t think Deadman #1 was worth a buy (although I certainly wouldn’t recommend shelling out an extra buck for the glow-in-the-dark variant cover). This comic’s sheer incompetence across the board guarantees that you literally have no idea what’s going to happen on the next page — and that you usually don’t know what happened on it after you’ve read it, either.  That doesn’t make it a “good” reading experience by any stretch of the imagination — but it does make it an absolutely singular one. And while I’m clearly rationalizing the irrational here, I could honestly care less:  the first issue of Deadman was one big, fat, ugly trainwreck — and I can’t wait to read the next five.