I loved making mixtapes. The excitement I felt when creating a unique playlist for another person’s optimum aural pleasure was palpable. The chance to channel my personality in the form of a playlist of favorite songs was an opportunity I relished, hoping the first song made a strong impression (always start with a loud, kick-out the-jams song (i.e. The Smugglers’ “Coffee, Tea or Me?”) and end with a quirky short song, often a hidden track (remember those on CDs?). I made mixtapes for friends and women I fancied, hoping the playlist would appease the former and convince the latter that I was worthy enough as a prospective suitor. To me, making a mixtape for a girlfriend was an ideal expression of love, a physical symbol for words I couldn’t articulate (which would explain my multitude of short-lived relationships). 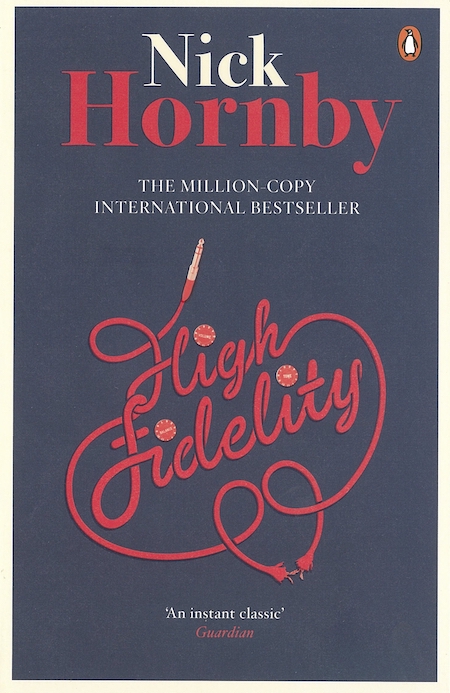 When I encountered Nick Hornby’s debut novel, High Fidelity, in my mid-twenties, I was impressed, inspired, and a bit embarrassed: identifying a character who mirrored my own immaturity in romantic relationships. In Rob Gordon, I found a kindred spirit, a guy I would’ve loved to hang out at the pub, debating New York punk vs. British punk over pints of Tennent’s lager. Rob was very particular in his love of music, but he was also very sad and moody, and it wasn’t just because he got dumped by his latest girlfriend—he was in a state of arrested development, a poster boy for Generation X men-children. I loved Rob, but I saw things I didn’t want to see about myself: how lazy I was in maintaining healthy romantic relationships. The book was a wakeup call I needed (not that I figured out everything about relationships after reading the book—I would continue to make foolish life decisions into my next two decades). 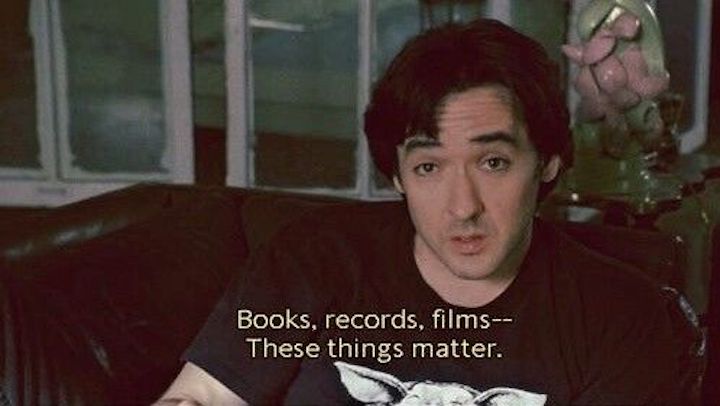 When I first read the news that acclaimed filmmaker Stephen Frears (THE GRIFTERS, DIRTY PRETTY THINGS) was directing an adaptation of Nick Hornby’s novel, I was excited. A British director who had made tasked with adapting a beloved contemporary British novel was a smart choice and I was confident the film version could be very enjoyable. And then I read the film would star John Cusack and the setting would change from London, UK to Chicago, USA.

Excitement changed quickly to anger—I was already irritated when international films received English-language Hollywood remakes, so a relocation from the novel’s original setting irked me greatly. John Cusack was a great bit of casting, but again, he was AMERICAN. Rob Gordon was an insecure British man in his mid-thirties, but now he was ultra-cool Cusack, the amiable boombox-wielding Lloyd Dobbler in SAY ANYTHING…. I was still going to see the film, but I was prepared to loathe it. 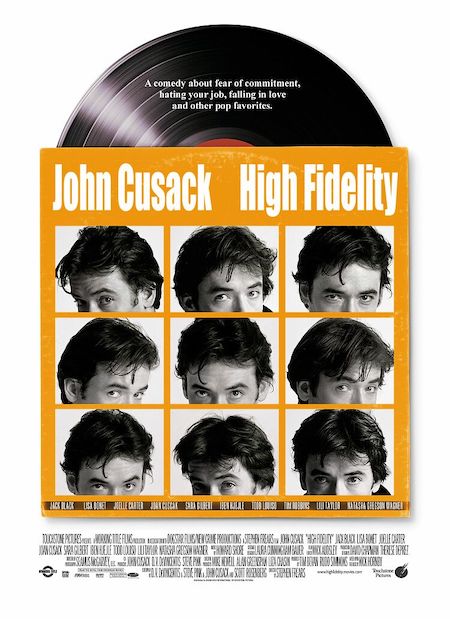 I saw HIGH FIDELITY during its first weekend of release, 20 years ago today in 2000, and any apprehension I felt at the novel’s Americanization dissipated immediately. Frears took the spirit of Hornby’s novel and translated it successfully on this side of the pond. In retrospect, I should have had more confidence in Cusack and his friends, screenwriters Steve Pink and D. V. DeVincentis, who, along with director George Armitage, had made GROSSE POINT BLANK, a deft marriage of hitmen-oriented action pieces, humor, a cracking good new wave/ska soundtrack, and the complexities of a high school reunion.

What came first, the music or the misery? People worry about kids playing with guns, or watching violent videos, that some sort of culture of violence will take them over. Nobody worries about kids listening to thousands, literally thousands of songs about heartbreak, rejection, pain, misery and loss. Did I listen to pop music because I was miserable? Or was I miserable because I listened to pop music?

It’s a wry observation on the power of music and its presence in people’s lives. We all have music that helps define periods in our lives—I can’t imagine my early years as a brash English major without Pavement and Sebadoh starting an impromptu gig in my head. (Yeah, okay, Jay, you’re name-dropping cool ’90s indie rock bands, but really, behind that braggadocio, you know you were an insecure young man hiding behind the music.)

This version of HIGH FIDELITY‘s Rob is a music snob who owns a sleepy record store, Championship Vinyl, but he uses his recent breakup with Laura (Iben Hjejle) to shield his pain by examining the “Top Five Breakups” in his life. Behind each flashback, there’s a woman (or girl, in the earliest flashback) who have ended their relationship with Rob for one reason or another.

Still bitter from these experiences, Rob tracks down each woman and ingratiates himself into their lives to discover the answer to why they broke up with him. It’s an act of desperation for a man who can’t let the past go and concentrate on the present, but nevertheless he barges into his exes’ lives, causing a range of reactions, mostly negative (Catherine Zeta-Jones, as his art-school ex, is particularly memorable, and not as eccentric as the art-school lasses I used to hang with back in the day). Instead of focusing on what went wrong in his own relationship with Laura, Rob retreats, fearful of confronting his own character flaws and his own culpability in the relationship’s demise. 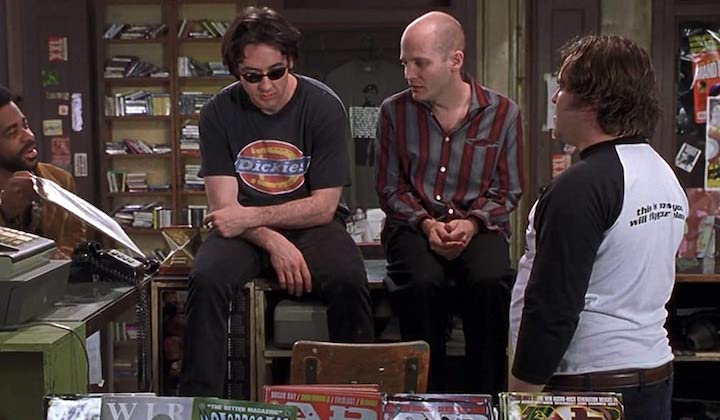 As music is important to Rob and his employees/cohorts, Barry and Dick (Jack Black and Todd Louiso), so too are their constant “Top Five” lists—a bit of shorthand for them to describe how they deal with life and the people they encounter. It’s amusing at first, before quickly demonstrating that these geeks know a lot about music, but very little in how to interact with people. “Rob, top five musical crimes perpetuated by Stevie Wonder in the ’80s and ’90s. Go. Sub-question: is it in fact unfair to criticize a formerly great artist for his latter-day sins, is it better to burn out or fade away?” Barry asks, triggered after a customer asks for Stevie Wonder’s “I Just Called to Say I Love You,” offending Barry’s music sensibilities. 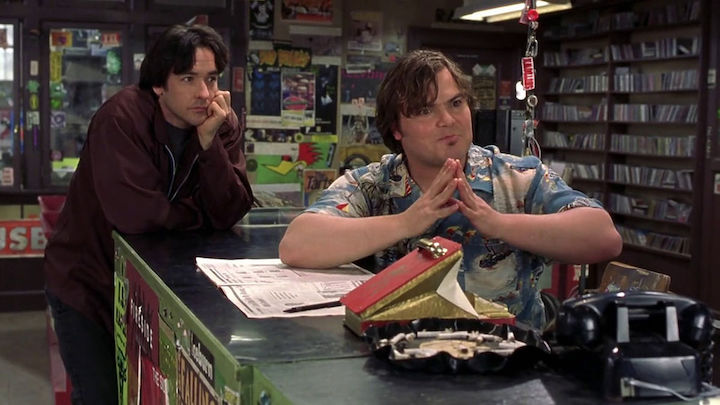 Barry is the loudmouthed braggart, Dick is the quiet contrarian, and Rob is forced to be the peacemaker between the two. The Top Five lists become a source of pride between the three, a game of one-upmanship to build oneself up while tearing the others down. We’ve all seen a Barry in our lives, the type who isn’t shy to express his opinions, demonstrating a polished arrogance that shields insecurity, in order to make him feel better about himself compared to others. It’s sad, but a byproduct of a world obsessed with pop culture ephemera that HIGH FIDELITY captures well.

The cast of HIGH FIDELITY is impressive: John Cusack’s Rob elicits sympathy even though the viewer knows he’s often being childish or reprehensible (which he acknowledges, when he reveals he had an affair when Laura was pregnant). It’s a delicate balance that would topple with a different actor in the role, but Cusack’s ability to look vulnerable even when he’s listing off the terrible things he’s done during his relationship is impressive.

It doesn’t absolve Rob of wrongdoing, but it defines his mindset when he examines the highs and lows of the relationship. Having characters break the fourth wall is a risky enterprise, but Frears and Cusack pull it off nicely. HIGH FIDELITY gives front-row seats to his inner thoughts, and through which there are relatable moments—such as Rob picturing Laura having the “greatest sex in the world” with Fucking Ian (a very funny Tim Robbins) while he’s alone in bed—that are funny, cringeworthy, or a mixture of both. 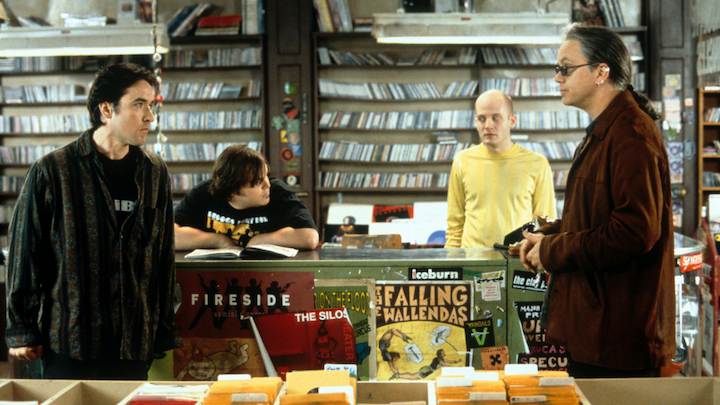 Jack Black and Todd Louiso are an amusing, bickering duo and it’s nice to see them both grow up somewhat by the end of the film (and Dick gets a girlfriend!), even if Rob still thinks it’s embarrassing for a man in his thirties to front a band called Sonic Death Monkey. Some critics have faulted Danish actress Iben Hjejle for being wooden as Laura, but I think she’s impressive as a woman weary from living with a man-child and his energy-sapping ways. She wants to see Rob grow up and succeed in doing something more than just getting by with a dingy record store (little does she know that in a decade, vinyl would make a resurgence—making Championship Vinyl a must-visit site for platters).

Laura takes back Rob not because he’s a changed man, but that she needs someone comfortable to help her ease the pain of her father’s recent passing. It’s not purely out of resignation, but a desire to feel something other than misery and grief, which Rob is only too happy to oblige. Hjejle’s stripped-down performance is very realistic and sells her own need for reconciliation; it feels like it’s been ripped out of the true-life pages of many a long-term relationship that’s experienced a breakup or two.

But what about the music, man? It’s about a record store owner! Frears’ use of music in HIGH FIDELITY is vital in depicting a bunch of music snobs and the soundtrack doesn’t disappoint. Just as Rob re-organizes his immense record collection autographically (“No fucking way,” Dick replies incredulously, both shocked and impressed), the soundtrack is an important component in setting tone and setting: from the initial howl of The 13th Floor Elevators’ “You’re Gonna Miss Me” when Laura leaves Rob, to The Velvet Underground’s melancholy “Oh! Sweet Nuthin’.”

The soundtrack isn’t just a random sampling of popular contemporary music inserted for marketing synergy purposes, it’s Rob’s autobiographical playlist. Even hearing Marie DeSalle (Lisa Bonet) perform a soulful cover of Peter Frampton’s inexplicably-popular “Baby, I Love Your Way” makes a depressed Rob take notice. Songs are indeed about misery or love and when one is depressed, it’s the songs about love that hurt the most. 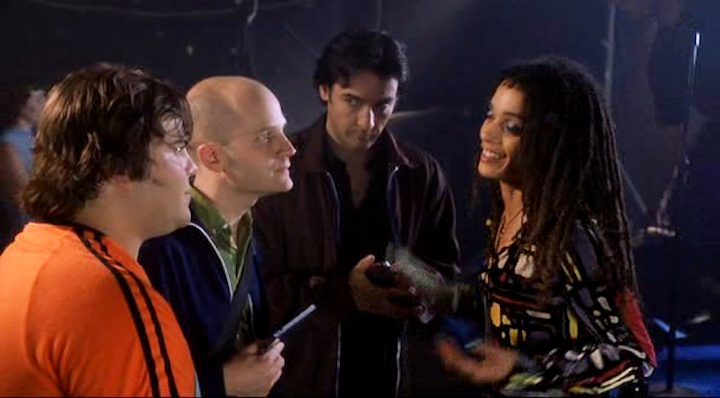 At HIGH FIDELITY‘s conclusion, when Rob and Laura reconcile, Stevie Wonder appears again, but this time it isn’t a much-maligned ’80s song, but a beautiful ode to love, “I Believe (When I Fall in Love It Will Be Forever),” a song he wrote at 22 (perhaps it’s a testament to youth that the best love songs are written by artists still full of hope and optimism, not singed by the flames of heartache)! 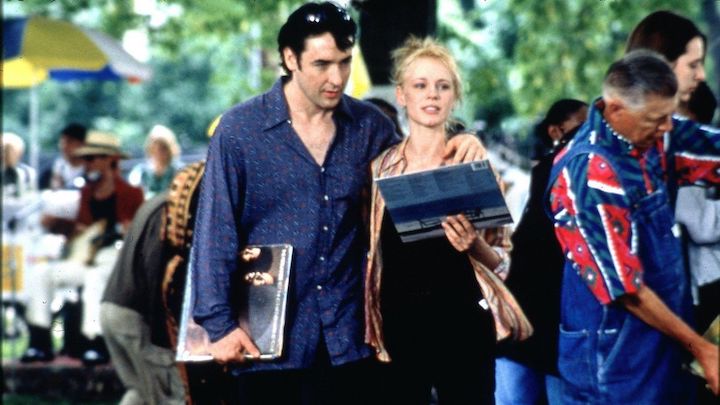 The soundtrack transcends genres, providing more than just a guide to Rob’s misbegotten romances, demonstrating the comfort of music during each emotional moment in a person’s life. Whether you’re a casual listener or a devotee who can recite any lyric by memory, music is to be cherished, an ancient poetic condition that will continue for as long as we’re inhabiting this ball of mud.

HIGH FIDELITY is a charming and bittersweet examination of relationships and, 20 years later, it still holds up as a testimonial to relationships via song. While the movie gives us a happy ending, it still offers a caveat: how long will Rob and Laura last? Has Rob finally learned to stop living in the past and move forward? I stopped making mixtapes to impress women a long time ago (burning a CD playlist isn’t the same, sigh), but I haven’t forgotten the adrenaline rush. Nowadays, I feel a little bit like a slightly older Rob: a bit wiser, but still prone to stumbling; conjuring playlists in my head (and on Spotify) to play at a moment’s notice, a sonic tonic for what ails me. 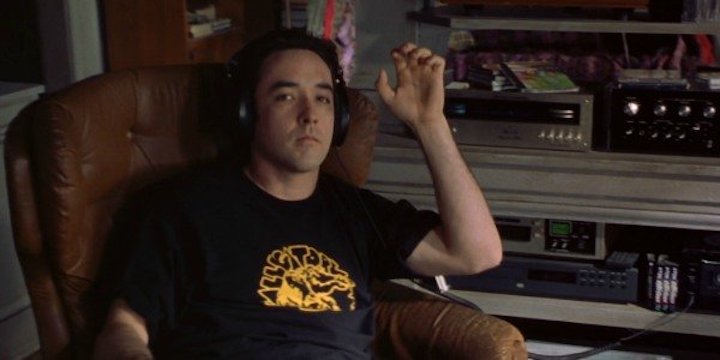