Home  ⁄  The Wire  ⁄  [Now On Shudder] ‘Cursed Films’: An Even-Handed Attempt To Make Sense Of Tragedy

Even though it is dabbling in the occult and supernatural, Cursed Films, comes from a very natural and normal starting point. Humans want things to make sense. It sounds like an obvious statement, but it’s a very specific drive that makes a huge impact on how people perceive and act in the world. Probably the most benign example is that of the montage in film: Eisenstein showed that if a film is edited with images/scenes next to each other, audiences will naturally preclude that they are related (somehow) and add it to their own accounting of the narrative (while possibly amping up their emotional response depending on the visuals).

Cognitive and psychological studies would bear this artistic intuition out when multiple, seemingly connected pictures are placed in front of people and they concoct their own story of what they are seeing. Pattern recognition is a necessary evolutionary trait (to avoid poisonous foods, figure out how to hunt well, and more) that has been passed down genetically to present day—though sometimes that extends beyond probability. Shudder’s new docuseries, Cursed Films from Jay Cheel, is a slice of how this innate desire and ability interplays with larger events. 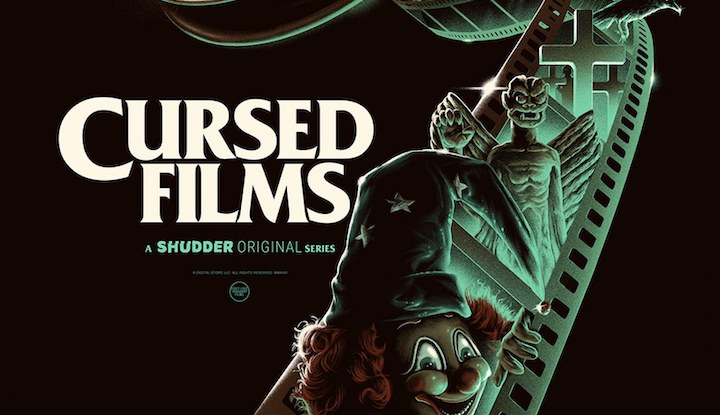 People want a total understanding of what is happening in the world. That’s explored through physics, chemistry, biology, psychology, economics, philosophy, religion, and more. It’s a hunt for answers in an existence that seems elusive at providing them. Conspiracy theories are another outcropping of this want, as they have risen in the past years (made manifest by the current occupant of the Oval Office).

There’s a double-edged sword to assigning responsibility (or blame) for events—it’s an uncomfortable truth that hopes to avoid future tragedies while offering comfort in knowing that someone (anyone—God, trilateral commission, lizard people, Illuminati, covens of witches, satanists, Knights Templar, Deep State) is actually in control.

Otherwise we are left with a sobering truth that shit happens, often for no greater purpose or reason, and we have to figure out how to proceed from there. Cursed Films isn’t about conspiracies, per se, but about a group of five films that have a lot of odd circumstances and tragedies tied to them over the years and why people believe there is a greater force at work. 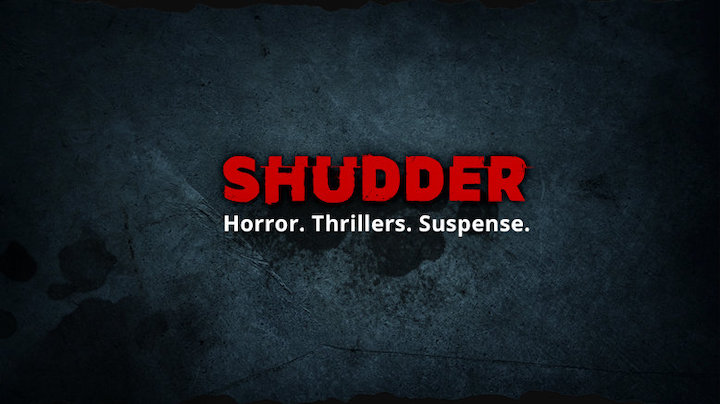 Cheel, who is the editor/writer/director/creator of Cursed Films and mostly known for documentaries and shorts, examines five notorious movies that people believe are cursed due to odd and/or dreadful events surrounding their production, cast, crew, or other connected elements. THE EXORCIST, POLTERGEIST (1982), THE OMEN (1976), THE CROW, and THE TWILIGHT ZONE: THE MOVIE each have their own devoted episode and are given about 30 minutes to establish the film, the bizarre and awful elements surrounding it, and then speaking with various folks about their own beliefs and experiences.

Some of these people worked on the films (directors, F/X people, producers), some of these people are horror super fans that work in the industry now (April Wolfe, Phil Nobile, Jr., Ryan Turek), and then some are “experts” in fields of study as well as more unorthodox backgrounds. (I put expert in quotes not to diminish anyone’s credentials or suggest they are not studied folks; it just seems hard to be a true expert in practicing black magic or even in knowing how a curse would work.) The series was supposed to premiere at SXSW 2020 with a select few episodes but, for this review, we were given two entries—the ones covering POLTERGEIST and THE OMEN. Therefore, some of this review cannot get into specifics of the other three installments of Cursed Films—but extrapolating about how they were handled based on the selections provided. 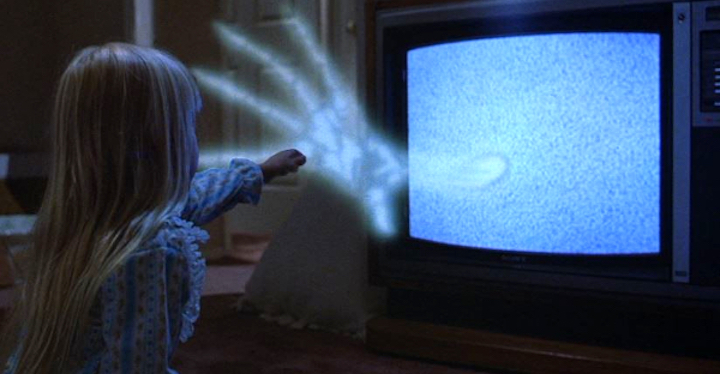 Much of the “facts of the case” are known to horror fans, film aficionados, and the more morbid amongst us. With the POLTERGEIST chapter of Cursed Films, the curse seemingly reveals itself through the deaths of four of its actors (especially the very young Heather O’Rourke and Dominique Dunne) and is believed to be connected to the use of “real skeletons from India” in the pool scene. Cheel interviews horror enthusiasts and film industry folk, including with Gary Sherman (co-writer and director of POLTERGEIST III) and Craig Reardon (who was in charge of Special Effects Make-Up on the 1982 film). There is a visit to the real house (exterior) featured in the original film which has become an attraction in the increasingly popular activity of visiting filming locations (particularly for horror films). 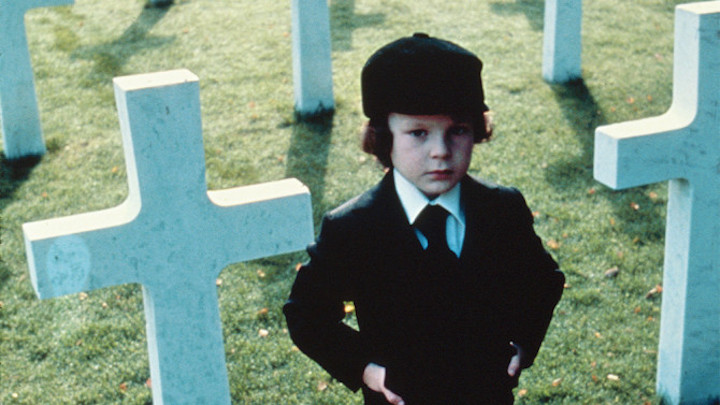 Similarly, THE OMEN brings in horror enthusiasts and industry people, OMEN director Richard Donner (SUPERMAN, THE GOONIES) and producer Mace Neufeld (THE FUNHOUSE), some professors on religious studies, and a couple of witches and/or black magic practitioners. That looks at the various disasters surrounding filming—like the car stalling for real during the baboon frenzy scene, or planes being hit by lightning, bombings occurring near to where the cast was staying, and a few grisly and unfortunate deaths.

Both episodes of Cursed Films follow a fairly similar trajectory: the urban legends around the films are explained, detailing when and how various events occurred, and how it has added an additional spooky layer to these renown horror movies. Someone is usually brought in to explain how curses can work, or why this particular film may have been cursed (according to the legend as well as lore about curses), and then there is cutting back and forth between two sets of experts—that is to say, the rational scholars that dismiss the idea of such hexing and the supernatural scholars who believe these pernicious bad spirits are around us. In the end, people (as in the filmmakers involved and others) usually weigh in with their own opinions on if they are cursed films, but it’s left to the audience to decide if these events are coincidences or evidence of something else. 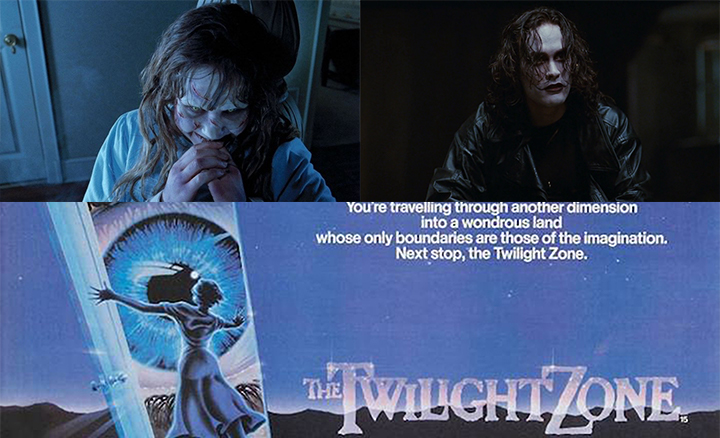 It will be curious to see how people react to Cursed Films. It’s probably going to end up being a bit of a Rorschach Test where viewers’ own beliefs will lend credence to one side or the other. Since metaphysical occurrences like curses and other supernatural ties are incredibly hard to prove, there is no way for Cheel and company to have any rock solid evidence that definitively states it had to be an otherworldly force. But there are persuasive interviews with occult experts and there is enough in some instances where people already of that persuasion will see it all as a pattern that points to something sinister at work. Others that tend to employ math and probability will of course see a series of coincidences that doesn’t overturn any known law of averages or defy reason.

Cheel doesn’t lay his thumb on the scale one way or the other, nor does he and his team seek to undercut one side or the other (playing the occultists up as weirdos or the logical scholars as people without passion or beliefs of their own). It ends up being an X-Files-like Mulder and Scully pairing where there is evidence for the believers and the skeptics alike.

Cursed Films shines brightest in two aspects: breaking down complicated psychological/cognitive theories into very easy to understand ways and the interviews with the filmmakers involved in the story. When looking at confirmation bias, or magical thinking, or the need for discerning patterns, it can be very hard to wrap one’s head around—and also hard for people to explain these concepts without sounding like jerks. Instead, the experts that Cheel brings in are able to succinctly explain the ideas and do so in sympathetic ways that don’t make it seem like having faith or superstitions are dumb but completely understandable in a chaotic world.

The interviews with Sherman, Donner, Neufeld, and Reardon are incredibly engaging because it’s very easy for this all to be seen as a fun urban legend. An element of the relatively recent rise of True Crime genre that is always a bit awkward is that, no matter how fascinating or bizarre the story is—it’s important to remember that these aren’t characters in a tale. These are real people. Heather O’Rourke was a real 12-year old girl who died due to misdiagnosis and an untreated medical condition. Interviewing people involved with the making of the films, who knew the deceased, makes it less of a giddy time shooting off theories and more of a fair and honest look at the events without trivializing the real human costs involved.

Cursed Films is a strong blend of filmmaking history, occult education, investigations, and psychological exploration. The episodes go by quickly and, even when covering information that may be known to the viewer, offer up inventive ways of approaching the material and presenting the situations. Upon pitch, it probably sounded like a morbid way of using the formats of Netflix true crime docuseries along with Unsolved Mysteries.

But the execution shows that Cursed Films is interested in exploring not just the lore of a film, but the human faces of the tragedies, and the reasons why people invoke curses and other forces to explain so many dire events. It isn’t revolutionary in uncovering new information (for most horrorhounds) or even in the rational and occult explanations it puts forth. But Cursed Films ends up being an engaging way of learning about histories of these productions and the people that are too often relegated to gruesome trivia instead of once living human beings.