Who doesn’t love an advent calendar? Around the Daily Grindhouse virtual offices, we decided the only way to make the advent calendar better is to replace what you might traditionally find behind the door with Christmas horror movies! So everyday from December 1st through to Christmas, we will be highlighting a different movie for our horror-loving readers to celebrate the season. Our film for Day Twenty-Five is DON’T OPEN TILL CHRISTMAS! 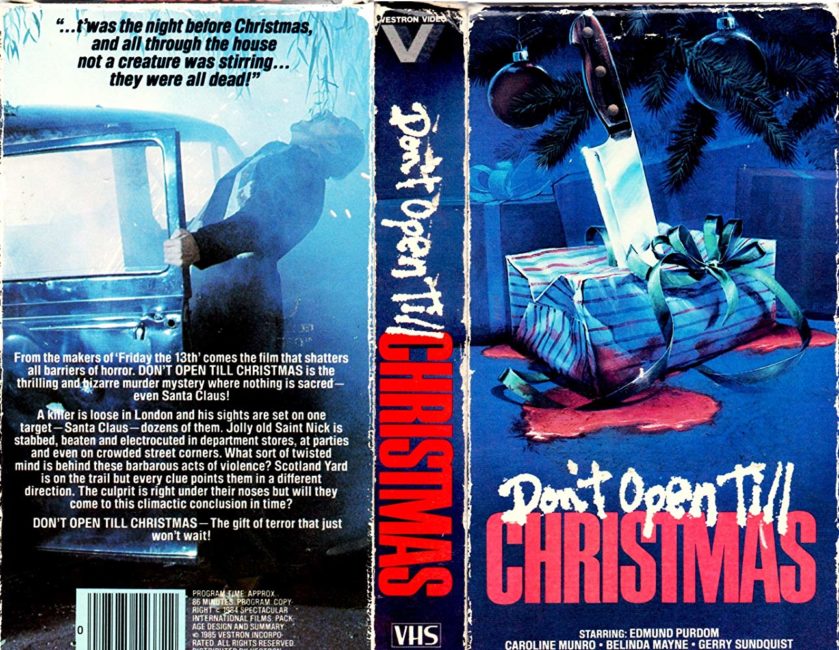 Dick Randall was the preeminent low budget sleaze pioneer, a role he carried until his death in 1996. His produced works often dabbled in genres like kung-fu (Weng Weng films, Jackie Chan beat ‘em ups, and Bruce Lee imitators) to sexploitation (steamy Emmanuelle movies), and family entertainment (yeah, he produced the abysmal POD PEOPLE). The films that Dick Randall produced were the kind of films that you could smell (wet sawdust if we’re taking a sniff test), the kind of films that were seen in cut-rate theaters where the floors were sticky with all manner of discarded substances, both from people and concessions. These, of course, were their charms. But for me, Randall’s output was always about the slasher films, and he produced three that are often revered in the trash-loving community: 1982’s PIECES (which he wrote the screenplay for), 1986’s SLAUGHTER HIGH (in which he has a bit part), and today’s entry, the greasy DON’T OPEN TILL CHRISTMAS.

With most Christmas slashers (CHRISTMAS EVIL, SILENT NIGHT, DEADLY NIGHT, TO ALL A GOODNIGHT), the main drive of the film is people getting slaughtered by a killer in Santa Claus’ getup (other than BLACK CHRISTMAS). Here, the wrinkle to the slasher setup is that DON’T OPEN TILL CHRISTMAS revolves around a masked killer (his mask resembles the killer’s from ALICE, SWEET ALICE) who is slaughtering men dressed as Father Christmas (hey, it’s a British film!) and the inspectors at New Scotland Yard must try and stop the murderer from continuing his slay ride. The film is authentically grimy. One feels that the production crew scouted for the seediest spots of London to begin filming–blocks littered with gangs, punks, peep shows, and triple x movie houses–basically the kinds of places that you don’t go after dark unless you’re packing some heat. 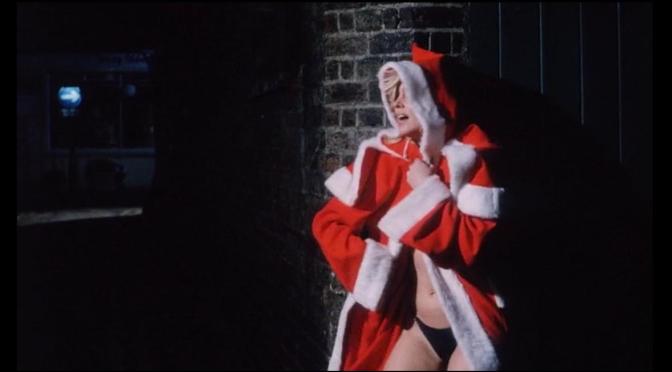 In keeping with the traditions of Christmastime horror films, DON’T OPEN TILL CHRISTMAS is a real mean-spirited scamp. Almost all of the victims are leering perverts, drunks, and derelicts, giving the film a real crapsack view of the United Kingdom. The murders of the various men are fairly nasty, ranging from stabbings, immolations, strangulations, castrations, and are clearly the film’s major draw (other than some gratuitous nudity to give some flesh flavoring amongst the onslaught of carnage). The film also has the guts to (SPOILER) wipe out the entire cast, with the final victim getting knocked off approximately twenty seconds before the credits roll.

What frustrates me is that despite the near-endless parade of pain, there’s absolutely no build-up to any of the killings. Sure there’s some POV shenanigans and heavy breathing, but chances are if there’s a guy dressed as Father Christmas in a scene by himself, he’s gearing up for a toe-tag party. There are two “suspense sequences” toward the middle of the film, one where the killer stalks his prey through an admittedly badass looking museum and the second, where the maniac hunts his target through the backstage of a rock show featuring Caroline Munro (!), but more often than not, the killer will just show up and dispense with the victim and that’s that. 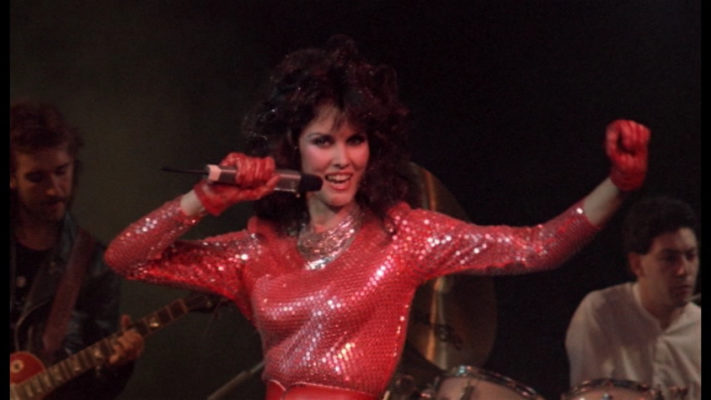 There’s also a frustrating inconsistency to how the madman goes about his business. His roster of dead meats always includes men dressed as the jolly fat gift giver, but he kills a woman in the film’s cold open (who WASN’T dressed like Father Christmas). Then, he WON’T kill a woman who IS dressed like Father Christmas. Later, he’ll take a woman hostage towards the end of the film, which isn’t his established modus operandi (she witnessed him murdering one of the victims).

Part of the film’s disjointedness is a result of the behind the scenes messiness. Lead actor Edmund Purdom quit as director (his sole directorial effort, in fact), but is still credited as captain of this ship. The credited screenwriter, Derek Ford, took over as director but then got canned after two days! Then, two other folks were brought in to touch up the film, Ray Self in the directing capacity and Alan Birkinshaw to reconfigure some of the scenes, notably the scene in the “murder dungeon” and the film’s ending. Now you can see why the film has an erratic nature, sometimes from scene to scene, sometimes within the same scene (note a potential victim’s reaction to getting a weapon hurled at their head from shot to shot). The killer’s motivation hilariously comes seconds before the credits roll, similar to HE KNOWS YOU’RE ALONE. Said motivation? Father Christmas was snogging dear old mom. 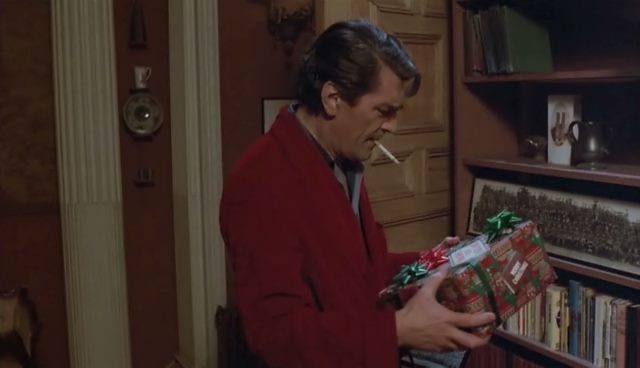 The plot is rail thin, though that’s not really the thing that matters with these sorts of films. There’s a murder, the police BARELY investigate, and then there’s another murder, rinse and repeat. There’s not really a sense of urgency to the investigation (there’s an unseen commissioner who seems to be on the Chief Inspector’s ass but that’s all we get). In fact, the daughter and boyfriend of the film’s second victim seem to have more investment in collaring the baddie, whereas the Chief Inspector seems more concerned on whether or not the girl and guy are going to get married! The only time the film gains its pulse is when the jig is up and we finally reveal who the killer is, which is in the last ten minutes or so, and the film shifts focus away from our ostensible lead to a character who has only been in a few scenes who then quarrels with the killer! The male lead? He disappears entirely. At least there is some semblance of mystery regarding the killer’s identity. It’s precisely who you’d think it would be, but there’s at least enough doubt placed by the script that would cause you to think it might in fact be someone else. Call it the Billy Loomis effect.

DON’T OPEN TILL CHRISTMAS has a truly bizarre sense of what passes for humor, one of the girls in the film works at a peep show and dialogue reveals that she’s just filling in for her mother…who owns the peep show. Nepotism, baby! The film also traffics in ugly gay panic, whether it be our lead actor (if you could call him that) hollering to a barely dressed woman (who is dressed like Father Christmas herself) that a couple of bobbies will confuse them for “gays,” and then the second victim of the film worrying that he’s put too much makeup on and that he’ll be mistaken for “an old queen.” I mean, come on, the ’80s. Get your shit together.

Despite the film’s wonkiness, I liked it as a shaggy dog effort but I’m a slasher/trash completist. Others would be just fine with any other Yuletide slasher effort because unfortunately, this film is a YouTube compilation (yes, there are kill comps) in search of a plot. It provides adequate menace, but that’s about it.

DON’T OPEN TILL CHRISTMAS was released on December 21st, 1984 (they failed their own title). It’s not a tremendously long film–eighty-six minutes soaking wet–so there’s not a major time investment. It’s actually funny that the other big Christmas horror film that year, SILENT NIGHT, DEADLY NIGHT courted more controversy because I’d think that kids would be more traumatized by Santa being killed over and over again than one crazy Santa doing dirty deeds. 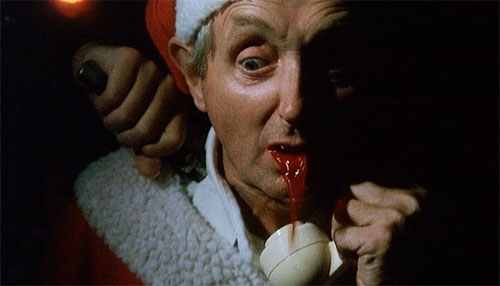