Who doesn’t love an advent calendar? Around the Daily Grindhouse virtual offices, we decided the only way to make the advent calendar better is to replace what you might traditionally find behind the door with Christmas horror movies! So everyday from December 1st through to Christmas, we will be highlighting a different movie for our horror-loving readers to celebrate the season. Our film for Day Eighteen is SLAY BELLES!

We can safely say now that Krampusploitation is here to stay. For too long, horror movies have had to make due with slashers in Santa hats if anyone wanted to make something around December. It was cool for a while, but the genre needed to find a better way to vent the bullshit that came with Christmas cheer. Then we remembered Krampus, and the violent delights and ends we craved during the Yuletide season were unleashed on screens by a monster both old and new. Terrorizing Pagan children centuries ago, entertaining monster kids today. SLAY BELLES is the latest to grab Krampus by the horns, and is one of the more original takes. 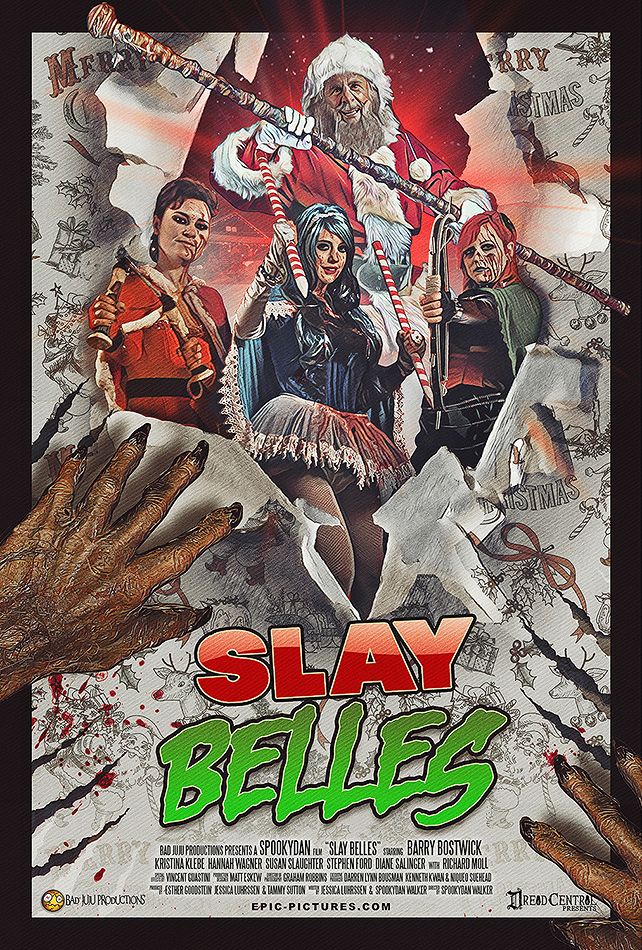 SLAY BELLES is great because it knows what it is and everyone involved is there to have fun. All roads for the major players lead to THE DEVIL’S CARNIVAL series: the director and co-writer (SpookyDan Walker and Jessica Luhrssen) as well as the leads (HALLOWEEN‘s Kristina Klebe, Susan Slaughter, and Hannah Wagner) were involved. Darren Lynn Bousman even serves as an executive producer with a cameo. At 77 minutes, it’s the kind of horror flick that gets in and gets out before your pee break. It would’ve definitely been at home on USA Up All Night (the Rhonda Shear era).

It’s also definitely a flick that happens now. The story revolves around three urban-exploring ladies (they go to abandoned places and post videos about it on their web site) who go to a run-down Christmas theme park. They serve up the cheesecake throughout the flick like Dita von Teese. They eventually find Krampus (or rather, he finds them), and it’s up to a burnt-out biker of a Santa to help save the blood-drenched day, played by Barry “Brad!” Bostwick. What’s interesting about SLAY BELLES is how it reminds us that Santa and Krampus are closer to each other than we would think, and that it managed to get this Grinch to care about anything related to Christmas for 77 minutes.

Epic Pictures released an amazing Blu-ray in a time when no one bothers to do so for new movies. It comes with a commentary, a making-of that’s almost an hour long and goes beyond the usual EPK boregasm, and a few other fun special features. Epic Pictures is definitely a company to keep your genre eye on, if yours aren’t there already. They’ve been releasing some fantastic genre work like THE LODGERS, EXTREMITY, IMITATION GIRL (starring Lauren Ashley Carter), TURBO KID, and TALES OF HALLOWEEN, while also putting out docs like Kane Hodder’s TO HELL AND BACK. With each Blu-ray loaded with special features. Their crowning achievement this year, in my eyes, is something that came with their IMITATION GIRL Blu-ray: NINA FOREVER. It’s basically about a new couple who’s literally haunted by the memory of an ex, but there’s so much more going on under the surface. Especially with how things get resolved.

So yeah, SLAY BELLES is a very fun and bloody sleigh ride that you should give a shot with some friends. Or some family, if you want them to hit the road early. Could’ve used a little less dubstep, though…