There’s no shortage of “killer (noun)” movies, where a mundane, essentially neutral object that has no association with being Good or Evil suddenly turns on people and kills those around them. THE CAR, DEATH BED: THE BED THAT EATS, MIRROR MIRROR (1990), THE LIFT, KILLER SOFA, MAXIMUM OVERDRIVE, THE MANGLER, and on and on (not even counting murderous dolls or aggressive animals). Sometimes it’s witchcraft, sometimes it’s technology run amuck, but always it’s an unexpected twist on something believed safe and benign that no one suspects even as the bodies pile up. Sometimes there’s some awkward element of commentary about consumerism, societal dependence on technology, or the general hubris of mankind that becomes its own downfall—but that rarely works and more often than not feels like a hastily thrown together afterthought. The latest film from Peter Strickland, IN FABRIC, uses this worn out trope as a springboard for one of the best films of the year. 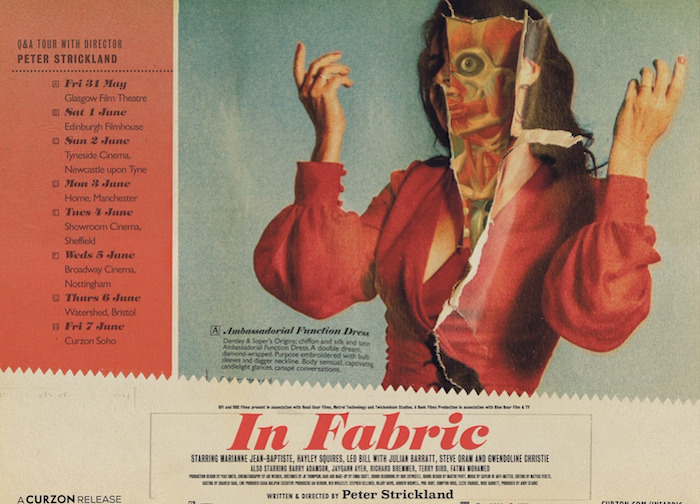 In Strickland’s previous two feature outings, the writer/director has shown a deep knowledge and appreciation for subgenres within horror. There is a specificity to his films that reveals a studious approach to noting not just the recurring tropes of a niche category, but also the very specific details of its heyday in terms of color palette, framing, and period elements that add a true sense of authenticity. Strickland uses this familiarity to create a foundation for his pictures to then go off into different, unexpected directions. BERBERIAN SOUND STUDIO is a meta-textual giallo film that veers into a bit of an absurdist Italian new wave take on crumbling sense of reality. THE DUKE OF BURGUNDY has the glossy sheen of the eurotrash exploitation of Jean Rollin and Jess Franco with their sexually charged attempts at titillating transgression before it becomes a much deeper and more engaging character study that examines the subtle (and not so subtle) dynamics in a relationship.

IN FABRIC similarly starts off seeming to be one type of film—a killer dress film where a cursed object haunts and strikes down scores of people—while slowing mutating into a bugnuts insane movie that pulls from the supernatural works of Argento and Bava, with hilarious jabs at the absurdity of capitalism, and all manner of other weird elements that slam together in ways that shouldn’t work but are actually brilliant.

Sheila (Marianne Jean-Baptiste) is a recently divorced, older woman who works as a bank teller for bureaucratic managers, gets in arguments with her son, Vince (Jaygann Ayeh)—usually about his rude and meddling girlfriend, Gwen (Gwendoline Christie)—and is timidly trying to get back into the dating scene. Only finding duds through the personal ads, she desperately wants love or something exciting and interesting to make her feel valued. Enter Dentley & Soper’s, a department store that promises exceptionally great bargains for its clothes, and a bewitching salesperson named Miss Luckmoore (Fatma Mohamed) who promises that a special red dress will fulfill her in ways that Sheila can’t even begin to fathom. Soon accidents begin to happen, rashes show up, people start dying, the dress ominously floats over Sheila as she sleeps, and eventually the Dentley & Soper’s manager Mr. Lundy (Richard Bremmer) jerks off onto an anatomically correct mannequin. You know…that old chestnut. 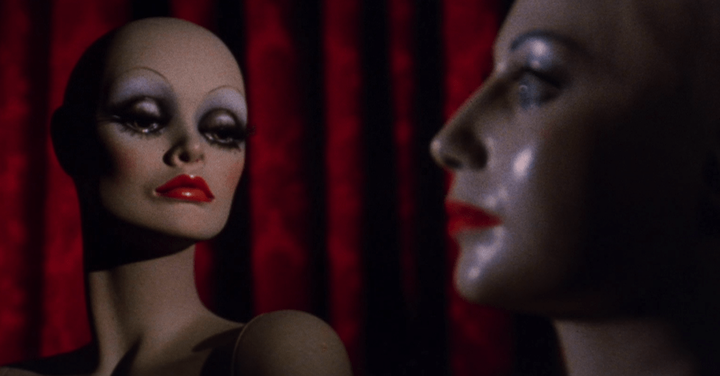 There is a ton more to the plot of IN FABRIC, with diverging storylines and surprising characters popping up throughout its runtime that all orbit around this bizarre occultish department store. But it would ruin some of the surprises to invoke all of the zigs that Strickland chooses over the zags of where an audience would expect a killer dress movie to go. As Daily Grindhouse reviewer Jason Coffman wrote, after seeing it at Fantastic Fest in 2018, this is a masterwork of a film.

There is plenty of haunting imagery and creepy elements that clearly establishes IN FABRIC’s horror pedigree, but departs into this outlandish world Strickland has created with a department store coven, a mesmerizing washing machine repairman, trance-inducing commercials, and absurd corporate red tape that a free floating killer dress that may or may not be haunted and/or cursed is literally the least weird thing about this movie.

All of the performances are great and played perfectly straight without any winking or hamming it up. Deserving of special recognition, though, are Mohamed, Jean-Baptiste, Leo Bill as the aforementioned repairman, and Steve Oram and Julian Barratt as the bank managers. IN FABRIC is constantly progressing and one-upping itself with how weird everything is getting, and that just makes all of the ostentatious dialogue and juxtaposition of the mundane and the supernatural even more hilarious.

Beautiful imagery of this red flowing dress, and arcane rituals, along with perfectly ornate sets and production design are also something rarely seen in comedies, much less horror throwback comedies. The costume design alone is incredible, with everything from ’80s and ’70s polyester drabness, to incredibly intricate designs that would feel at home in a Jodorowsky picture. It is captured perfectly by DP Ari Wegner, with these Kubrickian-framed scenes segueing into visuals more akin to SUSPIRIA and INFERNO-era Argento, all while highlighting a genius blend of vibrant colors and washed out palettes reflective of decades past.

The sound design is of particular note—if you can’t see this in the theater, try to watch with headphones or on VOD with a really good speaker system. There is such painstaking detail in having voices and sounds coming from all directions that it ends up becoming an almost immersive experience. The score, by Cavern of Anti-Matter, is equally hypnotic and adds to a movie that seemingly engages all the senses for a lush cinematic event. 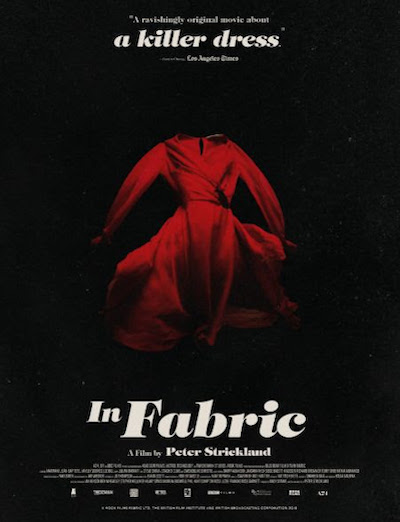 IN FABRIC won’t be for everyone. People merely interested in gore or shock will probably get bored (even though, if they stick around, there are some great gory bits and truly shocking sequences). Those that judge anything horror-related to how scared it makes them will be disappointed as it uses nightmarish depictions but draped in a cloak of absurdity to insure it won’t really spook anyone. But for everyone else, they will discover a gorgeously shot and impeccably designed film that wears its horror nerd heart on its sleeve while delivering brilliant comedy that feels utterly fresh. IN FABRIC is a peculiar creature that straddles two genres (and subgenres within those, no less) while pulling from obscure predecessors. But Strickland’s latest isn’t a pastiche—instead it’s an ingenious amalgamation of influences with a unique personality and flavor all of its own that is technically sumptuous, narratively surprisingly, and utterly perfect.