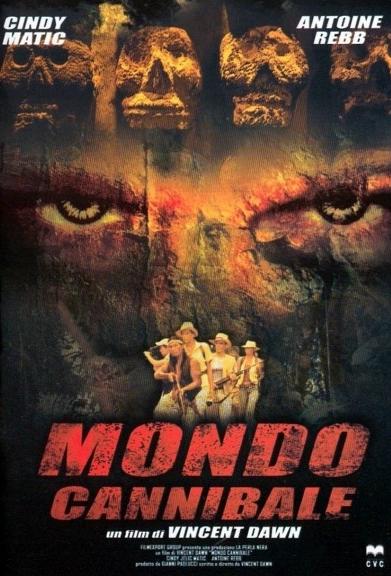 It’s probably a safe bet to guess that Intervision was banking on the theatrical release of Eli Roth’s THE GREEN INFERNO to stoke interest (and hopefully demand) in the Italian cannibal films to which Roth pays tribute in that film. Unfortunately, it’s now been two months since that film’s supposed release date and there’s no end in sight to that film’s weird distribution troubles, but Intervision/Severin have gone forward with their release of two late-period Bruno Mattei cannibal films anyway.

Mattei, maybe best known for sleazy  70s and 80s exploitation fare such as SS GIRLS, HELL OF THE LIVING DEAD, VIOLENCE IN A WOMEN’S PRISON, and at least two films with “Caligula” in the title, worked regularly from the late 70s up until his death in 2007. While best known for his work in 70s and early 80s, Mattei took a run at resurrecting the cannibal film—or at least making a quick buck—in the early 2000s with a double feature of suspiciously similar films: MONDO CANNIBAL (aka CANNIBAL HOLOCAUST: THE BEGINNING) and IN THE LAND OF THE CANNIBALS (aka CANNIBAL HOLOCAUST 3: CANNIBAL VS. COMMANDO). Intervision has given these two films a new DVD release, but the question is: Are they worth it?

MONDO CANNIBAL is more or less a straightforward remake of Ruggero Deodato’s CANNIBAL HOLOCAUST, although with a focus on the bloodthirsty nature of television ratings competition that takes up a good part of its running time. Grace Forsyte (Helena Wagner) has just found out her popular investigative journalism series has been canceled due to a minuscule drop in the ratings. When she sees her former partner Bob Manson (Claudio Morales) doing a series on ecological problems caused by industrialization of South American rain forests and the impact on local natives, Grace is inspired to pitch a new series to her network. This time, she won’t be chasing human interest stories. Instead, she’ll team up with Manson and their old crew to plunge into the jungles of South America in search of cannibals, each episode offering up more and more gruesome sights for an increasingly jaded audience. Despite Bob’s warnings that virtually no native tribes still practice cannibalism, the crew stumbles upon scenes of people eating people more or less non-stop once they set off into the jungle, and the TV executives back home are ecstatic about their spectacular ratings. While nowhere near as gruesome as CANNIBAL HOLOCAUST, MONDO CANNIBAL does feature some unpleasant stock footage (possibly on loan from National Geographic, it’s the best-looking footage in the film, which otherwise is shot on hideous digital video) and a small alligator meets a very unfortunate on-camera demise. Other than that, it’s strictly amateur hour stuff for the makeup and gore effects, and that extends to pretty much every other aspect of the film. When Grace offers to work with Manson again, she pitches it as an escape from the “pukey shit hell” where he is currently living. Later, a character says their nervous stomach feels like “palsied butterflies.” And in case the TV crew gleefully setting villages on fire and raping the natives doesn’t make it clear enough, at one point a TV exec looks directly into the camera—at us, the complicit audience, right folks?—and actually says “I have to ask myself: who are the REAL cannibals?” If the film wasn’t so mean-spirited and violent, MONDO CANNIBAL could probably find an audience among people who love movies like THE ROOM.

Despite sharing the same release year and some cast members and clearly being shot at or around the same time (and with the same awful digital cameras), it doesn’t take long for IN THE LAND OF THE CANNIBALS to distinguish itself as a much different film from MONDO CANNIBAL. Improbably, IN THE LAND OF THE CANNIBALS appears to be Mattei’s tribute to James Cameron’s ALIENS, complete with one character named Cameron and, just to make it absolutely unquestionable where the film is coming from, a bad-ass female soldier named Vasquez! He substitutes cannibals for aliens, obviously, but constantly reminding people of an exponentially better film they could be watching instead of the one they actually are watching is never a good idea. Anyway, a group of mercenaries is sent into a deep jungle to find the daughter of a U.S. Senator and bring her back home, but they run into cannibals, and things go about as well as one would expect in this kind of movie.

Sadly, IN THE LAND OF THE CANNIBALS is nowhere near as unintentionally entertaining as MONDO CANNIBAL. There’s the same requisite animal cruelty (a small pig is killed off-camera; a snake is killed very on-camera), and loads of fake blood and body parts. There’s not nearly as much dialogue, though, with a good chunk of the film’s running time made up of everyone carefully walking through the jungle and not talking. This becomes mind-numbingly dull very quickly, and the occasional “action” scene is nowhere near enough to make up for the long stretches of boredom. This is just an ugly, boring slog.

Anyone looking for the kind of cheap thrills offered by the Italian cannibal films of the ’70s and ’80s will likely be disappointed by these releases, although MONDO CANNIBAL does a decent job of re-creating those films’ naked exploitation in the name of “social criticism.” Intervision’s DVDs are probably the best these films have ever looked, although that’s not saying much. Clearly made with home video in mind, both films are displayed in 4:3 (square) aspect ratio, and the early-2000s digital video with which they were shot does no favors to the actors or the cheap effects. It’s tough to recommend these films to just about anyone other than rabid Bruno Mattei fans, assuming such people actually exist. Horror fans in general will probably be put off by the pointless animal cruelty and ineptitude of the film-making, and anyone not interested in movies with the word “cannibal” in the title sure as hell aren’t going to change their mind after watching either of these films. If anything, they throw into stark relief the difference between sleazy Italian exploitation films of the ’70s and those of today, and unsurprisingly, the ’70s wins.