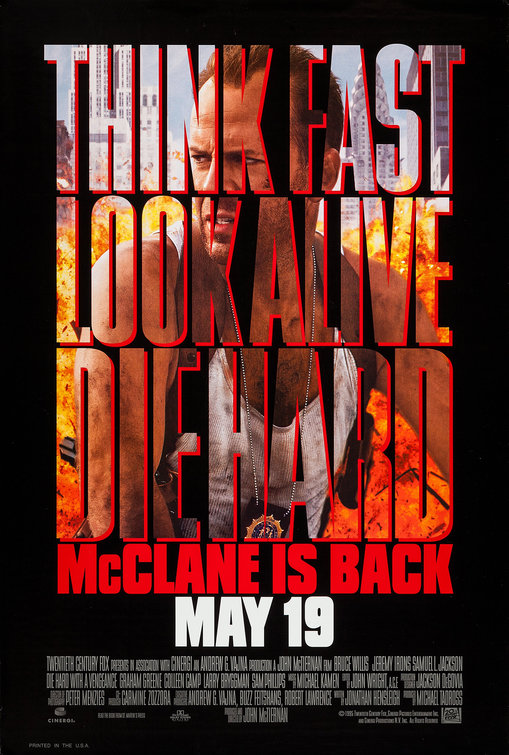 The first DIE HARD was a total game-changer as far as American action movies go. There were basically three templates for action films prior to this – the DIRTY HARRY model (cop or military dude who plays by his own rules), the DEATH WISH model (vigilante movies) and the 48 HRS. model (mismatched buddy movie). DIE HARD set its own standard, basically starting the whole “one lone man against overwhelming odds” model that lots of great movies (like UNDER SIEGE and SUDDEN DEATH) would go on to use. DIE HARD is an all-time classic movie, and it launched Bruce Willis as not only an action hero, but an out and out movie star. Bruce Willis really has had an odd career, obviously he’s most famous for his action roles, but he did branch out and has had a rather diverse IMDB page compared to most action stars. 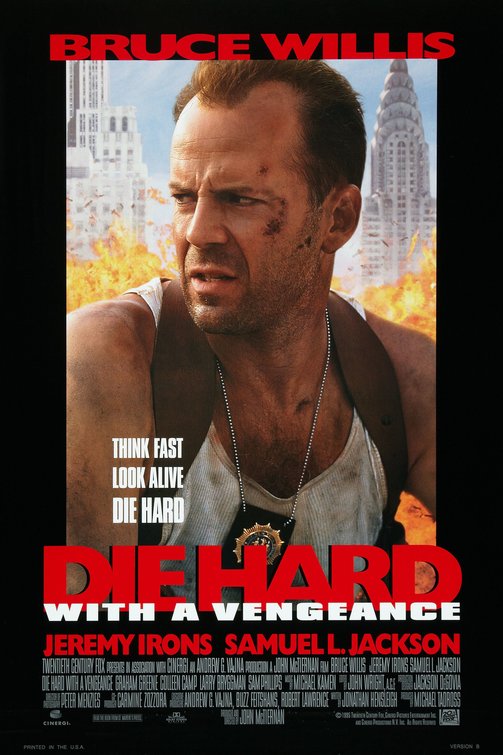 But you know, there was still a lot of ground to cover (and money to make) with the DIE HARD franchise, the story of the world’s most unlucky beat cop, John McClane, so 1995 brought us Bruce Willis in the second sequel; DIE HARD WITH A VENGEANCE. It’s our first snapshot of McClane in his regular life as an NYC police officer. Like all good cops in action films, he’s on suspension when the films starts. And he’s hungover! One thing you have to give to Bruce Willis – you actually believe he’s a dude who is hungover and having a shitty morning. Most of the time the stars in action movies wake up in dirty apartments with beer bottles and pizza boxes all over the place, but then you look and them and they’re perfectly-tanned dudes with $200 haircuts who clearly spend 30+ hours a week in the gym. That’s not what dudes who live that life look like. But John McClane actually kind of looks like an off-duty cop who was out drinking until 4 in the morning who needs a few more hours sleep and a shower. Part of the charm of DIE HARD films, and what makes Bruce Willis the relatable action star is that Bruce is not some karate expert and doesn’t look like a pro athlete jacked out of his mind on steroids – he’s like the optimal version of your dad’s buddy who’s a cop. 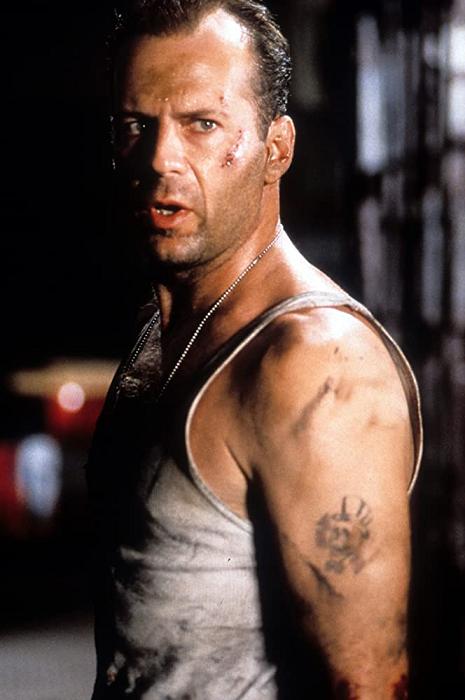 This brings us to the plot of DIE HARD WITH A VENGEANCE. There is a bombing first thing on a summer NYC morning, and shortly after the bomb blows the bomber gets in contact with the NYPD because he’s got some plans for John McClane. Next thing you know, John McClane is marching through Harlem wearing nothing but his boxers and a sandwich board with a racist message on it. There’s a lot in this film that hasn’t aged well, and this scene is probably one of them, but it does introduce McClane to Zeus Carver, played by Samuel L Jackson. Zeus is awesome – he’s an electrician who owns a repair shop who doesn’t like white folks and swears a lot. Truly, the role Sam Jackson was born to play. The head terrorist is played by Jeremy Irons who is going by the name Simon. He winds up having McClane and Zeus race all over town in a crazy game of “Simon Says,” making them solve problems or he’ll blow more shit up.

It turns out, Simon the terrorist bomber is actually Simon Gruber, brother of Hans Gruber, who of course was one of the all-time great movie villains in the first DIE HARD film. When the CIA dudes are briefing McClane with the intel they had on the case, they have the audacity to ask him “Does the name Gruber mean anything to you?” OF COURSE IT FUCKING DOES. I suppose the movie does something this stupid to offset the fact that most of the NYPD and law enforcement are actually rather competent in this film.

Not to get sidetracked, but I’m not sure why at this point in the DIE HARD saga, this dude is still a regular cop. Over the course of the first two films, John McClane has stopped two major terrorist attacks, and he basically did it by himself. How is he not like one of the most celebrated people in America? Hell that pilot Sully had a movie made about him and all he did was land a plane in the Hudson River. John McClane should be a hero of law enforcement, and one of the most famous people in the country at this point. Maybe some sort of top notch anti-terrorism expert. Or, at the least, he should be hosting a show on Fox News and have a few books out.

Anyway, like most ’90s action films, there is more plot than needed in this flick. It is dizzying watching Willis and Jackson racing around the city, solving Simon’s puzzles. Of course, since it’s a DIE HARD movie the bombings are all a charade to keep local law enforcement running around town trying to prevent another bombing while Simon and his gang are really here to rob the Federal Reserve. The movie kind of jumps along scene to scene and doesn’t always flow they way you’d like. Also, it’s kind of confusing because some of the puzzles make no sense. I’ve watched this movie a dozen times or so and I still don’t think I understand the bit with jugs of water. Of course, that could be because I drink too much around the house and am shitty at math.

Don’t get me wrong though, this movie absolutely rules.  The performances are all great, and the stunts and action are innovative and super well-shot. It’s not a surprise that the two best DIE HARD films (the original and this one) were directed by John McTiernan (PREDATOR). Even though there are tons of action movie clichés all over this movie, and the third act of the film seems like it’s missing three or four scenes, there are also lots of surprises and plot twists to keep you interested and have you overlooking the faults of the film. 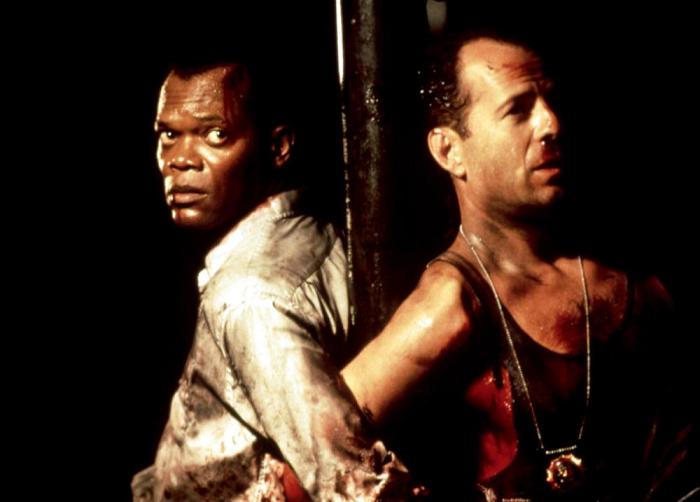 As I mentioned before, there is quite a lot in the film that hasn’t aged well. I can’t imagine anyone would find the film problematic, but it’s clearly a movie of its time. Zeus and McClane have a few uncomfortable arguments about race, and I think we can all agree giant explosions in NYC haven’t aged well either. The thing that has aged the worst though is when the sassy African American phone operator lady makes a joke about how she wants to marry Donald Trump.

Of course, at the end of the movie after a series of insanely unlikely events, John McClane and Zeus track the bad guys down. Bruce kills a bunch of bad guys and says “Yippee ki yay, motherfucker” and everyone goes home happy. I get that it took them twelve years to get around to making another sequel (2007’s LIVE FREE OR DIE HARD) and by that time Samuel L. Jackson was as big of a star as Bruce Willis and he had all those AVENGERS checks to cash, but it’s really too bad Sam Jackson wasn’t in the last two DIE HARD movies. I have a tough time believing Zeus and McClane wouldn’t have become lifelong friends after going through all of that shit together, and there’s a great action movie buddy chemistry between Willis and Jackson. 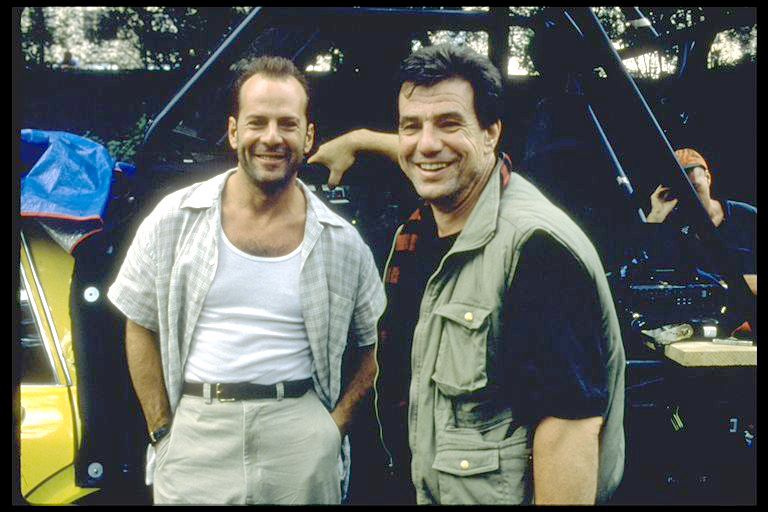 Anyway, this was the last great DIE HARD movie (there’s really only two great ones). Bruce Willis and Sam Jackson obviously went on to have amazing careers, plus they ended up shooting a few other movies together, including 2001’s UNBREAKABLE, which is a pretty great movie as well. John McTiernan had a bunch of crazy legal issues and actually wound up going to prison for a year. He hasn’t directed a film sine 2003’s BASIC.

Bruce has talked about another DIE HARD film, but I’m pretty sure 2013’s lackluster A GOOD DAY TO DIE HARD has killed the franchise off, which is probably just as well. We’ll always have Christmas at the Nakatomi Plaza…..