SHIN GODZILLA, The Big G’s latest outing and his first Japanese film since he walked off into the sunset in 2004’s FINAL WARS, finally hit U.S. theaters this week in a limited run. It’s an exciting time to be a fan of the King Of The Monsters. While the character never really fell out of the public eye thanks to numerous comics by IDW with talents such as Eric Powell (THE GOON), James Stokoe (ORC STAIN) and Matt Frank (pretty much anything kaiju related has this guy attached to it with good reason) the interest in Godzilla has grown exponentially in the last few years especially thanks to 2014’s GODZILLA from Legendary Pictures. This is great! More interest in Godzilla and kaiju in general means more love for the genre and more projects such as films, video games and more. It has brought an interesting thing to light though through the reactions to films such as GODZILLA and SHIN GODZILLA, people have very different ideas as to who Godzilla is and what he does. Is he the good guy? The bad guy? Just a destructive force of nature? It’s amazing when you begin to talk to people who are either long time Godzilla fans or just got into the franchise recently as to what there answers could be. This really brings up one of the most endearing qualities of the King of Kaiju…his ability as a character to be whatever the producers want, almost like a cinematic force of nature that changes on a whim. 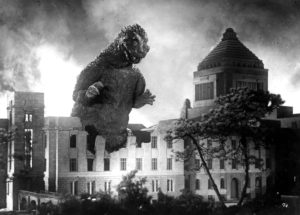 Long standing characters always go through changes, it’s just the nature of creation. Things change over time with consumer tastes, creative involvement, ownership, any number of things. Consider Batman as a prime example of this. Since his first appearance in 1939 to now he has gone through a dizzying amount of changes. From a gun using vigilante to a campy television icon and everything in between and beyond in some cases. Yet throughout all of this he has always been a consistent good guy. While the occasional turn of face isn’t uncommon with characters, heroes always returns to the side of good. Godzilla on the other hand has changed not just from being the good guy or the bad guy multiple times, he has just been a neutral force of destruction, which is an awesome idea in terms of media production. You have a character who can be whatever the writer wants and can reflect countless moods without the baggage that typically comes from a rewrite. A recent example of that baggage is the Captain America fiasco that happened over the summer. Regardless of criticisms towards the sudden backstory change and all of that you can’t deny that people were furious, going so far as the sending death threats to the writer. People who were that invested in Captain America would have had a field day with Godzilla’s ever changing character 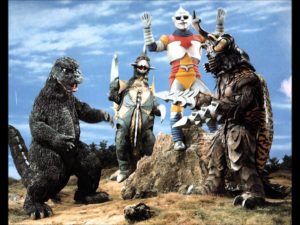 This is part of the reason watching the Godzilla films in sequential order can be a really interesting experience. You start in 1954 where Godzilla made his debut as a symbol of nuclear terror, the folly of man as the Blue Oyster Cult points out. Within this era of films, referred to as the Showa era, you get what most people think of when they think of Godzilla. Guys in suits wailing on each other with Godzilla playing the role of anti-hero to eventually becoming a full blown hero. You even get to see him be a father figure! This is the ground floor of Godzilla that really established him as the icon he is. You get all of the other classic monsters like Anguirus, Mechagodzilla and  one of his most iconic villains King Ghidorah amongst many others. Also of note is that this was kind of an early example of the shared universe concept that everyone is striving to establish nowadays with Mothra and Rodan getting their own solo outings. 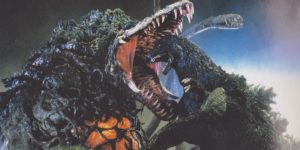 Flash forward to 1984 and you have Godzilla returning in what is known as the Heisei era which has Godzilla returning after a hiatus as a villain, which makes sense since the film was meant to be a follow up to the original 1954 film. Compared to the Showa series this era is much darker in tone while the films feature Godzilla fighting his old foes, gone are the bright skies and sillier moments, like his legendary dance from GODZILLA VS. MONSTER ZERO and the hilariously iconic tail slide from GODZILLA VS MEGALON. This is a meaner, angrier and much bigger Godzilla who shows an almost brutal disregard to everything around them except for his son. Even his former allies from the Showa era find themselves on the receiving end of his wrath. This series ends with Godzilla dying, which I’m sure if Twitter was around back then would have caused an uproar and probably a few petitions to change the ending. Even after returning in the staggered Millennium series, Godzilla never reclaimed that true “good guy” profile again. Godzilla seemed less like a villain this time around and like more of a natural disaster, similar to his first appearance but in many cases with another monster to battle which kept him from being a symbol of nuclear disaster and more of a movie monster. That said, FINAL WARS did portray Godzilla as more of a hero figure, even featuring him walking off into the sunset at the end of it all. 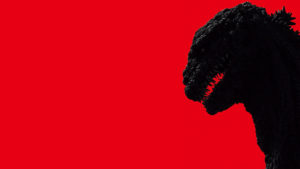 Now, we have the 2014 American Godzilla being portrayed as a hero, a force meant to be bring balance to nature sort of like his Showa predecessor but with a similar tone to the films of the Milennium era where a lot of focus is placed on the people caught in the middle. Japan appears to be going in the opposite direction with SHIN GODZILLA featuring the titular monster as a terrifying monster who will bring about the end. So going through the time line we have seen Godzilla start out as a symbol of nuclear terror, an anti-hero with monsters to fight, the leader of almost a Justice League sort of line up of fellow monsters fighting other villainous monsters, a destructive force of nature with no regard for anything with no allies other than his son and still more villainous monsters to fight with humanity stuck in between and then finally as a hero again. That’s a lot of change for a single character to go through throughout a film career and who knows what the future holds. Legendary’s Godzilla is set to fight King Kong and possibly new monsters, Toho’s Godzilla is back as a villain. The debate over which Godzilla is the best Godzilla will never truly have an answer because it all comes down to a personal preference, for a character who really doesn’t talk and has no ethnicity to speak of that is impressive and I think speaks volumes about what makes Godzilla such an amazing character in film. One thing can be sure though, kaiju is back in a big way and fans like this writer can’t get enough.