Stephen King is the most influential voice in horror of the late 20th century. His books have been best sellers since his debut and have gone on to spawn numerous adaptations in film, TV, video games, and other media. King Of All Media looks at those adaptations, starting with his TV miniseries in chronological order. Each week Alejandra Gonzalez and Rob Dean will discuss a new miniseries project of King’s, starting with 2002’s ROSE RED — written by King and directed by Craig R. Baxley.

Rob Dean: I never knew how old haunted house stories were before. The earliest recorded one is from Ancient Greece, written by Pliny the Younger. Since that very early time, there have been waves upon waves of tales of cursed locations that house angry spirits whose malevolent work upon the living remains incomplete. Today’s entry, ROSE RED, actually began life as a remake of 1963’s THE HAUNTING that King was writing for Steven Spielberg. The story takes inspiration from that movie as well as Shirley Jackson’s The Haunting of Hill House and the real life tale of the infamous Winchester mystery house. The journey from idea to realization hit a bit of a snag when King was hit by a van while walking one day, and he used writing this miniseries as a form of cathartic exercise to get back to his life.

ROSE RED concerns a team of psychics led by a university professor and researcher who wish to investigate the rumors of paranormal activity of the abandoned estate known as “Rose Red.” Built by an oil tycoon and his wife after the turn of the 20th century, Rose Red has been host to many deaths and disappearances while the increasingly crazed matriarch adds multiple weird architectural elements that are ever expanding. What will the crew find at this haunted house? And what will be the price they must pay to escape its clutches?

ROSE RED really worked for me… for the most part. It suffers similar issues with other King miniseries in terms of pacing and padding, where it feels like scenes are added for running time but don’t do anything to clarify events or characters. The lack of economy occasionally bogs it down, but director Craig R. Baxley (STORM OF THE CENTURY, ACTION JACKSON) delivers a pretty entertaining haunted house story that is reminiscent of the famous ones that came before. The production design work by Craig Stearns, building enormous intricate sets for the dilapidated mansion, is simply incredible and grounds the proceedings in a sense of location. 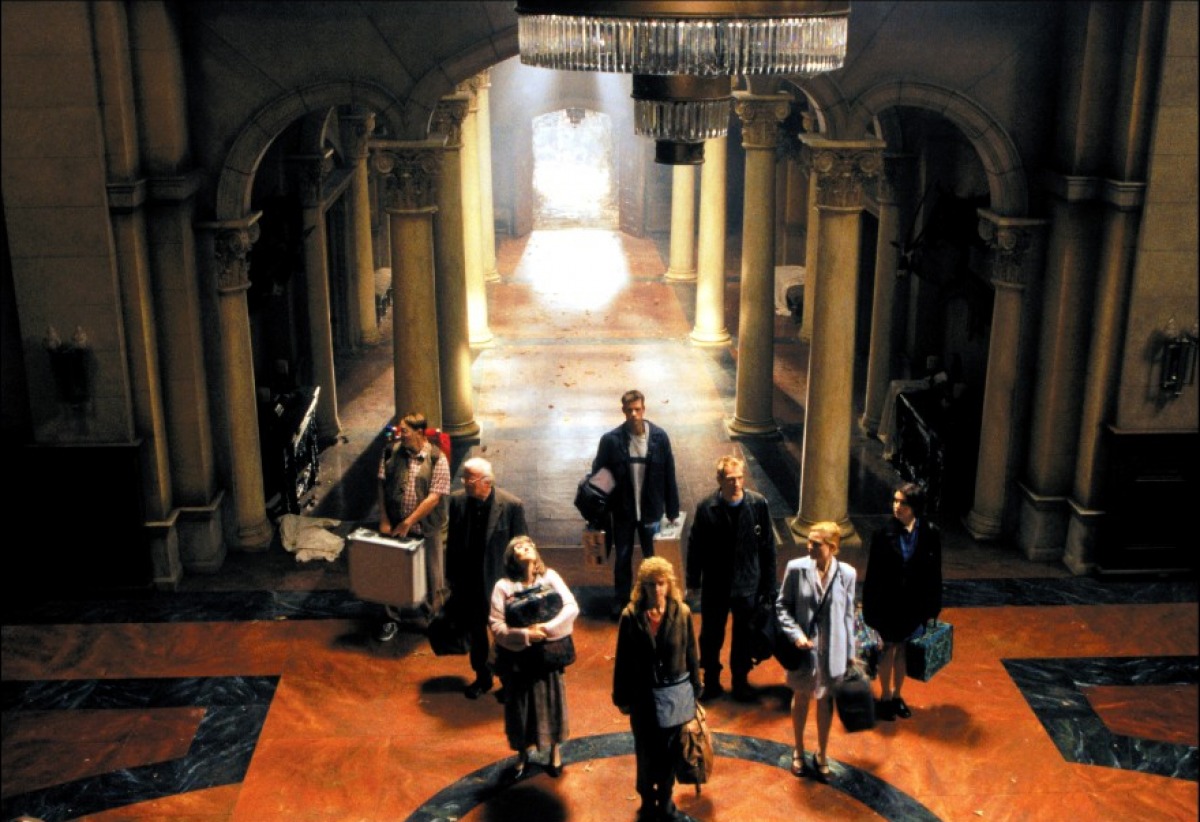 ROSE RED also boasts an incredibly stacked cast. Nancy Travis, Matt Keeslar (The Middleman himself!), Jimmi Simpson, Kevin Tighe, Melanie Lynskey, Matt Ross, Emily Deschanel, David Dukes (in his final performance), Judith Ivey, and Julian Sands are all stellar actors who each get a moment to shine in their own way during the four-and-a-half-hour running time. Tighe and Deschanel aren’t utilized to the best of their abilities, but they at least get a couple of good scenes in, while the rest have a lot of fun with the story.

Ale — what did you think of ROSE RED? What are your thoughts on haunted house stories in general? How do you think this original screenplay matches up with King’s more famous haunted house tale, THE SHINING?

Alejandra Gonzalez: I will admit that I had never even heard of ROSE RED before we took it on, which surprises me because I thought this was excellent. I would say that out of all of the miniseries we’ve covered so far, this one has been the most effectively spooky and delivered some chilling imagery throughout. Sometimes, especially in Part 1, these eerie moments would be coupled with humor that really worked for me and endeared me to the miniseries as a whole. There was one scene where Matt Ross’ character has an exchange with a terrifying apparition and tells the ghost to “save the warnings for someone who’s not broke.” This is a statement he repeats pretty often and, besides heavily identifying with it, I also think we need to put the quote on shirts. The miniseries does a great job at revealing characters this way, so much of who these people are being translated by what they say. That’s true of many films, but ROSE RED provides a perfect glimpse of everyone’s personality with just a few lines. I shouldn’t be surprised that I liked this so much considering that, as you mentioned, it’s directed by Craig R. Baxley, who really impressed me with STORM OF THE CENTURY last week.

As far as my sentiments concerning haunted house stories, they are by far my favorite kind of horror plots. I don’t think I’ve ever seen a haunted house story in which I didn’t find redeeming qualities. Not only is ROSE RED a haunted house story, but it directly and indirectly references some of our favorites before it. I revisited HOUSE ON HAUNTED HILL this weekend and I found the similarities to be undeniable. Lo and behold, Professor Carl Miller (David Dukes) makes a joke asking Joyce if she’s ready to visit “House on Haunted Hill.” In comparison to THE SHINING, I would say I prefer ROSE RED. I know that sounds blasphemous, but something about the Gothic atmosphere in the latter appeals to me more than THE SHINING, which I will admit is a more fresh approach to the haunted house story that borders on possession. What were some of your favorite moments? While I liked most things in this, I would love to see ROSE RED remade — do you think there are things that could use improvement? 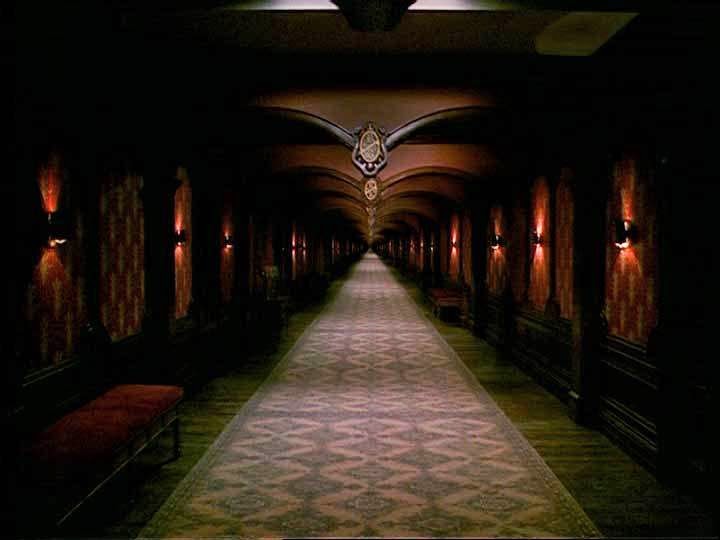 Rob Dean: I definitely see and appreciate the gothic influences in ROSE RED, and prefer them to the architectural stylings of THE SHINING (1997) or HOUSE ON HAUNTED HILL (1999). Both of those sought to ground the haunted house story in a current time with contemporary characters and looks. ROSE RED is a much more retro approach, utilizing weird architecture in a way that recalls something like The Castle of Otranto or some other classic gothic book.

I really enjoyed Matt Ross’ Emery because he was at parts pathetic or shitty, but always felt real and human. Nancy Travis as Joyce is a strongly written character in ROSE RED, as her descent into villainy felt slow, authentic, and truly sinister. This also made me appreciate Julian Sands even more as he was really good as Nick, the psychic who always seemed to be smirking a bit but was ultimately a nice guy. In fact, maybe my favorite part of the entire 4.5 hour runtime is when Nick and Steve (Matt Keeslar) are chatting over eggs and champagne about Steve’s experiences in the house and whether or not they can trust Joyce. The dialogue felt very lived-in and the actors gave the scene a lot of comforting energy where it would be nice to just hang out there. The other elements of praise are, again, the incredible sets that are lavishly built and grounds everything in a tactile reality and the surprisingly creepy practical f/x. A lot of the ghosts/ghouls/corpses have this translucent, silicone flesh that gives off a gross sheen while revealing veins and disused bones underneath. There’s something very unsettling about how these apparitions look that reminds me of that half woman in RETURN OF THE LIVING DEAD or something from POLTERGEIST II.

I think there are two things to update (though both are fairly broad). One, the CGI is crude and never really works. This is ultimately why CGI hampers productions like this, because it always ages badly; practical can be seen as laughable but it at least looks like the same reality as the actors. So much of the CGI for the ghosts or the falling rocks in the beginning looks wonky. Trade it in for in-camera tricks, matte paintings, and miniatures, and there would be a better experience for viewers. The other thing to change is to tighten up that script. For me, the best part of the miniseries is the middle part (Part 2). The first and final entry have their moments, but they also have a lot of filler in them. There’s repetitive moments of people revisiting the house’s past, or showing Annie’s powers, or establishing Joyce and Steve’s relationship (which goes nowhere). Most of that could be excised in favor of more “hangout” moments between the characters to endear them to audiences further.

What about you? What do you think could be changed to improve the effectiveness of the story? Did anything in particular scare or creep you out? Also this miniseries was the first thing King worked on after his unfortunate (and infamous) car accident where he was struck by a van while walking. Does any part of ROSE RED feel different from the King miniseries that came before?

Alejandra Gonzalez: You pretty much noted everything I would have changed to improve the miniseries. I would really love to see this remade today because I think it has such potential to be wildly eerie—especially everything concerning Annie, as nothing is creepier than children. When the effects are as bad as they were here it makes the suspension of disbelief a little more difficult and made me laugh at times when I was supposed to be spooked. It doesn’t really affect how much I liked ROSE RED at all, on the contrary, it makes me curious to see how something I already liked so much could be even better with today’s technology. I think all the miniseries we’ve covered so far kind of suffer in that way, and none of them have been truly effective in giving me the creeps besides SALEM’S LOT. 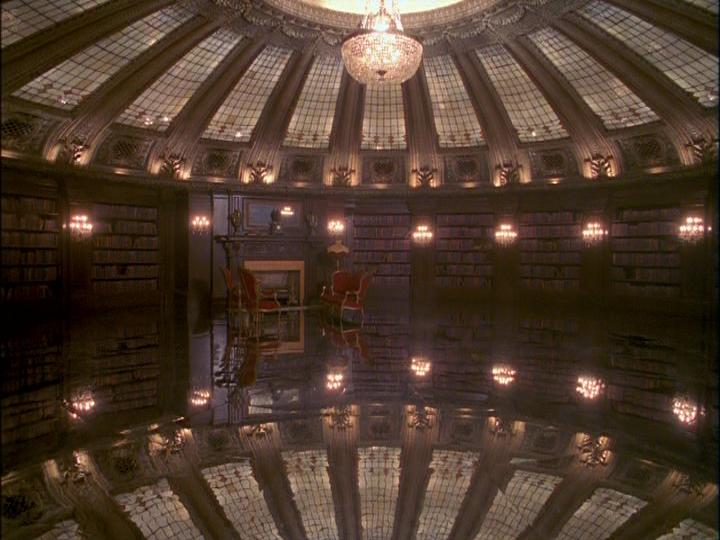 Also, I called Joyce being a little suspect as soon as her boyfriend asked her if she’d still be around if he didn’t own Rose Red and she completely ignored his question. That being said, I can’t say her descent into villainy was very surprising to me, but I agree that it was really effective. It was one of my favorite elements of the story, in fact. I feel like most of the performances were fun to watch, but hers was by far probably my favorite. As far as King patterns go, I instantly noticed this didn’t take place in Maine, or even on the East Coast. Also, did you notice that the mansion was located smack in the middle of a metropolitan area? I don’t know what was up with that. Anyway, I thoroughly enjoyed ROSE RED and I feel positive about this streak we’re on! As of this week, King of All Media will become a bi-weekly column, but I am so excited to cover CARRIE (2002) next!