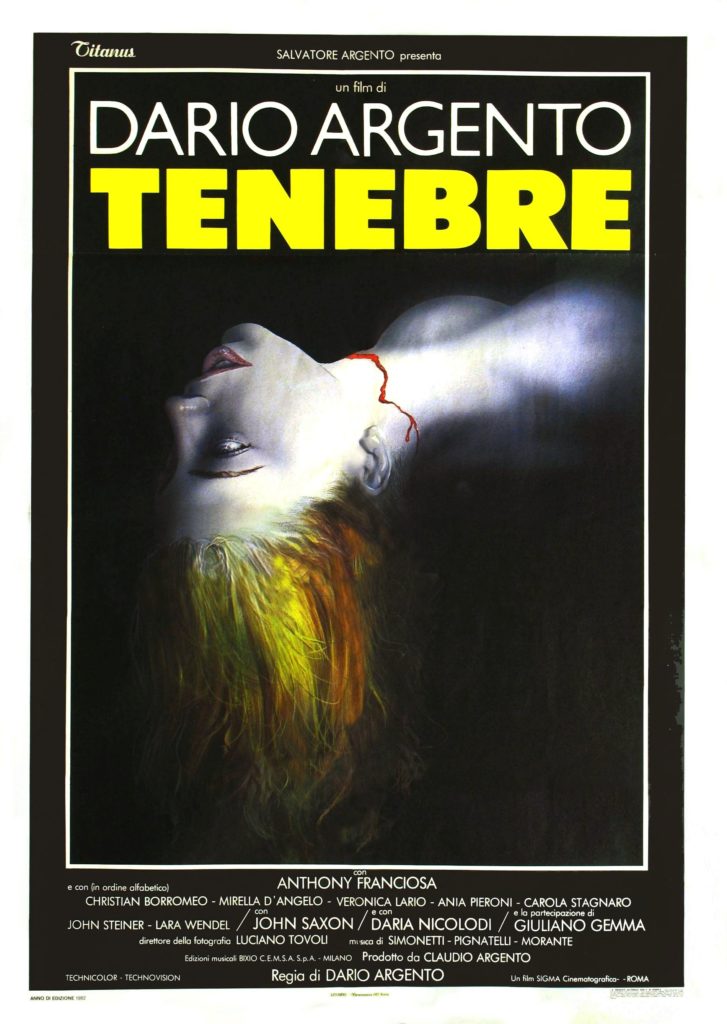 Axe to the gut

Axe to the head

Axe to the back 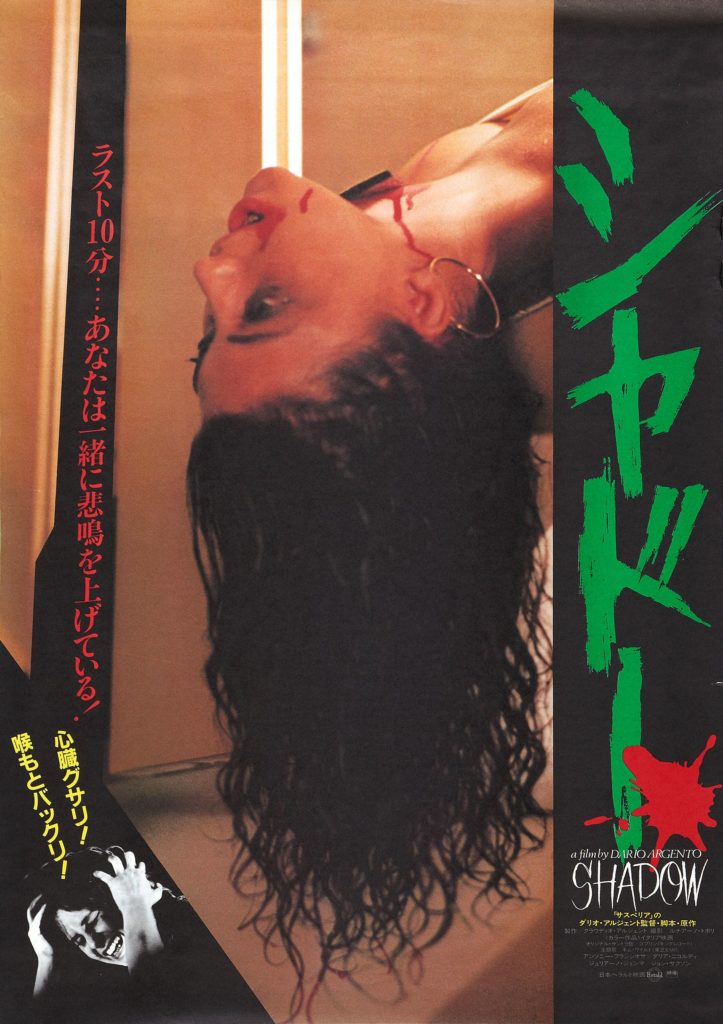 “The impulse had become irresistible. There was only one answer to the fury that tortured him. And so he committed his first act of murder. He had broken the most deep-rooted taboo, and found not guilt, not anxiety or fear, but freedom. Any humiliation which stood in his way could be swept aside by the simple act of annihilation: Murder.” These first lines from Dario Argento’s TENEBRAE set up the entire premise of the 1982 film, one of madness and murder.

In TENEBRAE, Anthony Franciosa stars as Peter Neal, an author plagued by a mysterious, taunting figure using his novels as inspiration for committing a string of gruesome murders in Rome. This film features solid performances from the cast, with a charming Daria Nicolodi and slightly goofy zeal from John Saxon as Neal’s agent. It also has one of the more riveting plots of Argento’s films, and one of the more logical storylines by giallo standards. has some of the most impressive camera work. The murder scenes are deliciously gory and the progressive score by members of Goblin (Claudio Simonetti, Fabio Pignatelli and Massimo Morante) serve as a stylized accompaniment, rife with synths and electronics.

Argento avoids the vivid palettes that typify his `Three Mothers’ films, instead going for blinding white color schemes with the occasional (and deliberate) splash of blood red. It makes sense – the sterile absence of color runs in thematic contrast to the film’s title (meaning darkness or shadows), and supplies a stark contrast to key elements throughout the story. This film marks the second time Argento worked with cinematographer Luciano Tovoli, after his opus SUSPIRIA (1979).

An interesting component of TENEBRAE is it’s self-awareness, particularly on giallo’s representations of women. Not only is there a brief scene involving a reporter drilling Peter Neal on his depictions of women as victims, but the film itself is filled with subtext by way of the killer’s struggles with female empowerment (in one vision of his, she shoves the heel of her phallic stiletto into his mouth), and his method of penetrating her in his fantasies with a lengthy knife. When the killer himself is portrayed as problematic, stark depictions of his misogynistic murder spree become less so. To his credit, Argento executes the deaths of men with just as much intensity and artistic appeal as he does with the women. It all serves the subtext. 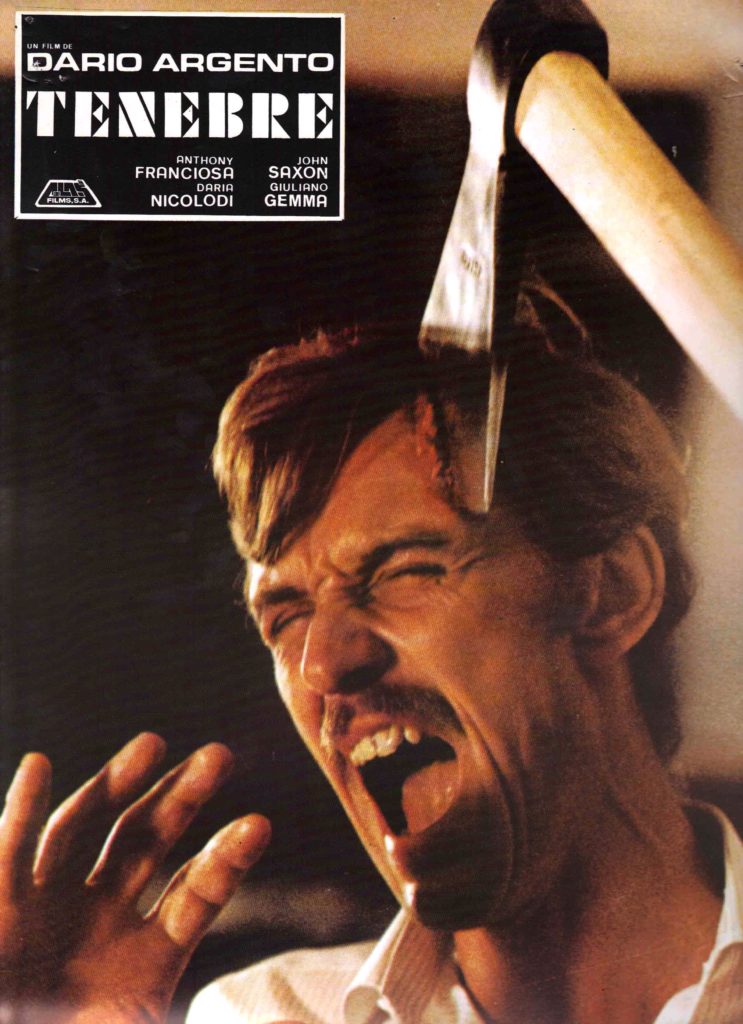 Not only does Argento duly distribute the bloodshed, he brings an artful edge that hearkens back to Mario Bava’s A BAY OF BLOOD in its beauty found in death. As mentioned before, this is a brightly lit movie and so the murders often take place in broad daylight which brings the carnage out of the shadows, a dauntless move in itself. Giovanni Corridori’s effects work is on full display, with notable moments including an ax to the head that is then pulled out with copious blood flow to satisfy the splatter-hounds, and the Argento staple shot of a (female) victim’s slightly severed head crashing through a window. But the standout scene has the audience unable to look away as a woman’s arm is chopped off, and her gushing stump liberally anoints the wall with her blood. It is an over-the-top scene in a film full of startling kills, and it still thrills 35 years later. 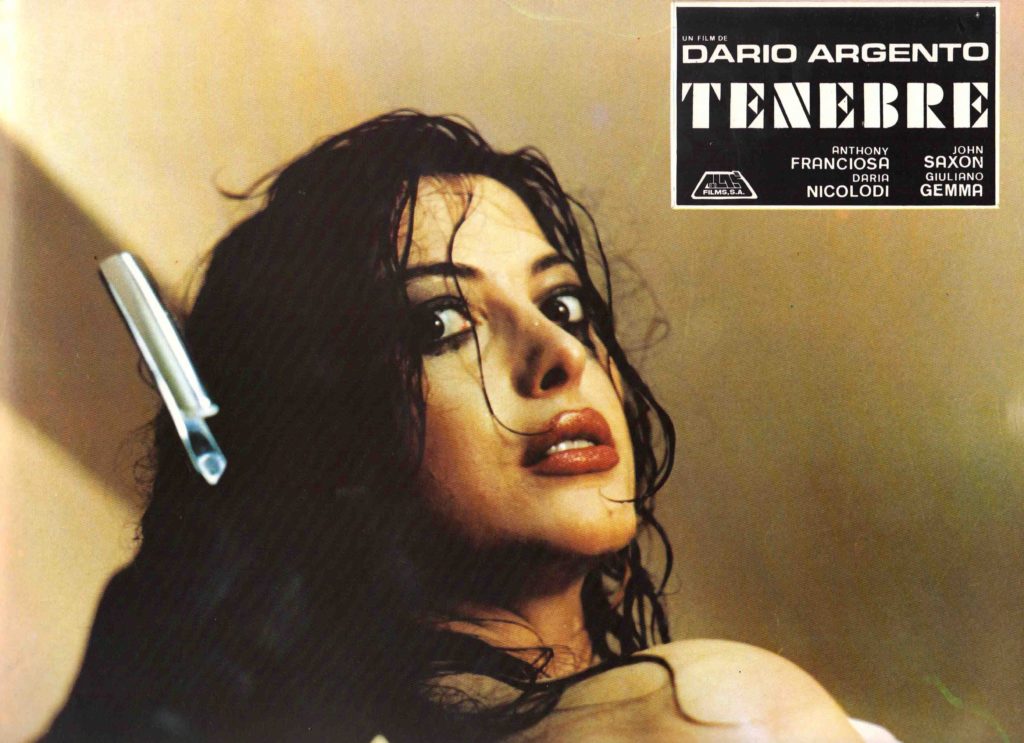 Because his films push the limits of the sensory experience in order to offend, baffle, and inspire awe, the ax-wielding didn’t end on onscreen; in the UK, censors passed the film for cinema, but still hacked away at the sexualized presentation of death scenes prior to its theatrical opening. Under the Video Recordings Act of 1984, TENEBRAE was deemed harmful to audiences and prosecuted under the Obscene Publications Act. The irony here is deafening, given the film’s theme of violent art’s effect upon (and culpability to) society. In 1999, the ban weakened with the movie’s re-release on video with cuts intact. In 2003, the BBFC finally reclassified it and it passed, uncut. In an interesting bit of censorship, the original UK poster for the film, which normally shows an image of a woman with her throat cut, has a red bow placed around her neck. The film is often held up alongside PROFONDO ROSSO (1975) as his bloodiest, and contributed a good deal to his notoriety in both the UK and North America.

TENEBRAE is a true-blue (or yellow) giallo film with all of the lavish flair that Argento has been known to give his works. Since its 1982 release, banning, and revival the film has been reappraised and recognized as less of a sleazy Nasty and more of a thoughtful personal commentary and genre deconstruction. Chilling in tone and striking in its graphic imagery, the film withstands the test of time with ease. 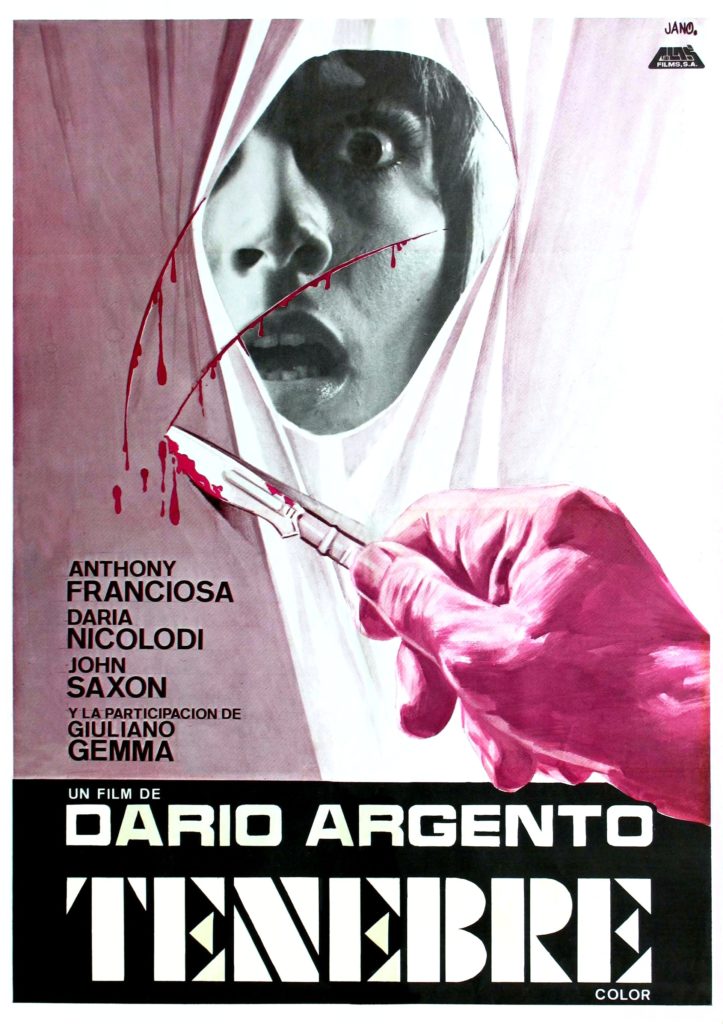