Home  ⁄  The Wire  ⁄  NOW IN LIMITED RELEASE, ‘LUZ’ IS A MESMERIZING DESCENT INTO HELL

The first time I saw LUZ was at Fantastic Fest 2018 and it was a very singular experience. On the one hand, I was completely engaged and enthralled by the film with its retro style, complicated audio design, and unfolding story of demonic possession. But, I had to fight to stay awake as I felt a great pull to succumb to resting my eyes. I never did fall asleep, but I realized that what first time feature writer/director Tilman Singer did so profoundly well is mimic the feeling of a trance. Through a precise deployment of audio and visual cues, LUZ replicated that call for surrender offered by hypnotists, with repetitive sounds and soothing lighting to lower inhibitions and give in to the siren song of some liminal state. Watching the film this time around, I had no such internal struggle, but still remained utterly impressed by what is accomplished in this movie. Working with very little resources, Singer creates a wholly unique story of possession, obsession, loneliness, manipulation, and ultimately self-destruction that is incredibly ambitious and impressively executed.

Luz (Luana Velis) enters a desolate police station late at night. Meanwhile, Dr. Rossini (Jan Bluthardt), a psychotherapist, is enthralled by a mysterious woman’s (Julia Riedler) story about her troubled friend from many years ago. A police officer (Nadja Stübiger) and her translator (Johannes Benecke) are trying to figure out what has happened to Luz when Dr. Rossini arrives to help her recount her evening. Soon a story unfolds of demons, mediums, ghosts of the past, and an ever-shifting sense of power and identity that is unlike anything seen by this precinct before.

With a small cast and small number of locations, it would be easy to see LUZ translate into a play: after all there are many one or few location plays involving power struggles between a handful of actors over the course of a night. However, it is to LUZ‘s incredible advantage to be a film as writer/director Singer takes full advantage of every trick and mesmerizing possibility of the medium. In terms of sound, there are constant mixes of the audio tracks with different languages occurring simultaneously alongside a creeping score full of tonal dread, all while coming from different locations to further establish the lack of a reliable center. The imagery, shot on 16mm like many classic movies or even industrial films, begins as very drab and dull (a compliant banal office space that looks more akin to a place for human resources conferences than police interrogations), with splashes of neon utilitarian of ’80s Germany (evoking films like Besson’s SUBWAY or Fassbinder’s WORLD ON A WIRE), until the thin veil of reality begins blurring between past and present, dreams and nightmares, as the demonic presence grows.

Singer is able to utilize these tenets of filmmaking—sound, imagery (lighting, color, etc.), cross cutting between scenes with competing emotions, impressively precise blocking and match cutting that adds to muddying the waters of that sense of loss of boundaries—to truly invoke a unique experience of troubling mystery that pairs well with the themes explored within the story of Luz and the demon that has longed for her for years. Velis is absolutely astounding as Luz—as the conduit for much of the story, she has to play Luz as playing (or recounting) these other characters, giving each “voice” a distinct physicality and tone that suggests a real split in personalities. Also, her ability to recreate movements precisely in different locations to re-enact scenes is truly impressive. At first, Luz is a bit of a cipher in her own story—the audience uncertain what type of person with whom they are dealing or what she is going through. But soon the script and actress create a full person that is flawed, angry, hurt, defiant, strong, sad, and perhaps in way out of her depth against forces she can’t truly understand. Bluthardt also turns in an excellent performance in his own chameleon way from drunken lout, to seductress, to manipulative monster, as his composed professional face slowly melts away.

LUZ is an exceptional movie. The fact that it’s Singer’s debut feature film (made for his thesis for school, no less) is astounding. The lack of resources may be apparent to more nitpicky audiences, or a detraction to those looking for bigger set pieces, but ultimately it all serves this contained, smaller story about the corruption of one woman’s soul once it enters the crosshairs of an unrelenting evil. There are certainly glimmers of other films before it—LAST SHIFT, LET US PREY, BLOW UP, POSSESSION, the works of Dick Maas and Dario Argento, amongst others—but it remains a fairly unique piece that casts a strong spell on viewers who will marvel at the labyrinthine story told in such a particular and inventive manner. 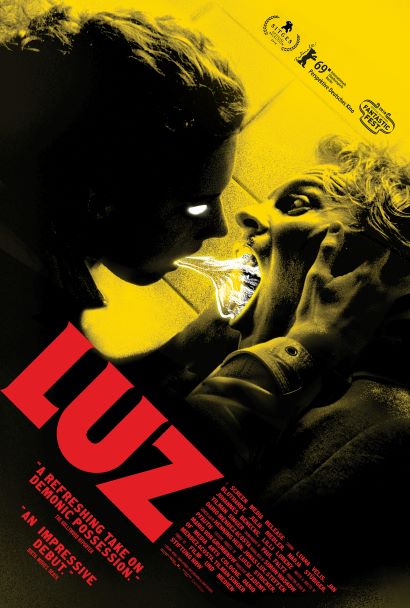