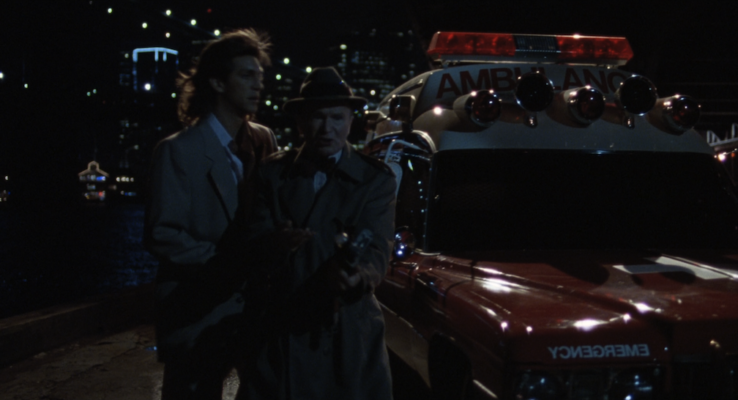 There’s a little bit of Sam Fuller in Elias. As a classic newsman of a certain vintage, it is easy to see him as being a little behind the times but you have to love how he practically salivates at the pulpy story that lands at the foot of his hospital bed. Elias betrays a certain kind of tabloid meets gossip meets hard-nosed journalistic ideation that went out of mainstream style around the same time that Fuller was applying it to his films in the ’50s. But that is what makes Elias (played by a perfectly cast Red Buttons) such a fun character and such an effective ally/sidekick to the film’s put upon hero: he’s a scrappy underdog precisely because he more or less wrote himself to be one. Like all good writers, he found a unique angle for his own life story and if it happens to make him look like an unlikely hero, so much the better. 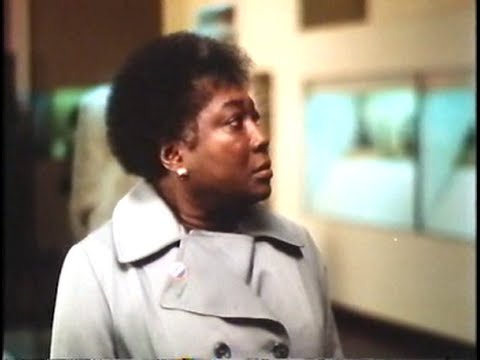 I find it a shame that we never got at least a season of a TV show about Momma Sykes (Esther Rolle) solving murders. While dated, SEE CHINA AND DIE works very well as a stand-alone TV movie, but it is easy to see how the concept could have translated to a weekly series. Most of this promise comes from the lead character of Momma Sykes and her warm personality, genuine sense of humor, and surprisingly clear-eyed views on the class and racial barriers that separate her from the wealthy people she serves as housekeeper for. I have a feeling that last bit of the character is what scared off the network suits from greenlighting the pilot to series. Interesting to note that only a couple of years later, a very similar concept took off with a completely nonthreatening protagonist who was not weighed down by the occasional ugly realities of life in Murder, She Wrote. 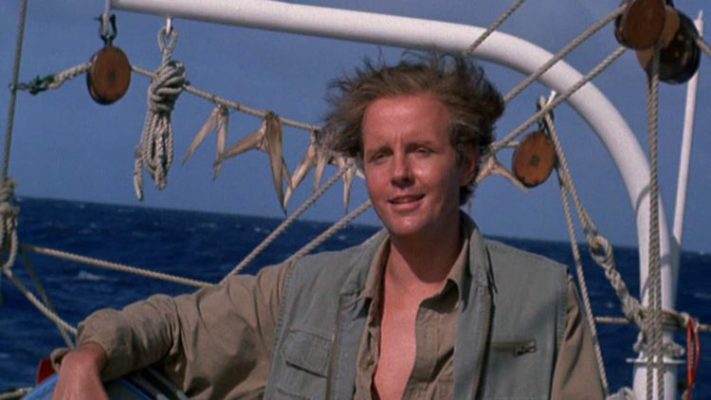 I’m not about to argue that ISLAND OF THE ALIVE is a good film. It certainly isn’t as good as IT LIVES AGAIN, and honestly should not be mentioned in the same breath as the damn near perfect IT’S ALIVE. But it is a fun film—especially if you are able to view it as unrelated to the first two films in the series. Thankfully, Cohen sets it up to almost work as a standalone film by introducing a new protagonist in Stephen Jarvis (Michael Moriarty) who handles being the father of one of the mutant babies in a way that is the complete opposite of the first two films’ Frank Davis (John P. Ryan). Jarvis turns himself into a buffoonish clown to protect his child and other mutant babies when scientists want to invade the island where they have been living peacefully for over five years. Moriarty uses the much cannier than he seems Jarvis to play up a goofy, smirking persona (that covers up a lot of internal demons) that includes singing sea shanties at the top of his lungs while an unfortunate scientist throws up from sea sickness. Yeah, it’s that kind of movie.

Lieutenant Perkins (James Dixon) has the distinction of being the only character to appear in all three of the IT’S ALIVE films. Transforming from the confused, yet empathetic cop in charge of tracking down the Davis Baby in the first film to reluctant burn out forced to track down three babies in the second film to the de facto sidekick to Moriarty’s Jarvis in the third film as he tries to help find a way to protect the mutant babies he spent so much of his life hunting down, Perkins’ motivations mirror the tones of the films as they evolve over the years. In many ways, although he physically escapes the films largely unscathed, he is just as emotionally damaged by the horrific events of the films as anyone directly related to the babies or those they killed. 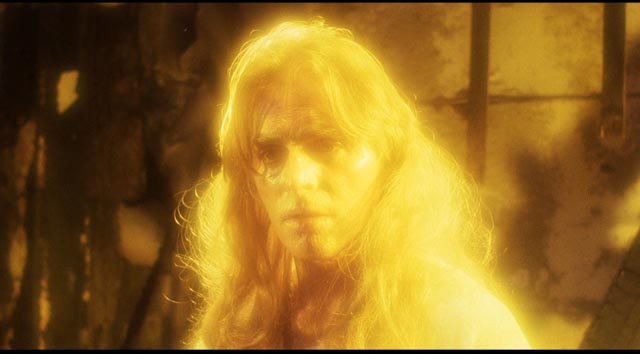 The alien/god behind the wave of murders terrorizing New York City in GOD TOLD ME TO does not get much screen time, but Bernard Phillips (Richard Lynch) makes maximum impact as easily the most controversial and internally confused villain in any Cohen film. Taking on a human form that resembles the popularly circulated image of Jesus Christ with a white robe and long blonde hair, Phillips confuses his alien nature with being that of a god come to Earth, but his arrogance and Old Testament style of instilling obedience through fear and manipulation makes him too truly frightening to be loved by anyone—even his own tortured brother. If he weren’t so damn frightening, he’d almost be pitiable. 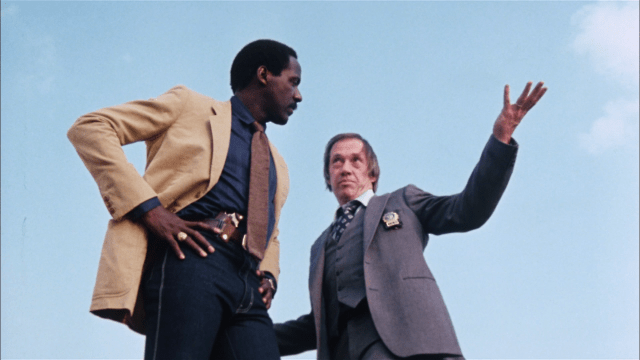 I’ve watched enough Larry Cohen movies to know that it can’t be easy to play the straight man to Michael Moriarty. Factor in that Det. Shepard (David Carradine) has to also have scenes stolen from him by a flying plumed serpent, and you have a recipe for a character to basically disappear into the background. Instead, Carradine brings something weirdly sinister to his basically straight-arrow cop that makes him both untrustworthy and fun to watch when he gets some rare screen time out of the shadow of Moriarty and the monster. There’s no real hero in Q and while Shepard comes the closest to being one, the sadistic grin he wears as he sends waves of unnamed uniform cops to their deaths in the climactic battle with the monster suggests something deeply unhinged about the man that makes him a much stronger character than he has any right to be. 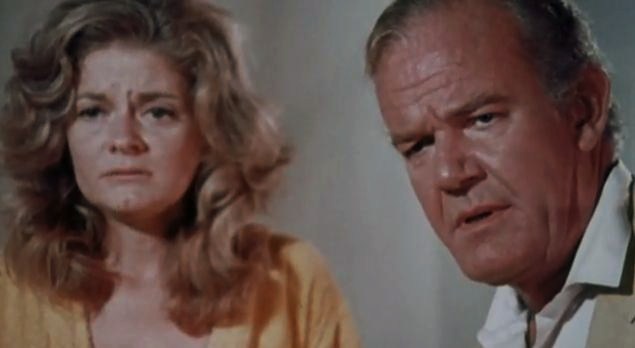 Bill (Andrew Duggan) is actually the least interesting of the trio of leads in BONE, but that is far from an insult when the ensemble of characters and performances is as strong across the board as they are in in the film. In a movie full of surreal twists and turns that border on magical realism, it is Bill–ever the pragmatic realist (except when it comes to his finances)—who has the experience that feels most like a waking dream as he drifts through a landscape that is at once familiar, but off-kilter in the people who occupy it and the things they demand of him. The movie opens with an anxiety nightmare he is having and for all intents and purposes, he just trades one nightmare in for another. Watching his privileged status erode to the point where he is literally begging for his life is satisfying, funny, and very unnerving. 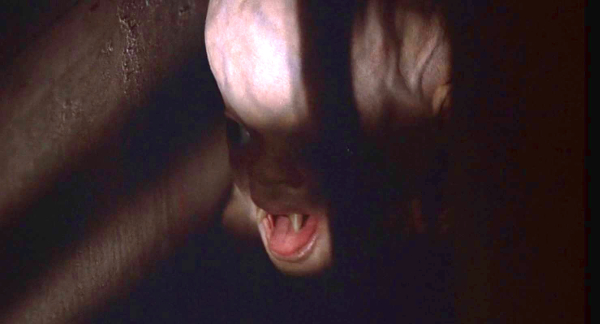 The Davis Baby never asked to be born the way it was. Evolution, at times, can be a real bitch, and the side effects of an abrupt evolutionary jump for human beings to live in an increasingly hostile world (created by our own pollutants and pharmaceutical dependence) turns out to be sharp claws and teeth, altered vision, a telepathic homing instinct to family, and the survival instincts of a cornered grizzly bear. While he kills his way across Los Angeles (worth noting: he only kills when frightened or threatened), the Davis Baby only has one guiding motivation, to be reunited with his parents, even if his own father has disowned him out of shame and wants to kill him. The Davis Baby is a Frankenstein’s Monster for a new age: sympathetic, deadly when angered, and desperately in need of the love of his creator to stop the madness. He absolutely breaks my heart. 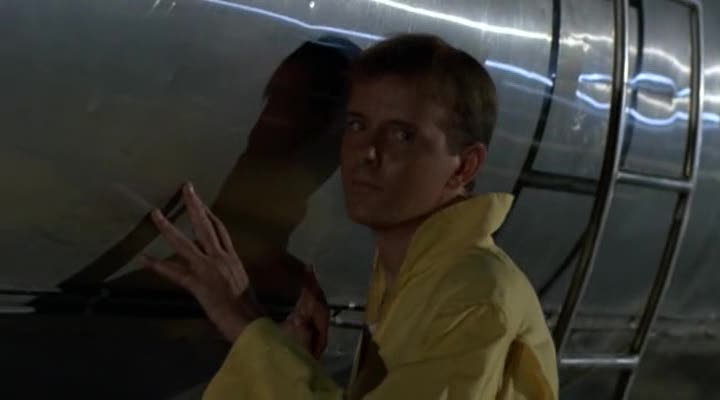 With that one line of dialogue, corporate saboteur Mo Rutherford (Michael Moriarty) summed himself up rather nicely and became one of Larry Cohen’s most quotable characters (to this day, I still have to stop myself from saying “That’s a sweaty palm” whenever I shake someone’s hand). But Mo is one of Cohen’s more slippery heroes. We know next to nothing about Mo other than he used to be in the FBI and the immoral business practices of the company behind The Stuff is blatantly evil enough for him to decide to take them down. But the corporate espionage business is a very dirty one. For all any of us know, Mo could have been the villain in a thousand other stories. That nagging suspicion in the back of the mind keeps Mo from being entirely trustworthy—Moriarty’s mega-charming performance aside—and makes him a deeper character than he appears to be. 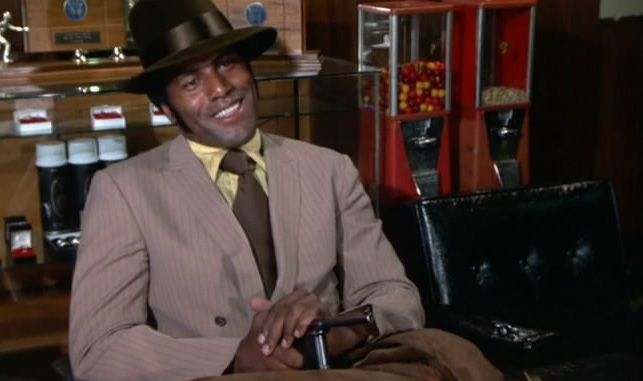 If not for a few trappings of the Blaxploitation genre, Tommy Gibbs could have stepped right off the set of a ’30s Warner Bros. gangster melodrama, but that is what is so appealing about him as a character. As played by a never better (in BLACK CAESAR, at least) Fred Williamson, Tommy’s rise as a criminal is understandable as the demons of racism drive him, but his eventual fall, driven by greed, hubris, and jealousy leads him to be as bad as (if not worse than) the killers and crooked cops who fed his hatred in the first place. It is a classic arc that Cohen and Williamson play for keeps, letting Tommy go from gangster with a code of sorts to absolute villain. It is unfortunate that they unraveled much of what made Tommy fascinating with the unnecessary sequel HELL UP IN HARLEM. Trying to turn Tommy into an antihero was a terrible idea and while that film has its moments, its greatest strength is making you appreciate how well drawn Tommy is in BLACK CAESAR.