Home  ⁄  The Wire  ⁄  [Lost In The Gutters] ‘TANK GIRL’ Embraced Its Comic Origins, For Good And Ill 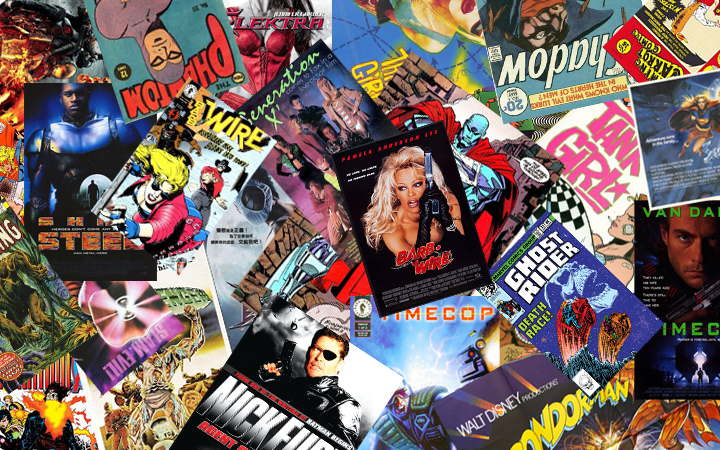 The ‘90s were a strange time for comic book fans. Despite experiencing mainstream success in the publishing world and other media, twin titans DC and Marvel had trouble figuring out the leap to movies for most of the decade. With the notable exception of Batman, most characters’ silver screen exploits languished in the rumors section of Wizard Magazine and in the elaborately-detailed fantasies of fan-casting. (Full disclosure: I was absolutely convinced that Jean-Claude Van Damme would play Gambit in an X-MEN movie.) However, Hollywood had no trouble mining the increasingly prolific ranks of independent comics hailing from outside of the DC-Marvel domain. Where the past 20 years have felt somewhat monolithic as DC and Marvel have jockeyed for dominance, the ’90s flourished with plenty of weird, wild efforts, some of which were ahead of their time in unabashedly embracing what it meant to be a comic book movie. 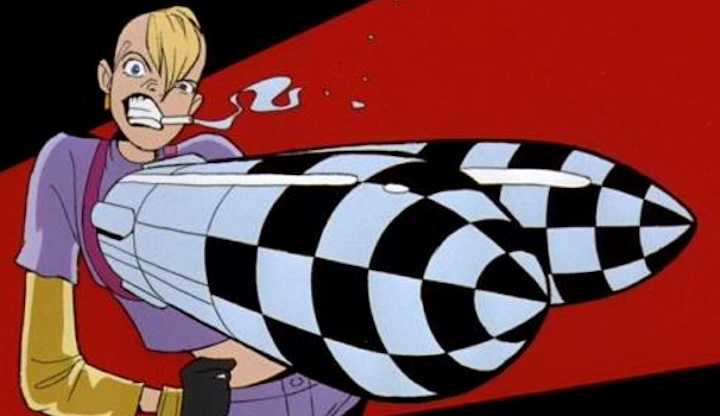 Tedi Sarafian’s script does frame the comic’s shaggy, episodic narrative in conventional Hollywood blockbuster terms, though, by having Tank Girl do battle with Water & Power, a cabal of old white men looking to monopolize the world’s scarce water supply at the behest of the maniacal Kesslee (Malcolm McDowell). (For comparison’s sake, one of the comic’s plot lines involves Tank Girl’s failed attempt to deliver colostomy bags to President Paul Hogan, though I like to think there’s an alternate universe out there where that was the plot of TANK GIRL 2.) 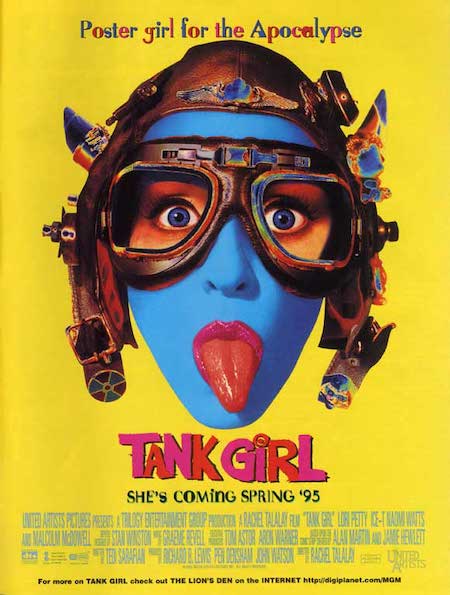 But despite this somewhat conventional framing—which also gives Tank Girl a personal motivation after W&P blows away her boyfriend and abducts her young friend (Stacy Linn Ramsower)—the spirit of the original comics lurks in the manic, chaotic energy. TANK GIRL rarely relents in its impish, hyperactive approach that often manages to capture the comic’s sheer anarchy. It turbocharges through absolute nonsense without flinching when Tank Girl befriends a group of underground-dwelling mutant kangaroos (including Ice-T!). Likewise, she puts on a song-and-dance routine after infiltrating a brothel, where she also fends off a pedophile named Rat Face (Iggy Pop). For most of these exploits, she teams up with Jet Girl (Naomi Watts), a brilliant mechanic who defects from W&P to join Tank Girl’s ragtag resistance. TANK GIRL just feels like a lot of movie, and its devil-may-care attitude about flinging so much at its audience can be exhilarating or exhausting, depending upon your persuasion.

If it’s your persuasion to indulge this nonsense, you’ll also find that TANK GIRL rules in that very specific way that even the most middling ’90s action movies rule. While some often dismiss a lot of this era’s output as sheer spectacle, most of its blockbusters earn that title at least because they remain a sight to behold. TANK GIRL is a marvel of grungy, patchwork, steampunk production design and comes alive with a palpable, gritty texture that’s missing from a lot of its contemporary analogues. 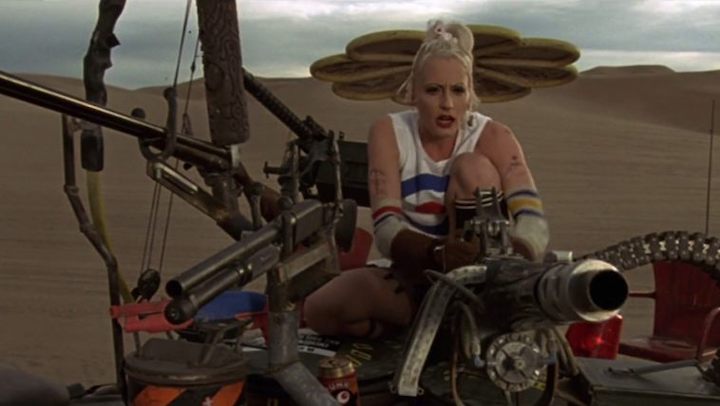 It carries that bombast of ’90s action films, meaning there’s a slight element of danger and awe as you watch these actors (and their stunt doubles) navigate sequences full of actual fire and squibs. If nothing else, TANK GIRL is a reminder that even something like this had a tangible sense of physicality and weight behind it. We should be grateful for what CGI has been able to bring to theater screens, but it must be said that it’s also ushered in an era of weightless, pseudo-cartoons that just don’t feel quite the same.

TANK GIRL only feels like a cartoon in the way it should because it dares to embrace its comic book roots, right down to incorporating animated interludes from the original artists. Production designer Catherine Hardwicke envisions a bold, vivid world that feels imported straight from Martin and Hewlett’s panels. It’s positively garish, even, full of loud colors and brash visuals to match the film’s outlandish spirit and plot.

Stan Winston designed the Rippers (those kangaroo/man hybrids) but their execution and those of the other effects, quite frankly, don’t quite work but are distinct and weird as hell…much like TANK GIRL as a whole. You might not like it, you might not even respect it, but it’s very much a singular experience, doubly so once Talalay co-opts the implicit feminist undertones and turns TANK GIRL into a ’90s riot grrrl time capsule, complete with a rad soundtrack boasting the likes of Hole, L7, and Veruca Salt. 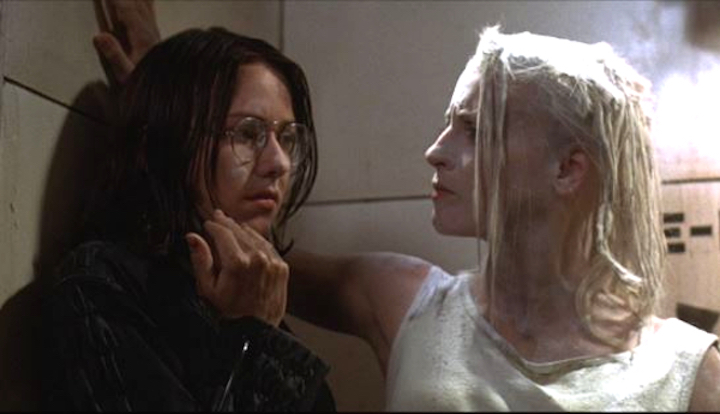 Petty is obviously instrumental here, as she embodies the title character with such boldness that it’s difficult to imagine anyone else taking on the role (though I suppose I’m not gonna bet against Margot Robbie, who’s currently due to give it a shot). She’s on the exact wavelength she needs to be, landing somewhere between Looney Tunes and tomboy MAD MAX as she blisters through the proceedings. Something like TANK GIRL could have easily degenerated into a campy, ironic farce, but Petty keeps it grounded just enough with an infectious performance that’s having fun with the movie instead of having it at its expense.

Her supporting cast is similarly having a lot of fun, with perhaps the notable exception of Ice-T, whose bewilderment (and possible disdain) is evident even beneath the ridiculous makeup that turns him into a kangaroo (with dreadlocks, of course). Watts is an especially solid counterbalance to Petty’s frenzied turn as Jet Girl, whose demure disposition provides a bit of a contrast. McDowell, of course, is all too eager to devour the scenery as Kesslee, an unrepentant asshole surrounded by a colorful assortment of lackeys and goons (including James Hong and Don Harvey). There’s rarely a dull moment with this many fun performers just itching to cut loose, but I wouldn’t begrudge anyone who finds its breathless, irreverent energy to be a little grueling. 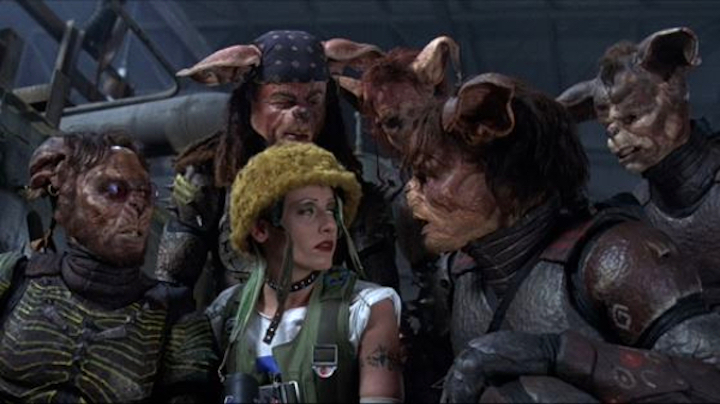 By the time you see a bunch of mutant kangaroos dry-humping Petty and Watts, it starts to feel like a little too much, and there’s still a fair amount of TANK GIRL left at this point. It does feel like an assault on the senses, delivered with the unmistakable pitch of juvenile provocation. Most contemporary audiences and critics agreed, and TANK GIRL is still remembered as an infamous box office bomb that torpedoed Talalay’s studio movie career. She’s rebounded as one of the industry’s most reliable TV directors in the decades since, but stuff like TANK GIRL, FREDDY’S DEAD, and GHOST IN THE MACHINE reveal the imagination of a filmmaker who deserves another shot at something on this scale.

Talalay at least had a vision to bring a comic book to the screen in a brash, indelible in an era that just wasn’t quite ready for it. Similarly lurid productions like BARB WIRE, BATMAN & ROBIN, JUDGE DREDD, and SPAWN live in such infamy, albeit for varying reasons. But it can’t be denied that even these films are worthwhile in the way they just go for it. Compare it to the muted, “grounded” approach of Bryan Singer’s X-MEN and even Christopher Nolan’s DARK KNIGHT trilogy; while it’s true that these films (along with BLADE and Raimi’s SPIDER-MAN trilogy) were instrumental in paving the way for comic book films to flourish, I’d like to think we’re in a place now where we can appreciate those deranged, candy-colored efforts from the ’90s that at least tried to transport viewers to entirely different worlds. Maybe that means you sometimes ended up in a world where it’s implied Lori Petty is having sex with a mutant kangaroo, but that’s just the price we had to pay.