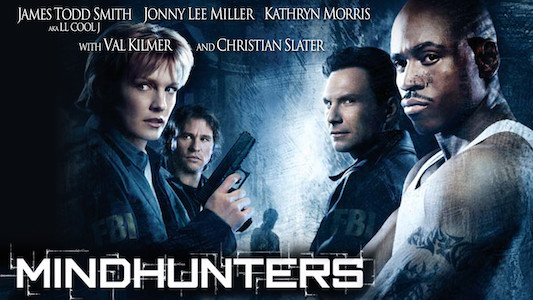 Here is my immodest proposal: Renny Harlin, the director of MINDHUNTERS, deserves a reappraisal.

It’s always a curious thing to watch art/artists get reassessed. When it’s something that was once applauded only to now fall out of favor, it’s usually due to changing cultural norms, recognizing perpetuation of negative concepts or depictions, or some element of inauthenticity about the work…or some sort of heinous act committed by, and/or pending criminal charges for, the artist.

When something once discarded or shat upon by many is re-examined and found to have merit, that’s usually because the original work was ahead of its time and audiences weren’t ready for it, or it was overshadowed by something when it came out, or there’s a strong nostalgic pull for people who grew up with it.

Positive reappraisal in film often coincides with the titles being cult movies. That term has been fairly sullied in the past decades or so as publicists, critics, and audiences seem to want to declare something a “future cult classic.” But that’s not how it works. Yes, most cult movies are quirky and odd in ways that aren’t always easy to pinpoint—but it’s not a definition that can be applied until years have gone by and people are still discovering, watching, discussing, and enjoying the cinematic oddball.

Cult movies are usually comprised of failures—they never made a lot of money, or they were generally seen as bad, or they were never marquee titles, or they were made without a lot of technical polish so as to never be taken seriously as a “real film.” This group includes midnighters filled with weird ideas and gross visuals; b-movies that were afterthoughts for studios but found extended life on cable or home video; “terrible” movies that are ineptly made or have nonsensical/incredibly high concept plots, and the like. 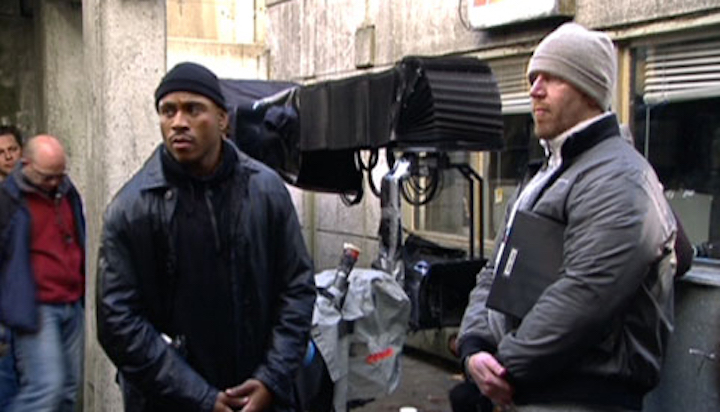 Most of Renny Harlin’s filmography is a mix of titles that fit those categories of cult movies and those that don’t. PRISON (1987), THE ADVENTURES OF FORD FAIRLANE, CUTTHROAT ISLAND, THE LONG KISS GOODNIGHT, and (the film we’re here to discuss) MINDHUNTERS check off a lot of those boxes previously mentioned above. But he also made blockbusters that were fairly well received—A NIGHTMARE ON ELM STREET 4: THE DREAM MASTER, DIE HARD 2, and CLIFFHANGER. (DEEP BLUE SEA kind of has it both ways—it’s goofy with many outrageous scenes, but was financially successful with most people at the time recognizing it as over-the-top fun.) 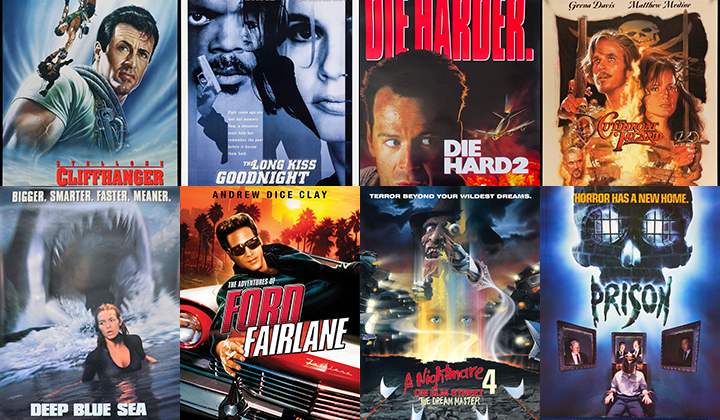 Harlin has been pushed aside in favor of other contemporary filmmakers working in similar genres (hell, even within the same franchise). And yet that list above is a pretty impressive and eclectic mix that has been met with derision, more often than not. Because, while everyone loves an underdog, that impulse is often at odds with a human tendency (amplified in the age of social media) to target something subjective as objectively bad and then collectively people conform to that view. That’s an odd dichotomy at work in the human mind. Which is a perfect segue into MINDHUNTERS—a movie about psychology, about people’s behavioral strengths and weaknesses while also a film with the duality of being both incredibly dumb and fairly ingenious.

MINDHUNTERS concerns a group training to be FBI profilers under the tutelage of Jake Harris (Val Kilmer). Harris is a loose cannon instructor who creates bizarre scenarios and field exercises that force his pupils to get into the heads of the psychopathic criminals they hope to hunt. This ragtag group of wannabe mindhunters include Bobby (Eion Bailey), Rafe (Will Kemp), J.D. (Christian Slater), Nicole (Patricia Velasquez), Lucas (“Zero Cool” himself, Jonny Lee Miller), Vince (Clifton Collins, Jr.), and Sara (Kathryn Morris)—all of whom are competing to move on to be active profilers, though Harris’ high expectations and tough demands may mean that more than a few will wash out.

Well good news for those feeling like they are on the bubble—as they are heading off to a remote island usually used for police training exercises to essentially LARP as real profilers on the hunt for a puppet master like sociopath who is killing people (mannequins) all across this small piece of land and leaving clues for his would-be captors. While Harris departs to monitor their progress, they are joined by an unexpected outsider in Gabe Jensen (LL Cool J), a supposed Philadelphia cop there to just observe and not participate in the exercise. Soon though, it all goes off the rails and people are killed in spectacular fashions. Yes, the training game…is for real.

MINDHUNTERS’ script was written by Wayne Kramer (THE COOLER, RUNNING SCARED), though it was originally called UNSUB (for “Unknown Subject,” a term that profilers use)—but that’s an awful title. Kramer allegedly didn’t want to use “mindhunters” as there was already a book called Mindhunter about FBI profilers (that would eventually form the basis of the Netflix show). The film is essentially Agatha Christie’s And Then There Were None, plus elements of the mid-to-late ‘90s serial killer profiling craze (SILENCE OF THE LAMBS, COPYCAT, KISS THE GIRLS), all by the way of SAW. Except…SAW wasn’t out before the film was made.

Here we get to the asterisks surrounding MINDHUNTERS’ 15th* anniversary. Production began on the film in January 2002 and Harlin shot MINDHUNTERS from February 2002 to May 2002 (odd sidenote—Harlin was going to make A SOUND OF THUNDER but bailed for this project, leaving that in the capable/culpable hands of Uwe Boll). This was around the time that James Wan and Leigh Whannell were circulating their script for SAW, along with their short proof-of-concept film. SAW was eventually made and released in 2004, while MINDHUNTERS was supposed to be released soon after its production wrapped in 2002.

But…it wasn’t. MINDHUNTERS wouldn’t play in the vast majority of the world until 2004…except for the United States. The movie wouldn’t open in the U.S. until May 2005—by which point MINDHUNTERS had already come out in Kazakhstan, Lithuania, and Indonesia, and was already on DVD in Norway, Sweden, and Hungary. (There must have been some theatrical release clause or else Dimension Films would’ve just thrown it to home video—basically, I’m saying MINDHUNTERS is the NEW MUTANTS of the early ‘00s) The delayed release also meant that by the time Harlin’s film was seen by American audiences, they had already watched a killer design elaborate traps that ended in grisly murder. 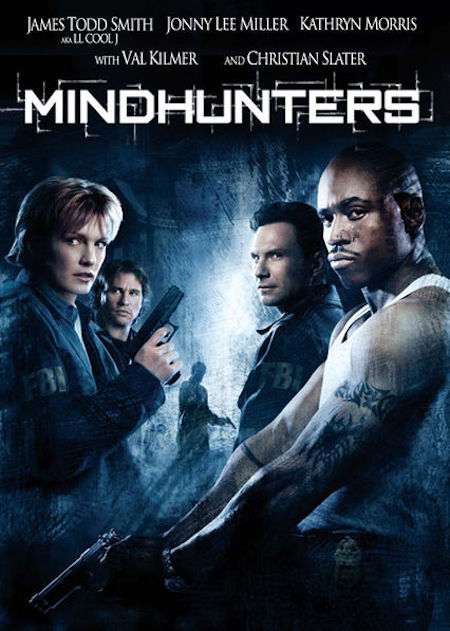 Of course, MINDHUNTERS being seen by many as an also-ran after SAW isn’t fair for a variety of reasons. But chief among them is that MINDHUNTERS is actually fun (where SAW isn’t). Much like DEEP BLUE SEA, there are outrageous sequences, bizarre attempts at cool guy quips, and feigned hand motions towards involving real science or factual elements to the insanity on hand. It is hard to know if Harlin thought all of this was really cool, or if he was lampooning the over-the-top machismo of the grimdark actioner (or maybe both?). The film attempts to create troubled backstories that allow for a lot of misdirection of suspicion while also revealing that the killer is using the weaknesses of everyone on the island against them. 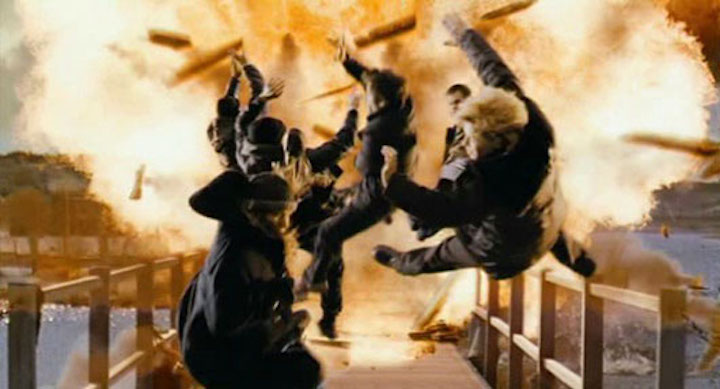 Someone has an addictive personality, someone always has to be first through the door, someone always has to show off their vast intelligence—these are character traits (or weaknesses) that the killer utilizes to target and take out these would be profilers (which of course means that the killer is a very good profiler themselves). This emphasis on “weaknesses” leads to one of the greatest one-liners of all time said after shooting the villain at the film’s climax (which you can watch here if you wish to be spoiled), but it’s also another example of a “smart or stupid?” aspect that MINDHUNTERS employs inconsistently but to great effect.

MINDHUNTERS is cheesy and schlocky because it’s played totally straight. Harlin’s movie is also incredibly produced as it was mostly shot on an actual island used almost exclusively for police training. Then they filled up the ghost town with a bunch of creepy mannequins (and far too many stray cats), and added insane action sequences featuring a great mixture of impressive practical f/x and really poorly rendered CGI.

I’ve skirted around the plot details and intentionally not spoiled the ending of MINDHUNTERS because I know most people haven’t seen it. But you should—it is hilarious and cool and exciting. You can appreciate it as a “good bad movie” or as a clever update on Christie’s formula. No matter how you slice it, MINDHUNTERS is entertaining. It’s another film in Renny Harlin’s impressive and odd career that is worth a watch (or a second look), and another reason why Harlin is overdue for a reappraisal of his work.