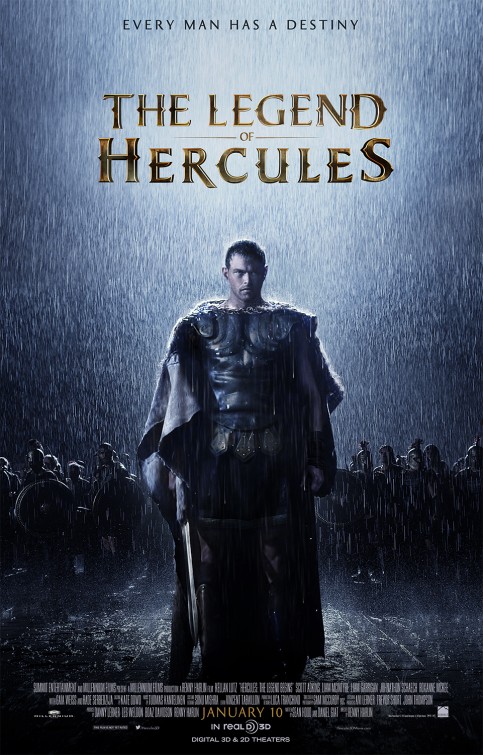 We love Renny Harlin here. Some of the films he directed are PRISON, A NIGHTMARE ON ELM STREET 4, THE ADVENTURES OF FORD FAIRLANE, DIE HARD 2, CLIFFHANGER, THE LONG KISS GOODNIGHT, and DEEP BLUE SEA.

He makes vigorous, humorous, attractive action cinema, and he has gotten great work out of many of the most talented action cinematographers around (i.e. Oliver Wood, Alex Thomson, Guillermo Navarro). On THE LEGEND OF HERCULES, Renny has Sam McCurdy, who shot the highly entertaining CENTURION for Neil Marshall. Like CENTURION, THE LEGEND OF HERCULES is an energetic patchwork of inspirations — a little GLADIATOR here, a bunch of THUNDERDOME there, a surprising amount of ROBIN HOOD: PRINCE OF THIEVES, even a sprinkle of BATMAN by the end. The title character is played by Kellan Lutz, best known for some role in the TWILIGHT movies (I can’t help you there), who has been a substantial enough physical presence in little-known movies like ARENA and JAVA HEAT but who is also kind of hilarious. He’s more Disney’s Hercules than Steve Reeves — it’s not totally clear if Kellan Lutz can even grow a beard.

Like the Steve Reeves movies, though, this HERCULES is an actual B-picture in the classical sense of the term: a genre effort by a top-flight director with second-tier stars. One of them won’t be second-tier for long: I’m a big fan of Scott Adkins, the stuntman and rising action star who plays the snarling villain in this flick. He’s a lot of fun here, barking and hollering at Kellan Lutz’s Hercules while Lutz, reliably under-expressive, just kind of smirks back. More importantly, and as can be expected from a Renny Harlin film, the action scenes enliven the picture. This time out, there’s a little too much CGI and speed-ramping in the mix, but there’s still some good stuff to see, such as an epic nighttime battle in the rain. My favorite bits were Hercules’ battle with a lion the size of an elephant, and the celestial sex scene where a woman has intercourse with a god. Considering this is a PG-13, there’s actually more unusual love-making than most R-rated action movies these days. Look, I know it’s not for everyone, but I had fun with THE LEGEND OF HERCULES in the theater and you’ll probably have fun with it at home.