I finally got to see THE VOID last night! I’m not going to review it, since Patrick Smith did that here — also, click here to read what happened when Jason Coffman and Mike Vanderbilt interviewed the creative team behind THE VOID. Since these are the same maniacs who brought us MANBORG, I thought it might be interesting to revisit what I wrote a few years ago about their earlier work… 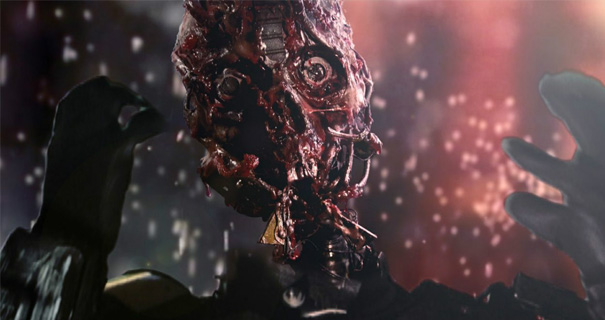 The bad news is that sometime in the near future, the armies of Hell are coming to Earth. Mankind simply does not currently have the resources to withstand their necro-technological might. The seas will run with the blood of billions, and the SuperBowl will presumably be cancelled.

The good news is MANBORG.

A soldier who is mutilated and left for dead by the ravenous hordes of Hell, the hero who will be come to be known as Manborg is reconstituted and outfitted with a cybernetic weapons system powerful enough to turn the tide. He is re-captured by the Hell armies, and forced to fight in an arena alongside a trio of super-powered martial artists — #1 Man, Mina, and her brother Justice — who will become his new friends and help him combat the overwhelming forces of Count Draculon, and at this point I admit I kind of lost the plot, but who cares? MANBORG is so silly it’s beautiful.

This is a real movie I’m describing. I’ve seen it. (Three times now!) It wasn’t a dream. I’m awake, and stone-sober. MANBORG is an actual thing that exists. You can experience it too, and I highly suggest that you do. I can’t answer all of the questions you will probably have. For one thing, the origins of the film remain hazy to me, as if shrouded by Hell-fog or the smoldering fires of an infernal battlefield. IMDb lists the film’s creation date as 2011. It traveled the festival circuit in 2012. It appeared in stores on DVD in 2013, where I grabbed it immediately. Could you resist that poster artwork?

MANBORG was made by a Canadian filmmaking collective known as Astron-6. They’re a bunch of guys who make movies on the cheap, pitching in on each others’ projects in every function including stepping in front of the camera. The director of this particular outing is Steven Kostanski, who shows an impressive command of genre-cinema film-checking. The movie, like Manborg himself, is a lumbering patchwork Frankenstein’s monster of other movies: ARENA, HARDWARE, ROBOCOP, TERMINATOR, TERMINATOR 2: JUDGMENT DAY, MAD MAX BEYOND THUNDERDOME, RETURN OF THE JEDI, HOWARD THE DUCK, ROBOT JOX, DR. STRANGELOVE, THE FIFTH ELEMENT, SAVING PRIVATE RYAN, MORTAL KOMBAT, G.I. JOE, and TRANSFORMERS: THE MOVIE.

To name only a few. If you, like me, spent countless sugar-fueled late nights in front of a TV screen mainlining action movies, you will be in hog heaven with this flick. It’s not quite accurate to say that MANBORG is a snug fit on a shelf with some of the more esteemed films on that list, but it would be absolutely true to maintain that MANBORG completely captures the giddy rhythms of euphoric movie-love. The way you felt when you were talking about these movies, the way you still may feel when talking about them; that’s the spirit in which MANBORG was made.

Another thing about the making of this movie: The production budget for MANBORG was somewhere in the neighborhood of $1,000. That probably wouldn’t even cover the price of the yellow tarp for a Scientology tent on a Tom Cruise movie. It’s hardly any money when you’re talking about mainstream filmmaking. However: In absolute sincerity, I insist that this is incredibly impressive work for that budget. Sure, it’s goofy-looking, but that’s intrinsic to the charm of the thing. It says a lot about these filmmakers that they could stretch the money as far as they do. It suggests that they have a future in so-called serious movies, if that’s what they want, although I kind of hope they don’t. I want to see more movies like this one, although I’m fine with re-watching this one until then.

There’s something fantastically charming about this movie, the way it simultaneously feels like a bunch of film-fanatic friends getting together to make a movie, and still invites just enough suspension of disbelief to enjoy as a somewhat corny, bizarrely sincere addition to the ranks of bizarro action movies. In other words: Even as you know it’s a goof, you still feel like going with it. Because it’s just more fun that way. And I don’t know, man — there’s even something touching to me about the fact that I could walk into Best Buy and see MANBORG sitting on the shelf. Right in between MAGNUM FORCE and MARS ATTACKS! This is one for us. The weird kids. The movie freaks. The up-all-nighters. We made it! Feels like home.

P.S.  Be sure to stay through the credits for the trailer for… BIO-COP!

Read more about MANBORG at the official MANBORG site: http://www.astron-6.com/manborg.html