To celebrate the November 16, 1984 release of A NIGHTMARE ON ELM STREET, Nathan Smith and Brett Gallman are spending every day this week reflecting on Wes Craven’s seminal film and its legacy. In case you missed the previous installments, here is Part One, Part Two, Part Three, and Part Four.

Nathan: Wes Craven’s imprint on horror films and Hollywood was forever changed with the success of A NIGHTMARE ON ELM STREET. Almost immediately, New Line Cinema saw Freddy Krueger as a license to print money and a sequel, FREDDY’S REVENGE went into production and thankfully, with time, has become much more appreciated by fans of the franchise. From that point on, Krueger was as ingrained with ’80s pop culture as MTV was, which is where we saw music videos from artists like the Fat Boys (“Are You Ready for Freddy?”) or an “unofficial” ELM STREET riff from DJ Jazzy Jeff & Will Smith (“Nightmare on My Street”). As the sequels continued to be churned out, one after another, Craven went on to direct a series of misbegotten, under-appreciated horror titles. While Mr. Krueger, not to be contained by the limiting aspects of the silver screen, hit the boob tube in his modestly successful television series, Freddy’s Nightmares—a series which had the right idea, take the denizens of Springwood and let their stories intertwine with Freddy and the various horrors that happen in the suburbs of Ohio. The series to this day is criminally unavailable, unless you’re a cable subscriber or want to dip your toes into the illegal waters of pirated rips on Dailymotion. My digression is, where the hell is the physical media release of Freddy’s Nightmares? There’s some boutique label, like Scream Factory or Warner Archives, that’s talking themselves out of a hefty payday for Fred-Heads everywhere. There was also the phenomenal documentary on the entire ELM STREET franchise, NEVER SLEEP AGAIN, which any fan should, if they haven’t already, hungrily consume. Trust me, you don’t feel that four-hour run-time.

“When the nightmares come to life, the fight for survival begins.”- tagline for BAD DREAMS (1988)

The aftermath of A NIGHTMARE ON ELM STREET could be found elsewhere in the films that were dropped onto multiplexes as the eighties chugged along. There was 1988’s BAD DREAMS, a film that wore its DREAM WARRIORS influence heavily on its sleeve – a burned up maniac haunting the patients of a mental hospital via their dreams? Yeah, Andrew Fleming and 20th Century Fox, I see what you’re doing there. Revenge from beyond the grave by an undead killer, one who operates using nightmarish, psychotronic warfare? That’s Guy Magar’s 1987 Mafia massacre movie, RETRIBUTION, which has a climax that feels like it’s taking place on Freddy Krueger’s battleground. Hell, JASON TAKES MANHATTAN got in on the nightmare craze with its lead suffering from some serious bad dreams starring future Freddy foe, Jason Voorhees.

Arguably, the worst part of A NIGHTMARE ON ELM STREET’s celluloid footprint was its terrible remake in 2010. It’s not to say that any film is above being remade, and filmmakers have made solid remakes out of films considered horror classics, but Platinum Dunes and director Samuel Bayer just took all the life out of the 1984 film and left a hollow core. There’s nothing inventive that the remake does. In fact, it somehow takes the ingenuity of the practical nightmare effects and replaces them with slipshod CGI hocus-pocus, that even Peter Jackson was doing better two decades earlier with THE FRIGHTENERS. None of the mastery is replicated here, just blunt “hey, you’re in a nightmare now!” replacing the subtle unease that you felt when Craven let you in on the fact that Nancy was dreaming. Bayer and his writers (this script is mangled and taped together worse than a dollar bill at a low-rent gas station) fumble the ball so badly here, by wasting an opportunity to do something new with the film. For a long time, I thought that this version would have Freddy be innocent, which would be a great revenge tale and make the evil all the more worse in the film, but nope, he’s still a baddie.

Say what you will about Rob Zombie’s HALLOWEEN remake, he took it to different places (for the first half, anyhow). It also somehow both miscast (Kyle Gallner, Thomas Dekker) and misuses its actors (Katie Cassidy is very good as the “lead”) and just about the only positive thing in the whole film is actor Jackie Earle Haley’s Freddy performance. At this point, griping about the remake and its toxicity amongst horror fans is low-hanging fruit, so I’ll stop while I’m ahead. 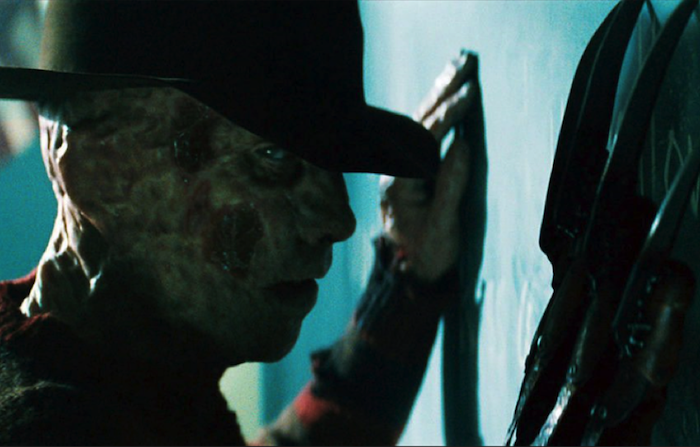 Brett, as we wrap things up, I would love to hear your thoughts on ELM STREET’s long shadow over horror genre, the films that aped its style, and, if you so choose, the remake.

Brett: From a personal standpoint, it’s impossible to overstate the legacy of ELM STREET. Even though I had already stumbled into horror by way of JAWS and the Universal Monsters, Freddy is the one that really sealed the deal and set me on the path to embracing this genre. It wasn’t much longer that I learned about Jason Voorhees, which naturally led me to Michael Myers, and so on. Sure, I guess I would have probably ended up there anyway, but, as much as I love all of the other icons, Freddy has always remained the one. Like most people, I went through phases in my life where I put aside certain things, but I honestly can’t recall a time when this series wasn’t some kind of a fixture. If anything, the obsession has probably only grown with time, and this remains one of the very few series I find the time to re-watch on a semi-regular basis. (To be fair—parenthood makes everything semi-regular)

I think the horror genre at large would have obviously endured; however, it would have lacked the particular flavor that ELM STREET brought in terms of imagination and fantasy, especially the later sequels. Once the franchise really took off and embraced its premise, there was nothing quite like it. In addition to the stuff you pointed out, you could also see its influence in the way Hollywood re-imagined its horror icons. Without Freddy’s outlandish personality, you have to wonder if the likes of Pinhead, Chucky, etc. would have taken off; you also wonder if the franchise’s turn towards comedy didn’t keep the door open for the sillier strain of horror that came to define the latter part of the decade. JASON LIVES definitely nudged that door open, but it was Freddy that blew it down, paving the way for more outlandish stuff that would follow. Also, in terms of slashers, Brian Collins made a good point some years back about how ELM STREET helped to reinvigorate the genre. That had never really occurred to be before, but there’s definitely a distinct dividing line thanks to Craven’s original movie. 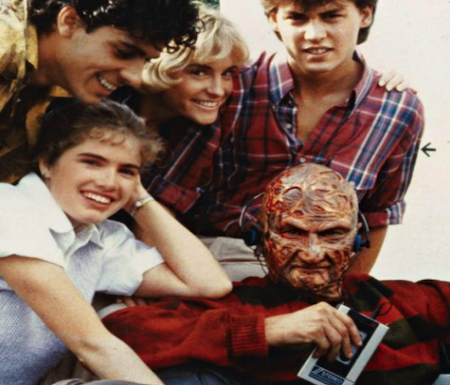 I’d like to say my relationship with the 2010 remake is complicated, but it really isn’t. I was vehemently opposed to its very existence when it was announced back in 2008, mostly because I felt like Englund’s time really wasn’t done yet. Even though it’d been five years since FREDDY VS. JASON, I was adamant that New Line would wise up and follow through on that wink. Once I came to terms that they weren’t going to capitalize on that license to print money, I did eventually hope Platinum Dunes would do the title justice, only to be met time and time again with dispiriting evidence that they really had no idea what to do with it. I’ll never say that Haley was a poor casting choice; however, asking him to essentially do a second-rate Englund imitation definitely was a bad idea. I’ve written at length here at Daily Grindhouse about this and stand by my assertion that the only way to redo ELM STREET is to radically reimagine it in such a way that you’re not compelled to simply think of the original series. The Platinum Dunes movie failed to do that in every way imaginable, right down to recycling dialogue from previous movies. Nice production values, though, I guess.

Look, I could drag that movie for paragraphs at this point, but I don’t think I’d be saying anything that hasn’t already been said for nearly a decade now. Besides, Craven himself offered the best way of dealing with the unmentionable aspects of our lives: simply turn its back on it and take away its power, which it seems like pretty much everyone has done since it was released. At this point, it’s far more productive to just embrace all of the things that make A NIGHTMARE ON ELM STREET great: Heather Langenkamp’s inspirational pluckiness, Robert Englund’s iconic boogeyman, and Wes Craven’s brilliant exploration of the fears lurking at the edges of ’80s Americana. Much of what followed did not exactly live up to its immense legacy (including my beloved Freddy’s Nightmares, which, yes, I would spend dumb money on if Warner would finally release it), but that’s immaterial to the potency of the original film. Even if we never see any kind of continuation with this franchise, I think the title of William Schoell and James Spencer’s 1992 companion book said it best: “the nightmare never ends.”

Mr. Craven, on behalf of a previous generation and a future generation traumatized by your invention of one of horror’s greatest movie villains, we thank you from the bottom of our rapidly beating hearts. 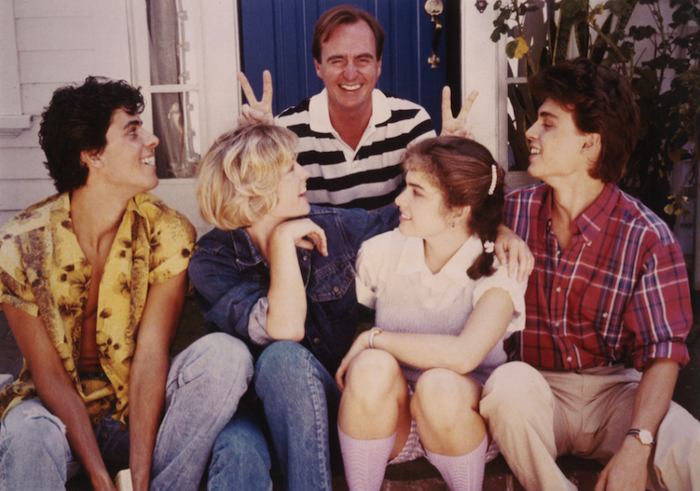 “I don’t know, I always had an active dream life, and there’s something so profound and wonderful about a movie. It’s so alive. It’s so shared. The thing of sitting in an audience and going into a dream-like state with several hundred other people that are sharing exactly what you’re feeling is a profound event.”
– Wes Craven (1939-2015)