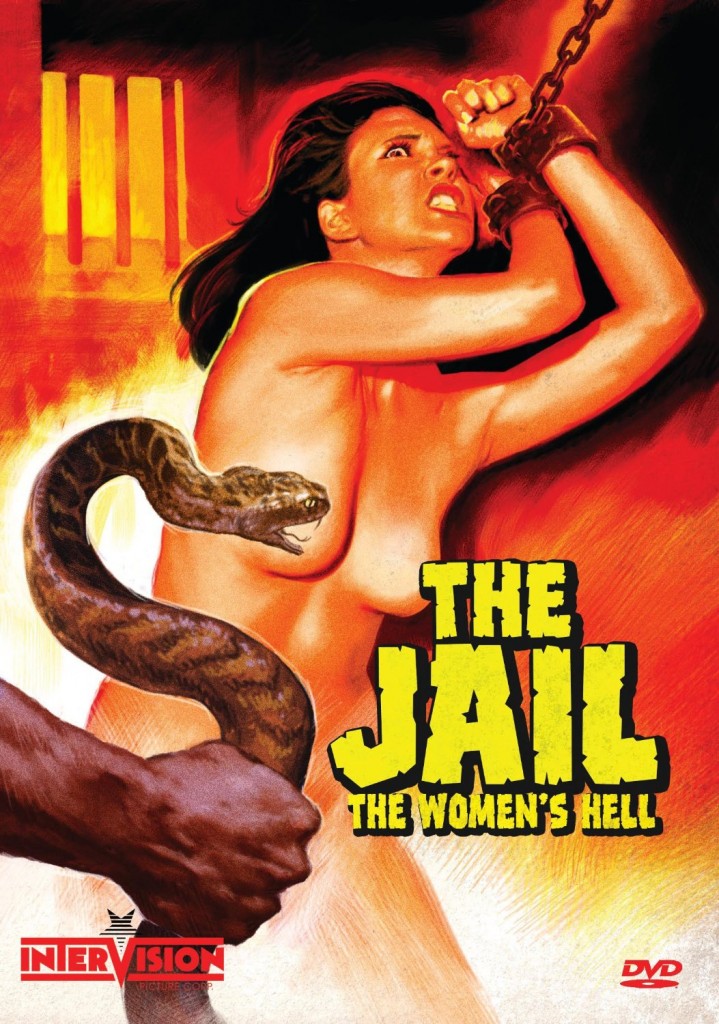 Since last November, Intervision has released four of the last films made by Italian sleaze legend Bruno Mattei on DVD. First up was a pair of cannibal movies from 2004, probably at least in part intended to capitalize on the release of Eli Roth’s THE GREEN INFERNO. February saw the release of two zombie films Mattei made in 2007 just before his death, and now Intervision returns with a 2006 “women in prison” movie that is as generic as its title would suggest. You know everything you need to know about THE JAIL: THE WOMEN’S HELL before you even start watching it.

Jennifer (Yvette Yzon, who also starred in Mattei’s final pair of zombie movies) is taken on a boat with two other women to a remote jungle prison run by a sadistic female warden. Bad stuff happens to them for about ninety minutes. Roll credits. Seriously, that pretty much covers it: Jennifer and her fellow inmates are tortured, beaten, raped, forced into exotic dancing and prostitution at a local club, and more by the warden and her guards. They also have to contend with a snitch who gets them in trouble (triggering more punishment) and survive some epic catfights that break out for no good reason. In other words, if you’ve ever seen a WIP movie, you know exactly what to expect.

Approximately 45 minutes into the movie, a plot line finally appears. Jennifer gets in on an escape plan with some of her fellow inmates. It comes as very little surprise that the plan backfires, though, and the last thirty minutes or so of the film are made up of a protracted woman hunt. Will any of the women make it out alive, or will they suffer a fate worse than death at the hands of the vicious locals? More importantly, could anyone actually care at all what happens to any of these characters?

With the previous Mattei reissues, there was at least some entertainment value in watching him shamelessly ape CANNIBAL HOLOCAUST in MONDO CANNIBAL and James Cameron with IN THE LAND OF THE CANNIBALS (which is ALIENS but with cannibals) and ZOMBIES: THE BEGINNING (which is ALIENS but with zombies). This time around, Mattei is basically just cannibalizing his own 1980s WIP films WOMEN’S PRISON MASSACRE and VIOLENCE IN A WOMEN’S PRISON, which weren’t that much fun the first time around anyway. All the hallmarks of Mattei’s late-period films are here: ugly digital video, atrocious dubbing, and a general feeling that everybody involved is just trying to get this thing over with as quickly as possible so they can get paid already. That can be entertaining in its own right, but THE JAIL is so mean-spirited and misogynist that any sense of fun is drained completely away, and it quickly devolves into a miserable slog.

This Intervision DVD does include a few interesting extras. “Acting for Bruno” is a featurette that includes interviews with Yvette Yzon and Alvin Anson, in which they describe the process of working in front of the camera for Mattei. It will probably surprise no one familiar with his work that it mostly does not sound like a lot of fun. The other featurette, “Prison Inferno,” details the production of the film through interviews with producer Giovanni Paolucci and screenwriter Antonio Tentori. The stories all of these people have about making the movie are considerably more interesting than the film itself.

It’s great that companies like Intervision are out there giving movies legitimate U.S. home video releases, and no doubt Bruno Mattei fans are going to be excited to grab this disc for both the movie and its interesting peek behind the scenes. But unless you’re a diehard fan of WIP movies, THE JAIL: THE WOMEN’S HELL has nothing to offer. It’s the cheapest, laziest, and ugliest kind of exploitation movie, carelessly cranked out to make a quick buck. If you’re not a fan of WIP movies, you’ll probably have as much fun with this one as it looks like everyone on-screen had making it.