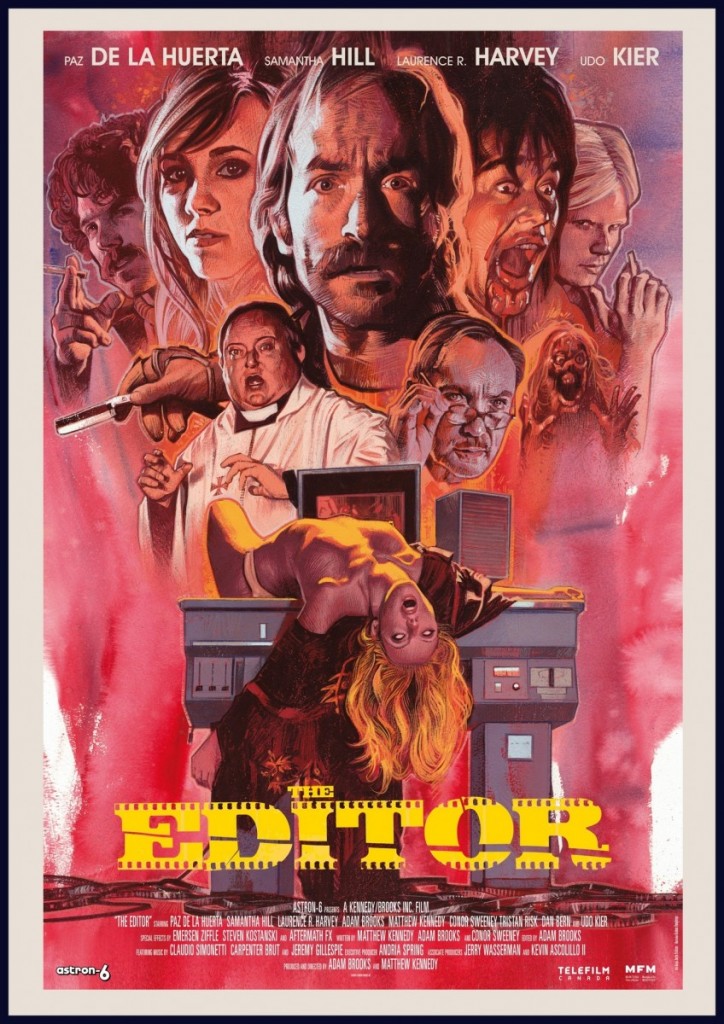 It can be argued that Quentin Tarantino ushered in the era of throwback cinema. With his KILL BILL films (and perhaps  alsohis writing on FROM DUSK TILL DAWN), the director took all of his influences, from the French New Wave to the Shaw Brothers ,to create something that was his own –a heightened version of a low-budget exploitation flick. With DEATH PROOF, his portion of GRINDHOUSE, Tarantino directed a much more faithful version of the Z-grade drive-in picture, while Robert Rodriguez made a movie that lived up to the promise made by so many horror and sci-fi pictures in the late 1970s and early 1980s.

Similarly, THE EDITOR works a heightened version of the giallo films that crowded Italian cinemas (as well as grindhouse theatres in the U.S.) in the latter half of the 1970s, and it also succeeds as a Zucker-brothers parody of them, with subtle humor as well as more than a few over-the-top jokes. There is simply so much love put on the screen from the Astron-6 team: These guys really know the works of Argento, Fulci, and both Bavas inside and out.

THE EDITOR tells the tale of a once great editor, Rey Cisco (writer/director Adam Brooks) who loses his fingers in a horrific accident. Now equipped with a prosthetic, wooden hand, Cisco ends up cutting a trashy giallo at a seedy studio. When the film’s star turns up murdered, Cisco becomes the main suspect. The body count continues and all sorts of weirdness ensue as Cisco attempts to prove his innocence.

What follows is scene after scene paying homage to and making fun of the giallo genre, sometimes at the same time. The plot is a mish-mash of various elements of the Italian films that the Astron-6 team loves — the killer is clad in a black trench coat, there are plenty of black-leather gloves wielding knives, and note the whited out, THE BEYOND-style eyes on Sheila Campbell’s character. The story takes so many left turns that it’s hard to keep consistently aware of what’s going on, but really that’s on point with the actual films (often impenetrable themselves) that THE EDITOR is riffing on.

Adam Brooks is a standout as the titular editor: his portrayal of Rey Cisco is so subtle, it’s hard to tell if he’s deadpanning it or doing a really good job of playing tortured and aloof. Matthew Kennedy’s Inspector character is much more hammy, but his ‘70s-style turtleneck and mustache do most of the work for him. To its credit, the film is laser focused on it’s subject and doesn’t attempt to take on other horror sub-genres (like slashers or possession flicks) in its running time. 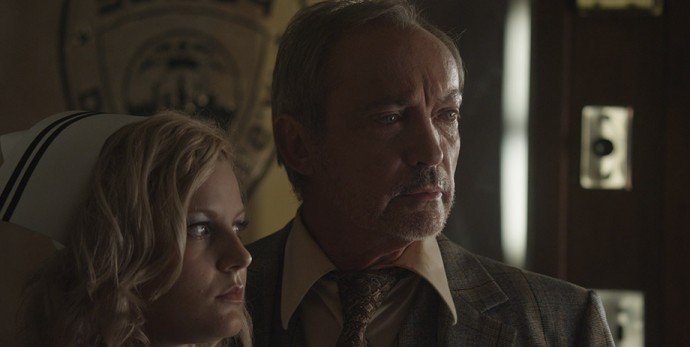 The actresses are all undeniably sexy (including Daily Grindhouse’s own Tristan Risk) with their mod-style dress and big fake eyelashes while the guys are all dressed appropriately skeazy with big collars, bell-bottoms, and exposed chests.  The costuming is right on and the set design and lighting are terrific, particularly for the films especially low budget. There are plenty of fun poster designs haunting the background of each shot of other trashy flicks that the fictional studio has made. The Giorgio-Moroder-meets-Goblin score is the cherry on top.

At its best, THE EDITOR plays like the giallo audiences really want to see, with its quick pace and design. At its worst, some of the jokes fall flat, and there is a terrible line delivered by one of the leads in the confrontation that is maddening. (Writers, just stop ending a hero’s final exclamation to the villain with “bitch.”)

The special features are a joy to watch, particularly for those who fancy themselves  low-budget filmmakers. It’s a real treat to watch behind the scenes footage of a group of people that still have to work day jobs to fund their projects and still need help from their parents. It is quite inspiring. A major Hollywood production this isn’t, and watching the behind the scenes footage will have viewers developing much more respect for Astron-6.

THE EDITOR is a very fun film, and beautiful to look at; unfortunately, as it’s a homage/parody to a very cultish sub-genre, it probably won’t bring much more notoriety to the Astron-6 team outside of their established fan base. It’s obvious that Brooks and Kennedy have the tools and the talent. They have amply displayed their knowledge and love of exploitation cinema, but perhaps on their next project they’ll utilize those influences to come up with something wholly original and perhaps a little bit more serious…more scary, something less of a parody and more in the vein of their own KILL BILL.

Check out Daily Grindhouse’s interview with Adam Brooks by clicking on this sentence!