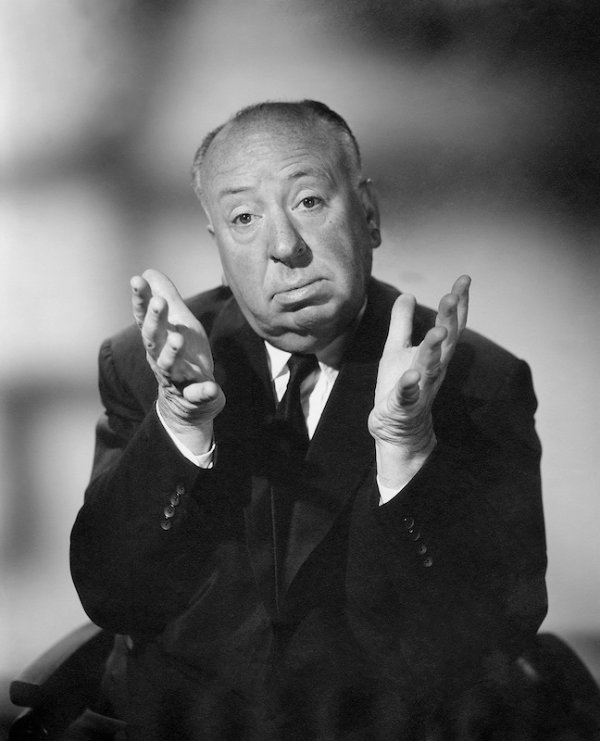 Throughout his career, Alfred Hitchcock directed 55 feature films, along with numerous shorts and documentaries. That’s not a bad haul, nor a bad legacy to leave behind to the world. Having said that, even the most ardent film fan couldn’t possibly name you half of his films in total. In fact, if you look at his filmography starting from the beginning, it would take you seventeen films before arriving at 1935’s THE 39 STEPS, really the first film, chronologically, that still enjoys discussion to this day. I’m not picking on Hitchcock, though – this is more just a reminder of the reality. Not a single director has a flawless track record when it comes to output (and if the names Christopher Nolan or Quentin Tarantino just flashed in your mind as a challenge to that, I’m laughing at you). But by now, Hitchcock has reached legendary status, and not just from the strong crop of films he left behind: there’s his larger than life persona as a morbid spokesman for his work; there’s his reputation for being a hard-nosed director unwilling to compromise his vision; and there’s also his penchant for victimizing his cast for reasons both professional and personal. Because of his infamy, he’s achieved mythic status, and as such, we assume everything he touched shocked audiences, changed cinema, and left an indelible mark. Not quite.

It makes sense then, when it came time to debut some of Hitchcock’s films in the 4K UHD format, that Universal would choose four of the director’s most infamous fright and suspense flicks: REAR WINDOW, VERTIGO, PSYCHO, and THE BIRDS. If you asked that same film fan from before to name ten Hitchcock films, undoubtedly these four titles would be among them. They are sacrosanct, legendary, backbones of their respective genres, and sterling examples of a director fully in control of his talents and resources. And they are the perfect titles to introduce on the newest home video format. 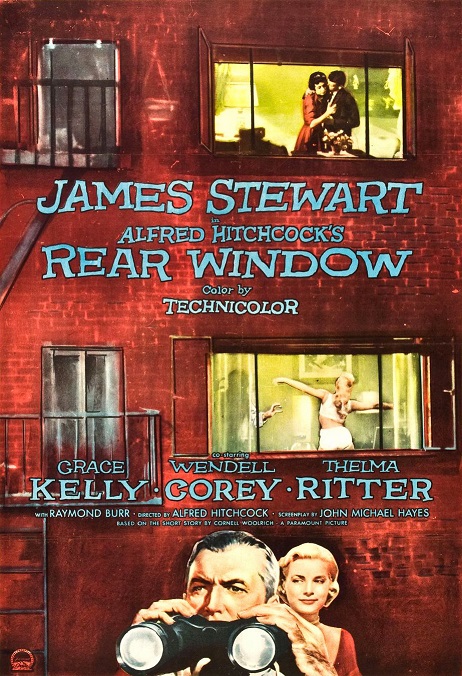 Photographer L.B. “Jeff” Jefferies (James Stewart) is in the midst of recuperating from a broken ankle and is confined to a wheelchair in his apartment. Sheer boredom leads him to watching his neighbors across his apartment complex’s shared courtyard, keeping up to date on the various comings, goings, and personal dramas unfolding in everyone’s tiny homes. It’s through this passive observing that L.B. begins to suspect that one particular neighbor across the way may have murdered his wife. With the assistance of his “girlfriend” Lisa (Grace Kelly), who L.B. uses as a mobile quasi-avatar, they investigate to see if L.B. really does live across the courtyard from a murderer.

Like the other films in this set, REAR WINDOW would inadvertently create an oft visited trope in genre cinema going forward, either through presentation or in conception – in this case, the idea of the voyeur, and of large open windows serving as movie screens that depict the actions of those inside their own bubble, generally unaware of their being watched…or sometimes being complicit in their “performances.” John Carpenter would riff on this concept with a clever reversal in his 1980 television movie SOMEONE’S WATCHING ME! with Lauren Hutton and soon to be wife/ex-wife Adrienne Barbeau. Australian filmmaker Richard Franklin, who would eventually helm the extremely undervalued PSYCHO II, would make a road-set homage with ROAD GAMES , with Stacy Keach alongside a post-HALLOWEEN Jamie Lee Curtis (daughter of PSYCHO’s Janet Leigh). Finally, following his accident that left him paralyzed and wheelchair-bound, Christopher Reeve would produce and star in a REAR WINDOW remake in the late ‘90s for ABC, with Daryl Hannah taking on the Grace Kelly role of the adventurous troublemaker. It was…fine. Also like the other films in this set, REAR WINDOW is one of many Hitchcock films that sees a pretty blonde girl (Hitch’s fave) really going above and beyond to make an impotent or uninterested man commit to her beyond mere petty flirtations and casual trysts. With L.B. prone and imprisoned in his wheelchair, he’s powerless to stop Lisa as she decides to take full control of the situation and break into the suspected murderer’s apartment in order to validate L.B.’s beliefs – and this after the film opens with Lisa basically nagging L.B. to marry her, which he declines with reasoning that makes the very concept sound entirely objectionable despite the fact that he’s twenty years older, has the physique of a snapped rubber band, and he’d be incredibly lucky to have her. 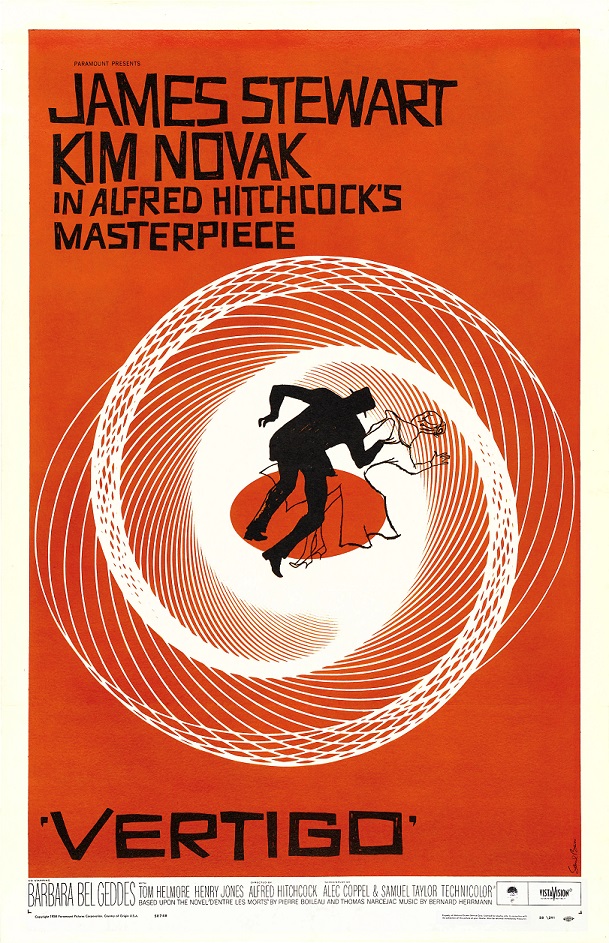 A near-death experience leaves former police detective John Ferguson (a returning Stewart) with acrophobia, a debilitating fear of heights, and very retired. An old acquittance, Gavin Elster (Tom Helmore), hires him out of the blue to follow his wife, Madeleine (Kim Novak), who believes that she’s the reincarnation of another deceased woman named Carlotta. Being we’re in Hitchcock territory, after Ferguson begins his reconnaissance, it doesn’t take long for him to discover, whether or not Elster’s beliefs have any merit, that he’s definitely not on a routine job. And he couldn’t possibly have anticipated how obsessed with Madeleine he would become.

At 130 minutes, VERTIGO is one of Hitchcock’s longer features, and most of that running time is filled with heavy exposition and twisting/turning developments that, at times, feel almost more appropriate for a James Bond caper mixed with brooding noir. Hitchcock once again reigns over his use of cinematography to deeply unsettle his audience, using camera tricks and extreme points of view to take away our balance and feeling of stability. The opening scene has Stewart’s Ferguson hanging for dear life from the top of a very tall building as the gutter he’s grasping slowly tears off the wall, and as a nearby officer reaches down to help him, the poor schlub slips and plummets to his death – in just one sequence, both Ferguson and the audience confront the ultimate fear: not just impending death, but our front-row view of our only salvation being whisked away. (On UHD, VERTIGO’s very first shot and opening credits sequence alone will assure the most persnickety of cinephiles that Universal’s new presentations of these titles are in extremely capable hands.) 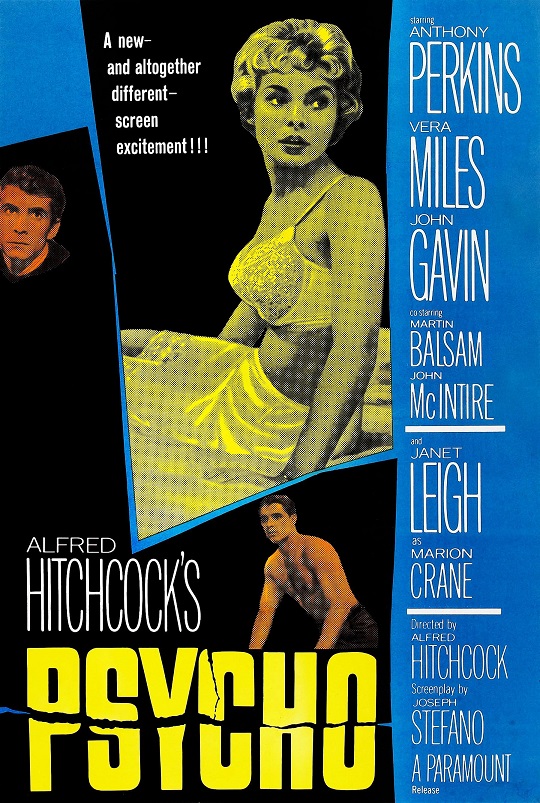 Look, no one needs the plot breakdown of PSYCHO; considering it’s widely considered Hitchcock’s crowning achievement as a director (these things are subject to opinion, of course, but… it is), PSYCHO is a masterclass in filmmaking in just about every way – from expert casting (Martin Balsam!) to maximizing low budget filmmaking (the crew was almost entirely comprised of ALFRED HITCHCOCK PRESENTS personnel) to wrenching tension out of every scene through the use of slow-moving cinematography and off-putting angles. PSYCHO should be taught in film classes exclusively for its use of the camera. There’s the slow opening push into Marion and Sam’s hotel room window (which, while possibly borrowed from 1955’s DEMENTIA aka DAUGHTER OF HORROR, is still expertly crafted), and obviously there’s also that whole shower-scene thing, but my favorite shot comes as the camera slowly pushes in on Norman standing by the side of the swamp and listening in the dark as Sam calls out for him back at the motel. It’s chilling and perfectly engineered. Honestly, I could go on and on about the 1960 classic that inspired four sequels, a (failed) television show, a remake, another successful television show, the next generation of filmmakers (Brian De Palma, John Carpenter, Richard Franklin, Brad Anderson), and a perpetual mark on the genre, not to mention the permanent ruination of the sense of security one feels while taking a shower in a motel room…but we all know this already. Adapted from the novel of the same name by Robert Bloch, Hitchcock and screenwriter Joseph Stefano improve the well written source material in every way. Stefano’s screenplay changes Norman Bates from a monstrous killer to a sympathetic figure, and Hitchcock had the forward-thinking idea of casting someone with charming, boy-next-door features instead of someone who more closely matched the unsightly, stocky, balding, and frustrated virgin present in the novel. Even the shower scene is a complete rebuilding, in which Marion Crane’s demise is limited to a few sentences: “Mary started to scream, and then the curtains parted further and a hand appeared, holding a butcher’s knife. It was the knife that, a moment later, cut off her scream. And her head.” 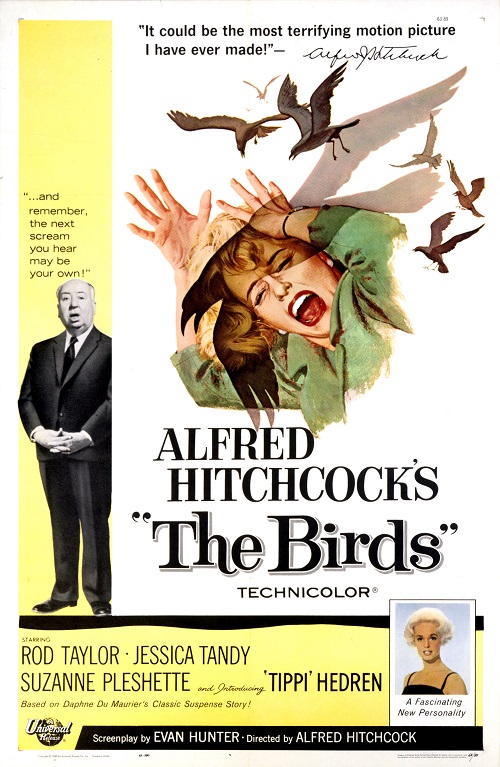 Loosely based on the 1952 short story by Daphne Du Maurier, Hitchcock’s adaption depicts a world being overtaken by angry hordes of birds, atypically flocking together in every species to wage an unexplained revenge against mankind – presumably for being the earth-raping assholes we always are. One of many folks caught in the swarm are Melanie (Tippi Hedren), who’s attempting to charm her way into the life of Mitch (Rod Taylor), who lives in an isolated coastal home. The attacks from the bloodthirsty birds increasingly mount until they find themselves trapped in Rod’s house and fending off the birds that manage to find their way in. Who will survive, and what will be pecked from them?

Truth be told, and in spite of its (deserved) reputation, THE BIRDS is a mixed bag. As a youngin’ obsessed with JAWS and all the animals-run-amok films that it introduced me to, I used to consider THE BIRDS my favorite Hitchcock film, but later viewings re-introduced me to a kind of silly film that’s actually at its best when the birds aren’t on screen (school playground scene notwithstanding, because that’s the kind of thing Hitchcock did so well). However, once the opticals of marauding flocks are overlain into the sky and birds both real and dummy are being thrown into Tippi Hedren’s face, it all seems pretty nonsensical. It’s also hard to mentally dismiss how much Hitchcock mistreated Hedren on set, which was the stuff of Hollywood legend for years before HBO’s THE GIRL made it mainstream knowledge in the earliest beginnings of the #MeToo movement.

Alfred Hitchcock is part of cinema history, taught in universities and film schools, still the subject of modern documentaries like the PSYCHO-deconstructing 78/52, and conjured in the modern descriptor “Hitchcockian.” The four films included in this collection are the top reasons why. Even if Hitchcock had directed over a hundred films throughout his life, the merits alone of REAR WINDOW, VERTIGO, PSYCHO, and THE BIRDS would’ve been more than enough to secure his legacy. Luckily for us, this is just a taste of things to come as more and more titles from Hitchcock’s filmography across other studios (Warners, for instance, has DIAL M FOR MURDER and STRANGERS ON A TRAIN) make their 4K UHD debut. 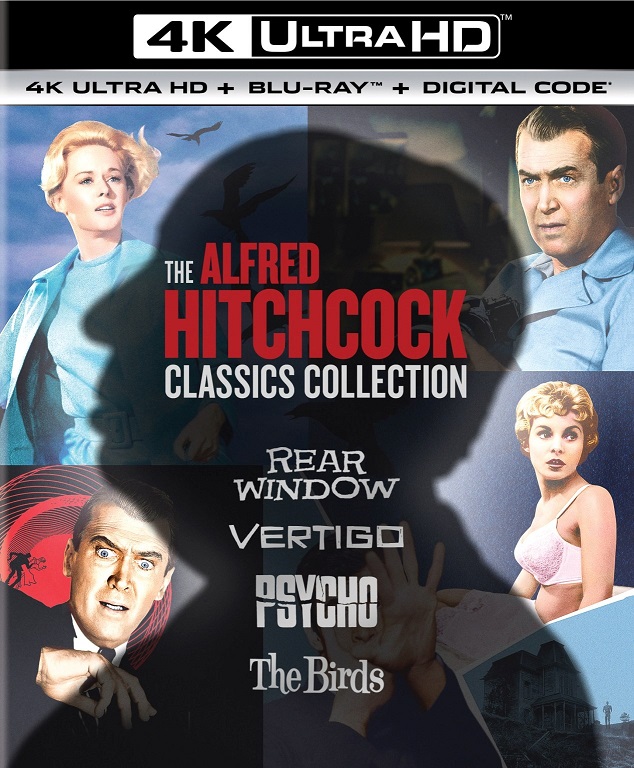