Remakes of John Carpenter’s films so far haven’t really yielded anything considered a total success in that they were both critically and commercially successful. Even though Rob Zombie’s awful HALLOWEEN remake somehow has its defenders, the 2005 remake of THE FOG is universally derided, and rightfully so (and both made obscene money at the box office). Meanwhile, the maiden voyage of the Carpenter remake trend was 2005’s ASSAULT ON PRECINCT 13, directed by French filmmaker Jean-François Richet (the similarly underrated BLOOD FATHER with Mel Gibson) and boasting a pretty excellent cast of Ethan Hawke, Laurence Fishburne, Gabriel Byrne, Brian Dennehy, Maria Bello, Drea de Matteo, John Leguizamo, and lots more recognizable faces. It came and left theaters quickly, doing moderately well with critics, who apparently were the only ones who saw the thing, which is a shame, because—remake of a beloved cult film or not—it’s pretty damn entertaining.

Like any good remake should do, ASSAULT ON PRECINCT 13 takes the basic concept of the original, maintaining the setting, the characters, and the siege-like component, and throws it all into a blender along with some shake-ups to the story. This time, instead of gang members descending on a decommissioned police precinct, it’s a horde of corrupt cops trying to assassinate gang leader Marion Bishop (Fishburne), who has done his fair share of dirty dealings with those cops and has the power to put them away for good—if he survives New Year’s Eve and testifies against them in court. (Bishop was the name of the hero in the original, played by Austin Stoker; though Fishburne steps into the villain role, it’s without the name “Napoleon Wilson,” which I guess didn’t sound as bad-ass thirty years later.) Naturally, once the corrupt cops descend on the police station, which lacks any kind of communication lines since the place is no longer “on duty,” and with a blinding New Year’s Eve snowstorm isolating them even further, the precinct’s cops and crooks must band together if they want to survive the night.

The screenplay was handled by James DeMonaco, who had just written the very successful hostage thriller THE NEGOTIATOR with Samuel L. Jackson and then-beloved Kevin Spacey. Interestingly, DeMonaco would become a force ten years later in Hollywood alongside Blumhouse by writing and directing the PURGE series, which DeMonaco had said from the very beginning was inspired by Carpenter and his penchant for siege and anti-order films. Obviously, the original ASSAULT ON PRECINCT 13 was a very low budget affair bordering on grindhouse cinema, made by an unknown and untested director (who in typical Carpenter style also wrote, edited, and scored the film) and starred a cast of unknown or obscure actors. 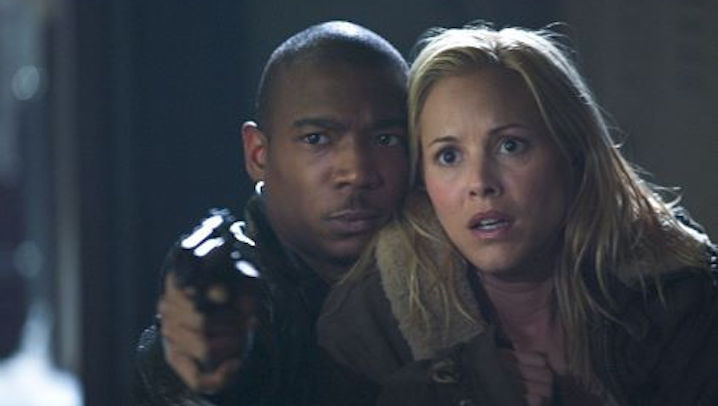 Meanwhile, 2005’s remake is big, glossy, and made with as much spectacle as director Richet can get away with while remaining faithful to the claustrophobic setting. Carpenter has admitted over the years that the original ASSAULT ON PRECINCT 13 was a loose remake/combination of RIO BRAVO and NIGHT OF THE LIVING DEAD, referring to it nearly as a zombie movie, and the redux maintains that same kind of claustrophobic environment where hope for rescue dwindles by the hour.

Appropriately, Richet and DeMonaco are very aware of Carpenter’s overall career as a horror director, even though he’d wandered away from that genre several times to make action-thrillers (ESCAPE FROM NEW YORK), comedies (MEMOIRS OF AN INVISIBLE MAN), dramas (ELVIS), and, as Carpenter likes to put it, “girly movies” (STARMAN). Because of this, even though 2005’s ASSAULT ON PRECINCT 13 is still well within the action-thriller genre, it unfolds almost like a slasher movie, in that several members of its ensemble cast are picked off one by one in violent ways, with many of them not being characters (or actors) you’d ever expect to see bite the big one.

Ethan Hawke jumps from genre to genre as well, never hanging his hat too long in any one place, though he seldom played the role of action hero even in his youth. Besides the terrible GETAWAY and the obscure but decent 24 HOURS TO LIVE, ASSAULT ON PRECINCT 13 sees Hawke in a rare full-on popcorn action role and you can tell he’s having fun with material that doesn’t require as much psychological pathos as the parts he ordinarily likes to play. (He was phenomenal in last year’s FIRST REFORMED, for example.)

Like the geekiest of directors, Hawke respects and enjoys different kinds of films, and he puts in a laudable amount of effort to make his character of Sgt. Jake Roenick more than just your typical apprehensive hero. As for Fishburne as the “bad guy,” well, as most actors will tell you, it’s always much more fun to play the villain, and he knows it, and he does it well. Fishburne’s intensity and swagger has always cast an intimidating pallor over many of his roles, even when playing the good guy, so it’s not exactly necessary to suspend disbelief when seeing him in this kind of role.

Carpenter has been sly over the years when asked for his opinions on remakes of his films, saying that though the remakes were based on his movies, those remakes belong to other filmmakers and it wouldn’t be his place to comment. (Methinks this was mostly his way of having to avoid publicly calling Rob Zombie’s HALLOWEEN a piece of shit considering they were friends, even though he basically did that very same thing later on.) Still, Carpenter had kind things to say about ASSAULT ON PRECINCT 13, saying in an interview, “I thought it was terrific. I thought the cast was sensational. I just loved it.”

He’s not the only one.