GHOSTKEEPER is a tale as old as time—or at least as old as the ’70s, when Canada introduced a tax shelter law to help spur domestic film production. Operating under a safety net that allowed investors to write off any funds used for filmmaking from their taxes, hundreds of aspiring filmmakers wrangled together casts and crews on meager budgets to produce a golden age in Canadian film that launched the careers of Ivan Reitman and David Cronenberg, to name a few. It also introduced the world to Jim Makichuk, to name another, much less prominent character in the Canuxploitation saga.

Armed with an ambitious, killer hook (and, as it turns out, not much else), Makichuk and a ragtag crew went into the wilds of rural Alberta to tackle one of the nation’s most enduring myths: the Wendigo, a creature rarely glimpsed on page (or even print) in 1981. Unfortunately, many would argue that the Wendigo was still underrepresented following GHOSTKEEPER since Makichuk literally didn’t have the money to bring this legend to the screen and wound up producing the kind of Z-grade slasher movie schlock that was quickly becoming routine. 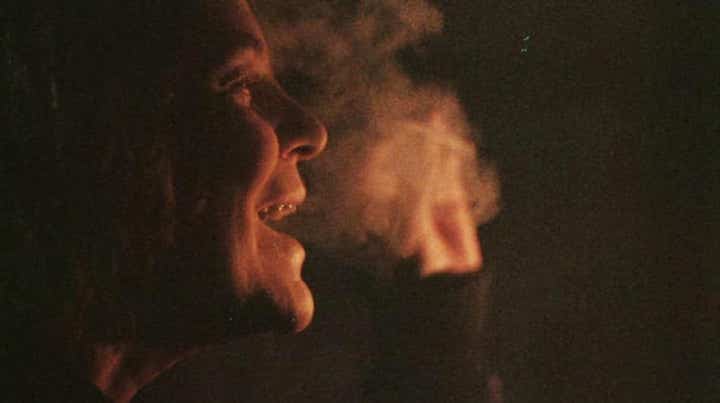 None of this stopped Makichuk from insisting this could be a Wendigo tale, though. An opening title card informs us “in North American myths there exists” such a creature, which is said to be a “ghost who lives on human flesh.” An opening establishing shot introduces us to the desolate Canadian Rockies, where the blinding snow feels less graceful and more ominous as the camera pans about, capturing an scored by howling wind and Paul Zaza’s haunting orchestral strains. For about 3 minutes, GHOSTKEEPER is legitimately evocative with its bleak, wintry ambiance.

And then the movie actually starts. Or doesn’t start, it might be more accurate to say, since even the most charitable viewer would admit not much happens during the first 30 minutes of GHOSTKEEPER. A trio of twentysomethings have ditched their New Year’s Eve festivities (a plot point that is entirely incidental) to plow through the countryside on snowmobiles and hassle a poor clerk at a nearby ski shop. When this becomes boring, they head out into the woods, where they find a random, seemingly abandoned path marked by a “keep out” sign.

Despite the protests of the one smart girl in the bunch, her intrepid companions insist nothing bad can happen, and, abandoning all sense or reason, head right up the mountain. Sitting atop is an empty hotel that these three can’t help but explore for what feels like an eternity. The raging blizzard worsens outside, forcing them to stay within, where they share stories by the fireside until an old woman (Georgie Collins) intrudes and informs them that they’re actually trespassing since she lives here with her two sons. Reluctantly, she allows them to stay, which is totally fine and cool since this kind of situation never, ever ends badly for dopes in horror movies.

The least charitable viewers among us would call pretty much all of this a colossal bore: the characters are duds, and the script doesn’t have them doing much besides wander aimlessly for a good half-hour before some semblance of a plot kicks in. Even then, the story is such a familiar one that it’s hard to get too worked up over GHOSTKEEPER’s riff on the old “kids stumble upon backwoods horror” riff. 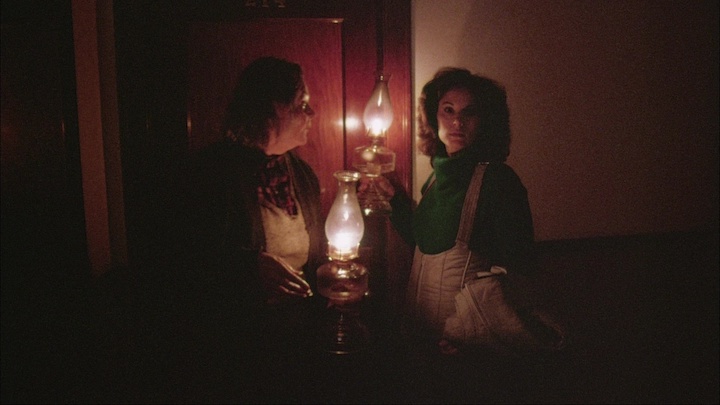 However, this being the holiday season, let’s be a little more charitable. Let’s say that GHOSTKEEPER does have a little bit of that tax shelter charm, that sort of sleepy, je-ne-sais-quoi quality about it that gives the slightest impression of idiosyncrasy despite its familiarity (see also: 1980’s FUNERAL HOME). Let’s say that Collins’s presence introduces a little bit of a mysterious spark since we know this weird crone and her kids are probably up to no good. Let’s definitely say that Makichuk conjures up some great menace from a foreboding, snowbound setting that seems destined to serve a horror classic.

And let’s say hope lurks in the form of the unseen menace, the wendigo that is certainly just waiting to wreak havoc. After all, there’s an entire scene where one of the kids uncovers some ominous literature that speaks of the native legend and insists “no one in the mountains is ever alone.” For another brief moment—and with a little bit of charity from patient viewers—GHOSTKEEPER holds some promise.

But then for reasons—some of them beyond Makichuk’s control, it must be noted—GHOSTKEEPER sort of abandons whatever ambitions it might have had and is content to be another slasher movie. It turns out the unseen menace here is less a mythical creature and more a jabroni in a toque who preys upon his uninvited guests with chainsaws and butcher knives. GHOSTKEEPER promises a wendigo but instead delivers a couple of large adult sons. 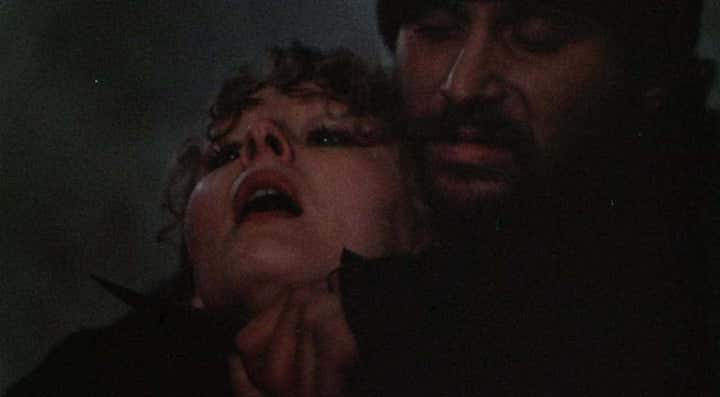 Their carnage is pretty unimpressive to boot and mostly just inspires more aimless wandering once they claim their first victim, whose mysterious disappearance doesn’t inspire much urgency from the two remaining survivors. There’s an entire middle stretch of GHOSTKEEPER that feels as uneventful as the first half-hour, leaving you to marvel at what a missed opportunity it is. You might also rightly wonder why a movie featuring exactly zero ghosts is indeed titled GHOSTKEEPER.

Something strange happens, though, during the climax, when the film begins to unmoor itself from any pretense of coherence. It kicks off with some standard stalk-and-slash, as one of the sons terrorizes our heroine with a chainsaw before the film takes a fairly wild turn down the stretch. The final 20 minutes prove to be a bizarre fever dream of half-assed plot twists and loopy nightmare logic that’s more in keeping with the supernatural aspects that this premise promises. None of it makes much sense, mind you, but you should also consider that Makichuk ran out of money halfway through shooting, forcing him to literally make up the rest of it as he went along. You sometimes encounter movies that feel improvised; here’s one that most certainly was, and it’s both a shame and a delight all at once. 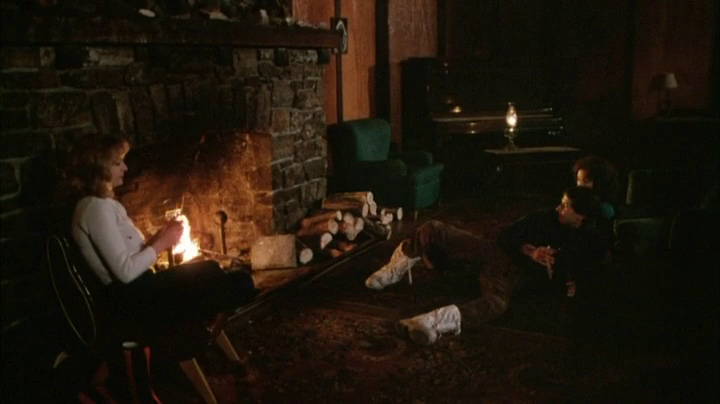 Apparently, Makichuk had dreamed up a much more ambitious finale that would have delivered actual wendigo carnage, which would have been nice, of course. However, I also can’t deny that what he actually delivered isn’t without some merit once Makichuk shifts from visceral to existential horror. For over an hour, GHOSTKEEPER is a barely functional slasher movie with unimpressive splatter effects before it ascends to that weird, distinct plane reserved for total cinematic nonsense. It ultimately belongs to a small, very specific subset of movies that are best watched in the dead of a long winter’s night, when you’re just about to drift off to sleep.

Perhaps only then is its incoherence actually a boon: you almost want to watch this under a haze of near-slumber, so you’re left wondering if the whole thing was actually just some bizarre dream conjured by your weary brain. Then again, those less charitable among us might just argue GHOSTKEEPER is only good for inducing a long winter’s nap—and I’m not sure they’d be entirely wrong, either. 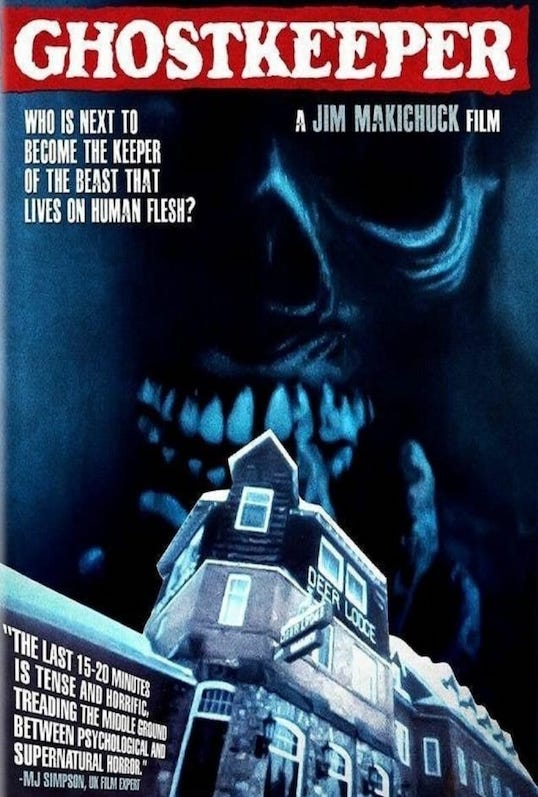